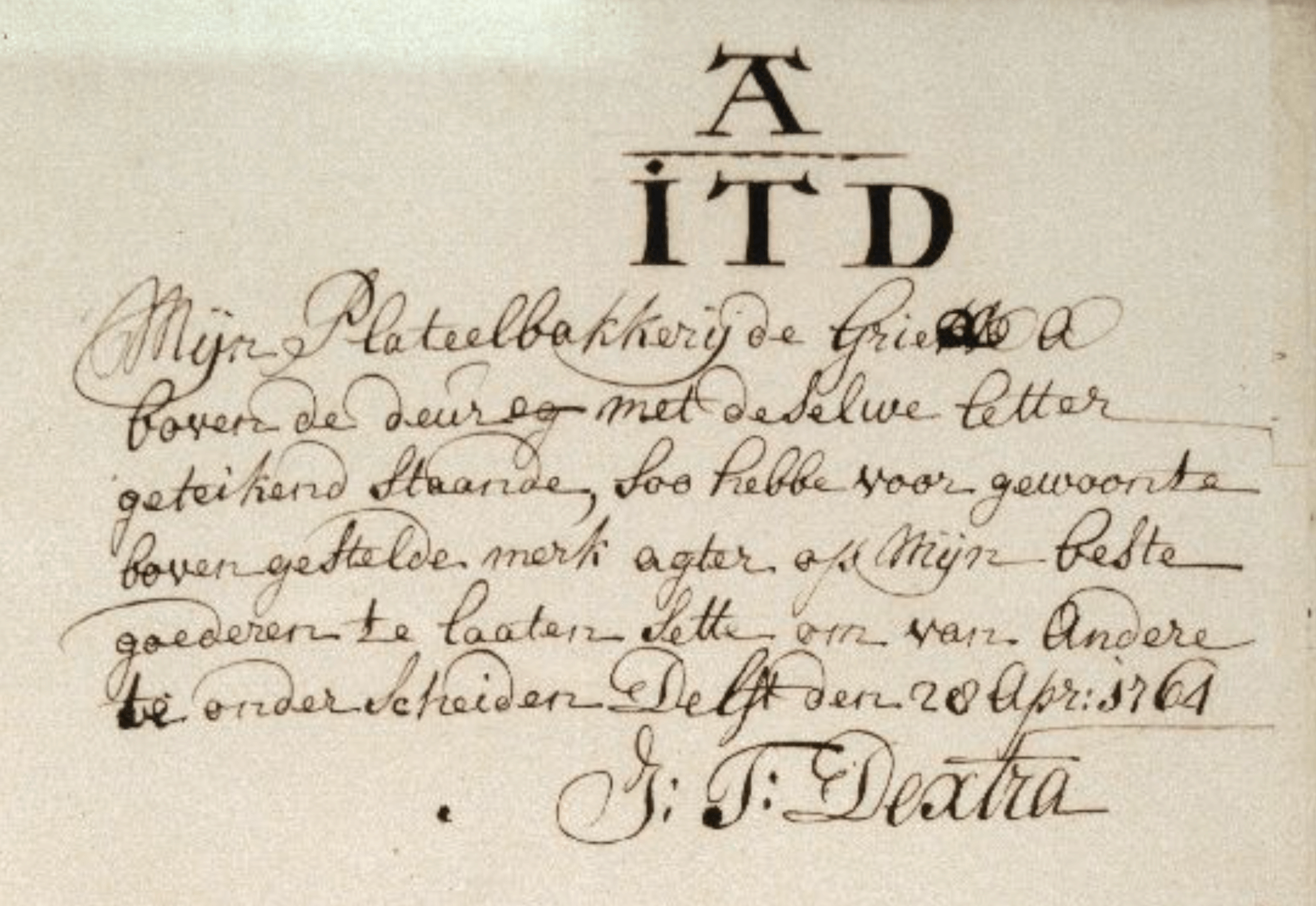 Beginning in the early 1680s, Delft potteries began to mark their wares with either the pottery owner’s initials or the name of the factory. While not every object from this period is marked, it is possible to gain an understanding of the technical and artistic achievements of specific factories based on the marked wares from the late seventeenth and early eighteenth centuries.

Delft potters first marked their wares after a patent dispute between potters Ary de Milde, Samuel van Eenhoorn and the State of Holland. In 1679, Ary de Milde developed a dense, mat reddish-brown body that was ideal for teapots. He and Samuel van Eenhoorn submitted a patent application to the States of Holland for a process described as ‘discovery of the copying and imitation of East Indian teapots, such that the same copied pots need yield nothing in value and worth to the genuine Indian ones.’ The State failed to grant the requested fifteen year patent, but instead gave the potters permission to mark their invention as a form of protection in 1680. Following this example, the State called on all the potteries in the Province of Holland to register their own marks in the event that they wanted to make teapots of this kind. This is the first instance of the registration of marks for earthenware in Delft to protect the products, or to combat the competition.[1]

The marks registration from 1680 was not very important for the Delft earthenware business, since it only concerned the producers of red teapots. Still, more and more objects were marked for the factory where they were produced, often as a symbol of pride. Marks were also applied for economic reasons, especially for foreign trade when the mark was a means of recognition and quality assurance, comparable with the modern trademark. The marking of objects contributed significantly to the flow of these goods abroad. According to Justus Brouwer, factory owner of De Porceleyne Byl (The Porcelain Axe), foreign clients ordered objects branded by certain potteries, without knowledge of the specific factory owner.[2] Since the pottery trade generally ran through merchants and shopkeepers, these trade contacts and their customers could not verify the origin of the objects. Therefore it was important to be able to determine at which pottery the object was made. The mark guaranteed the origin and the quality of which the pottery was known for.[3] However, there are many beautiful unmarked objects, while many objects of lesser quality are marked.[4]

Despite the regular application of factory marks, the industry was largely unregulated and many marks were plagiarized.[5] Justus Brouwer complained that other factories copied his mark during the mid-eighteenth century. In 1764, the Delft city council decided that the 23 existing earthenware factories were required to register their trademarks. The counterfeiting or otherwise abuse of these marks was prohibited under penalty of high fines and forfeiture of the objects in question. This was in fact the first mark registration for the entire Delftware pottery industry, which resulted in the 1764 book of marks. The book contains invaluable information, including the description of factory billboards and other advertising materials. The book also shows that a great variety of marks were used, and remains the only known general trademark registration for the Delft pottery industry.

Although it is often misunderstood, Delftware painters did not sign their work. The marks on the bottom or reverse referred to the factory name or the master of the shop who was a registered member of the Guild of Saint Luke.[6] Despite the necessary skills of the workers, the decoration of earthenware was regarded as a craft industry and the workers were not usually considered artists.[7] There are a few exceptions to this, including the renowned painter Frederik van Frijtom, who signed his work on the front.

A combination of letters and signs is also possible. Objects that were produced at De Witte Starre (The White Star) factory often bear a six-pointed star or asterisk mark, sometimes accompanied by the initials of the factory owner. For example the mark used during the ownership of Albertus Kiell from 1762 to 1774 is the combination of the letters AK and an asterisk. The same applies to objects produced at De Grieksche A (The Greek A) factory from the second half of the eighteenth century. These objects often bear the initials of the owner and the letter A for the factory. During the ownership of Jacobus Halder from 1765 to 1768 the objects were marked with the letter A and the letters J H, and during the ownership of Jan Teunis Dextra from 1757 to 1765 the objects were sometimes marked with the letter A in combination with his initials ITD.

Most marks, however, have never been officially recorded. The Frenchman Henry Havard was the first to conduct a systematic research based on archival sources. He published his findings in Histoire de la Faïence de Delft in 1878. However, Havard’s attribution of marks based on archival sources was not supported by style connoisseurship. This resulted in some confusing and erroneous conclusions. In the second half of the twentieth century, other scholars and museums conducted historical research into the marks based on a combination of archival data and style criticism. This contributed to a good overview of the potteries, their assortment and stylistic characteristics.