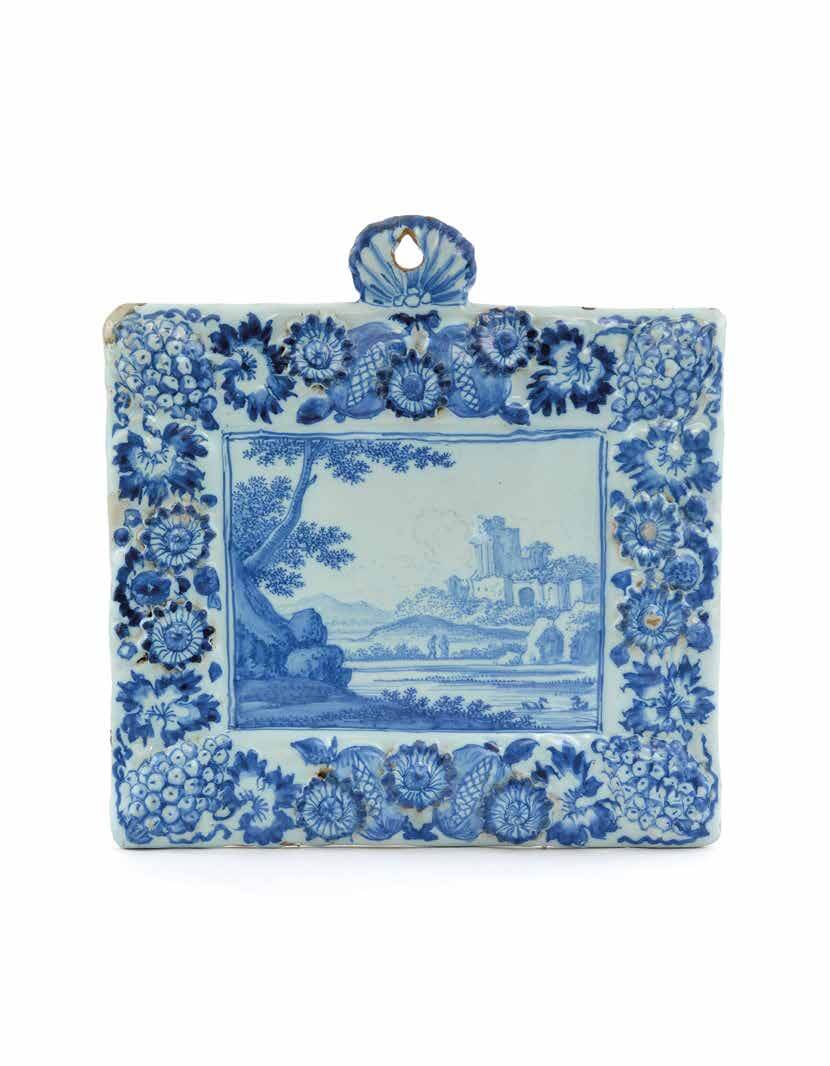 Delftware painters were among a highly esteemed group of craftsmen, whose expertise and creativity determined the look of the finished earthenware pieces.[1] Unfortunately, many of their names have been lost throughout history because they did not sign their work and the records for the potteries refer almost exclusively to the factory owners. One rare exception is the painter Frederik van Frijtom (circa 1632 – 1702), whose extraordinary oeuvre merits the acknowledgement he received during his lifetime.[2]

Holland’s most renowned painter of seventeenth-century Delft faience, Frederik van Frijtom, was born as Frederik Barents(z). Frederik Barents is listed as a faience painter as early as 1653 when he was just circa 20 years old.[3] The origins of the Van Frijtom name are unknown, as it is unfamiliar in the Dutch language and has no occurrence outside Delft at this time. Only Frederik and his sister Martha used the name, starting sometime between 1657 and 1658. The name Van Frijtom, recorded with various spellings, replaced the patronymic ‘Barents.’ The painter may have adopted the unusual name to distinguish himself as an artist, dropping the common surname.[4] 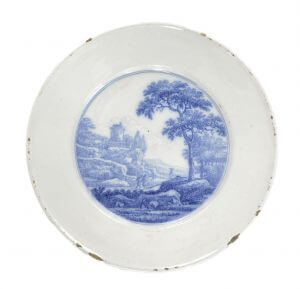 Van Frijtom trained to be an easel painter, but he primarily painted earthenware, translating his drawings of the Dutch countryside onto faience.[5] Interestingly, Van Frijtom was one of the rare independent pottery painters in Delft. He received the guild’s permission to work on his own, rather than being employed by one of the potteries. This permission was only granted to artisans who were disabled, who could only work in the privacy of their own studio, or who possessed technical secrets. However, he is recorded in the inventories of De Metaale Pot (The Metal Pot) factory owned by Lambertus Cleffius from 1679 to 1691. Frederik may have paid for (production) capacity in the factory, presumably for his own works.[6]

Van Frijtom mainly worked on tile plaques, dishes, and plates, with only a few known exceptions that include a small signed jug, an unsigned bread basket and an unsigned cruet-stand. Although most of his works are unsigned, he occasionally signed and even dated a piece, enabling scholars to identify his unique style. He painted in a monochrome blue palette, often leaving large areas undecorated. The areas of white in the borders of his painted objects draws emphasis towards the depth and suggestion of light in his serene, pastoral paintings.[7] Van Frijtom was also responsible for the clay model in addition to his painted decoration. This was an unusual practice for many factories, where an object was typically potted and painted by different craftsmen. However, Van Frijtom was a meticulous craftsman, who was aware that the slightest imperfection in the clay or in the paints would spoil the total effect. As such, it is unlikely that he allowed others to prepare his raw materials unless they were completed under his direction within his own studio.

The blue and white rectangular plaque, from circa 1680, is attributed to Van Frijtom based on its rare painting technique that many regard as his ‘signature’. The pastoral landscape scene, within a frame of two concentric lines, is painted with various shades of blue, using fine outlines and thousands of minuscule dots. Furthermore, the landscape is painted to suggest a sense of depth and space. Typical of Van Frijtom’s oeuvre, the foreground, depicting trees, shrubbery or rocks, is painted in a dark blue that contrasts with a much lighter background, where the hills are represented in an almost vanishing blue. Aside from the characteristic color palette, the subject of the composition is similar to other pieces painted by Van Frijtom, with an architectural ruin atop an overgrown hill, and two insignificant figures walking along the river bank amongst the grandeur of nature. There are about fifty known plaques attributed to Van Frijtom, some of which are signed, but most are not. 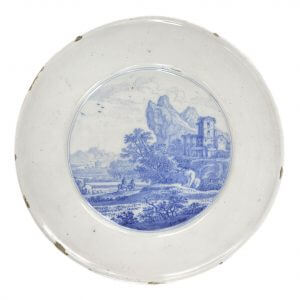 Van Frijtom used extraordinarily fine and pure clays that he blended himself. By washing and sifting them over and over again, the impurities and foreign bodies (such as mineral residues, plant fibers and coarse particles) disappeared.[8] After kneading the clay, he threw the plates and dishes on the wheel to prepare the first firing. The resulting biscuit ware was still absorbent, and was then covered with several layers of tin enamel. This method, which was named ‘dubbel wit’ (double white), produced the beautiful white color of the objects. The blue decoration was then applied with wet pigments on the unfired and thus absorbent, powdery and fragile layer of tin enamel. This meant that no alterations were possible, since the porous ground would immediately absorb every touch of the brush.[9]

These two Delft plates from circa 1680 display characteristic details of Van Frijtom’s painting style. With broad white borders, a result of the double white method, the attention is drawn towards the depth and light of the blue and white landscape scene. In a manner unique to Van Frijtom, he painted landscapes with various shades of blue, using fine outlines and thousands of minuscule dots. His precise landscapes were strongly inspired by the etchings and drawings of artists who undertook the Italian Grand Tour. They show, rather symbolically, the traces of mankind amongst the grandeur of nature. Van Frijtom’s landscapes are composed from several different planes and scenery to create the suggestion of space. Often, the foreground is painted with a tree or shrubbery using small pointillist touches, with ancient ruins or buildings on a hill in the distance. In between these scenes, small and graciously draped figures are passing through the landscape by foot or horse. By painting the hills on the horizon in a very light, almost vanishing blue, he achieved the unusual sense of depth in this panoramic hill landscape. These two plates fit so well within his oeuvre that they can be attributed to Frederik van Frijtom with certainty.