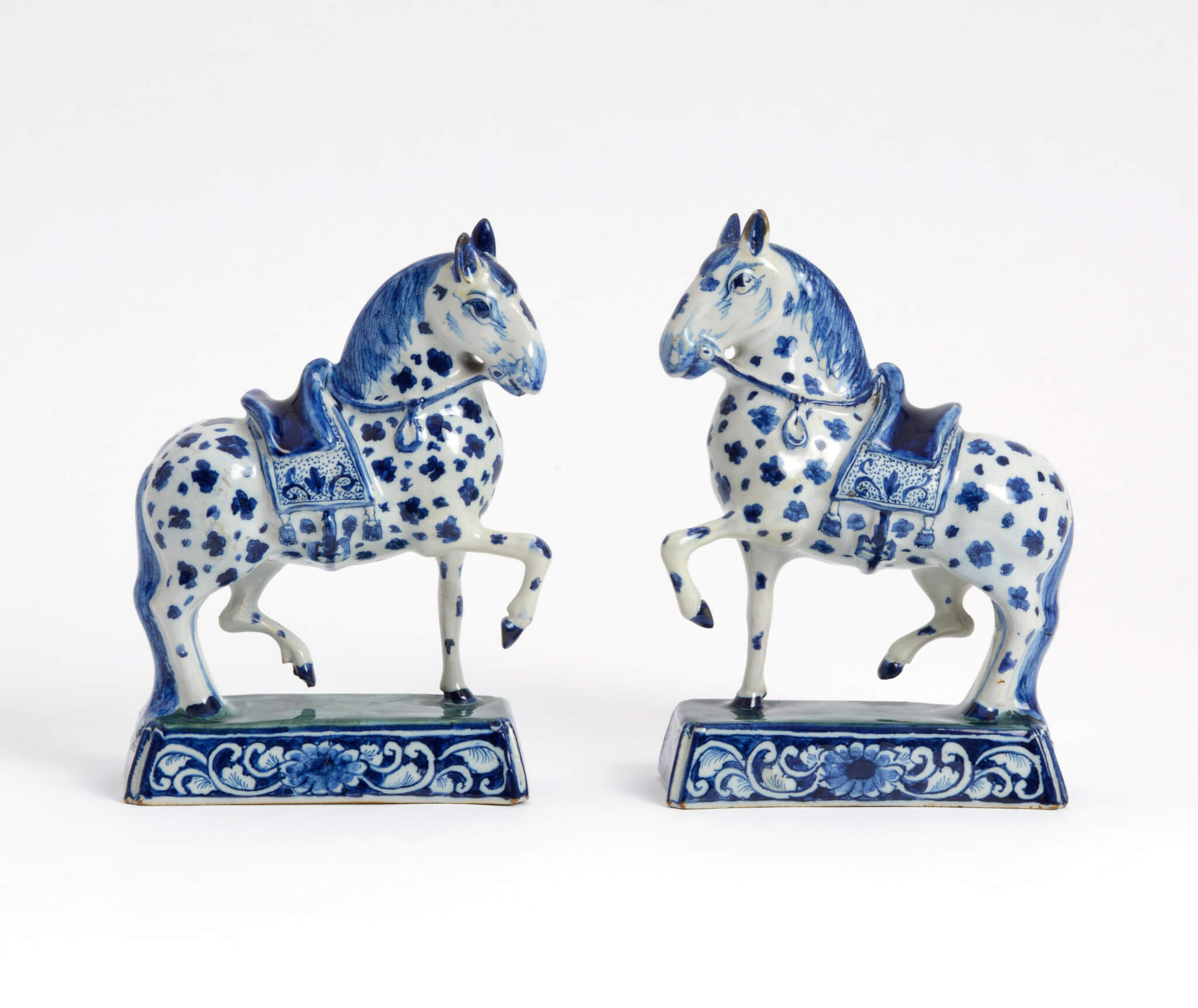 De Porceleyne Schotel (The Porcelain Dish) factory is one of the oldest, if not first Delftware factories that existed. The journey began in 1598, when Egbert Huijgensz. Sas bought a factory that consisted of a house and yard. [1] De Porceleyne Schotel factory first produced majolica wares that were decorated with European motifs. By the early seventeenth century, Chinese porcelain was introduced to the Netherlands and transformed the Delftware industry. The importation of Chinese goods was probably first viewed as a threat to the local ceramic industry. However it certainly encouraged the factories to innovate and develop new wares to compete with Chinese porcelain.

De Porceleyne Schotel factory succeeded in their experiments to develop new wares that were similar to the newly imported Chinese porcelain. An altar vase dated 1626 is the earliest known piece displaying chinoiserie motifs. This group, which also includes a salt cellar and two jugs was ascribed to De Porceleyne Schotel factory. Based on this, other pieces such as the illustrated jug, can be attributed to the same factory.[2]  In support of the circa 1640 dating of these jugs, Van Dam ibid., pp. 9 and 10, pls. 6-8, illustrates similar examples appearing as prominent elements of mid seventeenth-century Dutch still life paintings by Michiel Simons (1620- 1673) and by Jan Steen (1626-79) (‘Het dokterbezoek’ and ‘Het oestereetstertje’), both in The Mauritshuis, The Hague.

Crucial to the development of Delffse porceleyne (Delft porcelain) was Willem Jansz. Verstraeten, who was hired in 1613 by Hans Willemsz. de Wint, the second owner of the factory.[3]  Willem Jansz. Verstraeten was the son of the Antwerp merchant Jean de la Rue, who later adopted the name Jan Verstraeten and settled in Haarlem in 1590.[4]  His father sent him to Delft, where Willem worked as an assistant and later as manager of De Porceleyne Schotel factory. Willem was an exceptional asset for the company; when the factory passed on to the hands of Gerrit Pietersz. Durven and later his wife (Elisabeth Cornelisdr. Suycker), Willem’s contract was renewed. The archives show that his salary was five guilders and ten pennies a week, a wage that was comparable with that of a master carpenter. A contract with the factory stipulated that Verstraeten had to share any new discoveries uncovered during his employment with the factory owners. In January 1625 Verstraeten and the factory owners applied for a patent for a method of pottery-making.[5]  The patent did not go through as planned, because Verstraeten established his own pottery in Haarlem in the same year.

In 1647, he sold the factory to Dirck Jeronimusz. van Kessel. The company was purchased a few months later by the investor Gijsbrecht Lambrechtsz. Cruijck.[7]  At this point, the factory had grown from a simple house and a yard to an entire row of houses, a pottery, sheds and yards. The company also had two mills and its own clay washery, which was located in the east side of the city.[8]

A document drawn up after a fire inspection in 1668 offers insight regarding the factory’s production and success. This document records three kilns at De Porceleyne Schotel factory, which was a rare occurrence in the Delftware industry. The factory must have had an extensive and successful production to maintain such an elaborate facility.[9]

Around 1671 De Porceleyne Schotel factory was bought by Elisabeth Willemsdr. Vos who entrusted her son-in-law Jacobus Pijnacker at the management of the company. In 1675 he received one quarter of the company and 1686 he took over the entire business.[10]

In 1694 Jacobus Pijnacker divided the company into two different entities and relocated De Vergulde Blompot (The Gilt Flowerpot), a factory that he had previously acquired, in one of the two sections.[11]

In 1724, Rotterdam native Jan Pennis bought the successful De Porceleyne Schotel factory and ran the business for forty years. The mark of Pennis, his entwined initials IP, is the first known mark of the factory. Pennis had a number of important roles in the Delftware industry. He was the head of the Guild of Saint Luke, a professional trade organization for artists and artisans that regulated the commerce and production of potters, engravers, glass makers, tapestry weavers, faiencers, booksellers, sculptors and painters alike. The factory owner was also a member of the Kamer van Charitate (Chamber of Charity).

Pennis specialized in the production of pharmacy and tobacco jars, as well as very delicate human and animal figures. Several known figures include musicians, mythical and religious characters such as this beautiful group of the Madonna and child. Possibly the model of the present figure was developed under Jan Gaal but at a later date came into the possession of Jan Pennis. His son, Anthonij Pennis, was one of the later successors of Jan Gaal, as owner of De Twee Scheepjes from 1750 to 1770 (Pennis’s widow continued the ownership until 1782), and his production assortment also included many figures.

Pennis also produced plates containing moralistic messages and song lyrics. Jan Pennis managed to keep the company successful through the difficult years of the 1730s and 1740s. In 1750 he acquired the factory De Twee Scheepjes, possibly with the intent to pass it on to his son. Fourteen years later, he sold De Porceleyne Schotel factory to Johannes van Duijn.[12]

The last owners of De Porceleyne Schotel were father Johannes and son IJsbrand van Duijn. Johannes van Duijn registered his mark, IVDuyn, in 1764 at the Delft city council. According to Havard, Johannes probably marked most of his pieces as many objects bear witness today.[13]  The objects produced during this final stage were mainly polychrome rond de bosse figures of an exceptional richness. This pair of polychrome figures of prancing horses is a wonderful example. This model relates to the arrival of the first modern circus in Holland, a novelty created by Philip Astley, an English sergeant who showcased his horse riding skills inside a large arena. At the death of his father, IJsbrand took the lead of the company and adapted the mark of his father to his own name by changing the first letter for IJ (IJDuyn). Shortly after he took control, IJsbrand associated himself with the owners of De Drie Posteleyne Astonne, De Lampetkan and De Drie Klokken and bought the mill De Pauw.[14]  IJsbrand was also a Delftware merchant and shipped some of his merchandise abroad, with some records indicating clients in South Africa.[15]

[3] In the archives his name is mentioned in the year 1613 as an assistant and in the year 1617 as an contractant of the factory. It is likely he worked there for these three years and possibly longer. C. Lahaussois (ed.), Delfts aardewerk, Amsterdam 2008, p. 33.