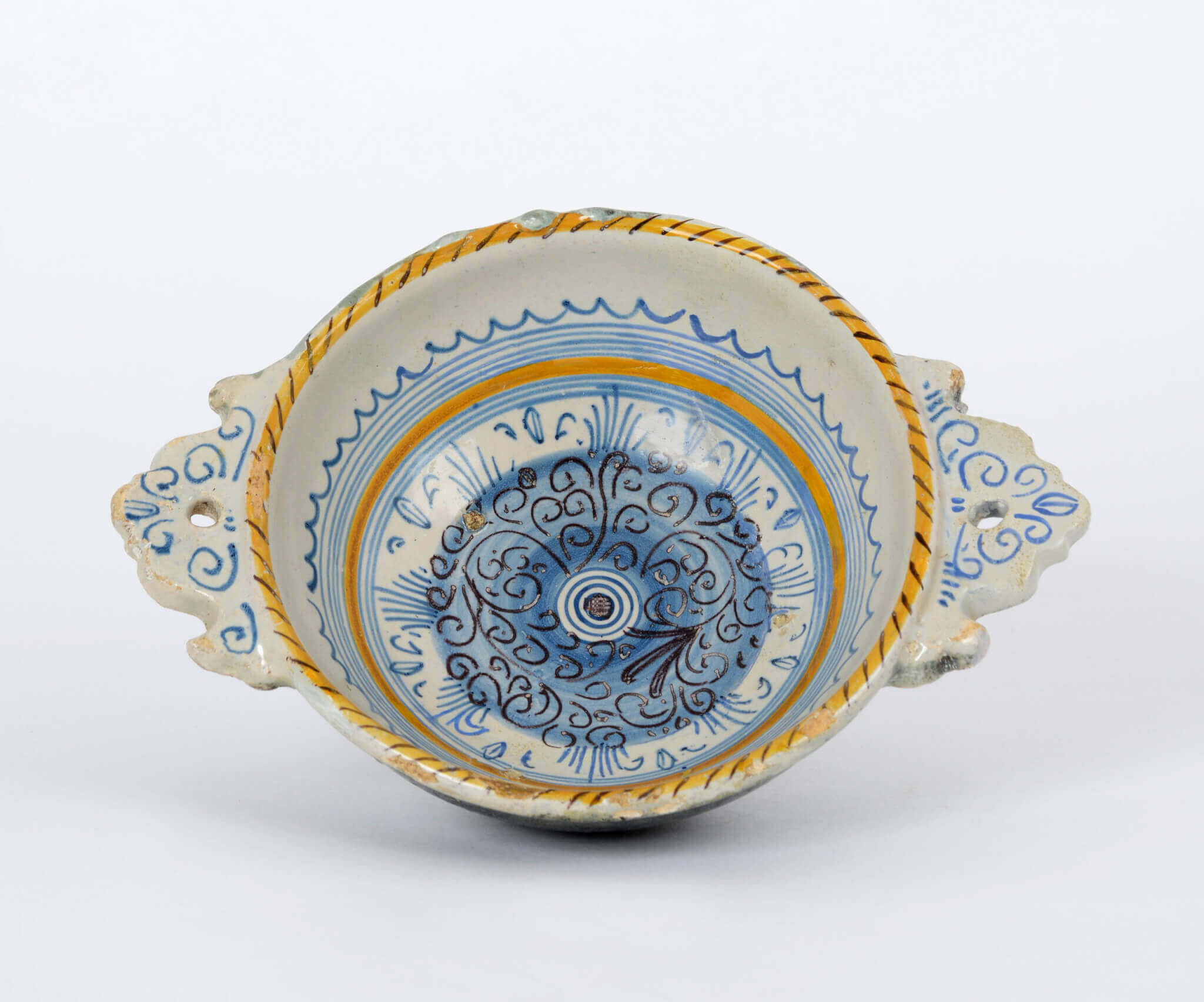 The Delftware industry originated in the early fifteenth century when Dutch potters were first introduced to maiolica (or majolica). The high quality ceramics were imported to the Netherlands from various cities in Italy and Spain, and Dutch potters began to emulate the wares for their own market.

One of the most renowned Dutch families to produce wares in the maiolica tradition was the father and son Willem and Gerrit Verstraeten from Haarlem. Starting in 1613, Willem was sent to work for De Porceleyne Schotel (The Porcelain Dish) factory.1 Along with De Lampetkan (The Porcelain Ewer) factory, De Porceleyne Schotel was among the innovative factories to develop the technical properties of ‘Delft porcelain.’

In 1625 Verstraeten left De Porceleyne Schotel to establish his own factory in Haarlem. A quarrel in 1642 between Willem Jansz. Verstraeten and his son Gerrit split the market. The elder Verstraeten continued making the old-fashioned majolica such as the present polychrome bowl and the son ventured into the more modern faience, which was more thinly potted and bore a closer resemblance to the imported Chinese porcelain wares that were becoming so sought-after.2

The newly created ‘Dutch porcelain’ market was thus dominated by three factories: De Porceleyne Schotel owned by Elisabeth Cornelisdr. Suycker and Hendrick Marcelisz. van Goch; De Lampetkan led by Cornelis Harmansz. Valckenhoven; and the pottery of Gerrit Verstraeten. To preserve their monopoly over the market, the three factories signed a restraint of trade agreement, in which they agreed on paying their employees the same wage, for example.3 Despite this contract, their hegemony was short lived.

In the beginning of the seventeenth century, the Dutch developed a dominant role in the trade industry between China and Europe. The Dutch imported large cargoes of luxury Chinese goods, including the coveted blue and white porcelain. By the middle of the century, however, production and exportation of Chinese porcelain to the Netherlands was interrupted by a war in China. To fill the void in the market, Dutch potters seized the opportunity to produce earthenwares in emulation of Chinese porcelain. The once-protected Delftware recipe of the three major factories was now discovered by other potters, who marketed their new wares as ‘porcelain.’

The complex production of Delftware quickly became a thriving industry. Factories included at least one kiln, an attic where the objects would dry, warehouses, sheds, a house where the manager would live and a shop. The production of Delftware also necessitated a clay washery and a paint-mill, which were often subcontracted by the factory owners. The operating costs to run a factory were high. Not only was the raw material expensive, but also the hiring of specialized workers to operate the multiple production processes was costly. Staff included people who would wash, weather and knead the clay, craftsmen-throwers who would shape the piece on the wheel, glazers, workers responsible for the firing, painters and many more.4

The purchase of Delftware factories proved to be an important investment. In the second half of the seventeenth century, many wealthy outsiders recognized the investment opportunity in the Delftware industry and purchased shares of one or several factories. The high costs meant that factories were often owned by several individuals, many merely acting as participants with little influence over the operation.

The number of Delft factories significantly rose; in 1640 there were eleven potteries, and by 1670 there were twenty-eight. Many of the new players originally had no connection to the ceramic industry, and often did not even practice the potter craft. For example, Jacob Wemmersz. Hoppesteyn, owner of Het Moriaenshooft (The Moor’s Head) was a cooper, while Lambrecht Gijsbrechtsz. Cruijck who bought De Dissel (The Pole) in 1640 was originally a businessman. However they had enough money to encourage experimentations and push innovations. With the influx of money and inventiveness, the Delft factories were able to produce some exceptional masterpieces in high quantities, and rapidly became one of the leading ceramic centers in Europe.5

Like the other crafts, the Delftware industry was closely protected and supervised by the Guild of Saint Luke. Self-employed pottery owners were required to obtain the title of master from the Guild. This level of mastery was ensured by a compulsory master’s test and an additional financial contribution. For owners who were not able to secure this title, a graduated supervisor who had obtained the mastery title could be nominated to head the company.6 For example, many of the new investors with no pottery experience did not become masters, but the title was sometimes acquired by a member of the family. At De Metaale Pot (The Metal Pot), for example, Willem Cleffius was the official owner, but his son who had passed the master’s test in 1667, was probably leading the day- to-day operations.

Rapidly, this new generation of Delftware owners and their descendants overtook the whole industry. The two most important dynasties were the families of Lambrecht Gijsbrechtsz. Cruijck and Jacob Wemmersz. Hoppesteyn. Lambrecht Gijsbrechtsz. Cruijck had at least three children who either bought shares in other factories or married other factories owners. Thus, his son Gijsbrecht Lambrechtsz. Cruijck owned De Porceleyne Schotel, De Dissel, De Witte Ster (The White Star) and De Paauw (The Peacock). His daughters married Wouter van Eenhoorn, who owned or had shares in De Porceleyne Fles (The Porcelain Bottle), De Grieksche A, De Paauw, De Drie Posteleyne Astonne (The Three Porcelain Ash-Barrels) and Het Hooge Huys (The High House); and Willem Cleffius who invested in De Witte Ster, De Paauw, Het Hooge Huys and De Metaale Pot. Their children then reproduced the same scheme and until around 1720, they had a quasi-monopoly over the industry. The Hoppesteyn family was equally prosperous, and had interests in the successful factories of Het Moriaanshooft, De Lampetkan, De Drie Porceleyne Flessies, and De Porcelyne Byl (The Porcelain Axe). One must only imagine the difficulty for a newcomer to penetrate this market.