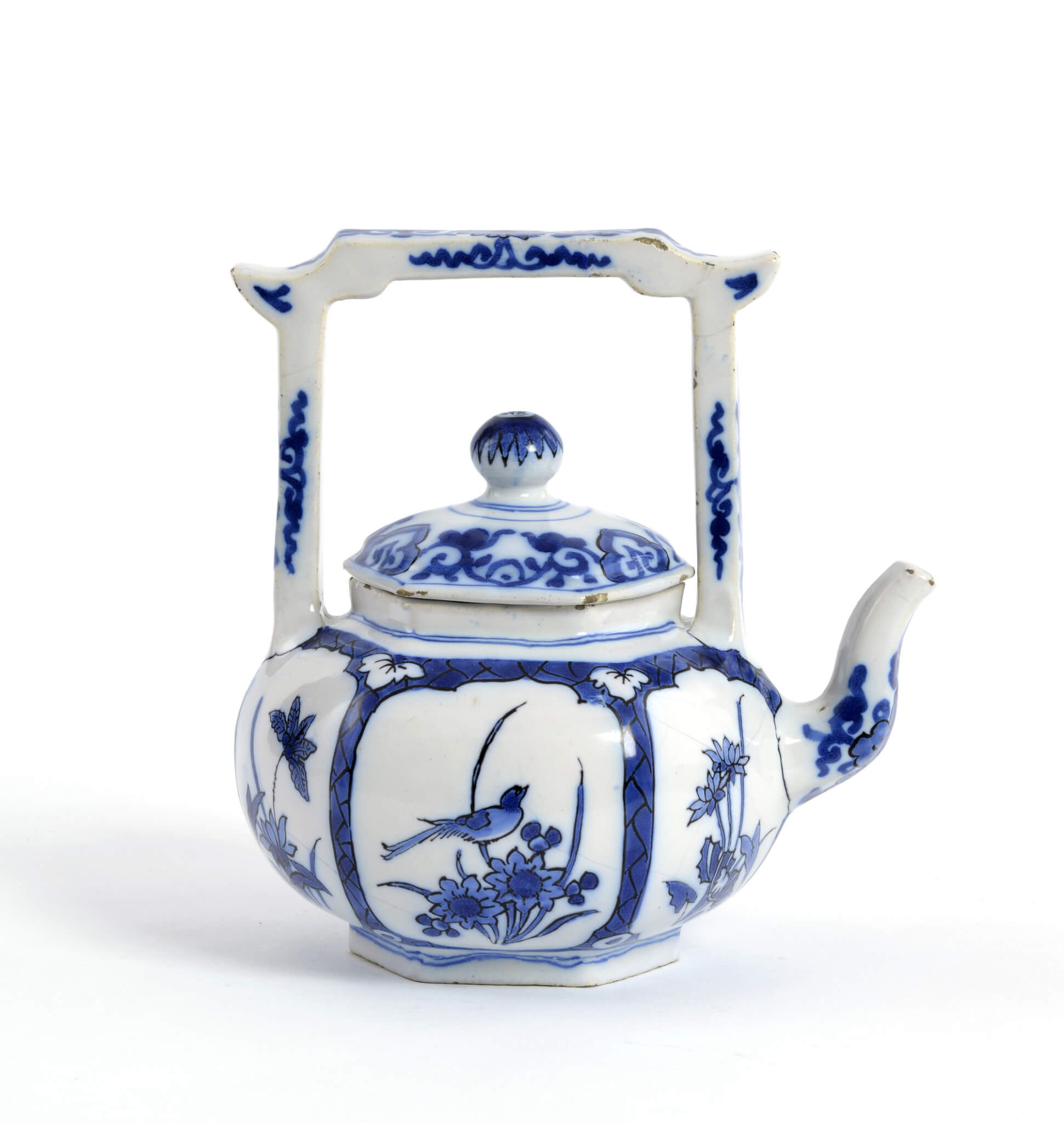 Het Moriaenshooft (The Moor’s Head) factory was located in the Gasthuislaan in Zuidkant, an area in Delft with a large concentration of potteries. Although the founding date of the factory is unknown, the first owner was probably Jan Aelbrechtsz. Groenland, who acquired half of the company’s shares in 1658. There are three main phases that mark the factory’s history: the beginning of the factory and its development under the Hoppesteyn family (1658-1690), the splitting of the factory into two independent companies (1690-1772), and the reunion of the factory into one functioning pottery (1772- 1792).[1]

The first owner, Jan Aelbrechtsz. Groenland, only briefly managed the company. A year after acquiring half of the factory’s shares, he sold his portion to Jacob Wemmersz. Hoppesteyn. A few years later, Hoppesteyn purchased the remaining company shares as well as the tools and two pottery washing plants, becoming the primary owner of Het Moriaenshooft factory. According to Van Dam, Wemmersz Hoppesteyn was originally a cooper. It is likely that he never left his occupation and that he entrusted his mother in law, Adriaantje Jansz, with the management of the company. Adriaantje was the wife of Claes Jansz, the owner of De Porceleyne Lampetkan. When he died in 1653, she became in charge of the factory. According to an ordinance of 1652, widows were authorized to take ownership of their deceased husband’s pottery without taking a test typically required by the Guild of Saint Guild of Saint Luke She probably also managed since the beginning, the day to day operations of Het Moriaenshooft. In fact, when Jacob Hoppesteyn became the sole owner of the factory, the lease stipulated that the company was leased for at least another three years to Adriaantje.[2] 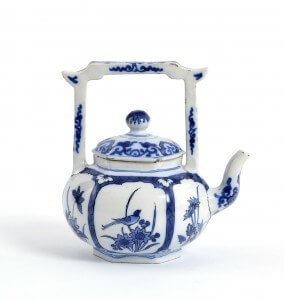 Over the next thirty years, the company grew progressively to become a major figure in the history of Delftware. The objects made by Het Moriaenshooft in this period are in fact amongst the most rare and remarkable of all Delftware production. A document from 1669 states the names of at least nineteen plateelbakkersknechten, potters assistants, aged between 17 and 55 years old who were working for Hoppesteyn. His pieces are characterized by a very pure glaze of a milk white color. They are elegantly decorated with a cerulean blue. Like the blue and white teapot with cover, few of his pieces are marked by the letters IW, his initials. This Delft teapot draws strong inspiration from Chinese porcelain teapots. The overhead handle is a shape that is often seen on Kangxi porcelain, while the teapot itself mimics the form of Chinese Yixing red stoneware teapots. Also, the decoration appears to be an emulation of Chinese transitional porcelain. To create this hexagonal-shaped teapot, the Delft potters must have used plaster molds, since it is impossible to throw a piece with so many angles.

After Hoppesteyn’s death in 1671, his wife, Jannetge van Straten, inherited the company. Over the next several years, she successfully ran the factory with the assistance of her son Rochus Hoppesteyn.[3] The years of co-management between Van Straten and her son were a period of exceptional production. One feat achieved during their management was the experimentation with polychrome decoration through the mixed fire technique. In this process, the decoration was first applied on the object and then fired at a high temperature. Next, gold and red colors were applied during a third fire at a low temperature, resulting in a exceptionally refined object that was undoubtedly intended for the highest class. 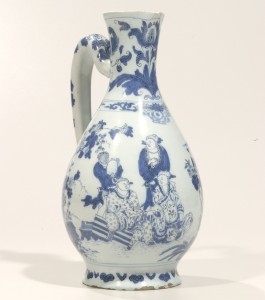 After the passing of his mother in 1686, Rochus Hoppesteyn took the full ownership. He obtained the status of master in 1680, when he was only 19 years old. Hoppesteyn was in fact an exceptionally talented craftsman and demonstrated immense artistic skill.[4] Rare are the pieces that are marked. His mark was composed of a Moor’s head with his initials below. The blue and white chinoiserie ewer is attributed to Rochus Hoppesteyn. The decoration depicts five oriental figure and a moor amidst shrubbery. This object presents some similarities in shape and decoration with a polychrome and gilded jug marked for Rochus Hoppesteyn that belongs to the collection of the Rijksmuseum (inv. no. BK-NM-12400-271) in Amsterdam. Unfortunately, his business skills were less developed, and the factory was soon plagued with financial trouble. In order to ensure its safety, Hoppesteyn sold part of the factory. In fact, his dearth of business acumen, his reluctance to pursue creditors and his tendency toward dissolute behaviour caused both financial and marital difficulties resulting in the necessity of selling a significant part of the factory.

In 1690, he factory was separated into two independently managed potteries. The part that was sold became Het Oude Moriaenshooft (The Old Moor’s Head) whereas Het Jonge Moriaenshooft (The Young Moor’s Head) stayed under the ownership of Hoppesteyn. Two years later, he passed away, leaving his wife a considerable amount of unpaid debt. The company was declared bankrupt, and the pottery, shop, materials and remaining production were sold to the porceleynbakker (porcelain potter), Lieve van Dalen.[5]