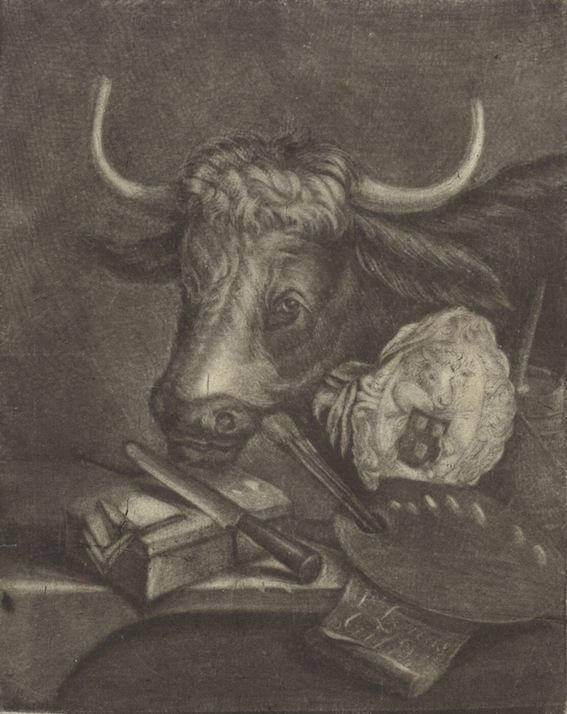 Beginning in the middle ages, a guild system was in place to organize the urban crafts industry. Guilds primarily served to protect the economic interests of its members, but also provided a religious and social function. The types of guilds varied by each city, as they were formed according to specialization, such as the civic guard (schuttersgilde), the butcher’s guild, the miller’s guild and the guild of Saint Luke. In the Low Countries, the guild of Saint Luke was the most common name for a guild founded for artists and craftsmen. 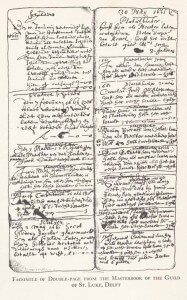 The official foundation of the guild of Saint Luke was issued on 29 May 1611, however the guild had existed long before. [1] It was named after its patron saint the evangelist Luke, who – according to legend – had painted the Virgin’s portrait. Further, Luke’s gospel is known as the most visual account in the Bible, inclusive of detail and atmosphere. The guild was comprised of painters, sculptors, Delftware painters and potters, glass engravers, glass makers, glass vendors, tapestry and embroidery workers, place-makers, fitters, book sellers and art sellers. Making images, artistic or crafty, distinguished them from other craftsmen. [2] From 1661, the porceleynbackers (potters, which already belonged to the guild) also made the sale of pottery officially part of the guild. [3]

Guild membership was required for an artist or potter to hire apprentices or employees, and to have a shop to sell paintings or earthenware to the public. To join a guild you had to be a poorter, a burgess (a burgher who had acquired the right to live within the city walls and also had city rights). Children of poorters automatically received this status, and outsiders were required to purchase the right. The level of mastery, necessary to run a self-employed company, was often protected by a compulsory master’s test and an additional financial contribution. There were fixed rules to become a master; an apprentice had to have worked for six years under three guild masters(two years in each workshop). Then, he went before a jury of master potters to prove his ability. According to the regulations of 20 April 1654, a thrower had to make a ewer, a salad bowl and a salt-cellar with a hollow stem, all thrown from one piece of clay. A pottery painter had to decorate six large dishes, cover an entire fruit bowl with designs, and finally make thirty plates. [4] Once admitted to the guild, the candidate was responsible for paying his mastery dues.

Throughout the seventeenth century, factories were commonly owned by multiple people due to the high investments needed to run a pottery. Individuals might also have had a financial share in several factories. The additional owners functioned merely as participants and had little influence over the operation. Despite the various financial owners, the factory was managed by one person, who was a master or a shopkeeper. In addition to the regular employees and the servants, the master was allowed to employ up to two students at the same time, except his own children. [5] One exception to the guild rules was in the case of a factory owner’s death; the widow of a factory owner could continue to operate the business without receiving guild membership. This occurred at De Grieksche A (The Greek A) factory under the ownership of Pieter Adriaensz. Kocx. After his death, his widow Johanna van der Heul controlled the factory from 1703 to 1722. From 1661, it was also possible to appoint a master as business leader, which meant that the owner no longer had to possess the mastery himself. The owner then purely served as a shopkeeper at the guild of Saint Luke, in which the word shop meant both a shop and a workshop. [6]

The position of the potters in the guild changed with the growth of the Delftware industry in the mid-seventeenth century. For example, in 1620, two painters and two glass engravers formed the head of the guild of Saint Luke in Delft. These craftsmen were uninformed about earthenware and had to be advised by a master potter concerning this craft. By 1648, there were six headmen of the guild, two of which were potters. In 1678, the potters argued to form their own guild that would prioritize their interests. Although unsuccessful, the potters did eventually form their own organization within the guild in 1689. They appointed three potters to form a separate board for the Delftware industry and often served as a contact point or spokesman but did not have regulatory authority. [7] 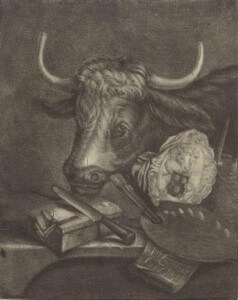 The guild was a brotherhood that had both benefits and disadvantages, although one might argue that there were greater benefits. [8] One important benefit was the social function of the guild; the organizations acted as social security, granting sickness funds and old-age pensions to members. [9] Further, the guild system was designed to improve the crafts and protect their quality. Members were required to pass a compulsory master’s test, which guaranteed the quality of the products and kept them at a high level. Other protective measures were used to combat the increase in counterfeit goods and control foreign imports. For example, the famous order of 1764 required potters to register a description of their factory sign and their maker’s mark. The guild masters even envisioned a more far reaching protective measure when they conceived of a trade treaty with America and the prohibition of foreign faience. [10] Of course, there is no reference to imports of porcelain from the Far East.

The interest of the crafts in the city council were the guild’s chief concern, therefore the guild was able to exert more influence over crafts deemed important. [11] Crafts were closely protected but very strictly supervised by the syndics. For example, when the tax farmers attempted to impose dues on raw materials, the burgomasters resisted with the help of the guilds. The guilds could easily control the different branches of industry, and thus the economic prosperity of the city.

Despite the far-reaching social and civic achievements of the guild system, several guilds were abolished during the Batavian Republic at the end of the eighteenth century. Soon after, the entire guild structure completely dissolved during the new kingdom in the first quarter of the nineteenth century. The remaining possessions and guild funds were given to the city councils. The independent craftsmen and laborers soon formed trade unions, which were regarded as disguised guilds.

[8]  As disadvantage one could experience the obligations that the guild imposed on its members and of course the contribution.