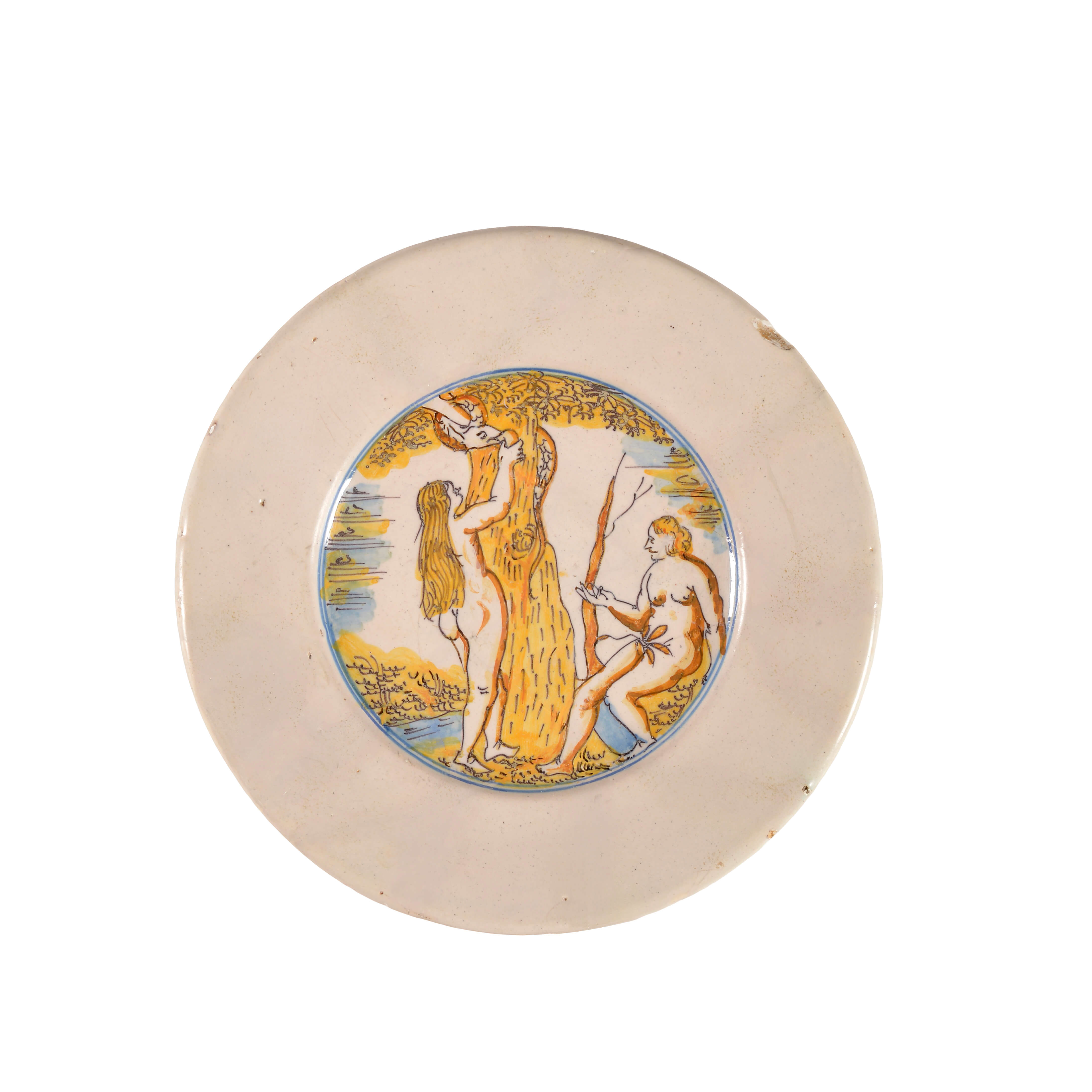 When in the sixteenth century many potters migrated from Antwerp to the northern Netherlands, they established themselves in various cities. However, around 1600 the city of Haarlem emerged as the leading majolica centre. Multiple inventories show that a total of 45 potters had settled there and the production of majolica increased proportionally.[1] Although it is impossible to identify the work of the 45 potters in Haarlem and to attribute objects to one potter, there is one exception: the wares of Willem Jansz. Verstraeten, who is considered the most important potter in the city of Haarlem during the second quarter of the seventeenth century.

As a son of the Antwerp merchant Jean de la Rue, who later named himself Jan Verstraeten, Willem came to the city of Haarlem in 1590.[2] His father sent him to Delft, where Willem worked as an assistant and later as manager of De Porceleyne Schotel (The Porcelain Dish) factory from 1613 onwards.[3] The archives show that his salary was five guilders and ten pennies a week, a wage that was comparable with that of a master carpenter. In January 1625 Verstraeten and the owners of the factory decided that they would apply for a patent on the pottery-making method.[4] This, however, did not exactly happen as it had to, since the archives show that Verstraeten set up his own pottery in Haarlem in the same year.[5] He bought three houses and received from the city council a piece of land, where he established his own pottery. At the time, this was possibly a large and important factory, since there were as many as two kilns and three mills. Furthermore usually 40 to 50 assistants worked at the factory on a daily basis. That he held a significant position can also be noted from his executive positions in the guild of St Luke from 1638 and 1651.

Until about 1640 Verstraeten mainly produced faience of an exceptional quality. This included objects with biblical or historical decorations. Especially objects with historical scenes were rare in the Northern Netherlands. A lot of these dishes are inspired on the so-called a compendiario-style of the maiolica from Faenza and Montelupo in Italy.[6] As a reaction to the lavishly decorated maiolica, these objects were given a creamy white, opaque tin glaze, on which a sober decoration of egrets was applied on the rim and a simple figural image was painted in the center.[7] Verstraeten introduced important technical innovations, which marked the end of the majolica production. From around 1640 his factory created earthenware, which had a layer of white tin-glaze on the reverse. Together with other innovations (such as the blue and white color pattern), the workshop of Verstraeten was able to compete with the so sought after Chinese porcelain.[8] 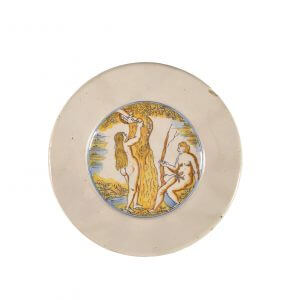 In 1642 Verstraeten suffered a stroke and he decided to turn his pottery over to his son Gerrit. Against all odds Willem made a good recovery and set up a new factory in the same year. Father and son both signed a contract in which the production of earthenware was divided between them. Unfortunately this division is not completely clear, and the opinions of art historians vary widely on this issue. The contract was based on the decoration or the material of the earthenware. Some think that father and son agreed that Gerrit would make the new faience inspired on the blue and white Chinese porcelain and the father would focus on the production of old-fashioned majolica. They state that the contract has been based – almost certainly – on the material and not on the decoration, since there was no need to produce earthenware with Chinese decoration before the year 1647 in which imports of Chinese porcelain came to a halt. Hollandts Porceleyn (Dutch porcelain – as the earthenware mistakenly was called) was in fact in the first 25 years faience with a non-Chinese decoration.[9] However, it is hard to imagine that Willem as ambitious entrepreneur and innovator would settle with the establishment of an outdated majolica factory, especially since this occurred at a time when the majolica production compared with the production of faience declined significantly.[10] Therefore others believe that the contract has been based on the decoration, that Willem would produce the white goods and Gerrit the more expensive faience with a full decoration.[11]

However it may be, Willem Verstraeten tried several times to get out of the contract with his son, he also wanted to make Hollandts porceleyn.[12] What started with a few skirmishes, ended in a whole series of controversial legal cases, involving numerous witness statements by colleagues and workers from Haarlem, Leiden, Delft, Amsterdam and elsewhere.[13] The cases were centered around the question what Hollandts porceleyn was exactly. While Willem focussed on the decoration, his son was aiming at the material. According to Willem faience referred to white goods with a small amount of decoration, porcelain on the other hand was faience with full decoration. In contrast to this, Gerrit stated that all better made flatware was called Hollandts porceleyn, irrespective of the decoration. Willem got the top of the Delft ‘Dutch porcelain makers’ to testify in favour of his point of view.[14] Despite the existence of the archives of these court cases, it is still rather difficult to find out if the contract father and son signed was based on the material or on the decoration.[15]

Finally in the autumn of 1650, the ruling of the Court of Holland handed down to the effect that Willem could produce wares with new inventions but not in the manner of porcelain. The last judgment, that of the High Court, is not known; possibly a settlement was reached in the end.[16] This outcome had as result that Willem Verstraeten continued making faience, but at first without the Chinese full decoration, since he had stated in several court cases that the Chinese decoration was the main characteristic of Hollandts porceleyn.[17] Instead of the Chinese decoration he focussed on a more Italian style pattern as is shown in the plate with the depiction of the Fall of Man in our collection. It is known that Willem Verstraeten provided his workers with several prints to assist in the design and production of many pieces. This image of Adam and Eve was possibly derived from a 1615 dated etching in the Raphael Bible attributed to Orazio Borgianni after Raphael.[18]

[1]  Not only the estate inventories of Haarlem citizens confirm that from 1600 there was a gradual increase in the number of dishes, but also the archeological finds can tell us more about the production in Haarlem, since the are pieces found in Alkmaar, Hoorn and Enkhuizen which are presumably made in Haarlem. Biesboer, P, Nederlandse Majolica 1550-1650; Schotels en tegels voor de sier, Amsterdam, 1997: p. 16.

[3]  In the archives his name is mentioned in the year 1613 as an assistant and in the year 1617 as an contractant of the factory. It is likely he worked there for these three years and possibly longer. Ibidem.

[4]  Verstraeten had to sign a contract to disclose, without concealing anything, all his skills and practices, which he already knew and would know, concerning the making of pottery, without being permitted to teach the same to anyone else. Van Dam, J.D. Delffse Porceleyne, Dutch Delftware 1620-1850, Zwolle/Amsterdam (Rijksmuseum), 2004, p. 15.

[8]  Since there was a change in fashion and colourful objects became less popular, many potters decided to make earthenware for the wealthy citizens that was solely decorated in blue The color blue was largely chosen under the influence of the popularity of Chinese porcelain. Furthermore the blue pigment, cobalt, was an easy color during the baking process. Idem, p. 48.

[12]  Some historians say that Willem came to the understanding in 1647 that he had made a mistake and wanted to switch from majolica to faience. This change of heart was allegedly caused by the enormous decline of imports of Chinese porcelain to the Netherlands. Since there was a great demand for these wares, several potters decided to fill this gap in the market and to make faience with decorations in a Chinese style. Van Dam 2004 (note 5), p. 17. Others think that Willem just wanted to produce faience with a Chinese, full decoration.

[14]  Several Delft Dutch porcelain makers testified on behalf of Willem Verstraeten, but they only focused on the decoration. For example, Hendrick van Gogh testified that ‘he knew in truth that everything that is called porcelain (and is made in Delft) that the same must be painted all over, and that what was painted with little wreath or with little manikins or with coats of arms, that the same was called white goods’, Van Dam 2004 (note 5), p. 18.

[17]  After 1650, in a time when there were still no imports of porcelain from China and the outcome of the court cases began to carry les weight, Willem’s pottery in Haarlem did produce faience with Chinese decoration for a only a short time as Willem Verstraeten died in 1655, followed by his son two years later. Ibidem.