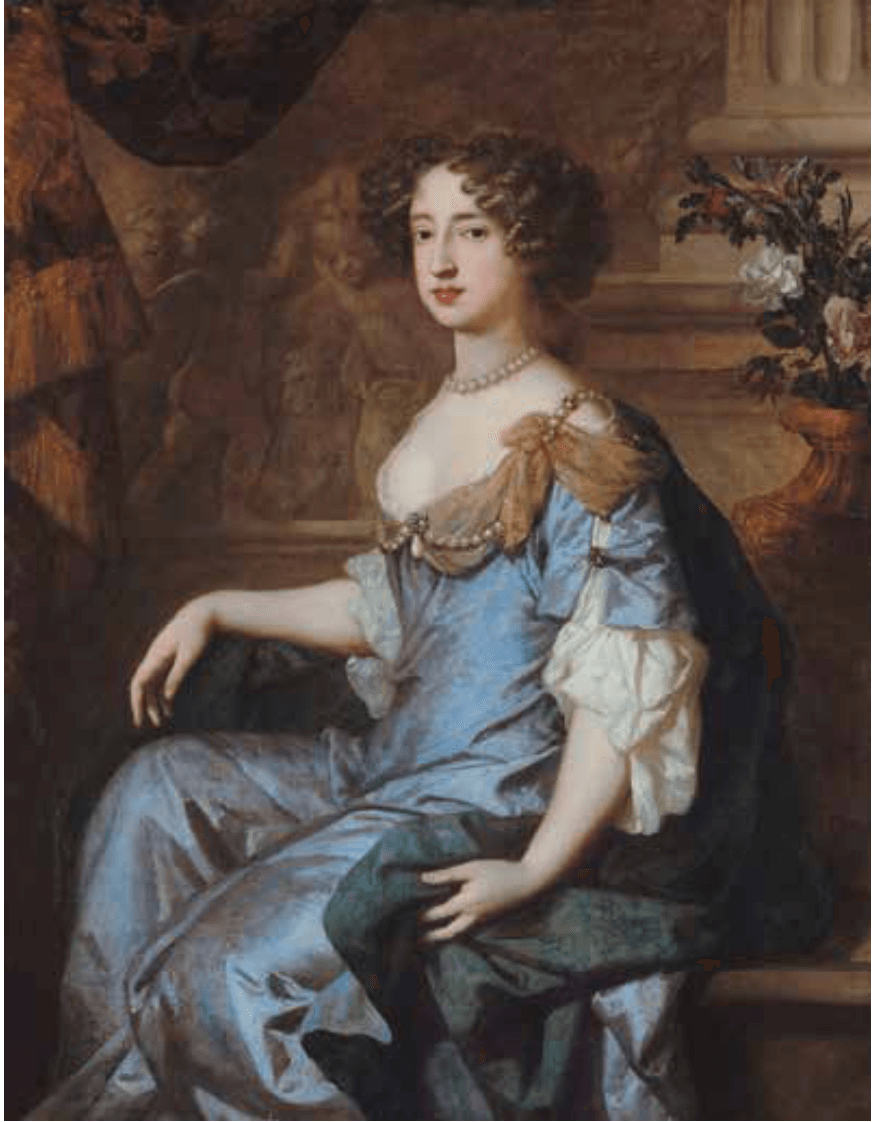 In 1677, Mary Stuart, daughter of James, Duke of York and future James II, arrived in Holland after a treacherous journey from England. She was fifteen years old, and had just married her cousin, William III, stadholder of Holland. With her animated and personable demeanor, the Dutch people quickly developed an adoration for Queen Mary. Throughout her reign, she used her popularity and international influence to promote Dutch culture. 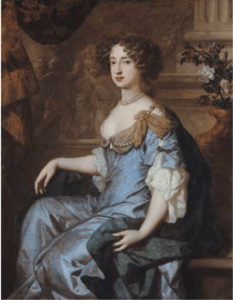 Mary had several beloved pastimes that have come to characterize her cultural influence: gardening, Dutch Delftware and Chinese porcelain. In Asia, the Dutch East India Company (VOC) enjoyed a commercial monopoly and was thus primary importer of the region’s exotic and expensive goods. These products, which included spices, silk, porcelain and flower bulbs, were collected with great enthusiasm by the Dutch elite. Flowers and exotic plants were particularly coveted and the propagation of new varieties became a suitable pastime for ladies and gentlemen of rank. Thus, owning a private estate that included a garden with rare and exotic specimens became highly fashionable, a fact supported by seventeenth century archives. The House of Orange also had a great influence over the popularity of gardening.[1]

The Art of Gardening
Jan van der Groen (circa 1635-1672) was the head gardener at Huis Honselaarsdijk, one of William and Mary’s country estates that was located near The Hague. In 1669, he wrote Den Nederlandtsen Hovenier, a popular treaty that went through fourteen editions. The text details Van der Groen’s expertise in botanical sciences, and provides insights into the symbolism of gardening.

Van der Groen theorized that nature was made imperfect through the fall of Adam, but could be made pleasurable through art, domestication, and orderliness. Gardening was considered the perfect solution to the recovery of paradise. The cultivation of flowers and their bountiful bouquets were physical proof of the accomplished work.[2] In another seventeenth-century gardening manual, De Florum Cultura, Giovanni Battista Ferrari (1583-1655) refers to vases as ‘portable gardens’.[3] Ladies and gentlemen of rank would proudly display their gardening skills, and would often compete with one another over the results. Gardening played an important role at the Royal palaces of Het Loo. The activity was spurred by the interests of the Queen, who likely developed her passion at an early age probably after the influence of her tutor Henry Compton (1630-1685), who owned a collection of plants.[4] When Mary arrived in the Netherlands, William asked the new gardener of Honselaarsdijk to bring into bloom “all the plants, bulbs and seeds of flowers made available to him now and in the future (…) if possible in every season” so that “he can can every week make from the same two or three bouquets for the use of her Highness”.[5] The numerous floral decorations, floral still lifes and vases that remain in Mary’s palace Het Loo and in her palaces in London are proof of her fascination for flowers.

The VOC supplied exotic plants to the royal court and other wealthy Dutch patrons. In 1673, William sent a letter to the VOC director requesting new plant species. The nasturtium, an exotic flower mentioned by Mary’s doctor, Walter Harris, is one species that flourished in the royal gardens at Het Loo. The nasturtium and many other floral species cultivated at Het Loo required a high level of botanical expertise that very few gardeners could provide.[6]

William also shared Mary’s passion for gardening. However, his interests were largely motivated by politics, as the elaborate, grandiose gardens of the royal palaces enhanced his political status. Both William and Mary took great care in the redesign of their palaces to accommodate their interest in gardening. Together, they ordered and supervised the complete remodeling of the gardens of many of their residences, such as Huis Honselaarsdijk, Palace Het Loo in Apeldoorn and Hampton Court Palace in Greater London. There, many facilities were built in order to facilitate the cultivation of the most precious and rarest species. The garden at Het Loo was equipped with plate bandes, a typical Dutch invention to showcase exotic flowers. Titchmarsh describes the term as “narrow borders with indented shapes edged with box, especially designed to act as theatrical sets in which to show off rare flowers”.[7] 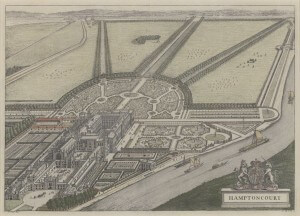 In 1689, William and Mary moved to Hampton Court Palace, where they transformed the gardens with the expertise of Daniel Marot. The French architect and designer had previously redesigned the Royal couple’s Palace Het Loo, and was brought to England to remodel the garden. Together with Marot, Mary and William conceived of small flower gardens and the privy garden, located in the South Gardens, where the tender and exotic plant species were best protected.[8] The garden at Hampton Court also contained one of the earliest greenhouses used in England. The Queen’s ‘stoves,’ which were three greenhouses designed for tropical plants, are described in a catalogue for Mary’s botanical garden.[9] The greenhouses were the invention of Heindrik Floris, a Dutch carpenter. To maintain the climate for these delicate species, the greenhouse was installed with furnaces and flues. Another achievement was the installation of a ‘melon ground,’ where plants such as auriculas (one of Mary’s favourites) would grow. Mary had one of the largest known collections of exotic plants. Her botanist, Dr. Leonard Plukenet, catalogued and detailed more than two thousand different species. In 1690, the botanist Charles Hatton visited Hampton Court and declared having seen “about 400 rare Indian plants, which were never seen in England.”[10] The floral varieties in Holland probably outnumbered the gardens in England, because in 1693, a cargo containing flower bulbs from Honselaarsdijk arrived at Hampton Court. In her unbridled quest for more floral varieties, Mary even sent her gardeners as far as Virginia, the Canary Islands, and Mauritius.

The Display of Flowers
Queen Mary’s fondness for flowers was also displayed in the elegant rooms of her Royal palaces. The Royal family patronized the great Dutch and Flemish botanical and floral artists, whose lush and colourful still life paintings decorated her rooms and became part of the Royal art collection. The Queen also commissioned innovative Delftware vases to display her most precious garden species. Mary ordered a range of spouted vases, with the pyramidal flower holder as the most iconic form. As an influential tastemaker, vases with spouts became extremely popular and the range of designs widened. According to the inventories, these ‘portable gardens,’ as well as most of her ‘Delft porcelain’ were often displayed in rooms with direct access to the garden or in galleries. Thus, as Jan d’Outrein wrote in a poem dated from 1700 and dedicated to Mary’s garden pavilion in Rosendael, “art and nature” would “compete here in display.” 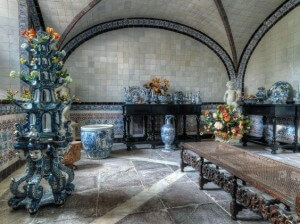 In Honselaarsdijk, for example, nearly all of the Delftware was displayed in the two galleries, in a room located in the courtyard, and in the bathing quarters, which consisted of a suite of rooms in the stable building. The palace inventory of 1689 recorded “2 large Delft porcelain pyramids to put flowers into and 4 small ones” and several flower pots. Unfortunately, the information on these objects is limited because no Delftware has survived from the palace. In Palace Het Loo, all pieces of Delftware that were inventoried were displayed in the Queen’s cellar dairy, where the magnificent vases of flowers were echoed in the bouquets painted on the tiles of the room. Two “flat flower bottles, five small flower pyramids, and thirteen flower pots” were listed in the inventory. Excavations of the adjacent garden have revealed several types of Delft vases, often painted with Chinese inspired motifs. Some of the objects are marked SVE for Samuel van Eenhoorn, the owner of De Grieksche A (The Greek A) factory from 1678 to 1685. In Hampton Court Palace, most of Mary’s prized Delftware was exhibited in the Water Gallery. This sumptuous pavilion, which was overlooking the Thames, included a dairy with sizable milk dishes and large ornamental tiles decorated with designs after Daniel Marot, the court designer (who, as a French Huguenot had brought the style of Louis XIV [1638-1715] to the Protestant court of William and Mary), as well as a gallery where large flower pyramids and vases were placed, and “into which opened a little room in each of the four corners: a mirrored room, one of marble, one for the bath, and one of Delft ‘porcelain’”.[11] As described by the English journalist and novelist, Daniel Defoe (c. 1660-1731), the Water Gallery was “the pleasantest little thing within doors that could possibly be made”.[12] Unfortunately, the gallery was destroyed after Mary’s death to accommodate other construction. However, three beautiful pairs of vases survived from her Delftware collection at Hampton Court: two of a pyramidal shape and the third pair of a baluster form. Each vase is marked AK for Adrianus Kocx, the owner of De Grieksche A (The Greek A) factory from 1686 to 1701 and unlike the vases at Het Loo, they are all decorated in a Western style.

The vases filled with rare flowers were not just intended for pleasure and amusement, but were part of the pomp and circumstance befitting a palace. By collecting these treasures, the court certainly aimed to stand out as a model of splendor on the international stage and probably assert itself against the French power represented by Louis XIV.