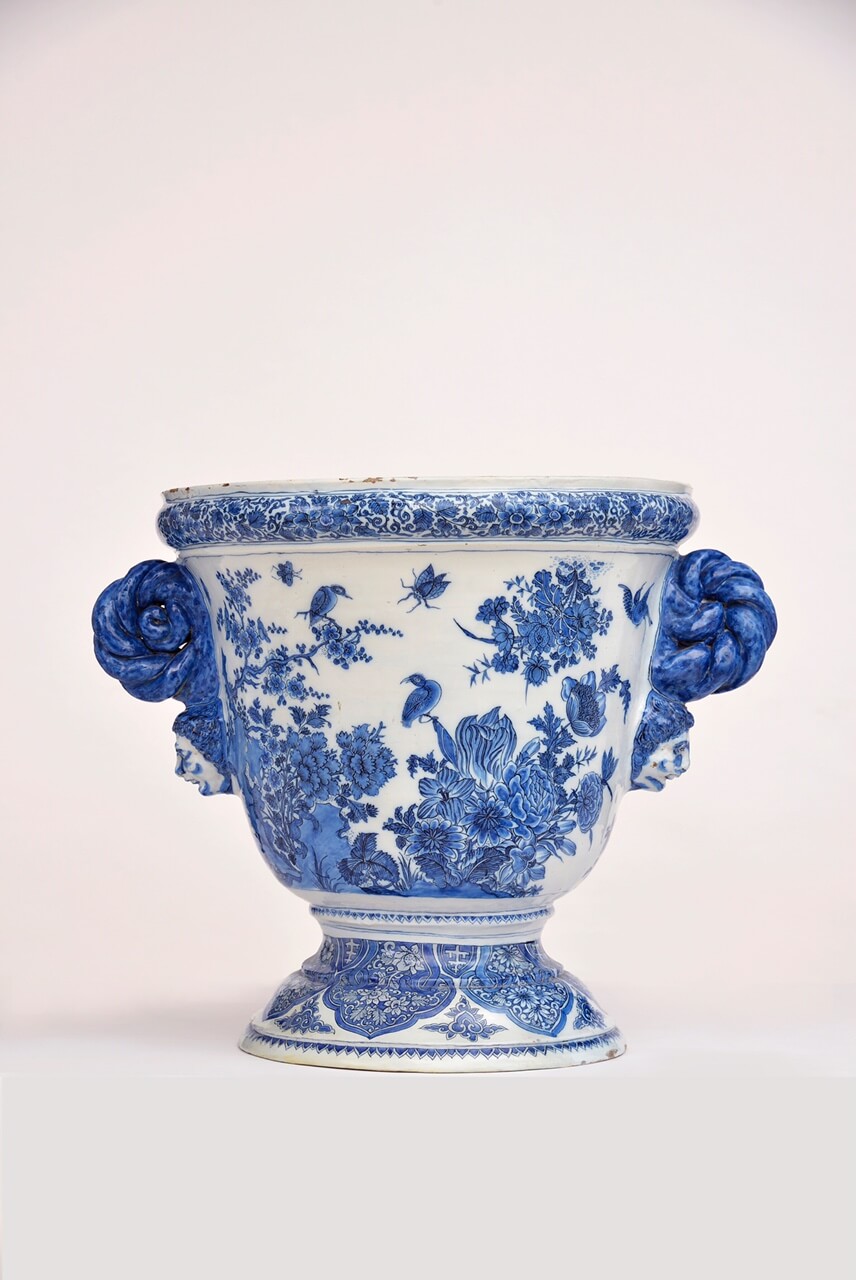 De Grieksche A (The Greek A) is considered as one of the most famous and prestigious Delftware factories of the Dutch Golden Age. The different owners have contributed, each their own way, to build what became a real institution. From 1678 to 1685, Samuel van Eenhoorn masterfully managed the factory that he had previously inherited from his father. He stayed in control of his company during seven prosperous years. Samuel van Eenhoorn was one of the first Delft potters to understand the importance of developing a unique and recognizable style. Rapidly, his production spread to the interiors of a very wealthy clientele. The excavation in the Paleis het Loo have shown that the delicate blue and white objects that were created during his ownership were also highly appreciated by the House of Orange.

After his death in 1685, his widow ran the factory for one year and sold it to her brother-in-law Adrianus Kocx who took it to even greater heights. The factory consisted of dwelling quarters, tin ashes and painting areas, a clay house, a woodshed, a geefhuis (shed in which the pots were glazed), and a yard.[1] It can be said that during his ownership, Adrianus Kocx made his contribution to the development of Western ceramics. His production, in which the high degree of sophistication is absolutely remarkable, can be seen as the witness of a cultural and artistic syncretism that was inherent in this period.

From 1680, the Dutch East India company (VOC) started to massively import Chinese porcelain from the Kangxi period (1662-1722). Much of this porcelain was decorated with a very delicate underglaze blue sapphire. It is also during the Kangxi period that the famille verte scheme was developed. This type of porcelain is characterized by a predominant green enamel together with blue, red, yellow and black. The introduction of this new variety of porcelain in Holland encouraged the Delft potters to renew their repertoire. Their source of inspiration progressively passed from the Wanli to the Kangxi porcelain wares.[2] Like these two plates illustrate, the work of Adrianus Kocx reflects this transition. From the first glance, the intensity and the brilliance of the blue on the milk-white glaze is striking. They are each painted in the center with a snarling dragon amidst a profusion of flowering branches. In Chinese legends, the dragon is a powerful mythical animal and the symbol of the emperor. However, as Schaap explains, in this case, “they have been transformed into a wild and frightening chimera. The appearance of the dragon indicates that Dutch ceramic painters imitated motifs from Chinese porcelain without understanding the symbolism contained in their decorations.”[3]

Also, many of the objects produced under his management result in a symbioses between oriental motifs borrowed from Chinese porcelain and European designs. His ownership also corresponds to the creation of a wide variety of new shapes. Some of the designs have the particularity to have been borrowed from the French architect Daniel Marot. After the revocation of the Edict of Nantes in 1685, Daniel Marot, who fled from the threat of Protestant persecution, came to settle in the Netherlands. He became the official architect of William III, Prince of Orange, who entrusted him with the decoration of his residence, Paleis Het Loo. In order to decorate the palace, Queen Mary, who developed an unequalled passion for Delftware, commissioned many objects from De Grieksche A. Short after the death of Samuel van Eenhoorn, the former owner of De Grieksche A, the royal couple moved to Hampton Court Palace in Britain. Nevertheless, they continued ordering many magnificent Delft objects from Samuel’s successor, Adrianus Kocx. Queen Mary highly contributed to the international spread of the fashion for Delftware.

The work of Daniel Marot was so appreciated by the Royal court that he was asked to follow Queen Mary and King William to England. Despite the distance, it seems that the French architect and Adrianus Kocx have worked in collaboration. Many of the most sumptuous Delft that resided in Hampton Court Palace often bear the very distinctive imprint of Daniel Marot. Only a very restricted number of factories had the skill and expertise to produce such exceptional items. De Grieksche A was probably the only factory Marot worked with.[4] One of the most striking aspects of Marot’s design is the symmetry: the wealthy interiors were decorated with objects that were displayed in pairs. A delicate pair of bottle vases could for example be displayed symmetrically on a mantelpiece, above a door or on an impressive piece of furniture. The pair of blue and white bottle vases were inspired by a Chinese Kangxi prototype. They are each painted around the cylindrical body with four double ruyi-shaped cartouches alternating with four heart-shaped panels of strapwork pendent.

To execute such sophisticated objects, Adrianus Kocx was undeniably surrounded by a very talented team who perfectly knew how to harmonize the Chinese repertoire with European designs. The blue and white pilgrim bottle with a metal cover is the perfect example. According to Van Dam, this type of flask may have been “part of a table service. The flattened round shape has been borrowed from an originally mid 16th century Italian idea”.[5] The unusual decoration on this bottle was taken from a Chinese export porcelain design of the Kangxi period.

After fifteen years of great management, Adrianus Kocx passed away. By continually innovating, De Grieksche A became one of the most prestigious ceramic factories in the Netherlands but also abroad. After his death, his son Pieter Adriaensz. Kocx took great care of the company and produced some of the most beautiful polychrome Delftware that can be seen today.