As early as 1740 under the influence of Madame de Pompadour, mistress of King Louis XV and an influential figure in the art field, a porcelain factory was installed in one of the towers of the royal Château de Vincennes. In 1756 the factory moved to a building in Sèvres, where it still exists as a museum. The founder of the Musée national de Céramique was factory director Alexandre Brongniard (1770-1847), who had the ambition to broaden the knowledge regarding ceramics, and inaugurated the first museum that was entirely dedicated to ceramics and glass in 1800. Therefore, since its creation, the museum has the vocation to gather, protect and display the ceramics of all periods and places. Today, the institution has assembled more than 50,000 objects, of which at least 300 pieces of Dutch Delftware.

The first Delftware objects entered the museum in 1829. The Parisian art dealer Vachée gave the museum some Delftware objects in exchange to some Sèvres Porcelain pieces. The collection then expended through purchases and donations. From 1835, Brongniard set out several journeys, notably in the Netherlands and in Germany, that lead to the purchase of some exceptional Delftware pieces like this beautiful ‘Cashmire’ teapot marked PAK for Pieter Adriaensz. Kocx, the owner of De Grieksche A (The Greek A) factory.

Interestingly, the Delftware acquisitions retrace the evolution of the production in the city of Delft and its influence amongst the production of ceramics in Europe. The museum intents to demonstrate the primary importance Delft had in the history of ceramics. 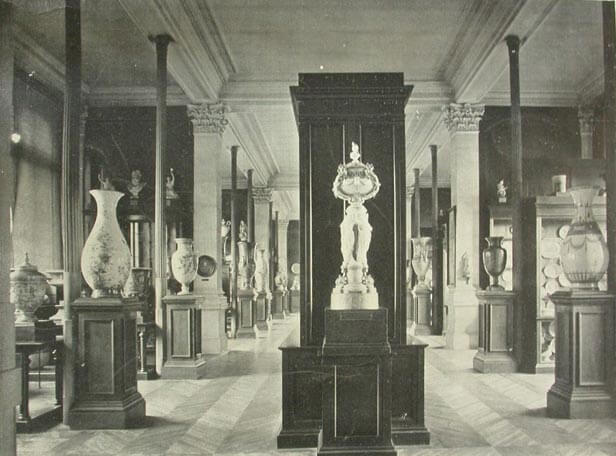