The Victoria and Albert Museum in London is the world’s largest museum of decorative art and design. Founded on the following day of the Great Exhibition in 1851 and named after Queen Victoria and Prince Albert, the museum is located in an area that has become known as “Albertopolis”, which gathers a group of museums and educative institutions.

For the greatest joy of amateurs and connoisseurs, the institution houses the most comprehensive and impressive collection of ceramics in the world, with over 80,000 objects from all around the planet that encompass the history of fine ceramic production from about 2500 BC to the present day.

Dutch Delftware is well represented, with about 300 magnificent pieces on view. The Delftware collection covers a wide spectrum of objects from the Dutch Golden Age. In 1909, the impressive ceramic collection of the Australian millionaire George Salting was donated to the museum. More than thirty Delftware pieces that previously belonged to the famous art collector can be contemplated by the museum visitors. Amongst them appears a very rare Imari box marked for Pieter Adriaensz. Kocx, the owner of De Grieksche A (The Greek A) factory from 1701 until 1703. The box was probably intended to serve as a receptacle for salt and pepper.

One of most admired piece of the museum is a magnificent pair of blue and white pyramidal tulipieres from 1695. Contrary to the general belief, vases with spouts were not only intended to display tulips but all kinds of flowers. They were highly decorative additions to palaces and country houses. 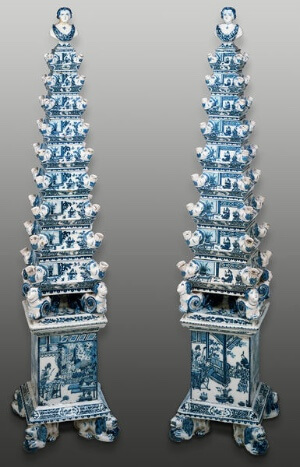