In 1689, Queen Mary II and King William III moved from the Netherlands to England. Mary, who had a keen passion for Delftware, continued ordering beautiful objects and highly contributed to spread the fashion in her new homeland. Thus, after the Glorious Revolution, aspiring courtiers expressed their loyalty toward the Dutch Royal couple by collecting Delftware. This explains why today, many of the most delicate Delftware pieces can be found in Britain. For both connoisseurs and amateurs, Dyrham Park (Gloucestershire) and its magnificent seventeenth century mansion house is definitely worth a visit.

Dyrham Park was created in the late seventeenth century under the initiative of the court administrator William Blathwayt (1649-1717). His competences and ability to speak Dutch lead him at the head of the diplomatic service and the army under William III’s personal supervision. Owing to his royal connections, the mansion house became a showcase for sumptuous Dutch decorative objects. In this beautiful interior decorated with wood paneling and Dutch tiles an impressive collection of ceramics is displayed. A 1710 household inventory shows that William Blathway’ Delftware collection was certainly one of the most important in Britain.

Two magnificent pyramidal flower vases that are recorded in the inventory are today displayed in the Diogenes Room. In one of the adjoining rooms, a beautiful blue and white basket is also on view. 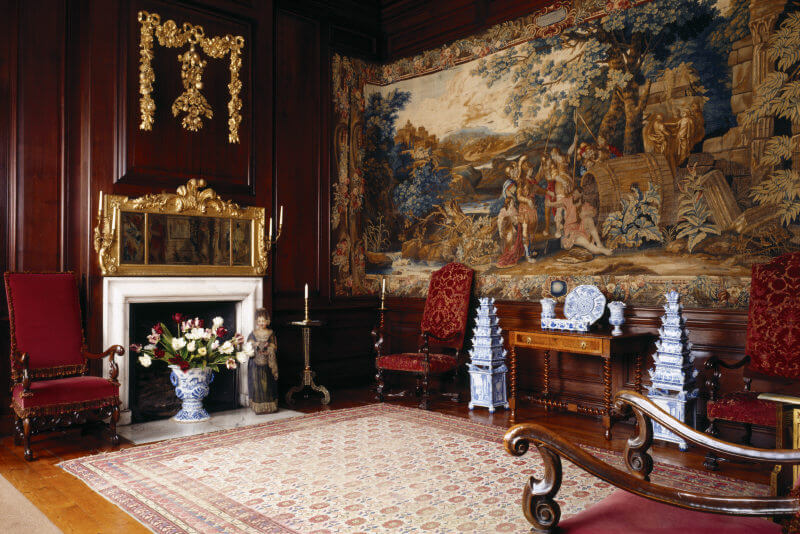