The study of botany and natural sciences was a growing interest in the Netherlands during the seventeenth century. The VOC imported rare and exotic flowers to the region and helped develop their fascination amongst wealthy patrons. A few of the most beloved and expensive floral varieties were the yellow rose, the passion flower and the iconic tulip. 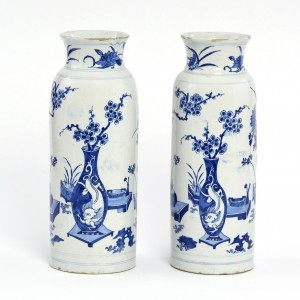 The cultivation of new floral species was a popular pastime for the elite. Wealthy families would showcase their amateur gardening skills with floral-filled vases displayed throughout their homes. As indicated in contemporary paintings, Chinese porcelain and Dutch Delftware blue and white flower holders were the absolute fashion. Many of the shapes and designs of the Delftware vases were inspired by the Chinese and Japanese wares imported by the VOC. This very delicate pair of rouleau vases is one example of this stylistic exchange. The blue ground vases, of a typical Chinese shape, are each painted with a dragon and blossoming branches.

The national passion for flowers was highly influenced by the Dutch royal couple, William III and Mary II. In 1685, the couple hired the French architect, Daniel Marot to design the interiors and gardens of their royal palaces, a role that would help define the taste of the royal family. Marot conceived the parterres of the gardens and also provided a comprehensive scheme of coordinated decorative elements, such as fountains, statues of mythological figures and also magnificent ornamental jardinieres and flower holders bearing allegorical figures and emblems.[1] Archaeological excavations of the garden next to the Queen’s apartments uncovered fragments of exceptional objects, such as tiered flower vases, jardinieres and flower baskets to decorate both the garden and the interiors. Many of the decorative schemes of these objects bear Marot’s unique style. Although the nature of their relationship is unknown, Marot probably worked with Adrianus Kocx, the owner of De Grieksche A from from 1686 to 1701.[2] 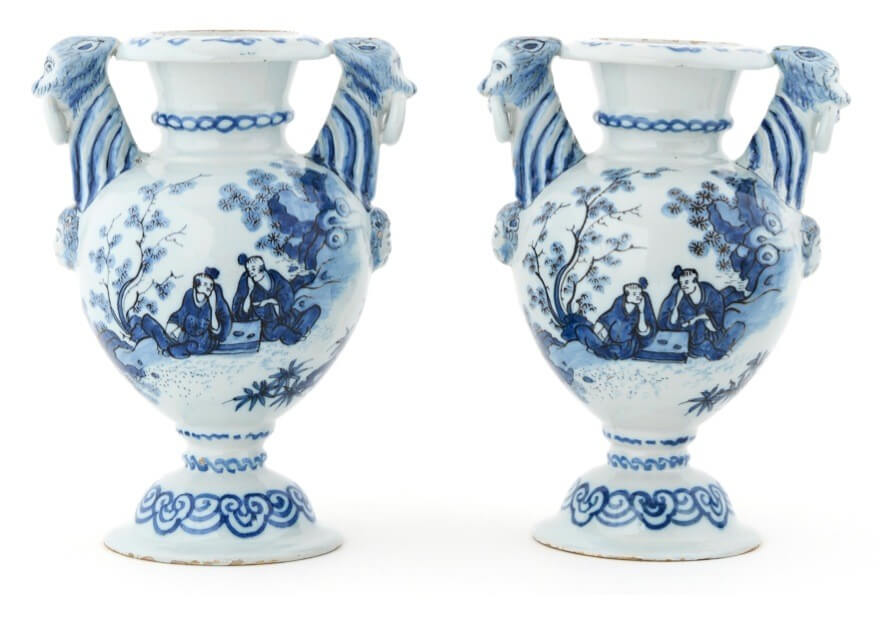 The magnificent pair of cashmere jardinieres marked for Pieter Adriaensz. Kocx, the son and successor of Adrianus Kocx, presents many similarities with the fragments of a pot bearing the royal arms that were excavated in the palace garden. The shape was probably borrowed from Marot’s designs. Mary II was the unofficial patron saint of Delftware, establishing the fashion for the style for generations to emulate. The tastemakers of the time followed Mary’s lead by placing orders for grandiose ceramics, and decorating their residence with vases full of flowers. After her death, De Grieksche A continued to manufacture garden urns made fashionable by the Queen.[3] The present pair of cashmere jardinieres were probably made with the same moulds used to make those that were commissioned by the Queen. The objects were expensive orders likely commissioned by a European elite. The impressive jardinieres were filled with all types of plants or even large bouquets, depending on the owner’s preference. For example, King Louis XIV had a preference for jasmine flowers.

This pair of vases with beast-and-ring handles was probably also used in a garden setting. According to Van Dam, the forms were used as ornamental devices on the balustrades of a formal garden. The shape is derived from Nevers designs, which were created from Italian prototypes.[4] Queen Mary’s fondness for flowers was also displayed in the elegant rooms of her royal palaces. The royal family patronized the great Dutch and Flemish botanical and floral artists, whose lush and colourful still life paintings decorated her rooms and became part of the royal art collection. She was also observed watching Jean-Baptiste Monnoyer paint floral decorations at Kensington. And Mary’s own portraits often contain urns overflowing with flowers, or an orange tree. 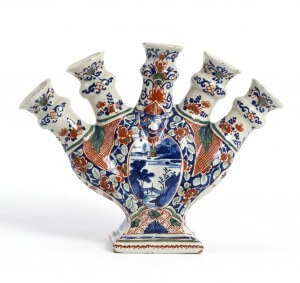 William III instructed the head gardener at Honselaarsdijk to keep flowers in bloom all year, so that two or three bouquets could be made up for Mary each week.[5] The Queen commissioned innovative vase designs to display her most precious garden species. A range of vases with spouts were made for Mary, with the pyramidal flower holder as the most iconic form. As an influential tastemaker, vases with spouts became extremely in vogue and the range of designs widened. Of the thirty Delft factories, at least five produced spouted vases. Despite their popularity, this type of cashmere tulip vase is quite rare in Dutch Delftware. Substantial fragments of a ‘fan-shaped flower vase’ of this model with the mark of Samuel van Eenhoorm, the owner of De Grieksche A were excavated at Paleis Het Loo. The cashmere vase in our collection is marked by his brother, Lambertus van Eenhoorn, the owner of De Metaale Pot from 1691 to 1721. The two factories likely worked together and shared the same moulds.

The flower vases were an integral part of the Paleis Het Loo design during the time of William and Mary. From April to October, the palace museum displays forty-five reproductions of Delftware vases to provide visitors with a total immersive experience into the lives of the Royal family.