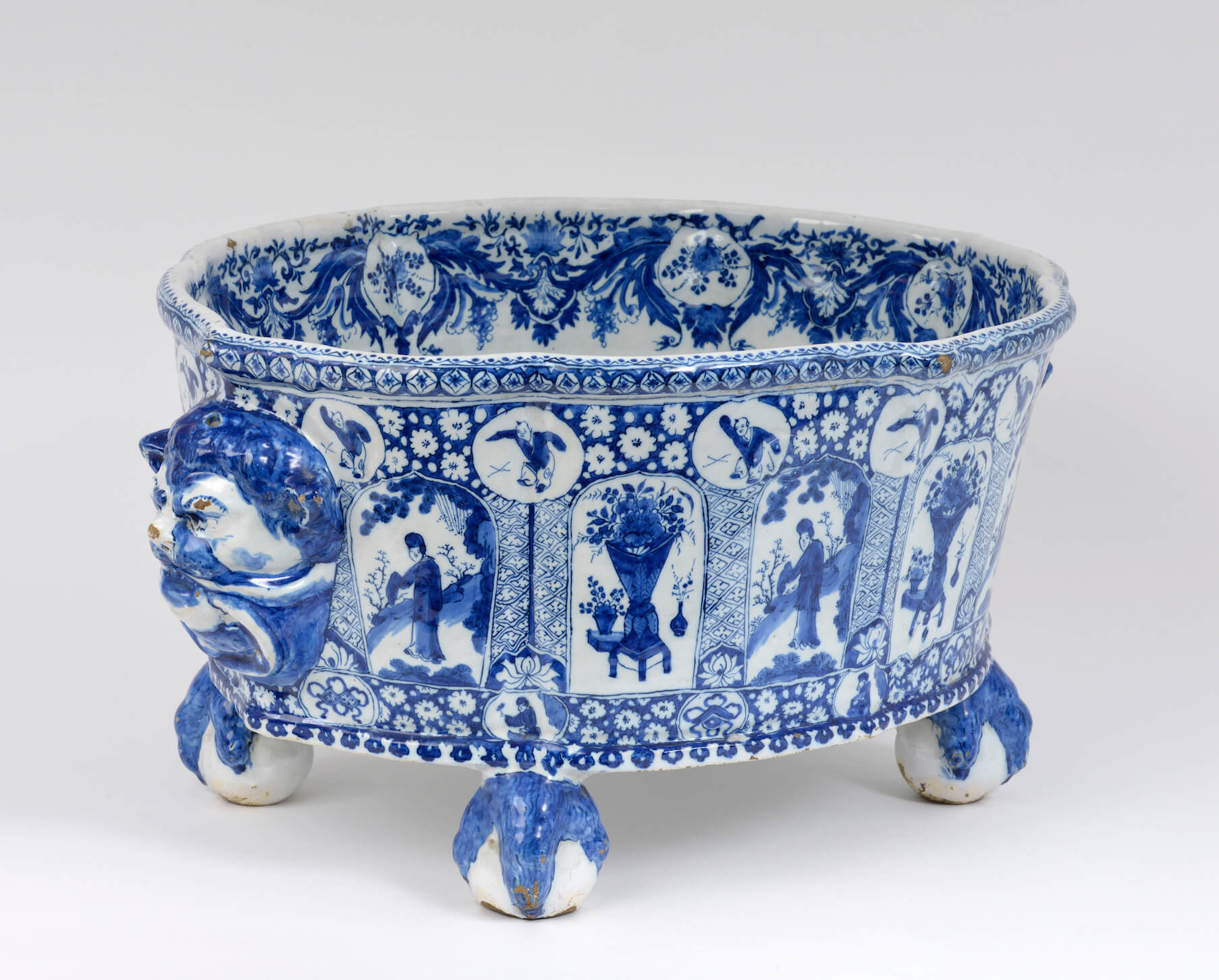 During the seventeenth and eighteenth centuries fine dining was an exceedingly important social ritual, and the accompanying accessories were reflective of the owner’s status. The well-laid table was the culmination of splendor. However, dining traditions changed during these centuries and the Delft potters quickly accommodated the new tastes of the nobility and the wealthy bourgeoisie for adorning their dining tables and even dining rooms. 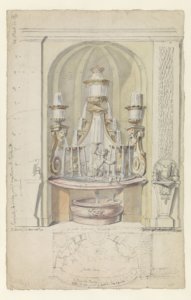 At the end of the seventeenth century, interior design and the style of tablewares underwent considerable changes. Specialized dining rooms were built and accommodated new, large pieces of furniture, such as buffets and draw-leaf tables. Unlike the smaller and lightweight furniture that preceded, these new forms were heavy and were not easily moved throughout the home. Further, tablewares and decorative objects were designed to complement the new furniture. For example, the buffet served a dual function: it demonstrated one’s wealth by displaying beautiful ornamental objects and it was used in the elaborate service of wine. The most beautiful buffets included sumptuous services including a monteith, wine cooler, cisterns and sometimes even a fountain and a basin. The fountain was used to rinse the glasses, which were then placed upside down in a monteith full of ice or cold water. Larger wine coolers were also filled with ice or cold water in order to chill the bottles in preparation for serving the wine. Glasses were filled by a servant and offered to guests on a salver. At the time, the larger houses and castles had ice-cellars dug deep into the ground, in which temperatures stayed low, and ice, harvested from ponds during the winter and packed in straw, could be stored during the warm summer months. The present wine cooler was undoubtedly part of an exceptional service, and can be attributed to Adrianus Kocx, the owner of De Grieksche A (The Greek A) factory from 1686 to 1701 through a comparison to several marked objects with an almost identical decoration. The design for a magnificent water buffet intended for a garden house made by Daniel Marot around 1716 gives an idea about how the wine cooler may have been showcased. The print illustrates a large wine cooler placed beneath an elaborate fountain. The cooler, like this one, is decorated with a lion mask and filled with bottles. 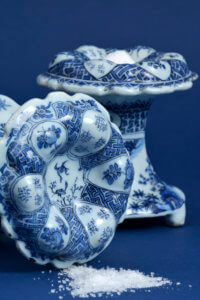 Another indispensable object for the well-laid dinner table was salt. Salt, known as ‘white gold,’ was especially expensive during ancient times and the middle ages. Over the centuries, salt became more available, but through the seventeenth and into the eighteenth century it remained an important indicator of wealth and status on the dining table. The presentation vessels were often sizable and impressive. The shape of salt cellars often derived from typical Dutch silver salts of the mid-seventeenth century. Although designed after a silver example, these salt cellars from circa 1690 and marked for Adrianus Kocx, have a chinoiserie decoration, which the painter has subordinated to its shape. The pseudo-Chinese characters in the decoration are particularly striking. With the development of dinner services in the eighteenth century, including their array of various useful and often ornamental wares, such as candlesticks, cruet stands, sauceboats and every style of dish and plate, the salt cellars became smaller and more numerous on the table.

In the middle of the eighteenth century, dining ‘à la française’ (in the French manner) was the fashion in Europe. Inspired by the French court of Louis XIV (1638-1715, reigned 1643-1715), the serving dishes were laid out on the table symmetrically and in a very ordered way for each course and guests would serve themselves from the platters, bowls or tureens within their reach. Each course provided an opportunity to display and use a variety of tablewares: plates, serving vessels and a panoply of decorative objects. At the same time, the fashion for trompe l’oeil ceramics had spread throughout Europe. The tables of the nobility and wealthy bourgeoise were adorned with brightly colored fruits and vegetables of various shapes, or with zoomorphic objects in the form of domestic and exotic animals and birds, which gave the illusion of nature, luxuriant and animated. 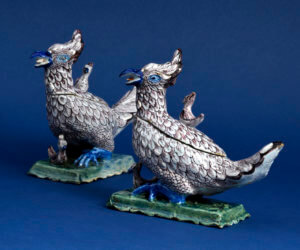 Delft potteries produced small, trompe l’oeil tureens, which functioned as serving wares and decorated the table. Zoomorphic tableware, like this pair of pheasant tureens from circa 1780 and marked for De Klaauw (The Claw) factory, most likely evolved from polychrome sugar or wax figures and bird-shaped pastries that decorated the Renaissance table. The tradition of the hunt formed the basis for the savory pies, the showpiece of the dinner table from the late medieval period and the seventeenth-century. In the eighteenth century, hunting was a popular pastime for the elite. Poultry was a common game hunted in the Netherlands. Tureens like these were a perfect, delicate substitute for the large bird pies. However, tureens of this size and decoration were probably only meant for display, since they were very difficult to produce. 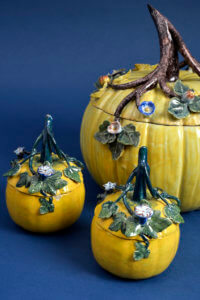 The tureens were often displayed amongst whole table services with other trompe l’ceil objects, such as brightly colored fruits and vegetables. Melons, for example, were a greatly fancied fruit during the Baroque period, appearing frequently in seventeenth-century Dutch still life paintings, and celebrated by the Delft potters. Melons were considered an edible delicacy, appreciated not only for their intense aroma and supple flesh, but also for the medicinal properties attributed to them as a cure for fevers and an antidote for in flammations of the kidney, bladder and liver. A matching faience tureen, such as this large melon tureen from circa 1760 and marked for De Drie Posteleyne Astonne (The Three Porcelain Ash-Barrels) factory, enhanced the visual delight of the trompe l’ceil ceramic pun. A large melon tureen like the present one would have been placed on the table as a single centerpiece flanked by two smaller melon tureens.

Although the dining traditions changed, it becomes clear that a dinner party given by a prosperous family in both the seventeenth and eighteenth century was a veritable feast for the senses: a gustatory treat to taste the beautifully prepared and perhaps exotic foods, and a visual treat in their presentation and in the table setting itself.