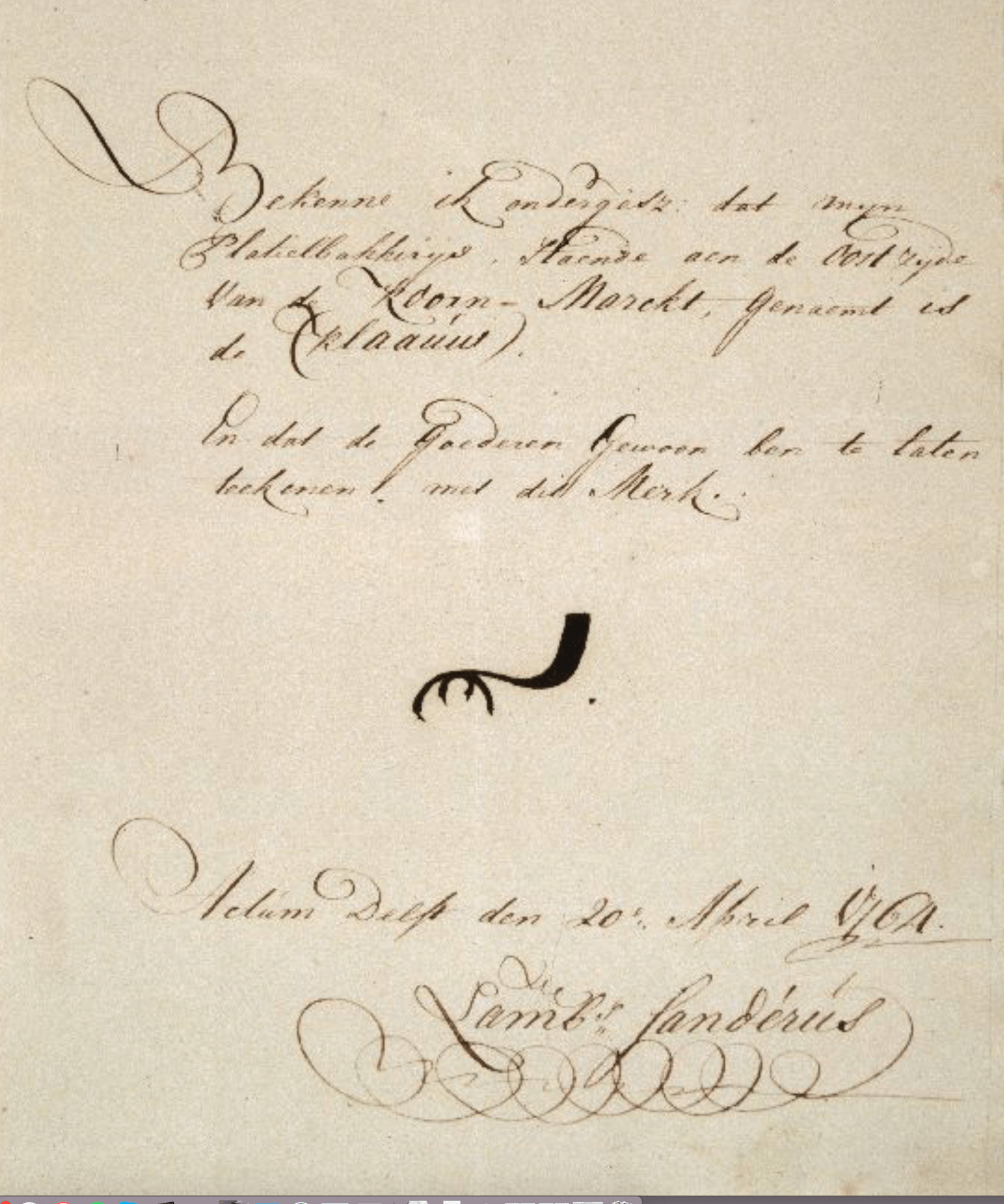 De Klaauw is among the most prosperous and longest running Delftware factories. Throughout its existence, the successive owners and managers succeeded by adapting to the changing demands of the market and the varied clientele.

In the sixteenth century, the city of Delft was famous for its textile and brewing industries. At its apogee, the city contained nearly two hundred breweries, including the famous De Klaauw brewery located in the southern part of the city. For one hundred years, the Schoonhoven family managed the brewery and malthouse. However, the production of textiles in Delft polluted the water, which was an essential ingredient for beer. Gradually, the breweries began to disappear and the remaining buildings and land were considered ideal for the establishment of earthenware factories. Cornelia Schoonhoven, probably a descendant of the original brewery family, and Cornelis Cornelisz. van der Houve converted the company into an earthenware factory in 1661. As stipulated in the contract, Van der Houve owned 1/12 of the factory and was in charge of the management. However his business partner was dissatisfied with him and in 1668, she bought his shares and carried on the business with her two sisters, Elisabeth and Maria van Schoonhoven.[1] 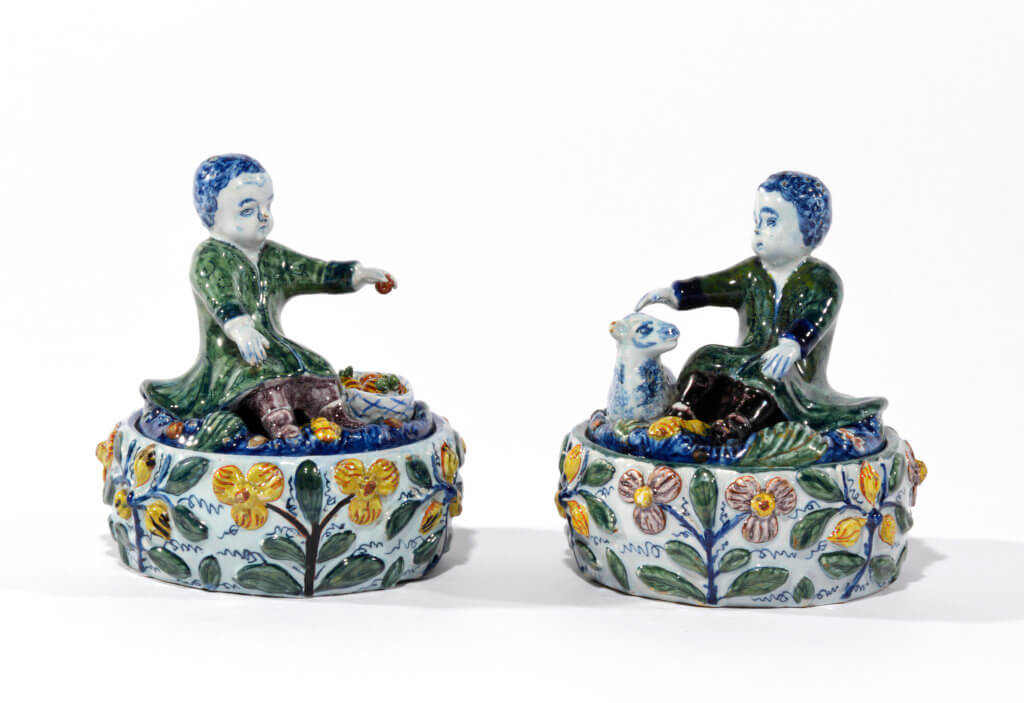 Thirty seven years later, the factory was sold to Pieter van Oosterwijck who passed away shortly after. The factory then was passed on to his widow Margaretha van der Gucht who later remarried Johannes van Lockhorst, a potter from Rotterdam. The business stayed in the family until 1740.[2] There are several marked objects known from this period that attest to the skill and knowledge of the De Klaauw factory. Surviving objects decorated with cashmere patterns and petit feu colors show that De Klaauw was aware of the new techniques and fashions and developed the know-how to satisfy a demand that was in constant evolution. Sales documents indicate the success of De Klaauw factory, and also describe the valuable contents and luxurious decoration of the building. For example, the walls of the dining rooms were adorned with cuir de Cordoue (also called cordwain), a painted and gilded (and often embossed) leather hanging. The factory owners also owned a house with a large garden, where they displayed several vases, twenty flower pots and a gilded fountain.[3] The factory is also known to have exported many of its production abroad during this period. In fact, several documents attest that the factory owners were regularly doing business in France and in England. The names of several merchants from Paris and Rouen (France) are stipulated.

The Van Lockhorts were succeeded by Dirck van Dijck, who managed the factory for nearly fifteen years and sold it to Lambertus Sanderus in 1763. He was a talented potter and seasoned businessman. During his ownership, the company expanded considerably. In 1788, he bought one quarter of interest in the paint mill De Paauw. According to several sources, the factory was trading its Delftware not only all over the country but also in Europe including Bruges, Amsterdam, Paris and Cadiz. Business seemed especially important in France.[4] During this period, the factory adapted to several types of clientele. Some middle class customers probably enjoyed the decorative plates and the well-to-do ordered more luxurious items. The factory also specialized in making very detailed figures, which required an exceptional technical mastery and artistic talent. Considering that the potters did not have a precise tool to measure the temperature of the oven, firing such elaborate pieces without any cracks was a real tour de force. Even a small mistake in the production process would irrevocably damage the final result. De Klaauw factory is known to have produced this remarkable pair of polychrome butter tubs and figural covers from circa 1770. The outstanding quality of the pieces that were produced during this period shows the exceptional level of expertise of the employees of De Klaauw factory. 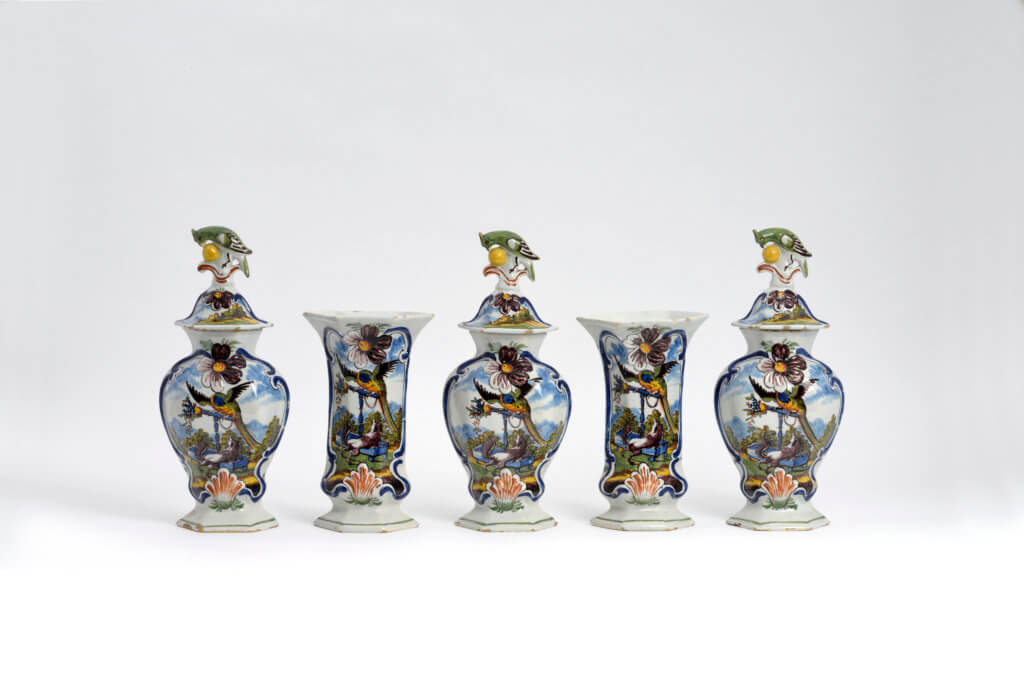 In 1764, one year after Lambertus Sanderus bought the factory, the city council of Delft issued every potter to register their trademark. This was made to avoid unfair competition. The mark of Sanderus consisted of a stylised claw and was sometimes accompanied by his initials.[5] This very rare polychrome garniture bears his mark and initials. A small dog trying to catch a perched parrot is depicted on the five vases. This design, sometimes seen on Meissen porcelain and rarely on Chinese porcelain has the distinctive style of Cornelis Pronk (1691-1759) pieces. In 1734 Cornelis Pronk, son of an Amsterdam merchant, and himself a painter and porcelain designer, received a commission by the Dutch East India Company (VOC) to design a set of plates to be produced in China. Unfortunately, the production and shipping from China was too costly, and the VOC ended its collaboration with Pronk in 1740. His designs are organized into five categories, of which the “parrot and spaniel” design belongs in the second category. 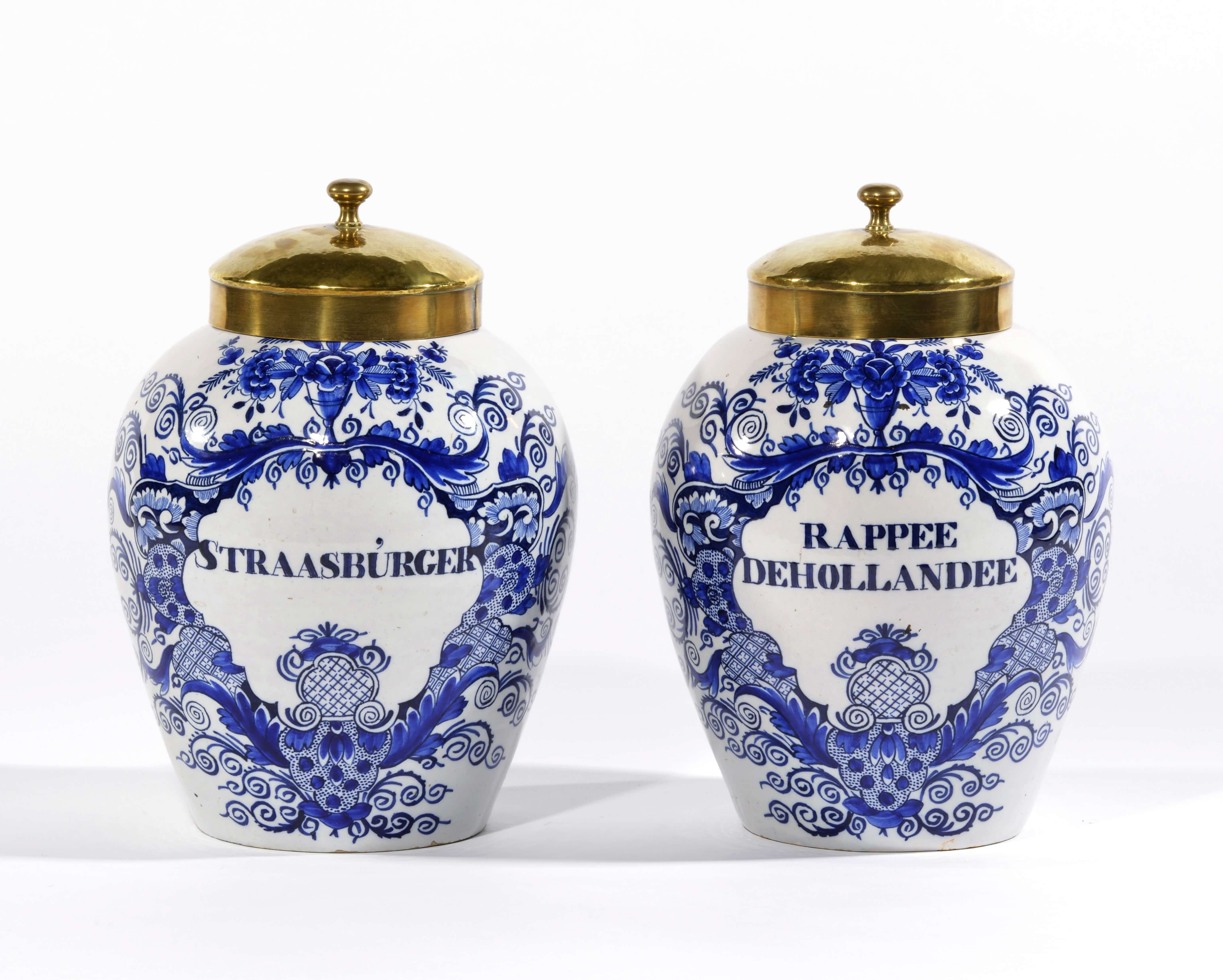 In addition to his role as a businessman, Sanderus was also a leading Delft patriot. Members of this political movement consisted of discontented burghers who were opposed to the Prince of Orange. They aimed for more individual freedom and the rights of man. In 1787, Sanderus became a member of the Delft city council and in 1795 became part of the provisional government of Delft.[6] During this period, the factory produced several tobacco jars like this blue and white pair. The tobacco leaves, already cured, fermented and dried on the plantations, arrived in Europe in the form of large rolls, which at the tobacco shops were often stored in large Dutch Delftware jars appropriately labeled with their contents. At a customer’s request the tobacco was either cut to smoke or chew, or rasped to create snuff, as is indicated on the present jar inscribed “Rappee” (from the French ‘tabac rappé’: finely grated tobacco for a strong, moist snuff). Once at the smoker’s home, the tobacco could be stored in humidors or in specially designed jars or boxes, also made of Dutch Delftware, to keep it moist.

In 1806, Sanderus decided to convert the factory into a shareholding company. According to Hoekstra-Klein, fifteen out of twenty of the company shares were sold to mainly wealthy office holders. The shares of the paint mill went to the company, which in 1840 owned half of it. Sanderus and Company produced Delftware until 1840, and was sold to Firma van Putten and Company after that date. The factory was then relocated and became part of De Drie Klokken (The Three Bells) factory.[7]

[6] A. Baggerman, Publishing Policies and Family Strategies: The Fortunes of a Dutch Publishing House in the 18th and early 19th Centuries, 2013, p. 320