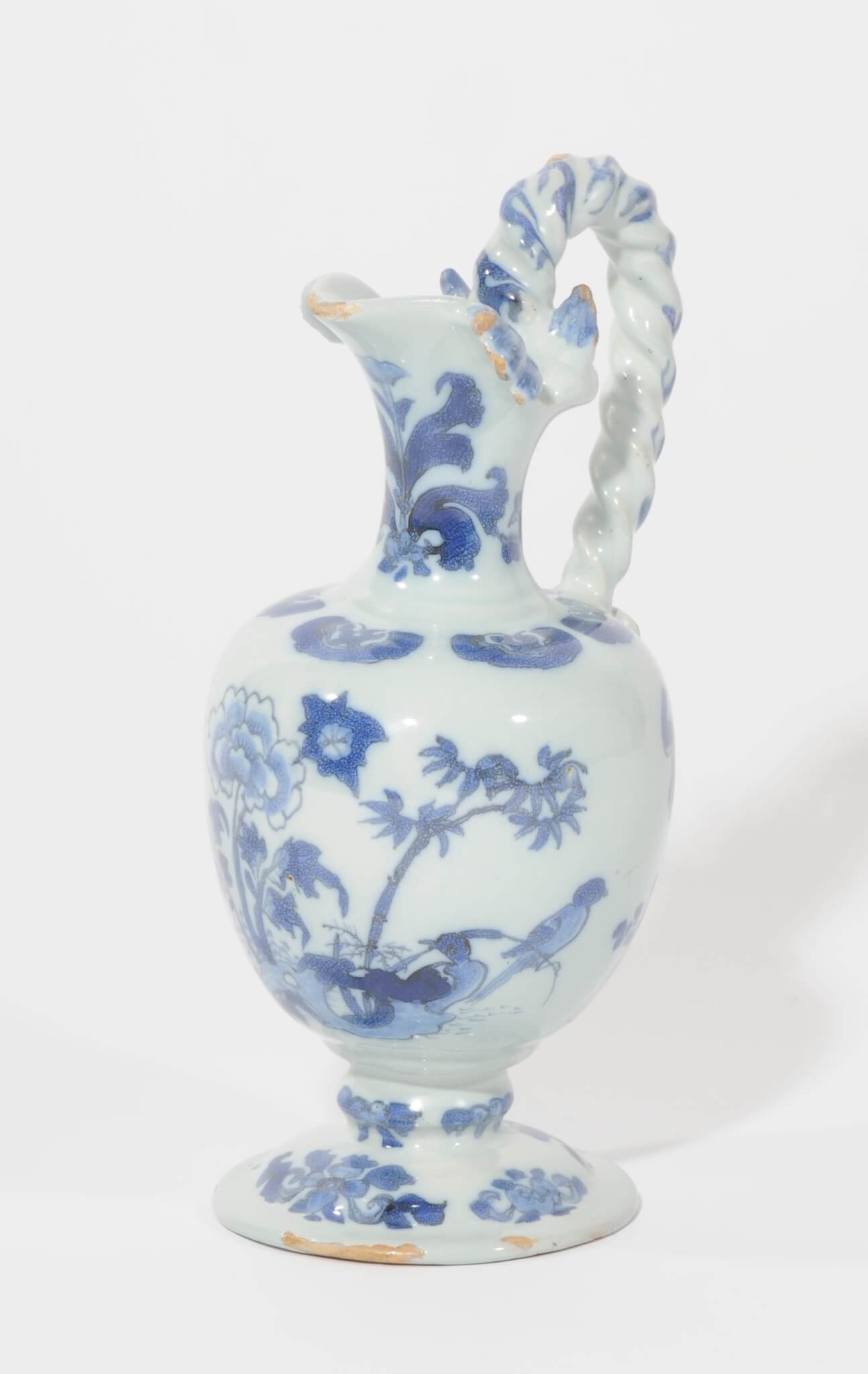 Every month we present a special object from the Aronson Antiquairs’ collection. This month we would like to show you this blue and white ewer, from circa 1685. The ewer is marked for Lambertus Cleffius, who was the owner of De Metaale Pot (The Metal Pot) factory from 1679 to 1691.

Lambertus Cleffius joined De Metaale Pot (The Metal Pot) factory as soon as his father Willem had acquired it in 1670. After his marriage in 1672, he became a shareholder of the company. Lambertus may have handled the day to day operations of the factory, while his father oversaw the business. Lambertus was registered as a plateelbakker (pottery master) at the Guild of Saint Luke since 1667. [1] According to Havard, the ceramic he created in order to obtain the title of master only took three days to complete. When his father died in 1679, he became the sole owner of the company.[2]

Lambertus Cleffius became such an unavoidable figure in the Delftware world that in 1684, he was asked to represent a delegation sent to England to negotiate the end of the embargo on Dutch ceramics. Since the third Anglo-Dutch war (1672-1674), the importation of Dutch pottery to the English territory was forbidden.[3]He also unconsciously revolutionized a change in the Delfware industry; the appearance of the maker’s mark on the reverse of ceramic objects. In 1678, he advertised in the newspaper Haarlemsche Courant, that he was not only the inventor of the red stoneware teapots, [4] but also he had discovered the secret of making oriental porcelain.[5] His proclamation surely offended Samuel van Eenhoorn and his employee Ary de Milde, who were also making such teapots. In response to the advertisement, the two potters requested a fifteen year exclusive deal to make red stoneware teapots to the States of Holland. Although the request was denied, the States of Holland implemented a system of marks in order to prevent counterfeiting. As a result, many Delft potters registered their marks, which became immensely useful for art historians and collectors.[6] The various Delft factories then began to form unique identities and styles that would distinguish their works from other makers.

Unlike his contemporaries, whose production is characterized by horror vacui, Lambertus Cleffius preferred spare decoration, as can be seen on this ewer. Although the shape was already known in the Netherlands in silver or pewter in the early seventeenth century, it is thought that the Delft potters adopted the shape from Nevers faience models, which in turn had borrowed their inspiration from Italy.

Italian faience examples of this shape, with additional grotesque masks on the body beneath the handle, have been excavated in Holland. The twisted handles and chinoiserie decoration, which can be seen also on Nevers, show a closer resemblance to the Delft versions. Trading between Delft and French ceramic centers did exist as early as 1665, when Willem Cleffius, the father of Lambertus, together with Wouter van Eenhoorn, tried to collect payments due from the brothers Révérand, French dealers who had bought Delftware.

The Nevers prototypes for these ewers, referred to as aiguières religieuses, are thought to have had a similar ecclesiastical use. The Delft ewers of this type, however, seem to have had a secular, decorative function, and some even have a royal connection. In the garden of Palace Het Loo in Apeldoorn, adjacent to the cellar dairy of Queen Mary II (1662-1694), fragments of a ewer with a similar handle and top of the neck have been excavated. A monumental ewer on a pedestal, with an applied mask on the spout and beneath the twisted handle, its terminals formed as snake heads, produced circa 1690-1700 by Adrianus Kocx of De Grieksche A factory, is in the Royal Collection at Hampton Court Palace, the London residence of William and Mary’s dual reign. The baluster- shaped ewers of this type decorated with lambrequin motifs might have been the objects described as: “twe kanen met gedreyete handgreepen, alles met Frans puyntwark” (“two ewers with twisted handles, all with French lappets”), which were part of a “hoog cabinetstelsel” (“high cabinet set”) in the inventory (1688/1694) of Henriette-Amalia van Nassau-Dietz. Finally two large baluster- examples marked for Lambertus Cleffius are part of the dinner service of Wenzel Ferdinand, Prince Lobkovic, as cited below.

[4]  They were created with the intention to imitate the Chinese Yixing teapots.

[5]  The elusive “Arcanum,” which, in fact, was not discovered in Europe until 1708 by the young alchemist, Johann Friedrich Böttger at Meissen near Dresden.

Blue and White Ewer
Delft, circa 1685

Marked LC and X in blue for Lambertus Cleffius, the owner of De Metaale Pot (The Metal Pot) factory from 1679 to 1691, and with a molded numeral VI

The ovoid body painted on the front with a bird perched on a blade of grass arching over a rock amidst peonies and bamboo, and on the sides with a bird either similarly perched on a grass amidst chrysanthemums, or flitting above a flowering prunus branch, all beneath a border of six ruyi-heads on the shoulder, the flaring cylindrical neck with a foliate device beneath the fringed spout and affixed at the back with a rope-twist handle, and the domed foot with two floral sprigs alternating with two ruyi-head devices issuing scrolls.