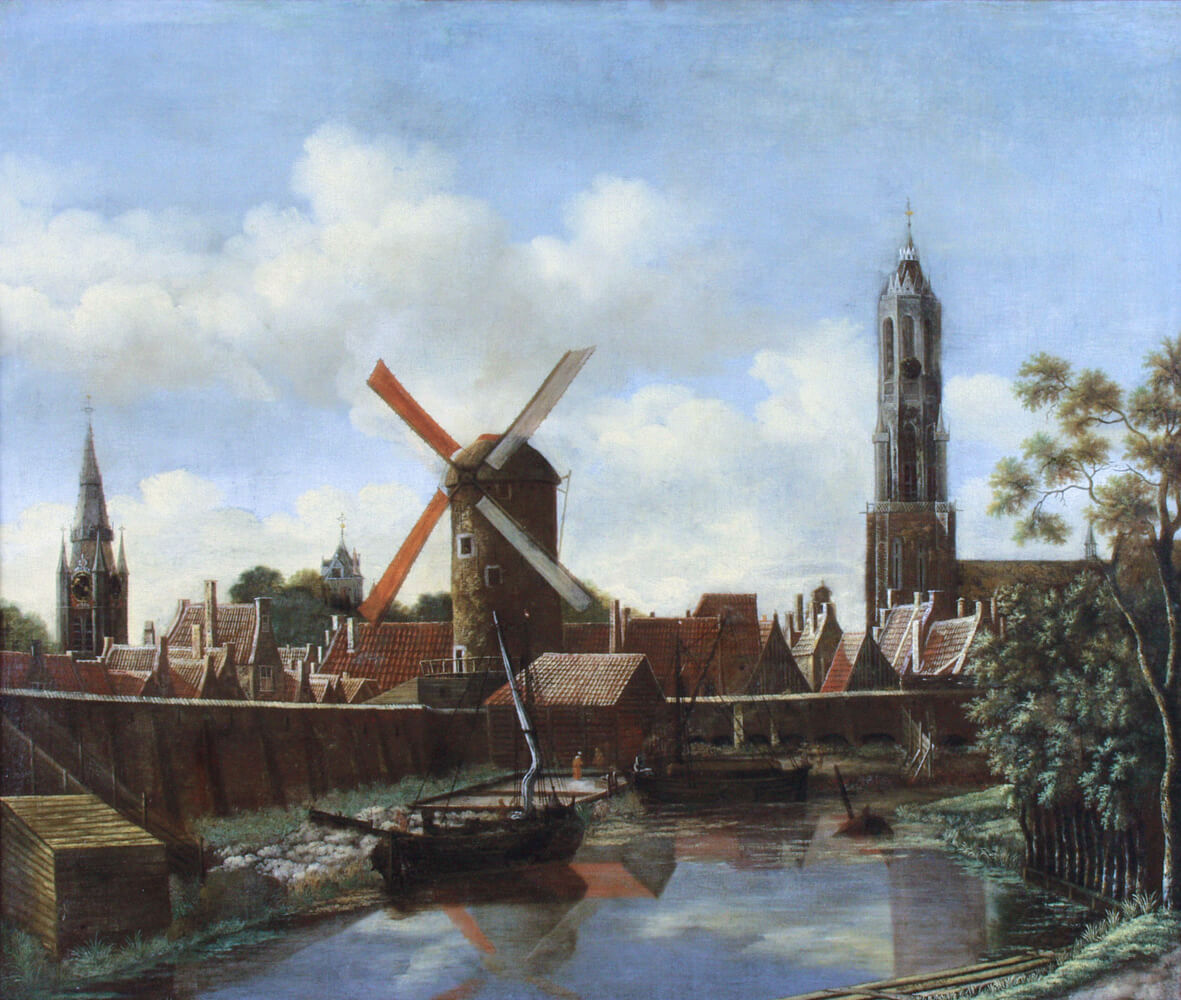 The windmills that dot the landscape of the Netherlands are as familiar as the local tulips, wooden shoes, and cheese. While they are visually charming and recall a past era, the invention of windmills shaped the Netherlands and its inhabitants.

Windmills have existed in many different shapes in Europe since 1050. Structural mills with horizontal axes were first mentioned in Spain and France, followed by Flanders and southern England. From 1180 onwards, mills with vertical axes were found in the Netherlands. The unique form featured a “spil” (windlass) so the pennons or wicks could be turned when the wind shifted, ensuring that the best winds were caught. The new mills could run at different speeds and they were divided into several floors, so the energy could be distributed into multiple activities.

In the seventeenth century, wind energy played an important role in the economic prosperity of the Golden Age. After the invention of the crankshaft, the turning motion of the windmill’s central axe could be diverted into an up-and-down motion, enlarging the possibilities of use. Windmills were used for a wide variety of purposes: grinding grain, spices or tobacco with the rounding motion of the millstone, trampling textile fibers in the paper industry, sawing wood with the up-and-down motion, and pumping water with the propellor shaft in dye-houses. The grinding and trampling functions of windmills were also vital to the Delftware industry in the production of paint. Windmills also changed the physical landscape of Holland; they were used to drain embanked areas of land creating polders.

Several paintings of Delft document the mills that shaped the city landscape. At least eight mills of varying sizes are visible in the painting View of Delft from the northwest by Hendrick Cornelisz Vroom (1562-1640), painted circa 1615. Port of Delft, painted by Daniël Vosmaer (1622-1669) between 1658 and 1660 illustrates several views of the city of Delft. It shows the city walls and the Sprengmolen (Stone mill) or Torenmolen (Tower mill) prominently at the center of the composition. The stone tower mill in the painting by Vosmaer was part of the Rouaan factory. The mill originated as a tower mill from the beginning of the middle ages, and was situated on the Bastiaensvest at the south of Delft as part of the city defences. The wooden constructions seen at the base of the city walls in the painting were called “aardewasserijen.” These small outposts near fresh water were used to purify the clay before it was processed into potters-clay. To the left, white heaps of clay are waiting to be processed. Two ships are anchored in the harbor, either to deliver supplies of wood, clay or minerals for the glazes, or waiting to be loaded with finished Delftware products. At one point, the city of Delft had more than 15 mills, however there is only one that stands today, named “De Roos” (The Rose). A mill has occupied this site in the Phoenixstraat (Phoenix Street) as early as 1352, first bearing the name “Gasthuismolen.” De Roos stone mill has been standing since 1679. As of February 2015, the mill continues to work, grinding grain, rye and spelt. It is tempting to think that De Roos factory could have used this mill to grind their pigments and other materials.

Grinding the Glazes
The ingredients to prepare the glazes and paints arrived as raw materials. They were partially processed at the Delftware factory itself, and the mill played an important role in the process. Masticot (a mixture of sand, salt and soda) was primarily used as a neutral base, both for the important white tin glaze, and for the transparent lead glaze known as “kwaart.” The masticot and the mixture for tin glaze (consisting of masticot, smalt, copper filings, and tin ash) were placed under the oven. The masticot was shaped into a dyke, keeping the melting and liquefying tin glaze together. The two mixtures were fired during the regular firing of the earthenware objects. Both the hard tin glaze and the porous masticot were then taken to the mill to be ground and trampled. 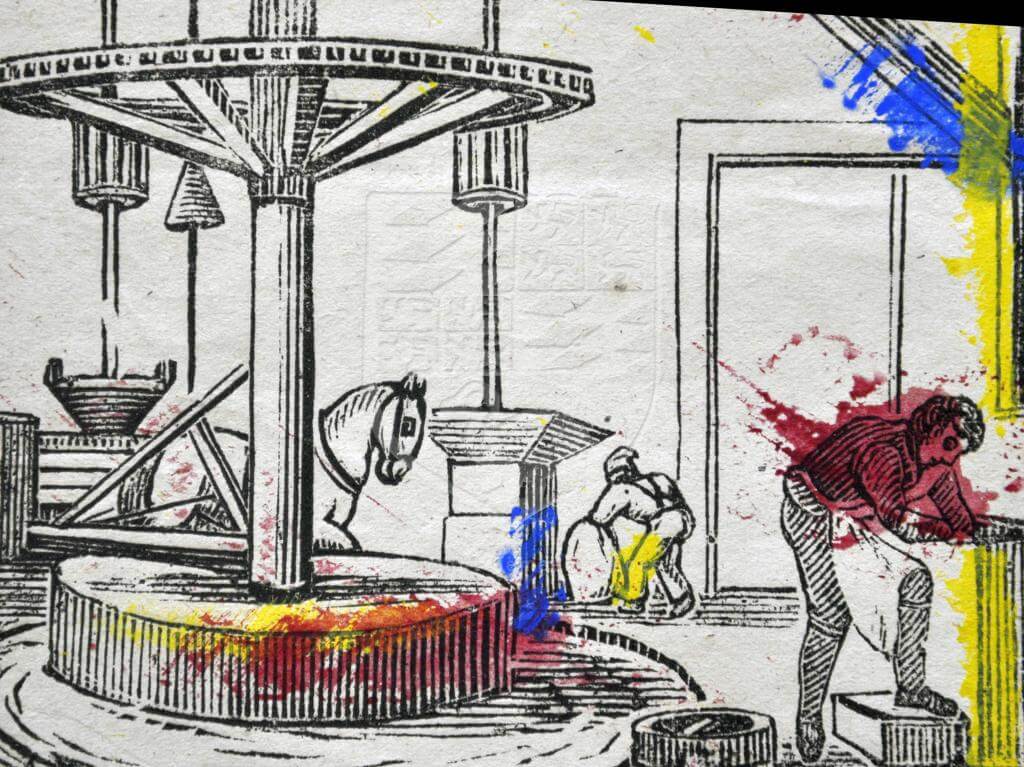 The mill was also a crucial tool in obtaining white lead, part of the lead glaze. The white flakes of lead-oxide were ground at the mill, mixed with chalk, and formed into cone shaped loaves of white lead. This substance, known as “goudglette,” together with masticot, potash and salt was part of the mixture that was baked at the bottom of the oven, just as was done with the tin-glaze mixture. After cooling down, the very hard slab of glaze-material was brought to the mill to be ground into a powder.[1]  The grinding of the glazes could be done at the factory in a horse powered mill called “rosmolen.” A horse mill would have had a central axe turned by one or more horses. The horses were strapped to beams and circled around the central axe. This nineteenth-century penny print illustrates how a horse mill operated. Factory De Ham (The Ham) was one Delft pottery in the possession of such a horse mill. The large windmills of the city of Delft also worked to grind glazes. These mills had an upright, vertical flat round stone that ran on its edge on a horizontal slab of stone. Weighing about 5 to 7 tons, these stones pulverized the minerals and stone chunks into chalk, umbers and ochres. To prevent the colors from mixing, the sets of stones (some mills had as many as four sets of stones) were placed in a closed room or chamber, the “kamer.” The rooms were often named after the main colors that were ground there, for example the red chamber, yellow chamber and poison chamber. The poison chamber may have been used for the preparation of poisonous pigments such as white lead and copper oxide.[2]

The mills also prepared the colored pigments. These pigments, also called “kleine verven” (small paints), were ground less frequently, because the amounts needed in the factories were smaller than the blue pigments and the lead and tin glazes. Red was made of bolus, a red earth (the iron red applied in the 18th century could not resist the high temperatures of the oven), but the other colors consisted mostly of a mixture containing a metalloid: copper oxide for green, iron oxide for brown, manganese oxide for purple, antimony for yellow, and cobalt (oxide) for blue. To get the blue color, cobalt oxide was melted with glass. Cobalt oxide could not be mixed with water or oil, but the color did melt with glass at high temperatures. This ‘smelt’ was broken and ground to get a fine powder. Finally, this powder was deluged in water to get a liquid paint. 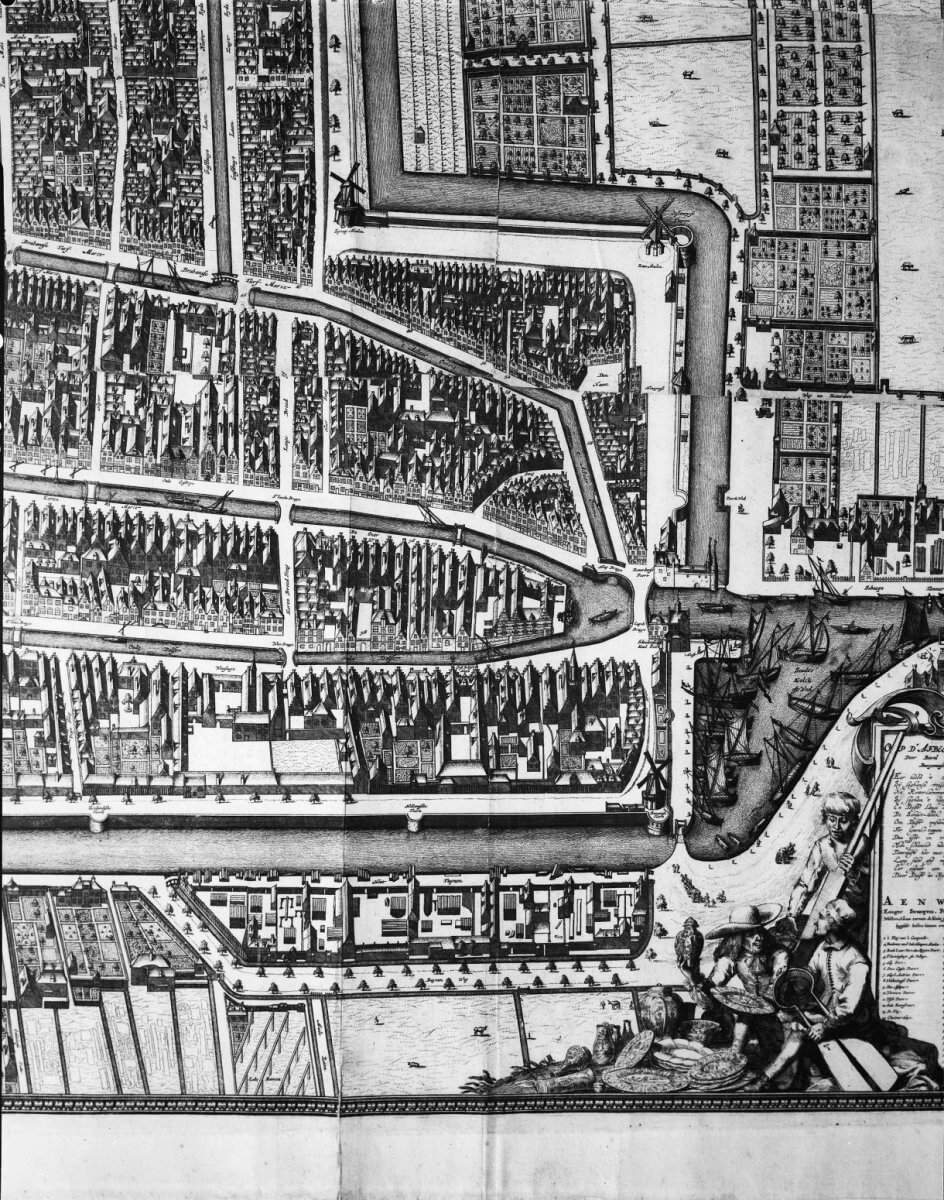 Another windmill, named De Paauw (Peacock) was explicitly called a “witmolen”, (white mill) in contrast to the more general term “verfmolen” (paint mill). De Paauw was situated east of Delft, where the Kromme Wetering and the Pijnackerse Vaart waterways met, and was part of a group of four white-mills, all situated at these waterways. This wind powered white mill was used to pulverize components for several Delftware factories, such as De Paauw (The Peacock) and De Drie Klokken (The Three Bells).[3] It was not uncommon for factory owners to team up and own a mill or windmill together. For example, in 1775 this same mill was bought in a partnership between the owners of De Drie Klokken (The Three Bells) factory, the Porceleyne Lampetkan (Porcelain Ewer) factory and the Porceleyne Schotel (Porcelain Dish) factory.[4]

De Grieksche A Mill
De Grieksche A Mill was situated at the Kromme Wetering outside the city of Delft. The paint or white mill was part of De Grieksche A (The Greek A) factory. At first, Wouter van Eenhoorn, in charge of De Grieksche A factory, had his paint ground at the mill of Pieter Gerritsz van Durven, but he was not happy with the quality. He then bought his own mill in 1661, called De Grieksche A mill. In 1679, the Posteleyne Astonne (Porcelain Ashbarrels) factory used the mill of De Grieksche A factory to grind paints. In an agreement between Gerrit Pietersz Kam, owner of the Posteleyne Astonne factory, and Lambertus van Eenhoorn, it was decided that the miller should have ready at any time 16 barrels of white, one barrel of blue and one “binnenverfkuip”, open and ready, although it remains unknown what this was for. Lambertus Cleffius, owner of De Metale Pot (The Metal Pot) factory, also used ‘The Greek A’ mill to mix his paints, and at the mill of Pieter Gerritsz Durven, De Hollandsche Tuin.