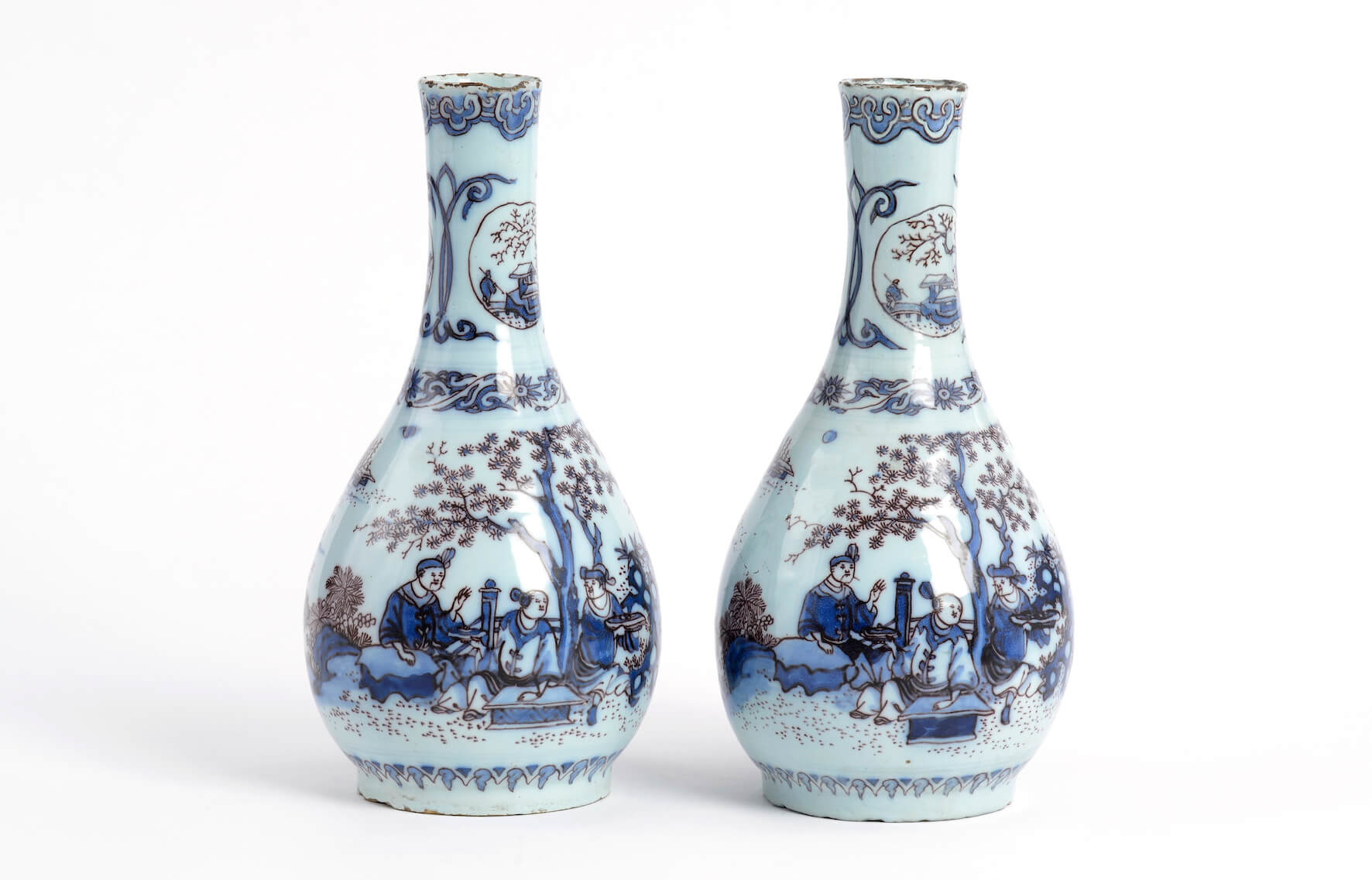 Despite the Portuguese importations of Asian goods starting in the early sixteenth century, Chinese porcelain was rarely seen in Europe before 1600. The small quantities of porcelain that were imported to Europe were rare and expensive, and almost exclusively collected by the nobility. In 1600, the market for Chinese porcelain changed significantly when the Dutch opened trade with Asia with a few small trading companies in Holland and Zeeland. The traders eventually merged to form the Dutch East India Company, the Verenigde Oost-Indische Compagnie (VOC) in 1602.[1] At first, the VOC mostly imported spices and small quantities of other Oriental products, such as porcelain.[2] The first two large cargos of Chinese porcelain to reach Holland came on Portuguese ships that were captured by the Dutch in 1602 and 1603. The cargos also contained spices, silks, and musk.[3] The one thousand pieces of porcelain within the cargos were auctioned in Middelburg and Amsterdam and fetched great profits. The VOC’s successful sale of its Chinese porcelain ignited the interests of the Dutch people, and the company focused greater attention on Chinese goods.[4]

From approximately 1605 to 1635, the VOC mostly imported Chinese porcelain known as ‘Kraakporselein’ (Kraak-porcelain) to Holland, a name that possibly derived from the Portuguese ships called ‘caraccas’. One characteristic of the early imports are the foliated rims on the plates and dishes, which were typically made in molds. Further, the pieces were lightweight due to the thin walls of the vessels. This was advantageous because the Chinese export tax was based on the object’s weight. The decoration, always in underglaze cobalt blue, is characteristically divided into alternating wide and narrow panels, which contain Buddhist and/or Daoist symbols. The central panel often shows landscapes or riverscapes with deer, birds and large flowering plants. Early imported objects also included bottles, covered boxes, kendis, ewers and jars.[5]

Before the importation of Chinese porcelain, the Dutch used locally made earthenware or majolica. Both the technique and the decorative style of majolica were strongly influenced by potters from Antwerp, who in turn borrowed from Italian models.[6] The demand for majolica decreased with the arrival of Chinese porcelain in the early seventeenth century, which had a number of superior traits to the Dutch ceramic in composition and function. Majolica plates and dishes were covered with a lead glaze on the back, while the front was covered with a layer of tin-oxide glaze that turned opaque white after ring. Conversely, Chinese porcelain had a clear color, and a smooth and shiny nish. Porcelain was also made from a specially sourced clay body and was red at a high temperature. This produced an extremely strong and compact finished product. Unlike majolica, Chinese porcelain could withstand hot liquids because of its higher firing temperature.[7] The limited color scheme of blue and white, unlike the colorful majolica, did not seem to deter interested collectors.[8] Chinese porcelain was more costly than crystal and was also considered more valuable due to its exotic and far away origin.

Dutch potters could not produce real porcelain because they did not have access to the indispensable kaolin (China bone). It was not until 1709 that the European potters discovered how to produce porcelain. Instead, the potters had to invent news ways to revitalize their business. Some majolica potters decided to give up their craft and liquidate their business, while others concentrated on other areas of the market. There was also a group of potters that began to imitate Chinese porcelain. Although it was impossible to create a perfect imitation of the exotic objects (due to a lack of specific raw materials), the potters – after overcoming several technical complications – successfully improved the majolica to more clearly reflect Chinese porcelain. This development took place around 1620, with potteries in Haarlem and Delft as the leading innovators. It was in those cities that Hollandts porceleyn (or Delffse porceleyne) was first produced, as the new pottery was somewhat misleadingly called.[9]

Throughout the seventeenth century, Delft potters created faithful imitations of the Chinese Kraak-porcelain from the Wanli period (1573-1620) for table use and for decorative purposes.[10] The paneled border, which was characteristic for the Chinese Kraakwares is precisely imitated on the Delft plates. The center is often decorated with urns of flowers, fruits and precious objects, animals such as peacocks, water birds or deer, or with a Chinese scene. Although Kraak-style borders can be found on Dutch majolica at the beginning of the seventeenth century, it was from the mid-seventeenth-century onward, when civil unrest in China caused a shortage of Asian porcelain, that the full decoration of the Kraak-wares was more frequently reproduced on Delftware. At the same time, the VOC managed to gain a foothold on the island of Formosa, present-day Taiwan. It was not part of the Chinese empire and the Dutch fully exploited its strategic situation. An entrepot to trade in Chinese goods was established, assuring the VOC a regular supply of goods and establishing a clear trade policy. Kraak-porcelain was shipped in larger quantities as the export trade increased, and the porcelain wares became widely distributed in Dutch homes.

Between 1630 and 1640, porcelain wares of a superior quality were imported in Holland, known as “transitional wares.” The term refers to the political changes in China that transpired after the death of emperor Wanli (1619), which ultimately led to the fall of the Ming and the establishment of the Qing Dynasty (1644).[11] These types of wares have a thicker body, are better formed than Kraak and have a beautiful, smooth glaze. The finely painted representations are often narrative and were copied from woodblock print illustrations in Chinese novels or scenes from theatrical plays.[12] In comparison with the Kraak-wares, the transitional wares were no longer divided into panels. Instead, the entire area was covered with a continuous scene that often consisted of landscapes with animals or gures either conversing or in a moment of spirited action.[13] The Delftware painters adapted the scenery on transitional wares for their own decorations of gural subjects, possibly placed on a terrace or pavilion or even as horsemen, in a landscape of rock work and pine trees. Other characteristic elements that were copied on Delft earthenware are borders of stylized lotus-leaf shaped panels, pointed leaves and the tulip motif which was often used to decorate the neck of vases and ewers.

A unique type of decoration evolved from these different Chinese styles, which is freer and shows the Delft interpretation. Chinese figures, landscapes, architecture and attributes are rendered and composed in a way that is not Chinese, but semi- Chinese: Chinoiserie. This style originated in the seventeenth century and quickly became a dominant fashion throughout Europe, enduring through the first half of the eighteenth century.[14] The faience painter choose especially the elements which were in his eyes the most characteristic for the exotic Far East and he combined it as he wished. Besides Chinese porcelain, another source of inspiration were the copper engravings in popular descriptions of China by Johan Nieuhof and Olfert Dapper. Delftware is one of the first Dutch examples of Chinoiserie, which through its export contributed to the development of the style in Europe.

[3]  The first ship was called the Sao Tiago, which had not only spices on board but also objects bought by the Italian trader Carletti, who did business in China. The second ship was the Santa Catarina. Scholten 1993, p. 17.

[6] Some of the potters emigrated to England, Germany or Spain, but a more significant number left for the northern Netherlands. Jörg, 2011, p. 14.

[9] Because of the appearance of the ware, this name was justifiable, even though it was not actually genuine porcelain. The rst porcelain was yet to be made in Europe almost a century later. Scholten 1993, pp. 19-22.