Although the origins of Dutch Delftware lay partly in majolica, which was based on southern European models, the seventeenth century also shows a strong Chinese influence on the Dutch pottery. This has of course everything to do with the arrival of the Chinese porcelain on the Dutch market in the same century, which had an immense consequence for the Dutch ceramics.

Portugal had already dominated overseas trading between Europe and Asia since 1498, the year in which Vasco da Gama discovered the sea route to the East. It were the Portugese who brought the first Chinese porcelain to Europe.[1] But this Portugese trading monopoly came to an end with the arrival of the English and the Dutch on the scene in about 1600.[2] At first there were various Dutch traders, but to restrict the competition as much as possible the Dutch East India Company (Verenigde Oostindische Compagnie – VOC) was founded in 1602. Most of the goods they imported were spices, but other oriental products, such as porcelain, were included in smaller quantities.[3] The first two large cargos of Chinese porcelain that reached Holland, came on Portugese ships which were captured by the Dutch in1602 and 1603. The cargos conssted of spices, silks, musk and porcelain.[4] The thousands pieces of porcelain were auctioned in respectively Middelburg and Amsterdam and fetched great profits. These two events awoke the interest of Chinese porcelain in Holland and from then on the VOC focussed attention on China.[5] 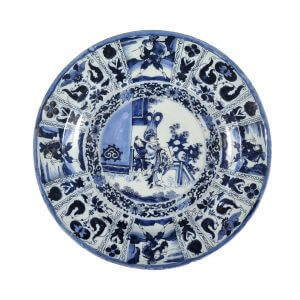 These first pieces of Chinese porcelain were called ‘Kraakporselein’ (Kraak-porcelain) in Holland, a name which possibly derived from the Portugese ships which were called ‘caraccas’. With the arrival of the Chinese porcelain the demand for the raw objects of the Dutch majolica potters decreased. The Chinese porcelain was (due to high temperature firing of a special sort of clay) extremely strong and compact. Not only was it very thin, but it was also well suited to withstand hot liquids because porcelain can be fired to a much higher temperature than majolica.[6] Furthermore it had a clear colour, a smooth finish and it was shiny. In addition, it was considered as more costly than crystal and the fact that the wares came from a far and unknown land, gave the Chinese porcelain a special value for collectors. That the colours were limited to a white and blue colour scheme, instead of the richly coloured majolica did not seem to be any problem.[7]

Since the Dutch potters did not have the indispensable kaolin (China bone) to their’s disposal, it was impossible for them to create real porcelain. However, the potters had to invent news ways to revitalise their part of the market of luxury ceramics. Where some majolica potters decided to liquidate their business and to give up their craft, others concentrated on other areas of the market, such as the production of tiles, which were not made in China. Another group decided to produce a cheap earthenware product in order to aim at a another market, lower down the social scale. These dishes and plates were often decorated similar to the designs used on tiles, which were contemporary and less innovative.[8]  Although this led to less well-finished objects, it also resulted in a favourable price difference with the Chinese porcelain.[9]

A fourth group of potters made another choice: they started to imitate this so sought-after Chinese porcelain. Although they tried to imitate these exotic wares, they did not succeed in this (due to the lack of the right raw materials), and so they aimed at a sort of pottery that would be difficult to distinguish visually from the Chinese objects.[10] This was the beginning of – as they called it at that time – Delffse porceleyn, or as it is known nowadays as Dutch Delftware.

Inspired by the Chinese Kraak-porcelain from the Wanli period (1573-1620)the Delft potters throughout the seventeenth century and in the beginning of the eighteenth century created faithful imitations which have been made for table use and for decorative purposes.[11] Not only the colour scheme, but also the type of decoration was adapted promptly by the local potters. Characteristic for both the Chinese and the Delft Kraak-style is the panelled border of Daoist and/or Buddhist motifs alternating with floral or peach motifs. The center is often decorated with either urns of flowers, fruits and precious objects, animals such as peacocks, water birds or deer, or with a Chinese scene. Although kraak-style borders can be found on Dutch majolica as early as the beginning of the seventeenth century, it was from the mid seventeenth-century onward, when civil unrest in China caused a shortage of Asian porcelain, that the full decoration of the kraak wares was more frequently reproduced on Delftware.

[2] Since Portugal was annexed by Spain and thus became involved in the Eighty Years war, King Philip II closed the Portugese ports to Dutch ships in 1595. This however made the Dutch to go to the East to establish their own trade. Scholten, F.T. exh.cat. Dutch Majolica & Delftware, The Edwin van Drecht Collection, 1550-1700, The Hague (Paleis Lange Voorhout) 1993, p. 16.

[4] The first ship was called the Sao Tiago, which had not only spices on board but also objects bought by the Italian trader Carletti, who did business in China. The second ship was the Santa Catarina. Ibidem.

[5]Based on official records of the VOC, more than three million pieces of porcelain must have been shipped to Holland by the VOC between 1604 and 1657. Ibidem.