In 1866, the Patriotische Gesellschaft founded The Museum für Kunst und Gewerbe (MKG) in Hamburg, Germany. The institution was initially formed as a repository of both historical and contemporary examples of design to inspire producers of arts and crafts and industrial designers. Later in the first half of the twentieth century, the museum expanded to include outstanding artifacts from 4,000 years of cultural history.

Today, the MKG continues this mission with its collection of over 500,000 objects, from art, sculpture, textiles, graphic design, fashion and musical instruments. Further, it houses one of the largest collections of ceramics and porcelain in Germany, totaling nearly 11,000 objects from antiquity to the present. The culturally diverse group of ceramics and porcelain showcase a variety of uses and types, and include objects from Meissen and Höchst, imperial porcelain from China and ceramics made by famous artists, such as Pablo Picasso. The collection offers an insight into the long history of the production of material and technical progresses.

The ceramic collection also houses a wonderful Dutch Delftware object: a blue and white bowl-shaped flower vase with cover. Marked for Adrianus Kocx of De Grieksche A factory, it was produced at the end of the seventeenth century. The Delft potters developed many different shapes of flower vases and the earliest versions consisted of a fluted tank on a base with two handles, rather similar to the present vase. Although it is an early flower vase, it is distinctively modeled and painted in the fine manner characteristically seen under Adrianus Kocx’ ownership. The bowl and cover are delicately painted with hunting scenes. The ten spouts along the side of the cover resemble open-mouth monstrous heads, which together with the open-mouthed dragon or phoenix-shaped handles, gives the vase an exotic character that would have appealed to the prevailing tastes. 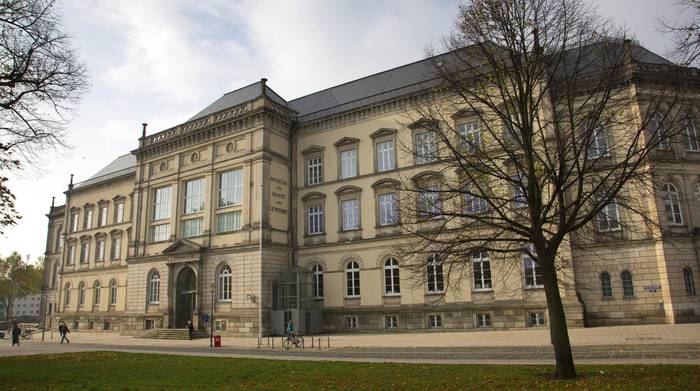