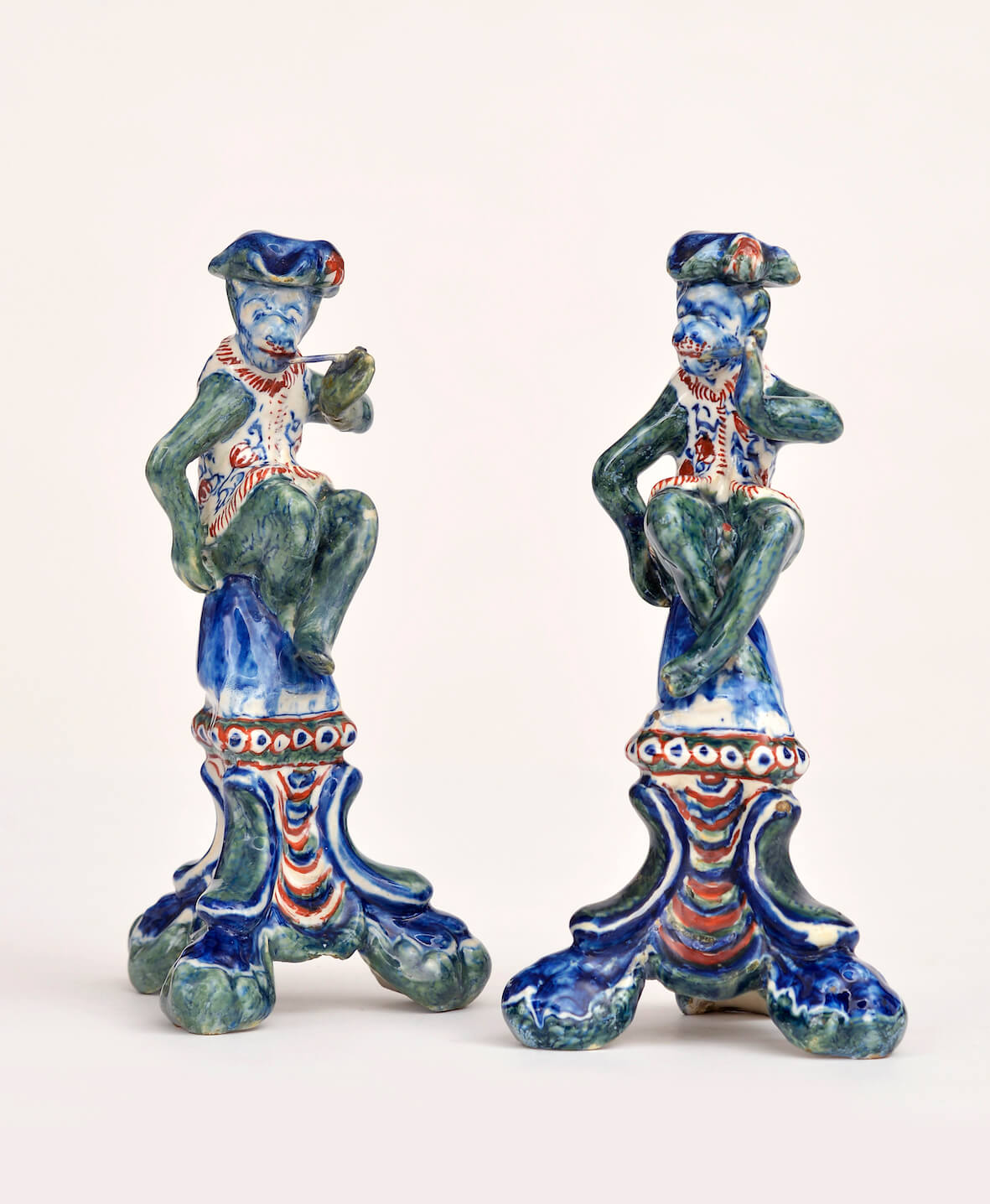 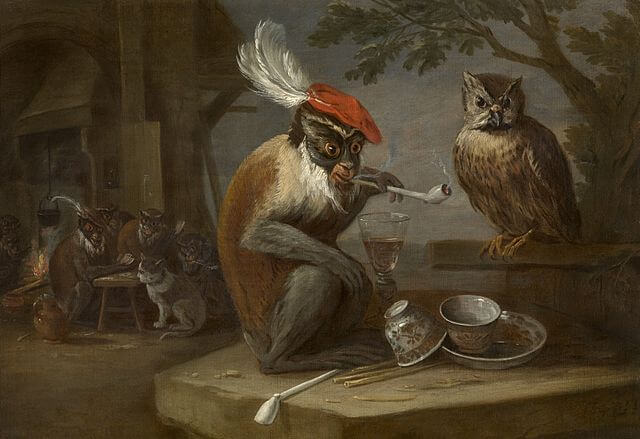 With their high intelligence and their humanlike behaviour in which we can recognize our own, monkeys and apes were either loved or hated.In art, from the fourteenth throughout the seventeenth century, monkeys were not so much targets of ridicule themselves, but were used to point out the idiocies of human endeavour. Especially the Flemish engraver Pieter van der Borcht (1604-1631) with his 1575 series of singer prints, Jan Brueghel the Elder (1569-1625) and the brothers David Teniers the Younger (1610-1690) and Abraham Teniers (1629-1670) produced a lot of prints and paintings featuring monkeys involved in the pursuits of everyday life, turning this type of painting into a official genre. During the Baroque period, singerie became very popular, the genre fitting so well into the frivolity of the Rococo style.[1]

French artists and designers of decorations as Jean de Bérain the Elder (1637-1711), Claude Audran III (1657-1734) and Christophe Huet (1700-1759) became famous for their decoration schemes in which dressed monkeys are included. Huet’s set of numbered drawings of monkey musicians was used for the much imitated Meissen porcelain Affenkapelle, monkey orchestra. This 19-piece monkey set was modeled by Joachim Kaendler (1706-1775) in 1746, and in 1753 supplied by the Paris marchand-mercier (merchant) Lazare Duvaux to Madame de Pompadour, the official mistress of Louis XV (1710-1774). Since Delftware figures of apes can be found at the beginning of the eighteenth century, the Delft potters were probably not inspired by the Meissen set. Their figures derived from the designs mentioned above, or earlier prints that served as source of inspiration, such as the paintings of David Teniers the Younger. For example, the painting Monkey Trick which shows an ape lighting his white clay pipe.

A lovely Delft example is a pair of ‘cashmire’ palette seated monkeys, marked LVE for Lambertus van Eenhoorn, owner of De Metaale Pot (The Metal Pot) factory from 1691 until 1721.  Each monkey is seated on a rock, wearing a tricorn and white vest decorated with flowers, holding a long-stemmed pipe in its left hand, looking rather human.

Once established as the rage in France, where its satirical freedom and its playful exoticism were so akin to the court culture, singerie spread rapidly around Europe, but with few exceptions it did not have the same fashionable effect – at least not in ceramic representations. In the Netherlands, where the love for everything exotic was evident, and where the population was willing to laugh at its own foibles, Delftware figures of monkeys behaving as humans are rare. This is surprising, since it would be expected, that monkeys, along with apes, being our closest cognates in the animal world, could be the perfect medium for the satirising of society, which so often thinks itself ‘above’ the animal kingdom. As already pointed out, ‘monkey business’ in paintings and prints was popular, but in figures, the Dutch favored fishermen, farmers, fruit sellers and cleaning ladies, derived from daily life. That is what makes this polychrome group of two monkeys so rare and special: it shows two brown monkeys, one wearing a colored spotted waistcoat seated on a brown rock with his hands on his thighs and his head bent backwards, while the other one, wearing a blue-striped robe, has both hands over the open mouth, suggesting that it is pulling a tooth. Dated to circa 1715, it is one of the unusual examples of singerie in Dutch Delftware. A probably well-known print of a monkey quack selling his dubious salves and tinctures to his assembled audience, accompanied by a monkey dentist might have been the inspiration for this unusual group. 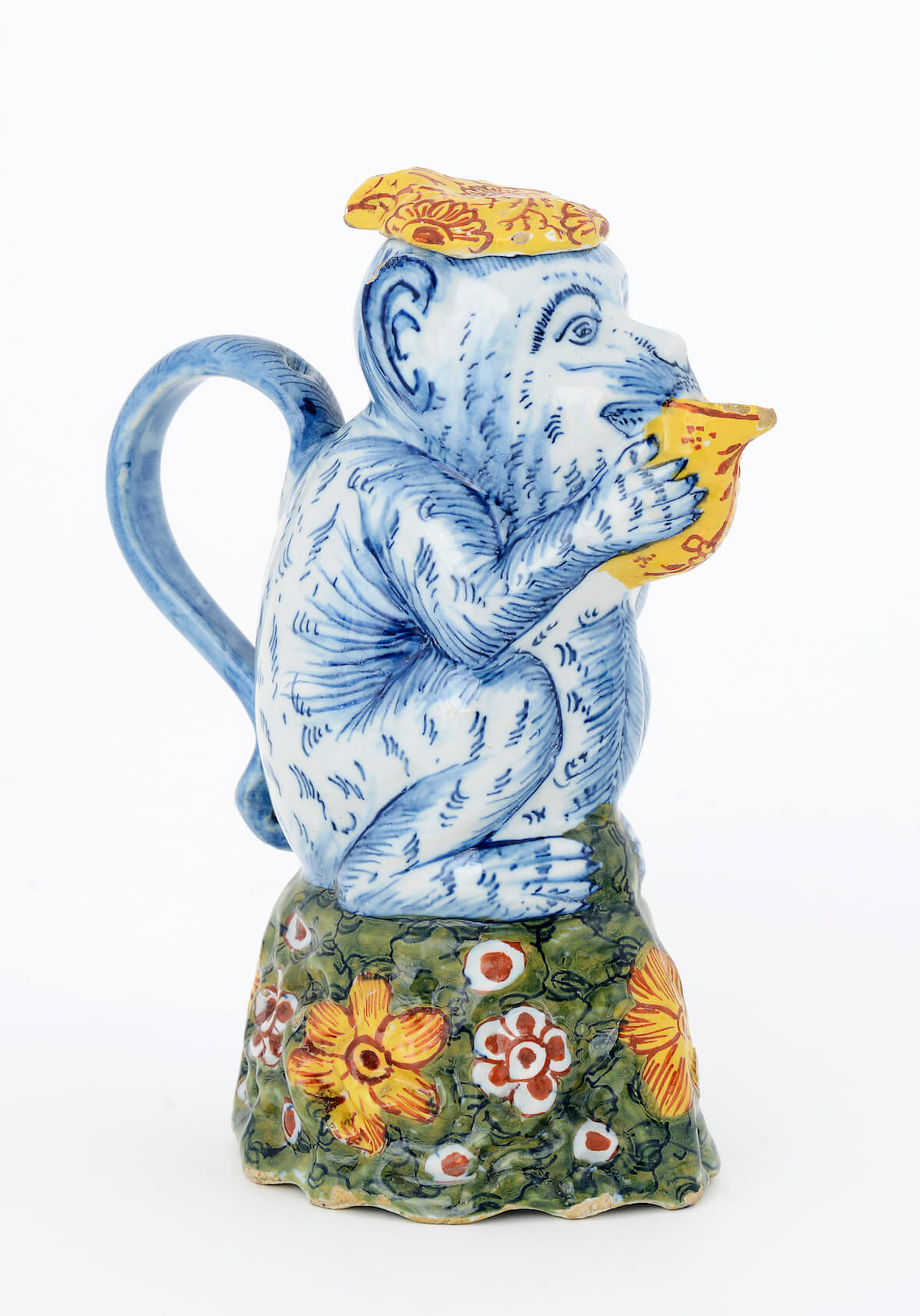 The more familiar imagery of monkeys Delftware we find in the so-called monkey jugs: jugs used for milk in the shape of a monkey, that is often wearing a hat and has an inscription on his belly. This polychrome example, made around 1755 in the city of Delft, is wearing a yellow cap decorated with iron-red blossoms and tendrils. Jugs of this imaginative model were adapted from Chinese Kangxi period (1662-1772) enameled biscuit wine ewers formed as a seated monkey holding an open-topped peach to his mouth. In China, the monkey played an important role in the Chinese mythology. The monkey Sun Wukong gained immortality by cunning, but was expelled to earth by Buddha to learn humility. The Delft potters adapted the shape a little, turning it into a highly popular figure. It was made in a wide variety of colors, the monkey wearing different hats, and carrying different verses on its bellies. Although not as much as in Holland, ewers of this model enjoyed also popularity in other countries. In the Meissen factory in Saxony, property of the Elector of Saxony and King of Poland August the Strong (1670-1733), teapots shaped as monkeys and squirrels were created of porcelain around 1735. Also in England, factories as Staffordshire produced monkey-shaped teapots from salt-glazed stoneware.