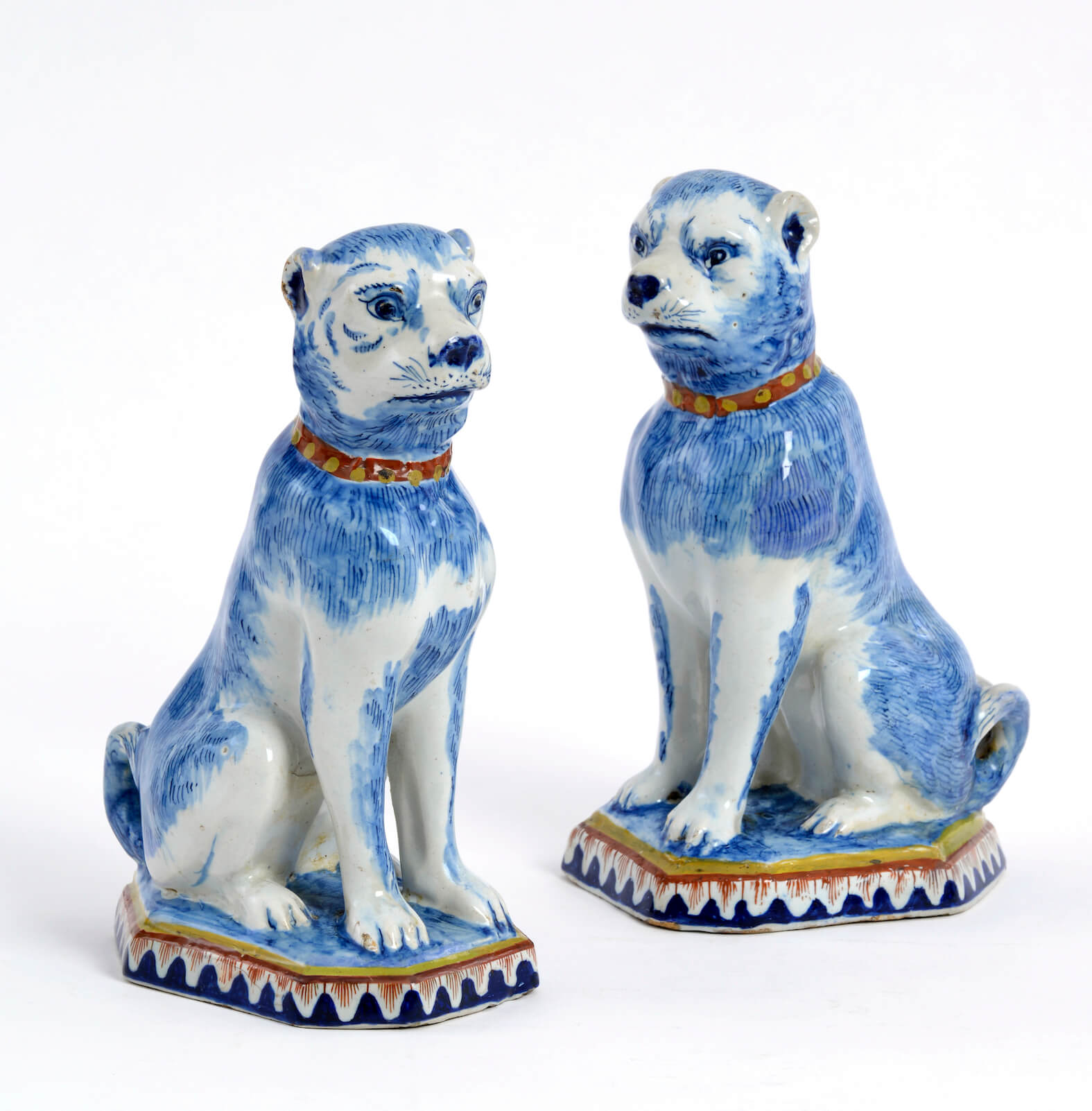 Dogs have been beloved human companions for thousands of years. In ancient Egypt, dogs were used for hunting, and they were domesticated over 10,000 years ago in the Far East. In the early modern period dogs assisted during the hunt, pulled carts, and were also kept as companions. Many contemporary paintings also show that several royal and noble families kept dogs as pets. For example, the pug, which is related to Far Eastern mastiffs, was introduced in Europe by the Dutch in the sixteenth century. Popularized by the House of Orange-Nassau, pugs quickly became the companion of kings and aristocracy.[1] Therefore it is not surprising that the beloved animal also appears in and on Dutch Delftware. 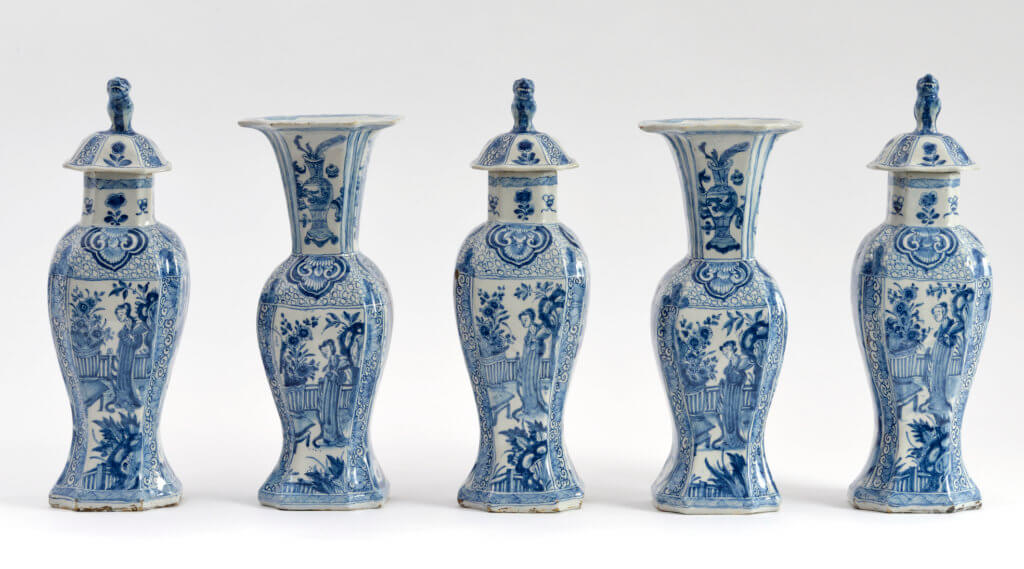 Initially inspired by the Chinese porcelain wares that were brought to the Netherlands by the Dutch East India Company (VOC) in the beginning of the seventeenth century, the Dutch modelers and painters often incorporated exotic features in their earthenware objects. The ‘Foo-Dog’ is one exotic subject that was used by the Dutch in both the paintwork and the modeled knops. The term ‘Foo-Dog’ is not the Western name for a Chinese dog, but for the Chinese guardian lions or Imperial guardian lions that were believed to protect against evil. These Buddhist lions are a common motif on Chinese porcelain. Even today, lion pairs are often placed at the entrances to temples, government offices and restaurants in China. The term “Foo” may be a transliteration to the Chinese characters that mean “Buddha” or “prosperity,” respectively. However, Chinese reference to the guardian lions are seldom prefixed with these characters, and more importantly never referred to as “dogs.”

Further, the Chinese porcelain factories in the eighteenth century changed the way they portrayed lions, from a sharp-clawed savage feline to a friendlier-looking beast. To the Dutch, these Chinese lions looked like the dogs they kept as pets.[2] The Delftware painters often made them look even more familiar and unthreatening by giving them wild manes and human facial features. As in Chinese porcelain, the covers of Delftware vases are also sometimes surmounted with a knop in the shape of the Foo-Dog, as this blue and white garniture from circa 1720 shows. The five-piece garniture is marked IKW probably for Willem Jacobusz van der Kool, who was the owner of De Drie Porceleyne Flessies (The Three Porcelain Bottles) factory from 1700 to 1716, or his wife Anna Maria van der Kool-Schrevelius, who operated the factory subsequently until 1745. The vases are decorated in a chinoiserie style, with a Long Eliza holding a fan and standing in a fenced garden and the sides with Oriental figures in a landscape with a pagoda in the background. 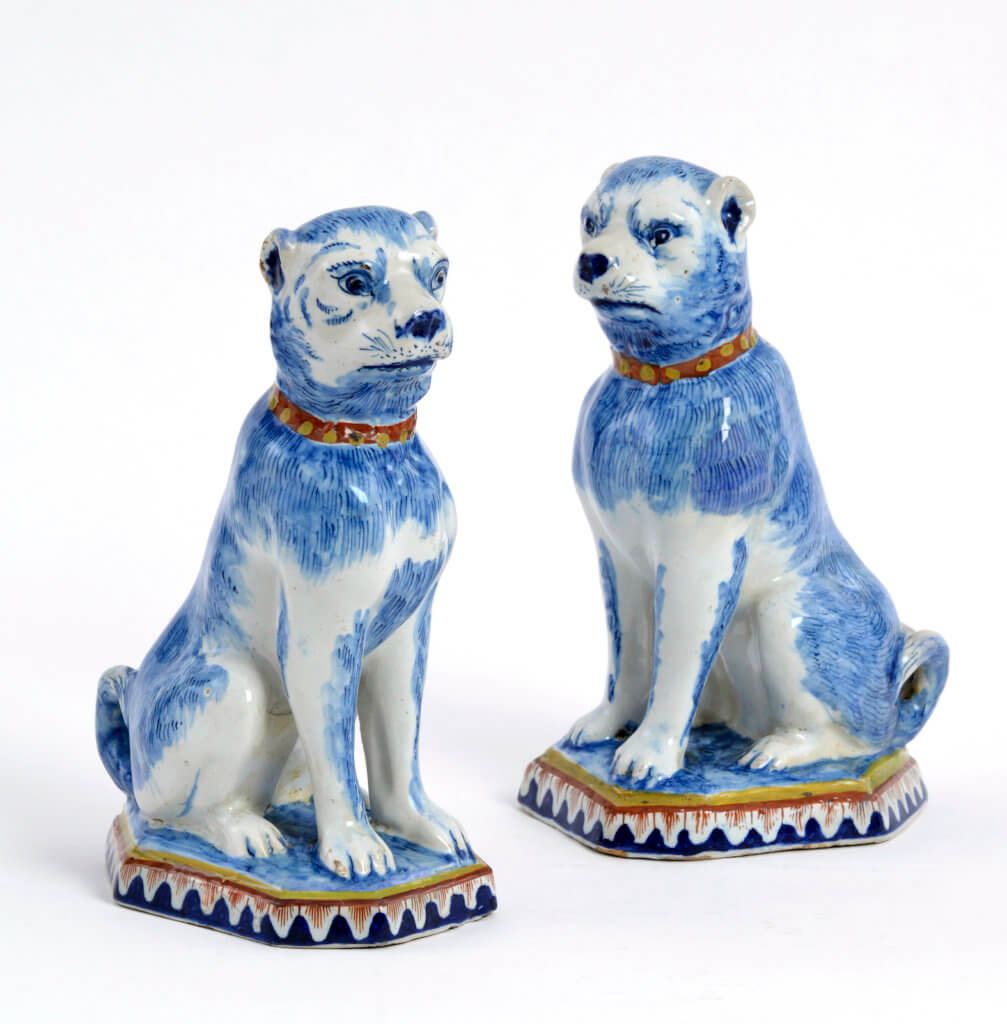 Dogs were also modeled as independent figures, such as this pair of polychrome seated dogs, from circa 1770. Figures of dogs were produced in Delft from the early eighteenth century, with exceptional pieces by De Metaale Pot (The Metal Pot) factory, under the leadership of Lambertus van Eenhoorn from 1691 to 1721. A model quite similar to this pair was produced in both blue and white, and monochrome white versions to accommodate its popularity among all sectors of the Delft market. These purely ornamental objects were placed on the mantelpiece, etageres, or inside the ‘porcelain’ cabinet. A 1779 inventory made after the death of a former Delftware factory owner mentions figures of dogs found on the dining room mantelpiece, and several more figures in the kitchen along with the more typical Delft plates and dishes.[3] 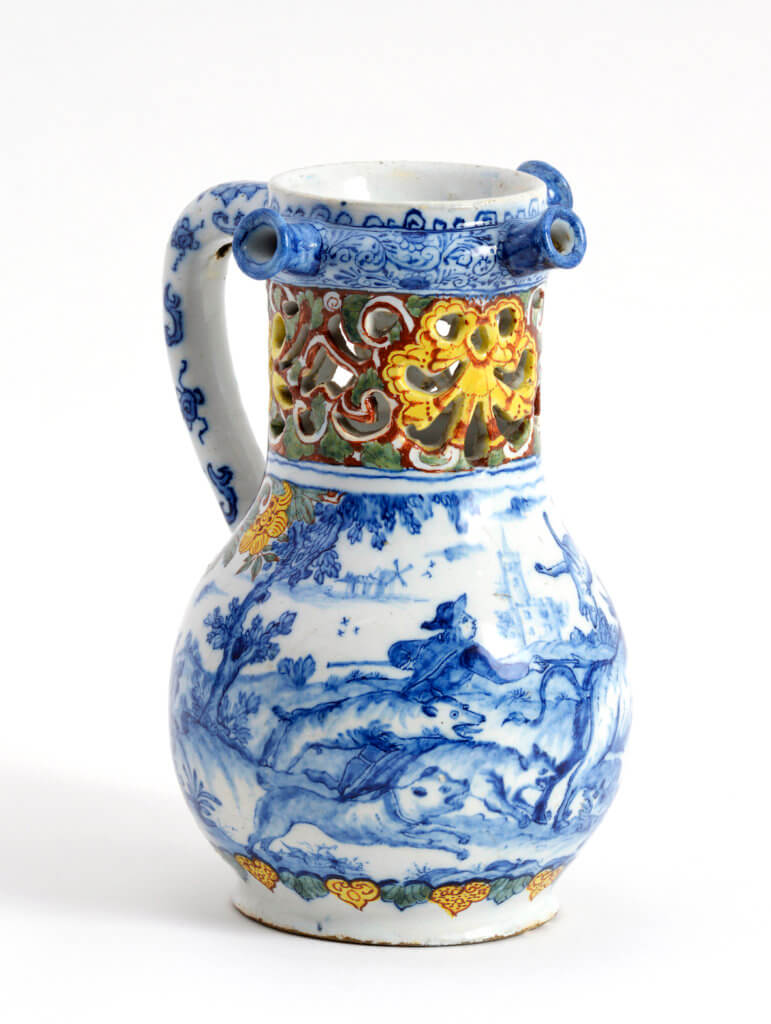 While it is possible that these figures were modeled from life or from Dutch penny prints, it is more likely that their image was taken from a Chinese porcelain original. Towards the end of the eighteenth century, there was a new interest in small Delftware figures modeled from Chinese porcelain and ivory figures.[4] Although many Delftware chinoiserie objects were modeled after blanc de chine figures from Dehua, figures of dogs were possibly inspired by Kangxi (1662- 1722) examples in polychrome enameled biscuit porcelain produced in Jingdezhen. Starting in the early eighteenth century, there were numerous Chinese models of dogs, a trend that may have been started by European models sent for copying.[5] Perhaps the Delftware dogs inspired the Chinese craftsmen who already made porcelain ones to create other models, which were then emulated by Delft potters.

Although Chinese porcelain initially inspired Delftware painters, they later used more Western imageries, such as prints in the eighteenth century. Made around 1750 in the city of Delft, the decoration on this puzzle jug is likely taken from a print although its source is unknown. The jug depicts the violent game of bull-baiting, in which dogs are pit against bulls. The dogs were trained to target the bull’s snouts, the most sensitive part of the animal. When the dogs grabbed the nose, the bulls would violently shake and sometimes throw the dog into the air as the bulls tried free themselves. The event was seen as a real entertainment and attracted crowds. 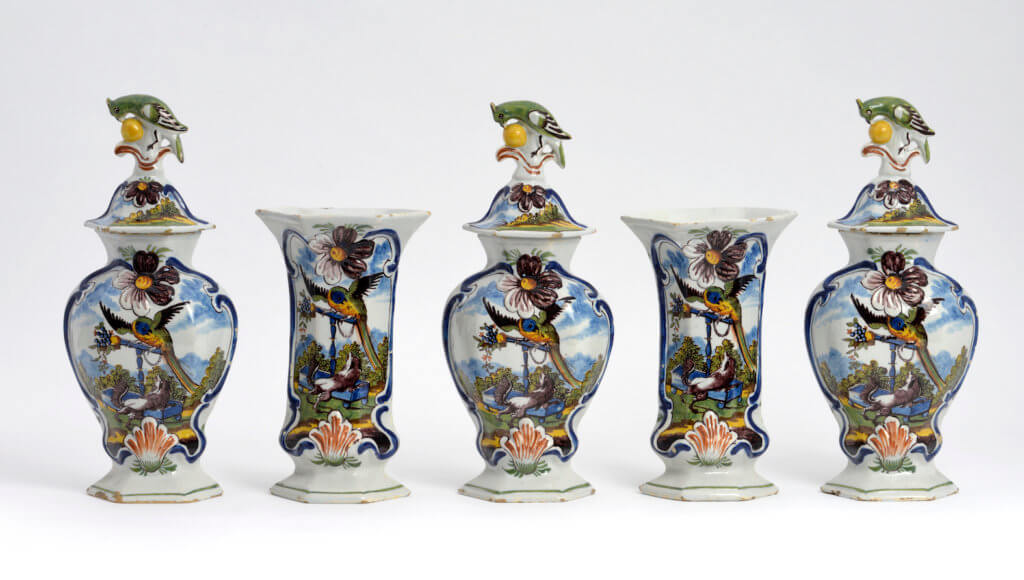 A print also forms the decorative scheme for this polychrome garniture showing a spaniel and a parrot, marked for Lambertus Sanderus, the owner of De Klaauw (The Claw) factory from 1763 to 1806. In 1734 Cornelis Pronk (1691–1759), son of an Amsterdam merchant, and himself a painter and porcelain designer, received a commission by the Dutch East India Company (VOC) for designs for a set of plates to be produced in China. Unfortunately, the production and shipping from China was too costly, and the VOC ended its collaboration with Pronk in 1740. Two designs can be directly linked and two are attributed to Pronk. Other designs, however, have the distinctive style of known Pronk pieces which probably originated from the same workshops. This “parrot and spaniel” design is closely associated with Pronk.[6] Although this design is sometimes seen on Meissen porcelain, it rarely appears on Chinese porcelain and is even more uncommonly found on Delftware. 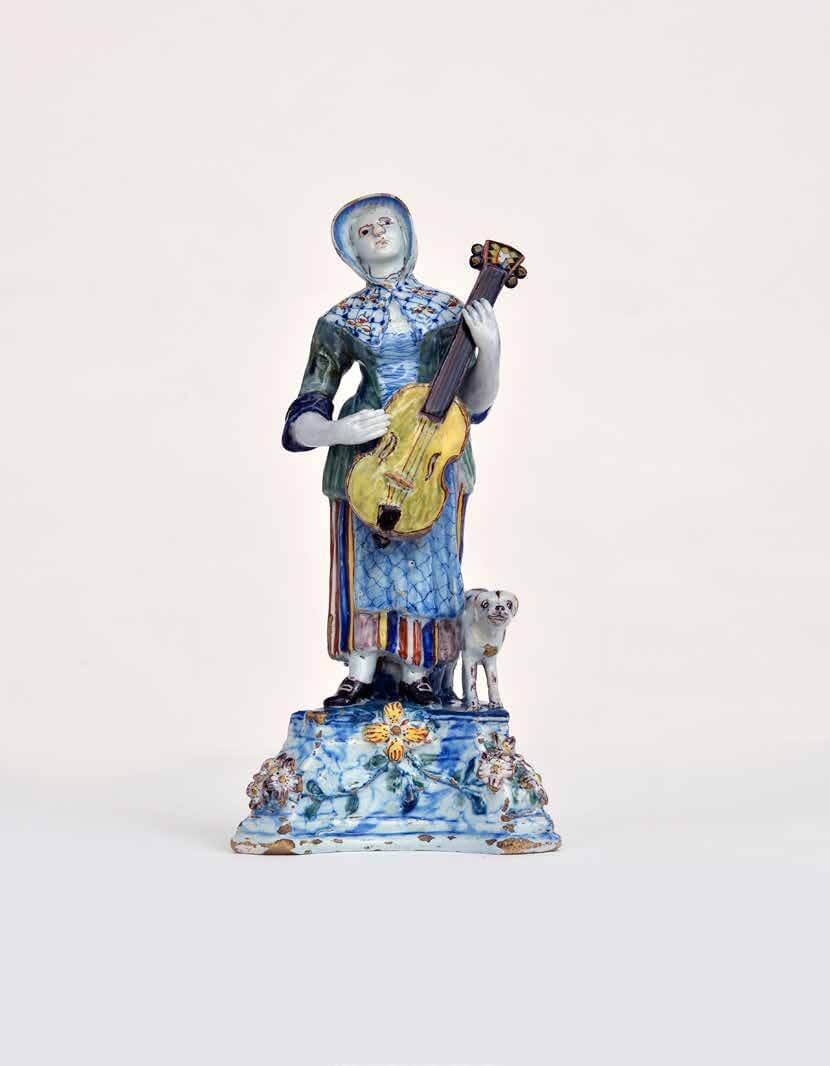 The Delft potters also used their own imagination to model figural dog groups, for example this polychrome figural group of a lady playing a stringed instrument, from 1770. The lady, standing on a marbleized triangular base, is accompanied by a small dog with manganese markings. Although the object is marked for Anthony Pennis, the owner of De Twee Scheepjes (The Two Ships) factory from 1750 to 1770 -or his widow Pennis-Overgaauw, the owner of the factory from 1770 to 1782-, this figure is from a series of four musicians generally marked for De Porceleyne Schotel (The Porcelain Dish) factory. The musicians include a lady playing the viola da gamba, a lady lutanist (both ladies known with and without a dog at their feet), a male violinist and a male a flutist. Another group shows a lady holding a dog, from circa 1765. The static “puppet-like” stance of the model and the position of her arms are reminiscent of the eighteenth century dolls with limbs generally made of cloth, leather, papier-mâché or wood.

Although the production of Delftware ornamental figures originated under the influence of Eastern porcelain, this production was given a new impetus in the 1730s by all other kinds of figures, such as foxes, goats and dogs from the porcelain factory of Meissen. In the forties, the Höchst faience factory brought a series of pugs on the market that were usually displayed in a sitting position with a front leg lifted. Also in Delftware there was a large variety of figures of dogs. From simple and sometimes clumsily modeled dogs to naturalistic and often colorfully decorated, the Delft potters implemented countless different ornamental figures of dogs.[7]

[1]  The breed is indeed inextricably linked to the Royal Dutch family. Legend has it that William the Silent, Prince of Orange was saved by his pug (the so-called Pompey), who by his barking foiled an assassination attempt against his master. The pug became the official dog of the House of Orange-Nassau. Later, in 1689, when William III was named King of England, several pugs accompanied the Royal couple and attended the ceremony.

[5] D. Howard and J. Ayers, China for the West, Chinese Export Porcelain and Other Decorative Arts for Export illustrated from the Mottahedeh Collection, 1978, p. 596.