For centuries, fans have been used for both utilitarian and ceremonial functions. The fan originated in Asia, and was first used for cooling more than 2,000 years ago during the Zhou Dynasty. The exotic objects were brought to Europe by trade travelers in the sixteenth century. Fans were also seen in the decoration on Chinese porcelain that arrived in the Netherlands and became one of the characteristic exotic motifs that found its way to Delftware. 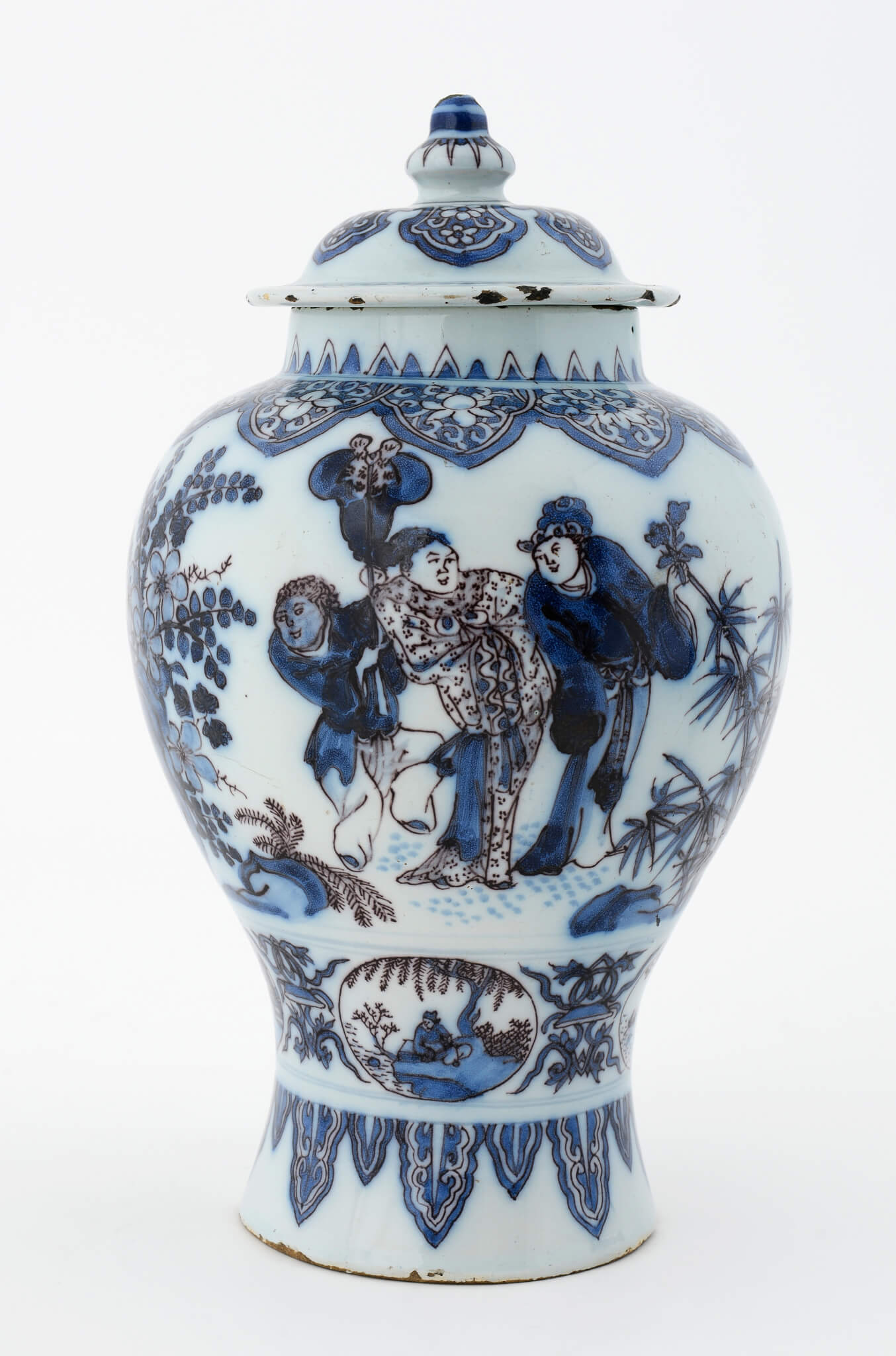 China has one of the longest historical records of continuous fan production in the world, where fans are used by both men and women. The earliest written record of a fan in China is in AD 121 where reference was made to a large leafed plant that was used as a fan. Another early type of fan was the feather fan, which was made from a variety of bird feathers. Goose feathers were the most common type used, while feathers from pheasants, peacocks, cranes, falcons and hawks were considered more noble choices. Introduced around 265 AD, long animal hair from the tails of deer and horses were used to construct fan-shaped dusters. This type of fan was traditionally used by men of distinction as a status symbol. Members of the ruling class were often represented with fan shaped dusters in their hands.

There are many varieties of fans, from a door panel that hung from the ceiling and was pulled back and forth by means of strings to it, to long-handled fans to the fan-shaped dusters. The use of large and long handled fans, which were generally held in pairs in imperial processions, is recorded from the eleventh century BC. These Staff or Screen fans were generally made of feathers or other luxurious materials. Together with banners and other insignias, they were part of the decorative ceremonial equipment of the royal retinue. 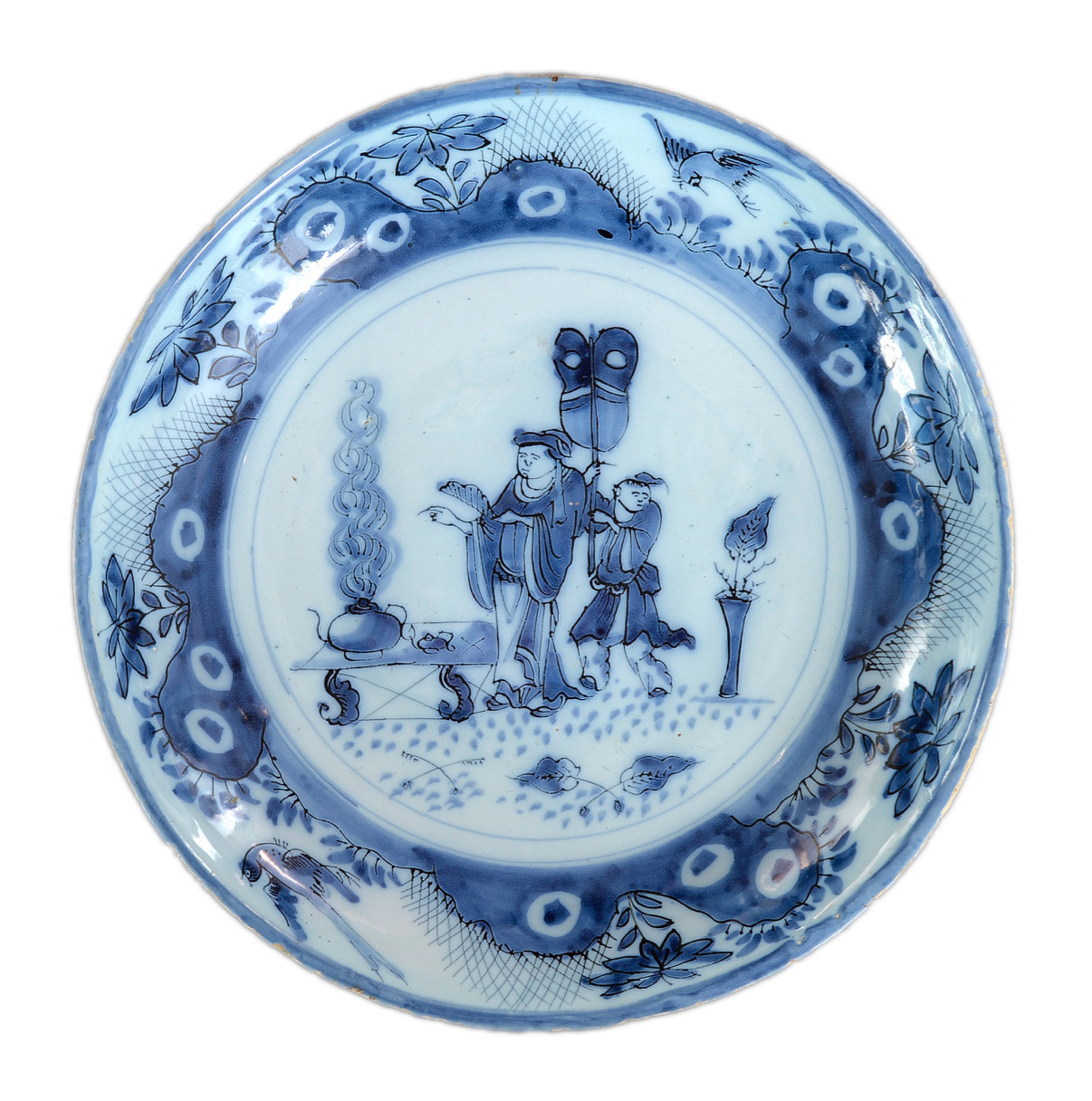 Long-handled fans are often depicted in the decoration on chinoiserie style Delftware, for example, on this blue and manganese baluster-form vase from circa 1680. The vase illustrated above, which is marked for Samuel van Eenhoorn, the owner of De Grieksche A (The Greek A) from 1678 to 1685, is painted with a typical chinoiserie transitional decoration of a landscape scene with prunus growing from a rock, bamboo and other shrubbery. On the front it shows two chinoiserie figures strolling before their servant carrying a long-handled fan. A similar fan is shown on this blue and white charger from circa 1685, where an attendant is holding the large fan. The attendant is standing behind a Chinese man, possibly a dignitary or nobleman, who gestures to the low table with a steaming large teapot and a smaller teapot. The charger depicts the preparation of tea using two different sizes of teapots. The large teapot functioned as a kettle to heat the water. The water was then poured into the smaller teapot that contained tea leaves.

Close observation of the charger reveals a hand fan in the left hand of the dignitary. Although it resembles an early stiff feather fan, it is most likely a foldable fan. Traditionally, the folding fan was a Japanese invention that was introduced into China during the Sung dynasty (960-1279 AD). This type of folding fan was made from slips of Juniper wood, joined together at the top with a thread and tied at the other end so that they opened in a radiating fashion. Folding fans were rare, yet they were in fact used by the upper class of the Sung dynasty. The emperors’ use of the folding fan helped to elevate its status.

The “round fan” was another type of fan that gained prominence during the late Sung dynasty. These silk fans shaped as the moon became a favorite of young ladies, especially those in the imperial palace. The moon-shaped fan later took on other shapes, such as oval, flat and round, or sometimes the shape of a Chinese plum flower or sunflower. Usually, ribs of the fan were made of animal bones, wood or bamboo, while the handle was engraved with beautiful designs and decorated with jade pendants. Beautiful scenes of mountains and water or flowers were also embroidered on the face of a moon-shaped fan. This blue and white fan-shaped Rijsttafel dish from circa 1680 and also marked for Samuel van Eenhoorn, shows a Chinese man bearing a screen fan and approaching a lady holding a fan. 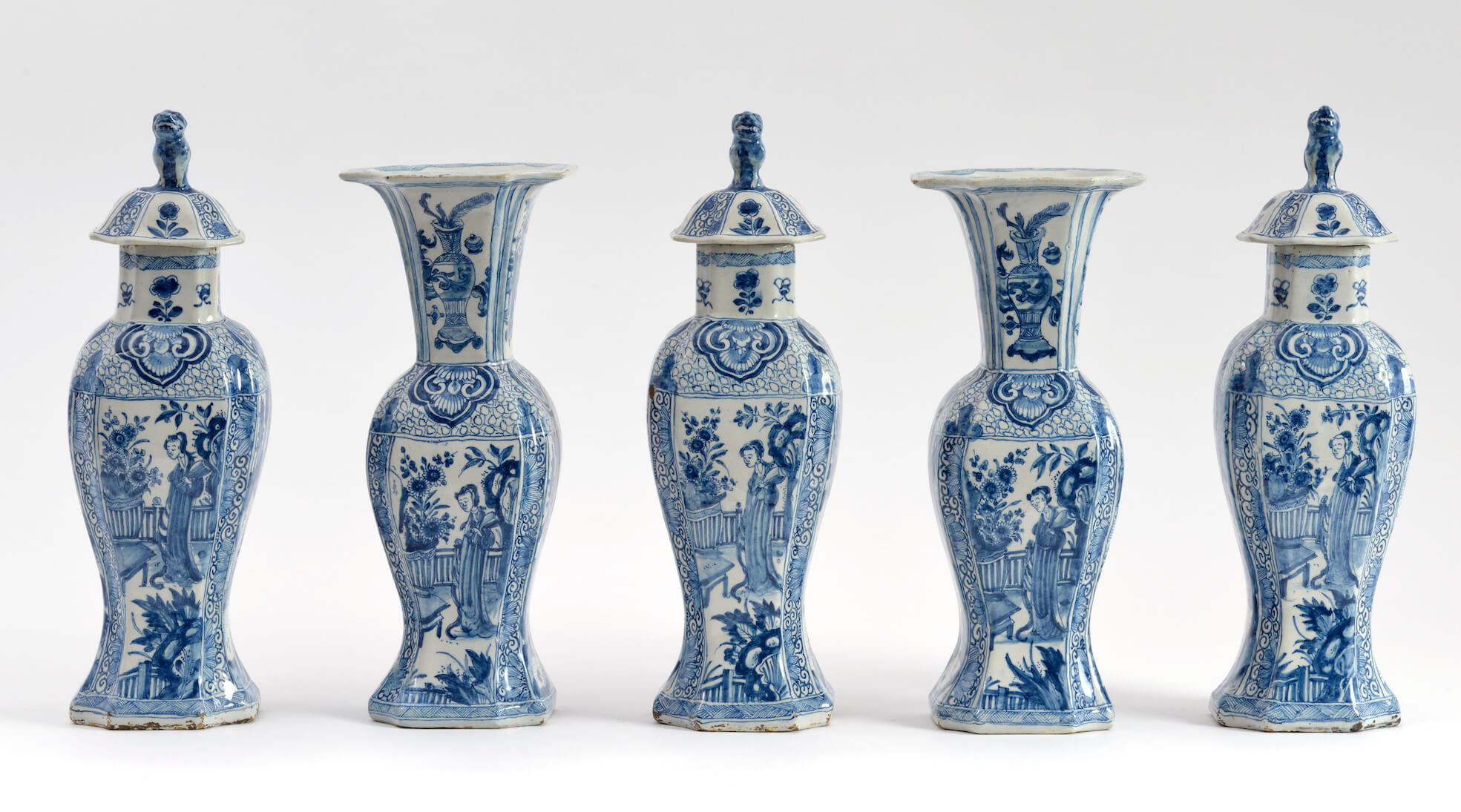 Also, the slightly later blue and white garniture, from circa 1720 and marked for Willem Jacobusz van der Kool, the owner of De 3 Porceleyne Flessen (The Three Porcelain Bottles) factory from 1700 to 1716, or his wife Anna Maria Van der Kool-Schrevelius, who operated the factory subsequently until 1745, shows a Long Eliza holding a fan.

The portability and ease of fans made them fashionable objects. In the Netherlands, the fan became a luxurious and indispensable accessory for women.