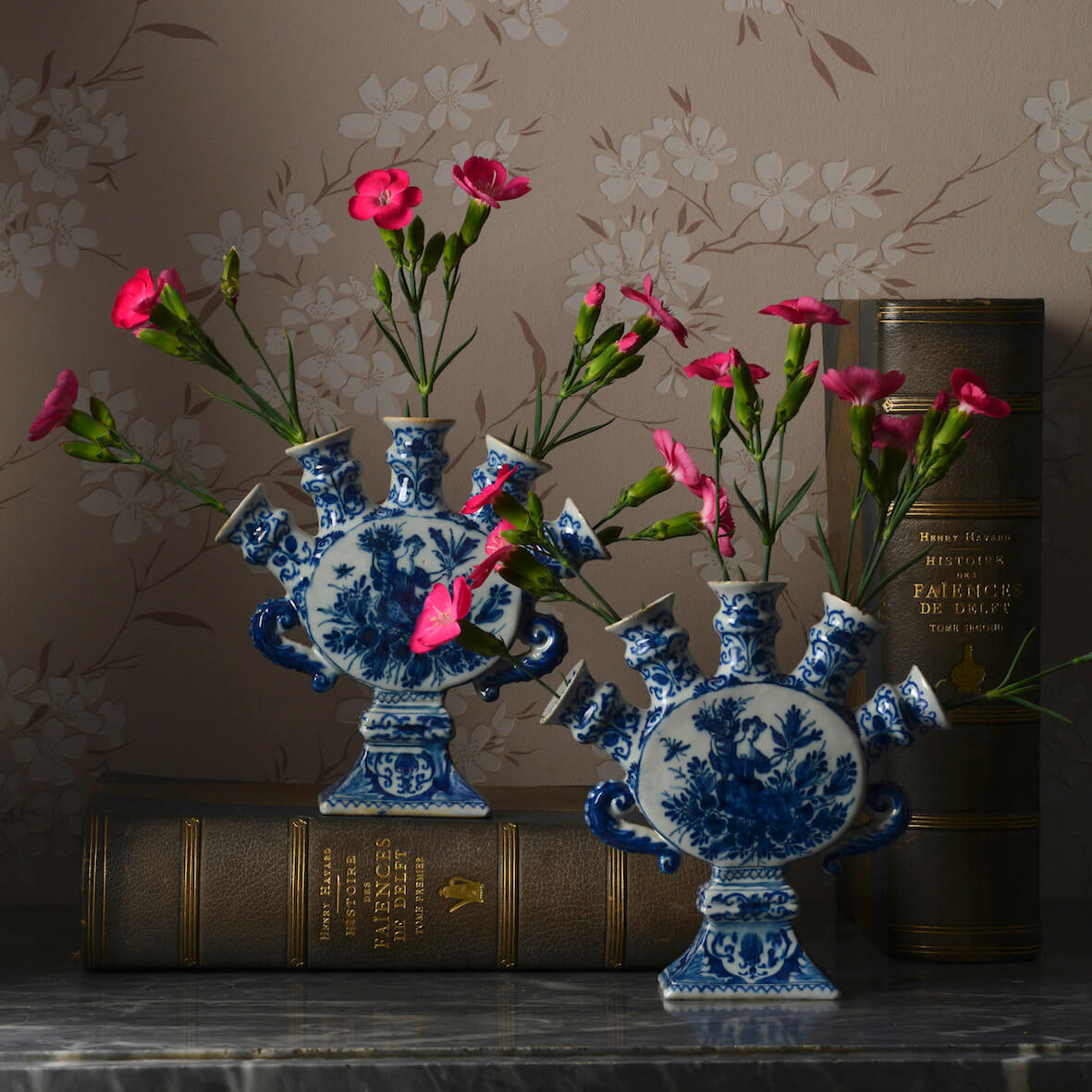 The Dutch East India Company rarely encountered problems trading Chinese porcelain until circa 1645, when civil unrest in China increasingly hampered the VOC’s business. The production of porcelain was almost stagnated in Jingdezhen, supply routes were severed, and the VOC lost Formosa as a trading base in 1661. Since the Dutch East India Company had great difficulties in meeting their client’s demands, they started looking for a substitute in Japan. The downturned trade lasted until 1683, when the authority of the Qing Dynasty was established throughout China with the capture of Formosa.

Trade from South-China resumed and porcelain from Jingdezhen could now be obtained in abundance and at lower costs.[1] The popularity of these wares is underscored by the vibrant private trade of porcelain. This private trade was so successful that the VOC could not compete. Individual merchants were more adept at identifying shifting fashions and new shapes and decorations, making handsome profits at auctions. Not only quality, quantity and purchase price could be stipulated, but also special objects could be ordered: Chine de commande.

Chinese porcelain makers satisfied the European demand for familiar, utilitarian forms with porcelain wares that included many of the Western shapes. Although these objects were not customary in China, the Western orders posed no problems for the Chinese potter as models were sent to the Chinese potteries to be copied.[2] A model could be made from European ceramic, metal or glass. The use of European models is proven by existing VOC documents relating to the porcelain trade, and from the porcelain that has survived from that period. There was a greater range of forms than were made in Kraak-porcelain, including tankards, jugs, mustard pots, salts, tazze, chamber pots, shaving bowls and candleholders, all of which were copied directly from European models.[3] Even more intriguing objects include a sugar caster and a coffeepot made of Chinese porcelain in the collection of the Groninger Museum in Groningen (inv. no. MB 358) and Museum Boijmans-Van Beuningen in Rotterdam (inv. no. A 2276). Objects for the coffee table were characteristic for the West and unknown in China. The sugar caster and coffeepot are probably derived from Dutch silver examples, although a Dutch Delft example after a silver model could also have functioned as the basis for these objects.

Some Chinese porcelain objects are more obviously related to Dutch utensils, including the so-called ‘herring dish’. In Delftware, several types of herring dishes were made around 1770 for displaying raw herring, which is a typical Dutch delicacy. A Chinese porcelain example, from circa 1775, can be found in the collection of the Gemeentemuseum in Arnhem (inv. no. GM 8241). Made for the export market, this dish is based on a Dutch Delft example. These herring dishes were sometimes mentioned in the trading documents of the VOC. In 1753, 158 pieces were bought and in 1773, 223 “narrow dishes with one herring painted on them” were acquired for 42 cents per piece and 216 “wider ones with two herrings” for 52 cents per piece.

Another typical Western object is the puzzle jug. Puzzle jugs were intended as an amusing tavern game or a conversation piece during a dinner party, as drinkers attempted to consume the contents without causing a spill. By the second half of the seventeenth century, puzzle jugs developed a certain popularity and production increased. Although existing models from other countries are very uncommon, Dutch puzzle jugs are even more rare. Delft examples can be found dating from the 1650s through the eighteenth century. At the height of their popularity, Chinese potters from the Kangxi period (1662 – 1722) were inspired to produce export blue and white porcelain puzzle jugs. These examples were clearly special commissions that were intended for Dutch clients. A Chinese porcelain example, from the early eighteenth century, is in the Museum Het Princessehof in Leeuwarden (inv. no. NO 590).

During the Kangxi period, Chine de Commande objects were mostly decorated in the typical underglaze blue. However, after 1740 many objects were decorated with emaille colors, which could be manufactured in separate workshops in Canton instead of Jingdezhen. The decorations that adorned these Chinese export objects were both European and Chinese in style, showing both Dutch landscapes, mythological scenes, or European figural groups, as well as Chinese men or Long Eliza’s on terraces or pavilions in a garden setting.

The Chinese potters and painters even copied the Delft factory marks on the Chine de commande objects. A tazza or cake stand, made in China around 1700, in the collection of the Jan Menze van Diepen Stichting (inv. no. JMD-P-1264) is marked AK in blue on the bottom. From this mark, which was used on Delftware by Adrianus Kocx, the owner of De Grieksche A (The Greek A) factory from 1686 to 1701, it becomes clear that the Chinese potters faithfully copied an original Delft piece. The decoration on the Delft piece was itself strongly influenced by Kangxi porcelain, but the form is wholly Dutch.[4] The AK mark can also been found on blue and white porcelain bottles and even on flower vases.

Flower vases with numerous spouts were most commonly made in Delft for Dutch royalty and the aristocratic clientele in both Holland and Great Britain. Around 1700, there were over thirty potteries in operation in Delft, of which at least ve produced vases with holes and spouts as their maker’s marks indicate. Among them, De Grieksche A factory had been producing flower vases as early as circa 1680. These early examples were more modest in size than those made for King William III and Queen Mary a decade later. De Grieksche A, together with De Metaale Pot (The Metal Pot) factory, created the largest output of flower vases; over a period of sixty years, from 1680 to 1740, they sold a multitude of different types of vases with spouts and holes.[5] There was a wide variation in the shapes of the vases with spouts produced by the Delft potteries, from bowl-shaped to fan-shaped ower vases and the multi-tiered flower pyramids.

Although they are rare, there are several ower pyramids that were copied by Chinese potters and even bear the AK mark. An AK marked example, made at the end of the seventeenth century in China, is in the collection of the Groninger Museum in Groningen (inv. no. MB 149) and an unmarked example in the collection of the Victoria & Albert Museum, London (inv. no. FE3&A-1979). These ower vases preeminently show the interactions between the West and the Orient. The shape of the pyramid or obelisk is European in origin and traditionally symbolized power and the fame and glory of a monarch. Further, the decoration is often in a Western style typical for the Delft ower vases with mythological gures as cupids and Flora amidst a profusion of owers. However, the Oriental in uences are undeniably evident. It is sometimes suggested that the famous ‘Porcelain Tower of Paolinxi’ in the Chinese city of Nanking, a nine-story pagoda made entirely of porcelain with bells suspended from decorative projections at the corners of the roof of each story, has served as the inspiration for the flower vases.[6] Not only its tall tapering shape, but also the roof projections, which can be seen to correspond with the spouts on each corner of the tiers of the flower vases are strikingly similar. And finally, the strongest similarity is the use of the material: the genuine porcelain in China and ‘Hollandts porceleyn’ in Delft. Although the heyday of the Delft flower vases appears to have been the brief period between 1680 and 1750,[7] the imitations in Chinese porcelain cover a larger period and were produced even long after the Delft examples. These flower vases especially demonstrate the result of two traditions.

[3]  On rare occasions, the Chinese painter was supplied with a drawing made especially for the purpose. Jörg 2011, p. 40.