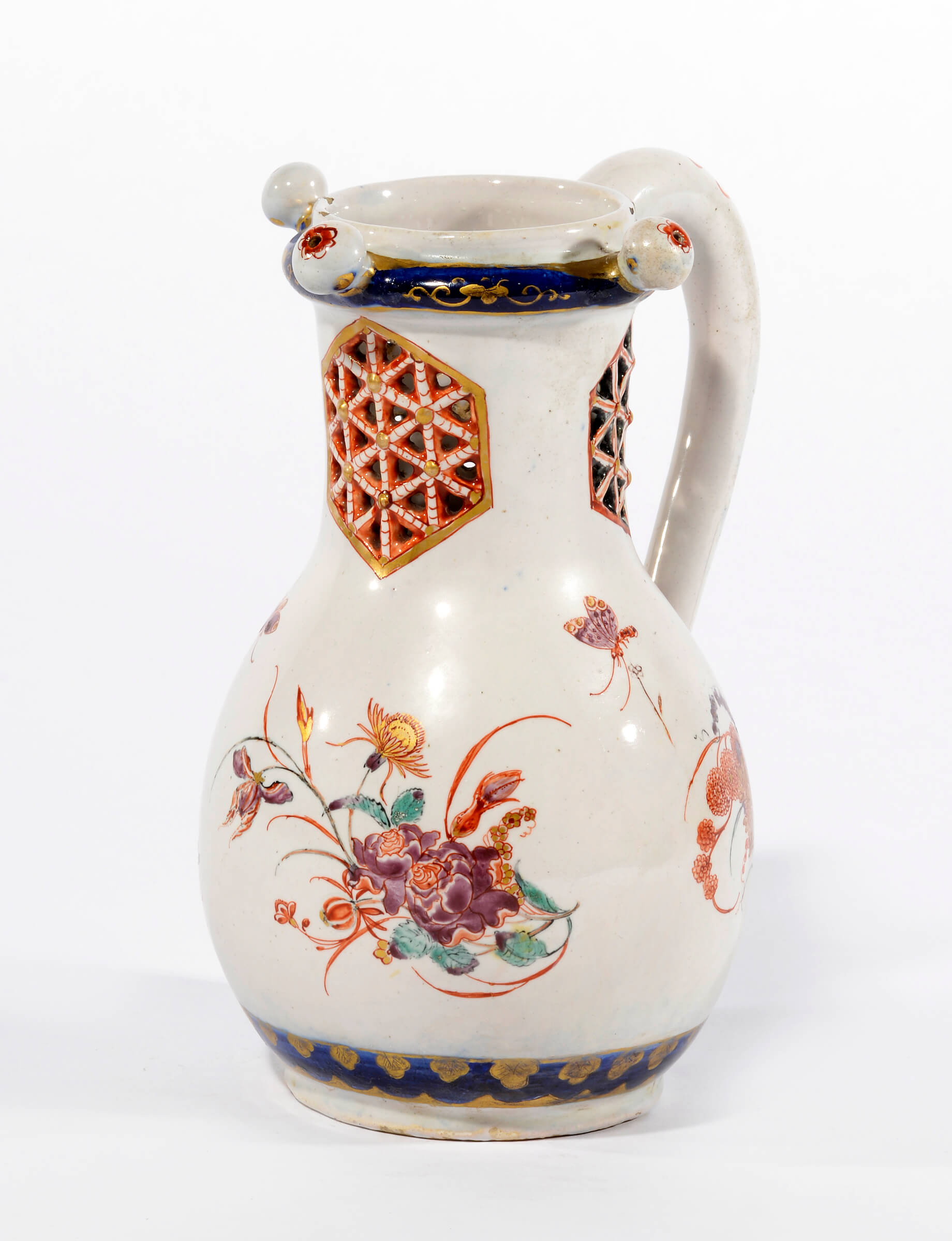 The puzzle jug is one of the oldest jokes in the Delft potters’ continually playful repertoire. Puzzle jugs were intended as an amusing tavern game or a conversation piece during a dinner party. One can only imagine the popularity of these objects in homes and taverns as drinkers attempted to consume the contents without causing a spill. After a long and alcohol-induced evening, it became an increasing challenge. The pierced openwork on the neck of the jug intentionally prevented any liquid in the body from being poured or consumed, and provided rounds of hilarity when the uninitiated attempted to drink from the vessel. Additional holes that were cleverly concealed made the challenge even more confounding. 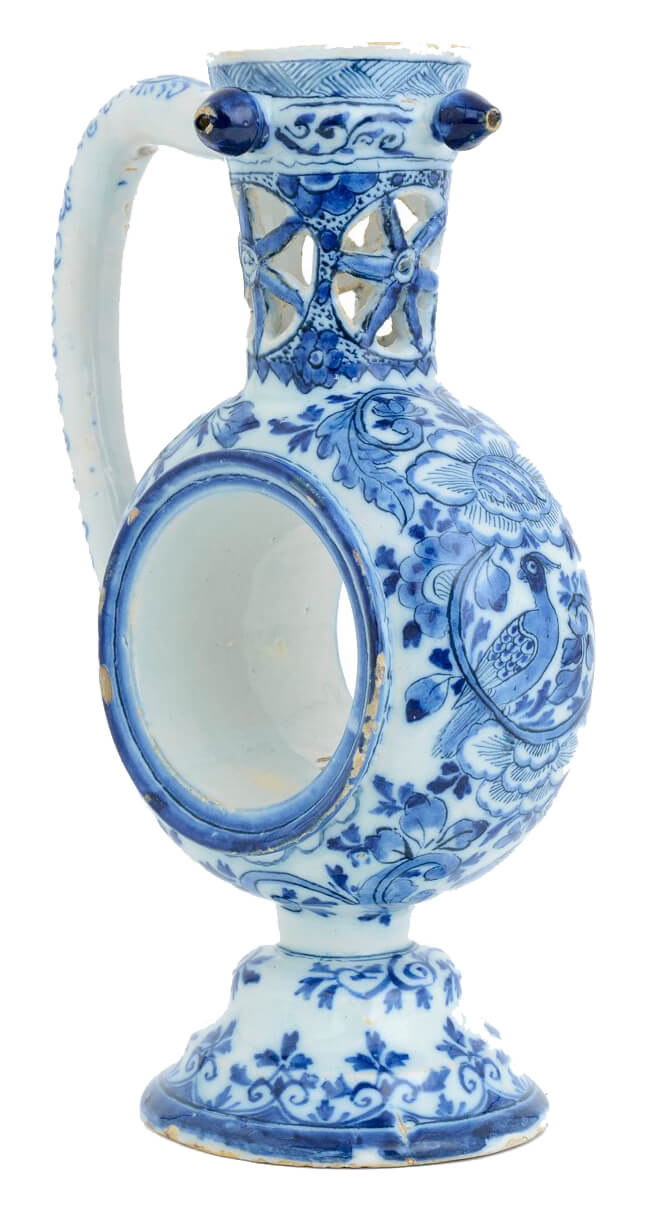 The earliest known example of this complicated “trick” vessel is the Exeter Puzzle Jug, produced in Saintonge in Western France around 1300, but discovered during an excavation at Exeter in Devon, England, in 1899. The vessel is now in the Royal Albert Memorial Museum in Exeter.[1] Over the ensuing centuries, puzzle jugs have appeared in Italian, German, French and English ceramics and occasionally in other mediums. By the second half of the 17th century, puzzle jugs developed a certain popularity and production increased. Although models from other countries are very uncommon, Dutch puzzle jugs are particularly rare. Delft examples can be found dating from the 1650s onward through the eighteenth century. At the height of their popularity, Chinese potters from the Kangxi period (1662 – 1722) were inspired to produce export blue and white porcelain puzzle jugs. These examples were clearly special commissions that were intended for Dutch clients.

Inventory lists from factories and potters’ shops occasionally mention a suijgkan (suction-jug), a term that referred to these vessels.[2] The name suijgkan hints at the solution to the puzzle, since it was not the intention to pour or drink from it like a normal jug or tankard, as the pierced openwork on the neck of the jug makes clear. Puzzle jugs were also made in various forms other than the pierced neck examples. This spectacular blue and white vessel from circa 1730 is formed as a ring. Painted on the front and reverse of the unusual circular body is a Chinese pheasant perched on a C-scroll. Its tail forms the stem of a flowering, leafy peony branch. The vessel’s slightly flaring neck is decorated with a dotted ground, blossoms and pierced with three roundels. This unusual ring shape was first introduced by the Westerwald factories of Germany during the third quarter of the seventeenth century. Delft potters took the existing object as a model, and added the pierced neck in order to transform its function as a puzzle jug.[3]

Puzzle jugs were most likely made on special order as they were difficult to produce and remaining examples are often dated.[4] This blue and white puzzle jug was made in Delft or Rotterdam and is dated 1734. Interestingly, the date is not painted on the vessel, but the numbers are incorporated into the openwork decoration of the blue-sponged neck of the jug. The spherical body of the jug is painted with a trellis-diaper-ground. Three large panels within the body depict a Chinese man running across a bridge toward a pagoda, a bird perched on flowering branches, and a flowering plant. Alternating between these large panels are three smaller quatrefoil panels, one painted with a bird perched on a flowering plant and the remaining with stylized flowers. The shape of this piece is also derived from the Westerwald stoneware jugs that became very popular in Holland during the second half of the seventeenth century.[5]

Although puzzle jugs were already technically challenging to produce, this polychrome and gilded petit feu example was even more difficult due to its complex firing process. Made around 1730 in the city of Delft, the pear-shaped body is beautifully decorated with three winged insects and a snail between three clusters of iron-red, manganese, green and gold flowers. A blue border near the base of the vessel is further embellished with gilt leaves. Three hexagonal panels of iron-red and gold trelliswork are pierced into the cylindrical neck. Mimicking the base, a blue ground rim is also decorated with four gilt scroll devices. The jug was fired in the mixed-technique, a process that requires three to four separate firings. The first firing produced the biscuit-object after which a layer of glaze was applied. The grand feu colors were then applied to the glaze and fired at approximately 1200ºC. After that firing, further colors were applied for the petit feu firing at approximately 800ºC. If the vessel were gilded, a fourth and final firing occurred.

Now, finally, let’s reveal the secret of the puzzle jug which lies in the construction of the vessel. Generally, the hollow tubular rim has one functioning nozzle, and two or more “dummy” nozzles. These false spouts are connected to the hollow handle, which forms a siphon from the lower body. The suction, however, is broken by a small hole beneath the top of the handle. To successfully drink without spilling, the drinker must place his thumb over the hole in order to create a vacuum that allows him to suck the liquid from the jug up through the handle, around the rim and out through the one functioning nozzle. The unwitting guest who attempted to drink from it without covering the holes would find himself drenched.