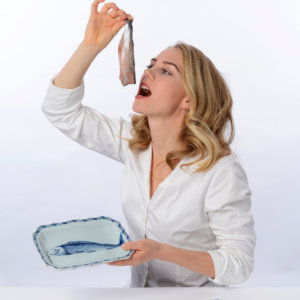 What is depicted here is the way the Dutch traditionally eat herring. Holding on to its tail and eating it in a few bites. Usually this dish is served with chopped pieces of raw onion and sometimes pickles. Most people go for a round of haringhappen at a local stall.

Typically, herring is on the menu on two special occasions: Ash Wednesday and Vlaggetjesdag (Flags Day). Ash Wednesday marks the start of Lent, the fasting period for Catholics. During this period meat is off the table, so eating a fatty type of fish like herring is a good starting point. Vlaggetjesdag, in June, is the day the first batch of premium herring is sold. The first barrel of herring is auctioned off for charity in Scheveningen. Several cities host a ‘herring party’ to celebrate and to increase commerce.

The Dutch have been consuming herring for over a thousand years. At first people fished for herring for personal use, this changed around the year 1000 when the commercial herring fishing arose. Fishing villages emerged rapidly along the coast and herring fishing became an industry of large economic importance to the Netherlands from the sixteenth to the eighteenth century. During the first decade of the seventeenth century alone, the herring fleets are calculated to have comprised 770 ships. In contrast, during the heyday of whaling in the second half of the seventeenth century, only around 150 to 200 ships set out each year.

Although the Dutch call the dish raw herring, it is in fact not raw. The herring has been frozen and then laid in salt for a couple days to ripen the fish (soused herring). Herring was not only nutritious, it was also inexpensive and it had a reasonable shelf life. When the fish was kept in a barrel of salt, it could be consumed all winter.

Dutch traditions are not limited to eating habits. The faience production was a tradition in itself. Find out more about the history of Delfware.

The finest herring dishes which we have handled

Marked VDuyn in blue for Johannes van Duijn, the owner of De Porceleyne Schotel (The Porcelain Dish) factory from 1764 to 1772, or his widow Van Duijn- van Kampen, the owner from 1772 to 1773

Each painted in the center with a scaly herring, the rim lightly molded and painted with a foliate border centering at the top, bottom, sides and corners with a large flower head below the yellow scalloped and barbed rim edge.

Each painted in the center with a scaly herring, the rim lightly molded and painted with foliate scrolls centering at the top and bottom a foliate device issuing leafy stems, and at each of the notched corners a trefoil bud issuing leaves, scrolls and a pendant bellflower.

Each painted in the center with a scaly herring within a border of leaves and scrolls on the scalloped and barbed edge of the chamfered rectangular rim.