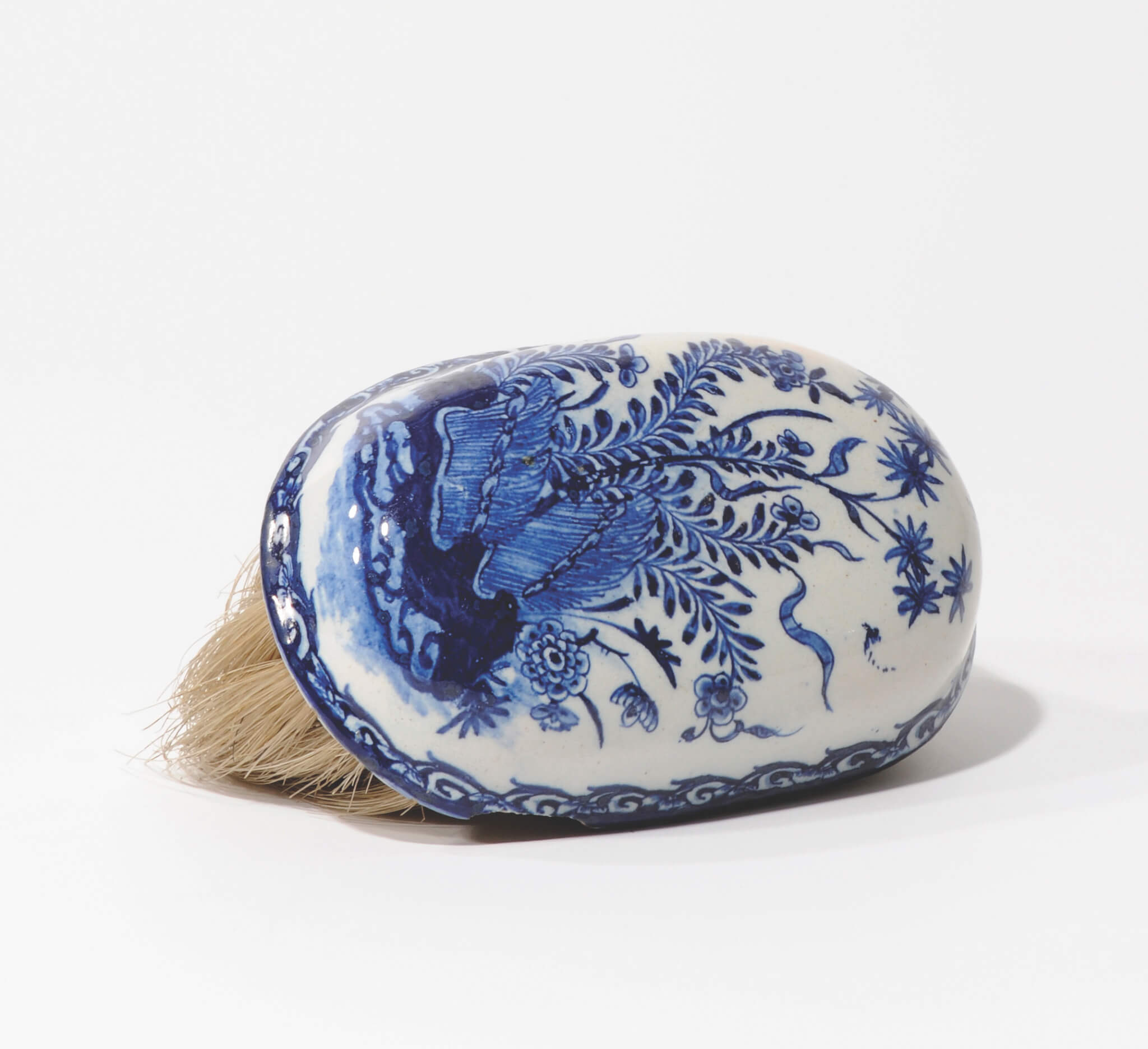 Brush backs are rare surviving utilitarian objects that were made by Delft potters in imitation of the more expensive silver prototypes. Intended as clothes brushes, these practical objects were “often given as bridal gifts [and] may bear a date or a monogram, but since they were not signed, the makers…remain anonymous”.[1]  They were made by binding small clusters of horsehair with thread and then affixing the clusters with resin to the interior of the pierced holes on the underside of the back. Ordinary clothes brushes would have had wooden backings, while more luxurious versions could have silver or ceramic variations. The 1758 inventory of De Grieksche A (The Greek A) factory describes ‘2 blaede van klereborstels’ (‘two backs for clothes brushes’).[2] 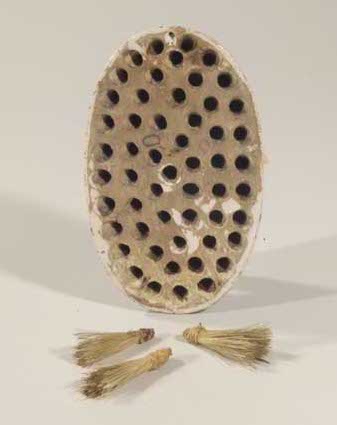 Various materials were used to make brushes, the most common being pigs’ bristles and horsehair.[3] Clusters of hair would be bound together and affixed with resin to the interior of the pierced holes on the underside of the brush back, as can be seen in this blue and white oval brush from circa 1730. The unglazed underside of this oval brushback, is pierced with rows of holes filled with plugs of horsehair bristles. It is painted with two insects flitting above bamboo, prunus and other flowering plants growing behind banded hedges on a plateau within a foliate-scroll border around the rim.

The shape and dimensions of brush backs were determined mainly by its function. Most brushes were designed as oval to accommodate the user’s comfort and size, however, by varying the decoration, the factories were able to put very different products on the market.[4] 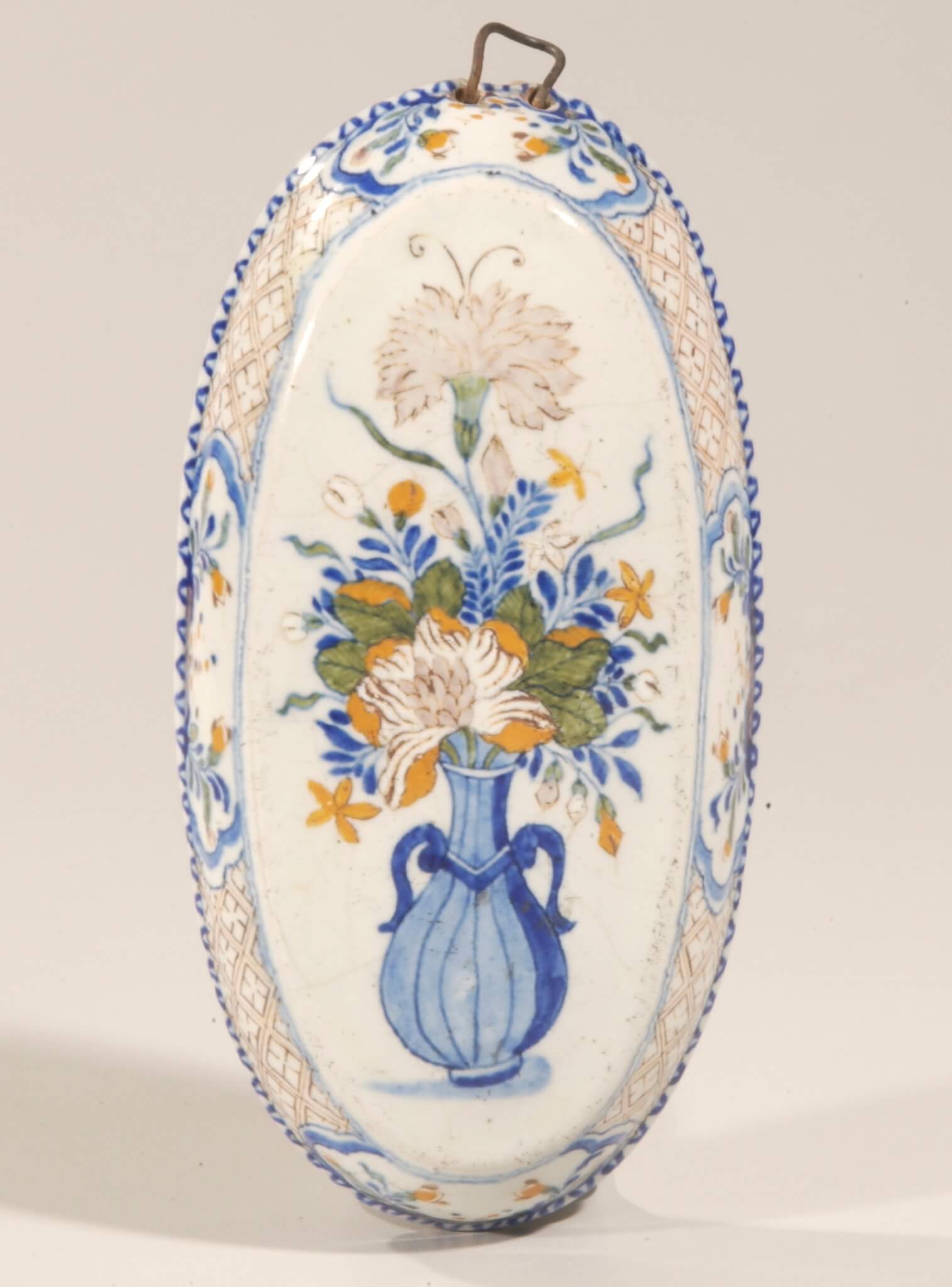 The shape of this polychrome oval brush back, from circa 1730 indicates its use as a clothes brush. Painted with a carnation, a peony and other flowers and foliage in a two-handled bottle vase. The scene is delicately painted within a trellis diaper border interrupted with four panels of flowering branches above a blue dentil band at the edge. The top of the rim is pierced with two suspension holes for hanging it from a nail in the wall. Although this brush is very decorative, it is a practical object that was not made merely for show. 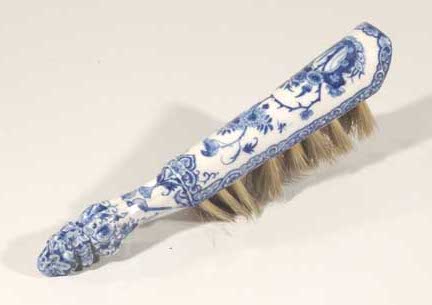 Delftware potters also produced elongated brushes, such as this blue and white brush from circa 1730. The rounded tapering brush back is painted with a bird perched on a sinuous flowering tree trunk growing behind a pierced rock and chrysanthemum plant, within a floral and foliate-scroll border. As with the other brushes, the unglazed underside is pierced with holes for the bristles. The fluted baluster-form handle is painted with a pair of birds perched on a stylized urn beneath floral borders on the double-knopped terminal. 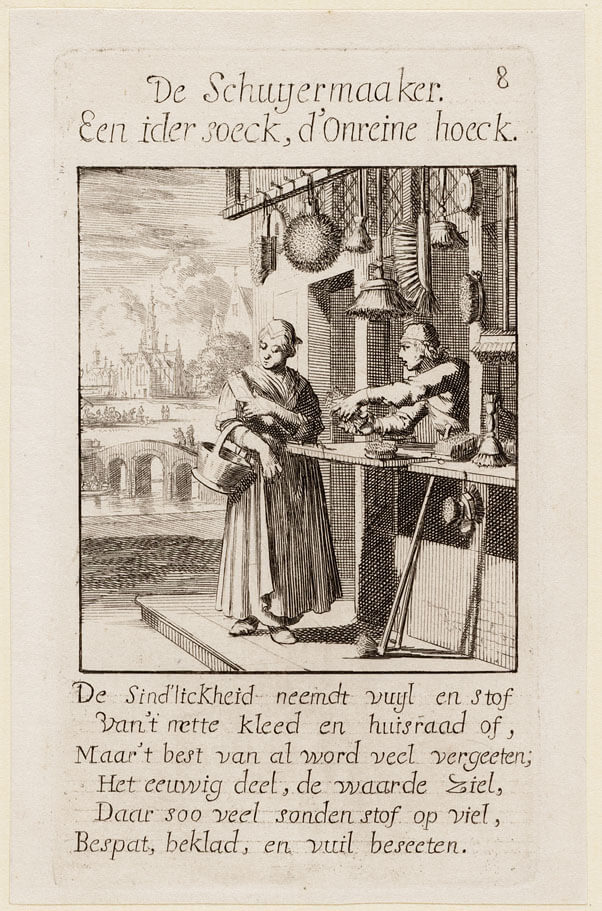 In Jan Luyken’s print of ‘De Schuyermaaker’ (‘The Brush Maker’) from the 1694 emblem book Het Menselyk Bedryf (The Book of Trades), various oval brushes can be detected: one on the front corner of the display table, three suspended from cords below the table, and another two pinned above one another on the window frame to the right. The customer is shown trying out a rectangular brush on her clothes.

The wide array of brushes displayed in the shop could be used for many different things. Brushes were used for scrubbing floors, washing the steps of the stoop, sweeping carpets, whisking rooms and cleaning pans.[5] Although brooms are a form of brush, being made of straw or twigs, they were produced by other professionals, the broom makers, rather than the brush makers.

The print is accompanied by a moralistic poem on the importance of a clean, ‘pure’ soul, and stresses the notion of “cleanliness being next to godliness” by incorporating a church in the background of the landscape.[6] 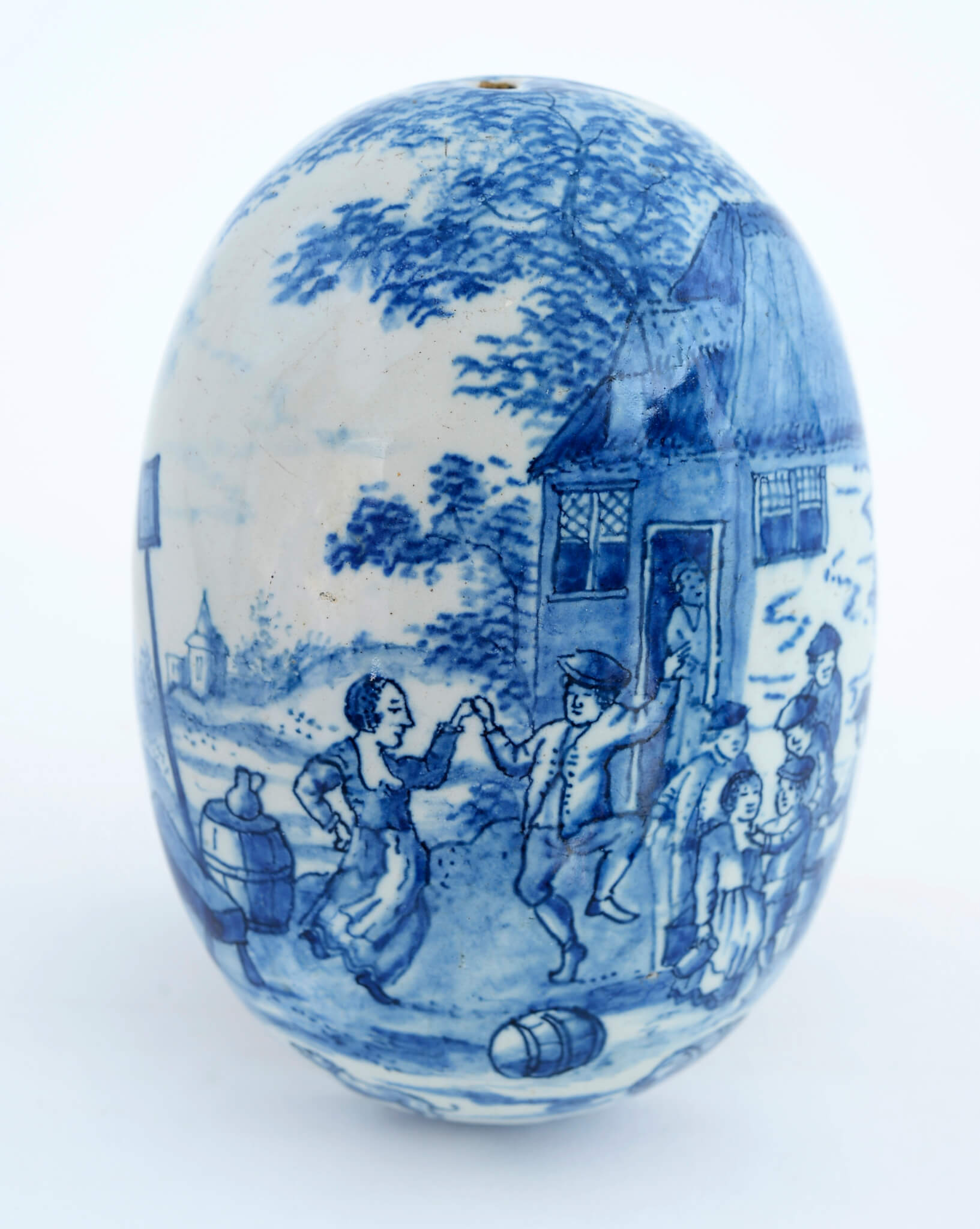 The decoration on this blue and white oval brush back, also from circa 1730, shows a couple dancing near five men and the tavern maid. A woman at the tavern door observes the scene from afar. This subject is taken directly from an etching of Peasants Dancing by the Flemish artist, David Teniers the Younger (1610-1690). It is not unusual for the decoration on Delftware objects to relate to print sources. The prints were transferred to the objects by piercing the lines of the print to create a stencil. The stencil would have been placed on the objects’ white tin glazed surface and was then dusted with charcoal, which would leave a dotted outline for the painter to follow and complete the lines with cobalt-blue pigment.

[6] Everyone look, for the grubby nook. The senses take off dirt and dust from the finest cloth and homely goods, but the best of all is frequently forgotten; The eternal goal, the reverent soul, on which fell so many sins of soot, squirted, smeared, and dirt possessed.