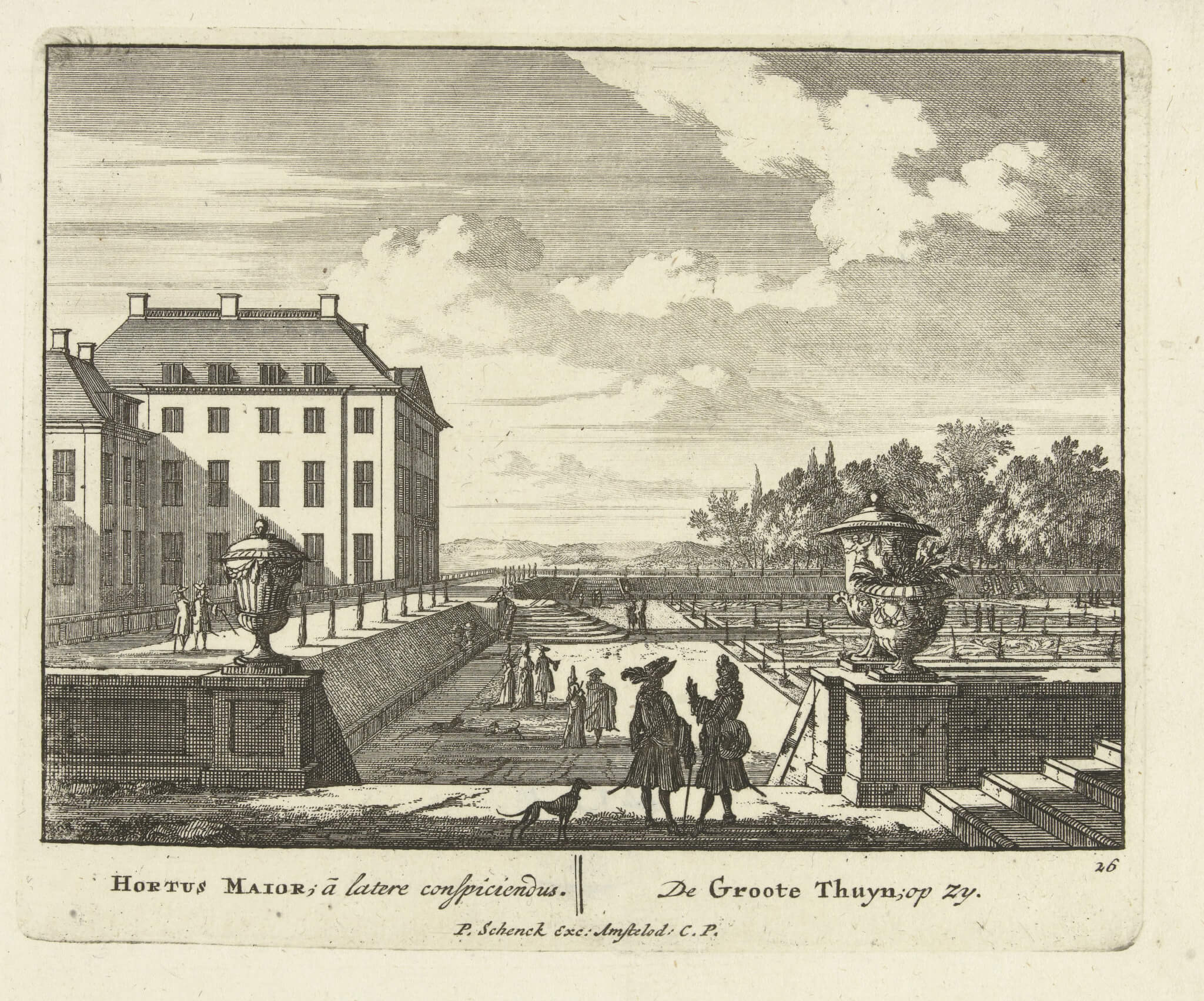 In the seventeenth century, the baroque taste was fully integrated in almost all aspects of the built environment, including architecture, interior design and the garden. The formal or Baroque garden was designed after the spectacle of Versailles and evolved in Italy and France in the early seventeenth century. The immense gardens of Louis XIV, designed by André Le Nôtre (1613 – 1700), had enormous avenues, formal parterres and water features that were meant to portray the king as completely dominant over nature. The grandiose style had lasting appeal and spread across European courts until the mid-eighteenth century.[1]

Formal garden features such as parterres and long allées defined the baroque garden style. The parterres consisted of plant beds and box hedging that were arranged in symmetrical and ornamental patterns while the allées, or long walks, were neatly bordered by trees or hedges. Additionally, the gardens were decorated with exotic plants, animals, shells and stones, as well as antiquities, classical sculpture or porcelain and earthenware objects. In these magnificently designed gardens, water was re-routed and channeled to supply canals, basins, and fountains that were found within the grounds. The design and decoration of the gardens depended not only on the natural environment, ranging from sunny Italian hills to wet Dutch flatlands, but also on artistic and economic considerations. The degree to which nature was re-modeled was seen as a direct expression of the power and status of the garden owner.[2]

Many of these aspects are discernible in surviving baroque gardens, such as Palace Het Loo in the Netherlands and Hampton Court in England. Palce Het Loo was built between 1684 and 1686 for stadholder-king William III and Mary Stuart, who both actively participated in the design and construction of their gardens and palace.[3] Often mislabeled the “Versailles of Holland,” the palace’s Dutch baroque garden was designed in the general Baroque formula established by André Le Nôtre with an axial layout, fountains, parterres and statues. Although the gardens were more enclosed and smaller than those in Versailles, one feature surpassed the French design: the availability of fresh water from the high groundwater. Water and fountains were perhaps the most important ornament in the newly designed gardens, as garden theorist Antoine-Joseph Dezallier d’Argenville wrote in 1709. From great cascades, or water-staircases to single jet fountains and long canals, all varieties of water features were present in Baroque garden art.[4]

European courts also availed themselves of the numerous exotic plants and flowers from the Far East that where provided by the Dutch East India Company (VOC). In 1675 William requested the VOC to supply him with curiosities from the natural environment, both plants and animals.[5] When William and Mary came to power, they also reworked the gardens at Hampton Court Palace in which they introduced the Dutch Baroque style from their Palace Het Loo They transported a large number of rare and exotic plants from their palaces in the Netherlands to embellish their new English palaces and gardens in the Baroque style.

Monumental garden urns and vases filled with the most exotic plants and flowers enriched the formal garden and also provided useful ‘punctuation’ to emphasize the regularity and geometry of garden layouts.[6] Blue and white ‘porcelain’ garden urns filled with flowers were first seen at the Trianon de Porcelaine, the summer residence bordering on the gardens of Versailles. Several paintings and prints show the way in which the garden urns were displayed in the royal gardens. For example Vue du bouquet de l’Etoile ou Montagne d’eau avec Alphée poursuivant Aréthuse, one of the paintings of the Versailles’ gardens by Jean Cotelle le Jeune (1642 – 1708), shows blue and white vases crowning the cornice of the trellis behind a fountain. Further, the arrangement of plant pots on the parterre of the Orangerie is depicted in Vue cavalière du château, garden bas et de la ville de Saint-Cloud, by Etienne Allegrain (1644 – 1736). The painting also shows cubic wooden pots for shrubs that are alternated with blue vases also used for shrubs. These are surrounded by smaller white vases. At the end of the parterre, blue and white earthenware vases are placed in the garden amphitheater.

William and Mary followed the French example of the gardens of Versailles and adorned their own gardens with blue and white Delftware, filling them with expensive exotic plants, such as orange trees and pineapple plants. Contemporary engravings of the gardens of Palace Het Loo by Jan van Call I (1656 – 1706) and Laurens Scherm demonstrate the use of garden vases, either encircling fountains or placed on pillars or on a balustrade. The Delftware garden urns were also left empty or had a closed cover and functioned purely as decoration.

Although excavations of the Palace Het Loo gardens show that the Delftware garden urns were indeed placed outside, they were also used indoors.[7] During the summer months, when no fires were lit, garden urns, vases and bowls were used to decorate the fireplace. Prints by Daniel Marot show that actual vases containing plants were also put in the fireplace.[8] Garden vases could also be placed on a table where the other Delft ‘porcelain’ objects were displayed, for example in the specialized dining rooms that were built at the end of the seventeenth century, which accommodated new, large pieces of furniture, such as buffets. Water buffet services could include a monteith, wine cooler, cisterns and sometimes even a fountain and a basin.

At the end of the seventeenth century it became customary to bring the beauty of nature and the garden inside. Flower vases were filled with all kinds of exotic cut flowers and placed indoors. The decoration on Delftware also reflected the interest in the beauty of nature. Objects for the water buffet, such as fountains, coolers, and vases, such as the present one, and large flower vases were often decorated with images of grand fountains in elaborate landscapes or refined gardens, as the decoration on the present vase shows. A large covered Delftware vase like the present must have been a true eye-catcher in the interior. Moreover, being made according to the fashion of that time, the vase would perfectly match the baroque style of the interior.

[1]  V. Remington, Painting Paradise: The Art of the Garden, The Royal Collection Trust 2014.