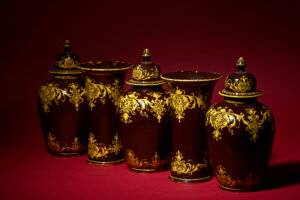 At the upcoming edition of TEFAF Maastricht, Amsterdam based dealer Aronson Antiquairs will bring to market one of the best Delftware collections of the past decades. The collection, which was in a large part assembled by private Dutch collectors over a period of approximately thirty years, comprises many highlights. Although it has its center of gravity in the eighteenth century, it also contains several wonderful early objects. 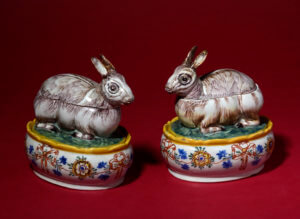 “What we can bring to an art fair like TEFAF, really depends on what we can source in the year, or sometimes years, running up to an event like this” says Robert Aronson. “Although we work year round to find the best Delftware objects, good objects are so incredibly rare, that sometimes we cannot even get a hold of them” Aronson continues. The collection to be seen at TEFAF this year can rival with ancients collections such as those of the Rijksmuseum in Amsterdam, the Gemeentemuseum in The Hague or the Musées royaux d’Art et d’Histoire in Brussels.

This collection was compiled with great love and enthusiasm under the auspicien of the Aronson family. The Dutch collectors did however buy from several sources and were able to therewith bring together such a diverse and high quality collection. Some of the highlights are ‘The Stella Ewer’ made in Delft around 1675 and formerly owned by the renowned Dutch entrepreneur Dr. F.H. Fentener van Vlissingen (1882-1962); the brown glazed garniture produced in Delft around 1715 of which the only comparable set, but lacking its covers, is in the aforementioned Brussels museum; the wonderful and very rare pair of polychrome hen tureens and covers on stand made by Jacobus Adriaensz. Halder, the owner of De Grieksche A (The Greek A) factory from 1764 until 1768; or the pair of polychrome crouching hare tureens and covers, Delft, circa 1765, which in 1929 were exhibited at an exhibition at the Rijksmuseum in Amsterdam.

Delftware has been a national symbol of Holland for almost 400 years. Although it was initiated by the demand for the waning importation of Oriental porcelain from the 1640s, the history of Delftware starts in fact earlier. In the first half of the fifteenth century, mercantile cities such as Bruges and Antwerp in the southern Netherlands (now Belgium) became familiar with earthenware, so-called maiolica, from southern Europe through both trade and political contacts with Italy, Spain and Portugal. Dutch Maiolica is an earthenware product coated with a tin glaze on the front or exterior and a highly translucent lead glaze on the back or base. Maiolica dishes were fired face down on three spurs that often left marks which remained visible in the central design. 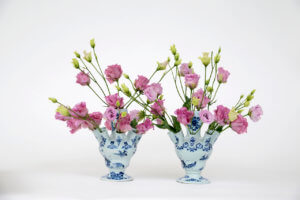 By the middle of the fifteenth century, largely through the gradual migration of potters from southern Europe through France to the Netherlands, the earthenware industry had become well established in Antwerp. In the second half of the sixteenth century, under religious pressure, many of the reformists and Protestants were forced to leave Antwerp. Most moved to London, Hamburg or the northern Netherlands and specifically to the city of Haarlem (the city after which New York’s ‘Harlem’ was named) near Amsterdam.

The rise of the potting industry in Haarlem occurred simultaneously with the decline of the beer brewing industry in the town of Delft. As the Delft brewers ceased production at the beginning of the seventeenth century because the town’s canal water had become too polluted to be used to make a potable brew, their large abandoned buildings on the canals were quickly occupied by the pottery-makers, who could utilize both the space and the convenient water source for the working of their clays and for the transportation of their raw materials and finished wares.
At precisely the same time and throughout the seventeenth century, the Dutch developed a dominance in the European trade with China through which they imported large cargoes of luxury goods, including the much-coveted blue and white porcelain. By the middle of the century, however, a war in China interrupted the production and exportation to the Netherlands of Chinese porcelain, which declined from a quarter million pieces per year to a mere trickle. The potters in Delft seized the opportunity to fill the void, and they began producing earthenwares in emulation of Chinese porcelain, which they successfully marketed as “porcelain.”
From the 1680s the Delftware industry has constantly innovated with new shapes, decorations and functions. Through the influence of Queen Mary, the taste for painted Delftware spread rapidly through a wealthy European elite. Because of its remarkable diversity of shapes, the delicacy of the decoration and the gaiety of its colors, Dutch Delftware became the source of inspiration for many ceramic centers throughout Europe and even Oriental potters. 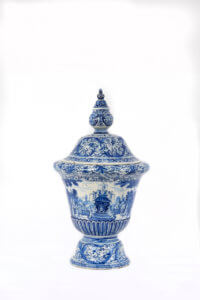 Despite its predominant role in the history of European ceramics, Dutch Delftware only became a serious source of interest from art historians and collectors in the second half of the nineteenth century, a period that rehabilitated the decorative arts, and particularly ceramics. Delftware was assembled, classified and studied, and finally given its honorable recognition alongside seventeenth and eighteenth century European ceramics. 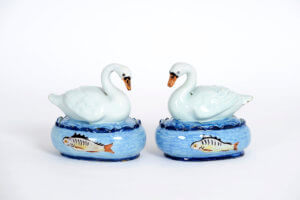 Since 1881, over five generations of the Aronson family have brought to market the highest quality Delftware and assisted many collectors in the formation of their collection over the years. Aronson Antiquairs was founded in the city of Arnhem and is one of the oldest antique dealers in the Netherlands. Although initially they were general antiques dealers, over the past 70 years a preference for the Dutch national product arose, seventeenth and eighteenth-century Delftware. This passion has ensured that Aronson Antiquairs has specialized fully on this subject since the mid-1990s. 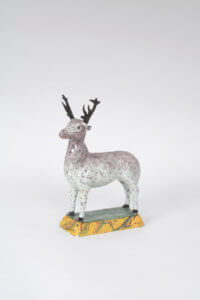 Many Delftware collections formed the basis for many museum collections. For example, the collections of the Rijksmuseum in Amsterdam, the Gemeentemuseum in The Hague (soon to be Artmuseum The Hague) and Musées royaux d’Art et d’Histoire in Brussels were all initially founded with private collections. This also holds true for the majority of the collections in the British Museum in London, the Louvre in Paris, the Metropolitan Museum in New York or the National Gallery of Victoria in Melbourne, Australia amongst others. 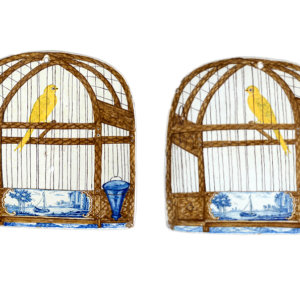 However, as Robert Aronson explains by quoting his late grandfather, “selling or donating objects to a museum means that the object would never return to the open market.” In that light, some private collectors specifically want future generations of art collectors to enjoy the objects and the collecting as much as they did. As is the case with the present Delftware collection that will be on display at TEFAF Maastricht. “So a completed art collection does sometimes not go to a museum, but it returns to the advisors, the art dealers in this case. The collection gave tremendous pleasure to its Dutch collectors and we hope the objects will continue to spread joy for future generations.”

TEFAF Maastricht will be held from March 16 through 24 at the Maastricht Exhibition and Congress Center (MECC).

Further information and hi-res images, please contact us by e-mail or by phone.