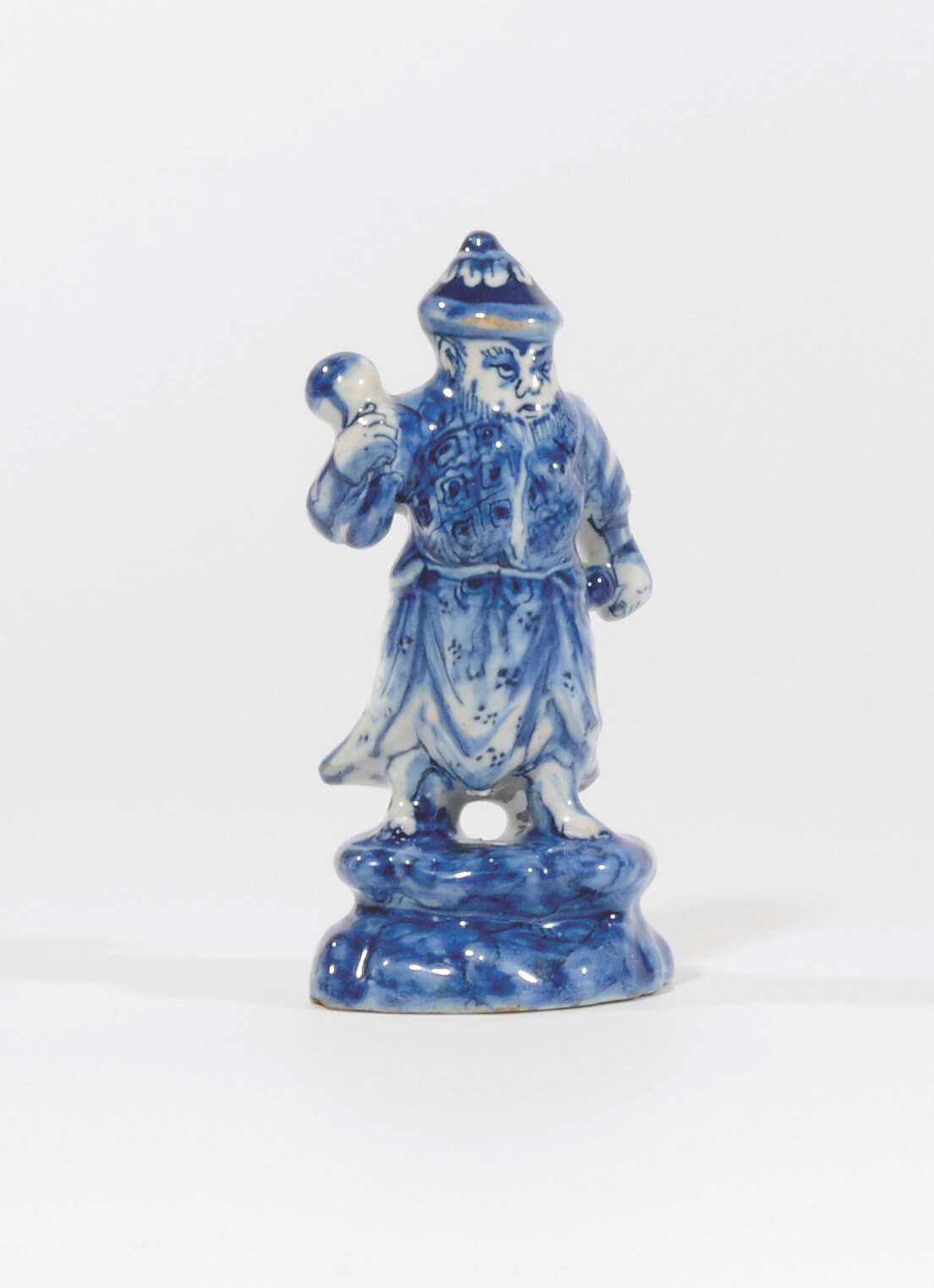 He only stands about 11 cm. (4.5 in.) tall, but the fierce expression and posture of this Delftware Chinese warrior figure does not make him less impressive. In the seventeenth century and the beginning of the eighteenth century, the fascination for the Far East was triggered nationwide by the many curiosities that were brought home. Artists and craftsmen created wonderful and intriguing pieces of art that imitated the Chinese, Japanese and Indian treasures, or that combined Eastern and Western shapes and patterns into so-called chinoiseries.

The Delft figure of a Chinese warrior is clearly inspired by Chinese figures, and he is most likely made by the Delft potters after an example in enameled biscuit of the Kangxi period (1662-1722) or a similar figure in soapstone or wood. This bearded figure, wearing a conical hat and a billowing robe patterned with clusters of dots, probably represents Guandi (Guan Yu), the Daoist god of war. This figure is marked PAK in blue for Pieter Adriaensz. Kocx, owner of De Grieksche A (The Greek A) factory from 1701 to 1703, or his widow Johanna van der Heul from 1703 until 1722. 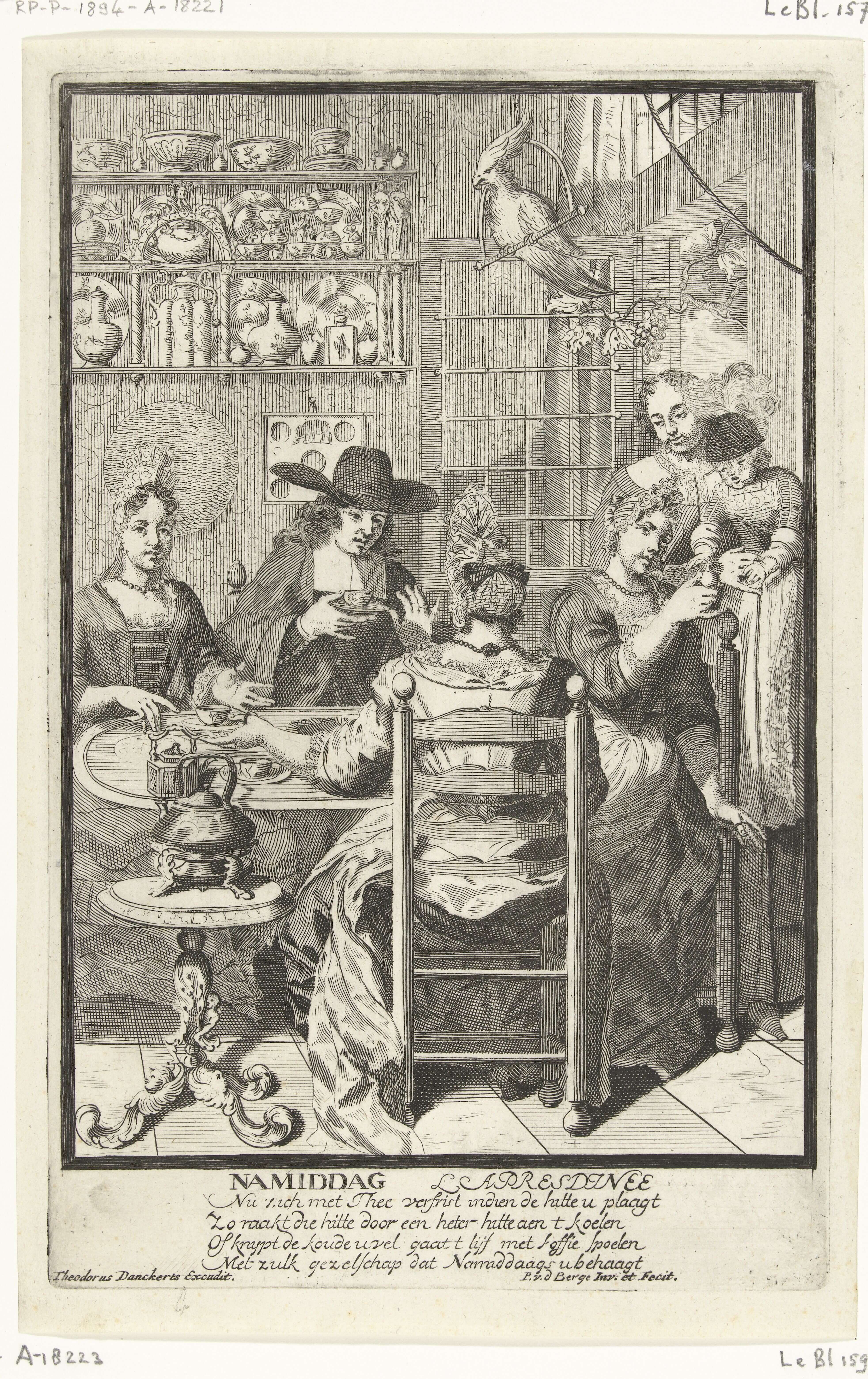 Chinese small statues were already brought to the Netherlands in the seventeenth century. At first, they were transported only sporadically in the cargo of the VOC (Dutch East India Company) employees as souvenirs or on request of collectors of curiosities, meaning that they were not available for the common people. In W. and J. Blaeu’s Nieuwe Atlas, published in Amsterdam 1655, the margin of one page of the Chinese section was embellished with a print of a seated Guanine, strongly resembling a similar statue in the collection of Phillip Allen.[1] But in the second half of the same century the VOC, aware of the popularity of everything exotic, shipped large numbers of little Japanese and Chinese porcelain figures to the fatherland. In the eighteenth century, the previously exclusive figures became available to a wider audience which led to the fact that the figures were included in the domestic interior.[2]

In the interiors, they were placed on mantelpieces, as can be seen in a trompe l’ceil painting by Pieter Jansz. de Ruyven. Painted in 1719, Schoorsteenstuk met aardewerk en papegaaien (Mantelpiece with Earthenware and Parrots) tricks the eye by showing a carved console on which chinoiserie or Chinese figures were placed, either made of carved wood or red stoneware.[3] On the chimneypiece several pieces of both larger and smaller Delftware vases in Chinese style were symmetrically placed, and some more figures were placed between them. A print of Pieter van den Berge De namiddag (The Afternoon), dated circa 1710, shows in the upper left corner three shelves on which a tea-rack is placed with three oriental figures.[4] Although it is unclear of what kind of material the figures are made, the print gives an insight in how they were used at that time.

The aforementioned warrior figure is one of the early examples of these Delftware chinoiserie figures, together with a figure of a lady, which is dated circa 1705. This figure of a lady, holding a fly whisk, is marked LVE for Lambertus van Eenhoorn, owner of De Metaale Pot (The Metal Pot) factory, from 1691 until 1721. 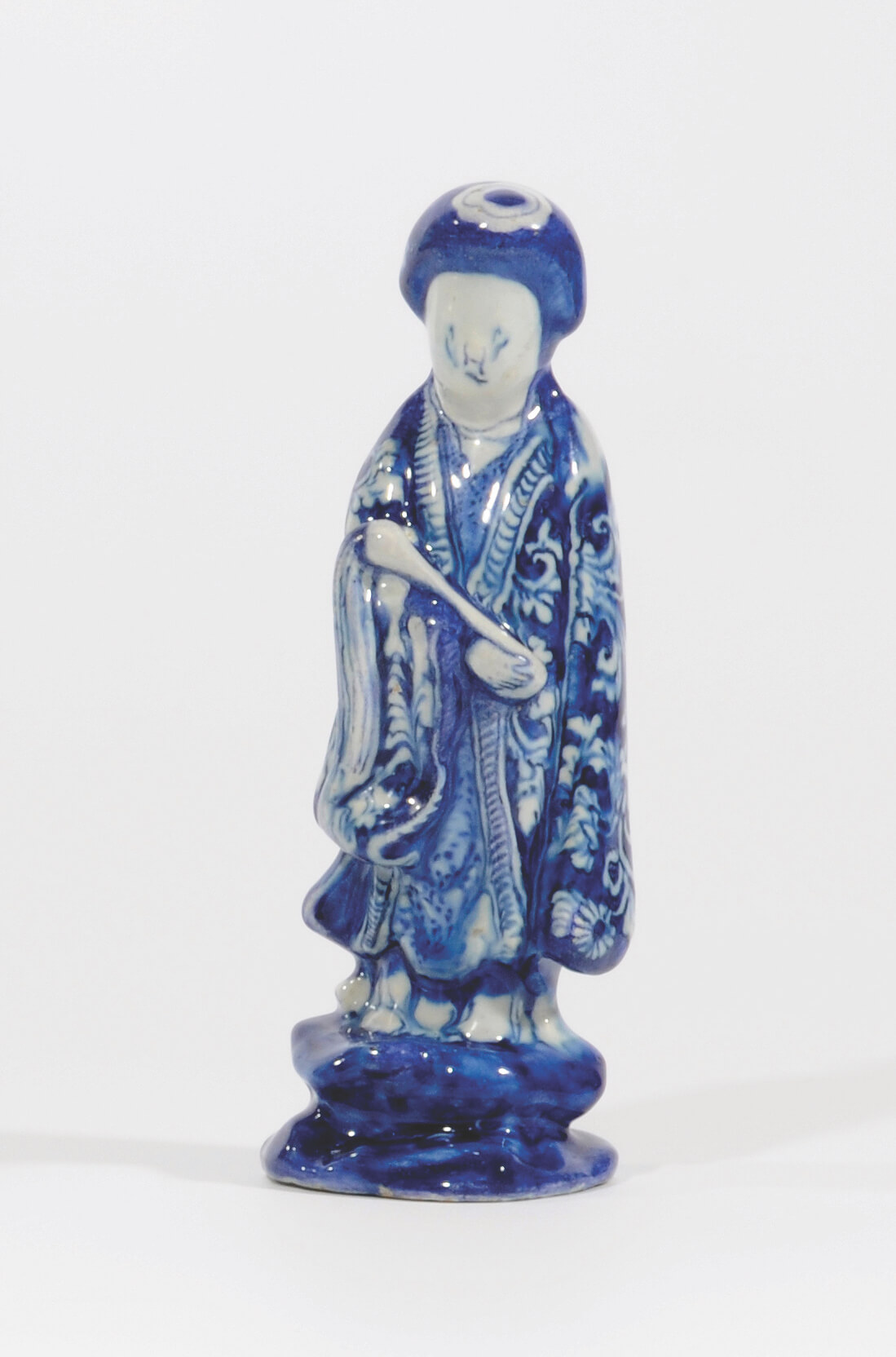 Delft chinoiserie figures resemble the Chinese ones so much, that it is most likely that the Delft vormers (shapers) used the Chinese originals to create the plaster casts, which were used to form slabs of clay in. Delftware figures were produced in several color patterns: unpainted with a white glaze, decorated in blue and white, a polychrome colorscheme or made of red earthenware. Especially the blue and white decorated figures with marks show that chinoiserie figures were produced primarily in the factories of De Grieksche A under the leadership of father Adrianus and son Pieter Adriaensz. Kocx (respectively 1687-1701 and 1701 – 1703 or his widow until 1722) and in De Metaale Pot when Lambertus van Eenhoorn was in charge (1691-1721 or his widow until 1724). The marks also clearly show that the production of beautiful Delftware chinoiserie figures was already established around 1690, although it would not be surprising if production started earlier. It is difficult to attribute unmarked chinoiserie figures to a certain factory, since the same originals seems to have been used. For example, a blue and white lady figure of the exact same shape in the Rijksmuseum is marked AK, indicating that this model was simultaneously produced in both De Grieksche A and De Metaale Pot factories. The same lady is also known in both white Delftware and red earthenware.[5]

The Delft potters took as example figures made of enamelled biscuit porcelain produced in Jingdezhen during the Kangxi period, Blanc de Chine porcelain from Dehua or of other materials as wood, ivory, metal and soapstone. Well known figures in Blanc de Chine were figures of seated buddhas, roosters and Guanyin, the Chinese deity of comfort and mercy, much adored by the weak, the poor and mothers. Also Chinese and Western figures, some probably made exclusively for the export, were produced. 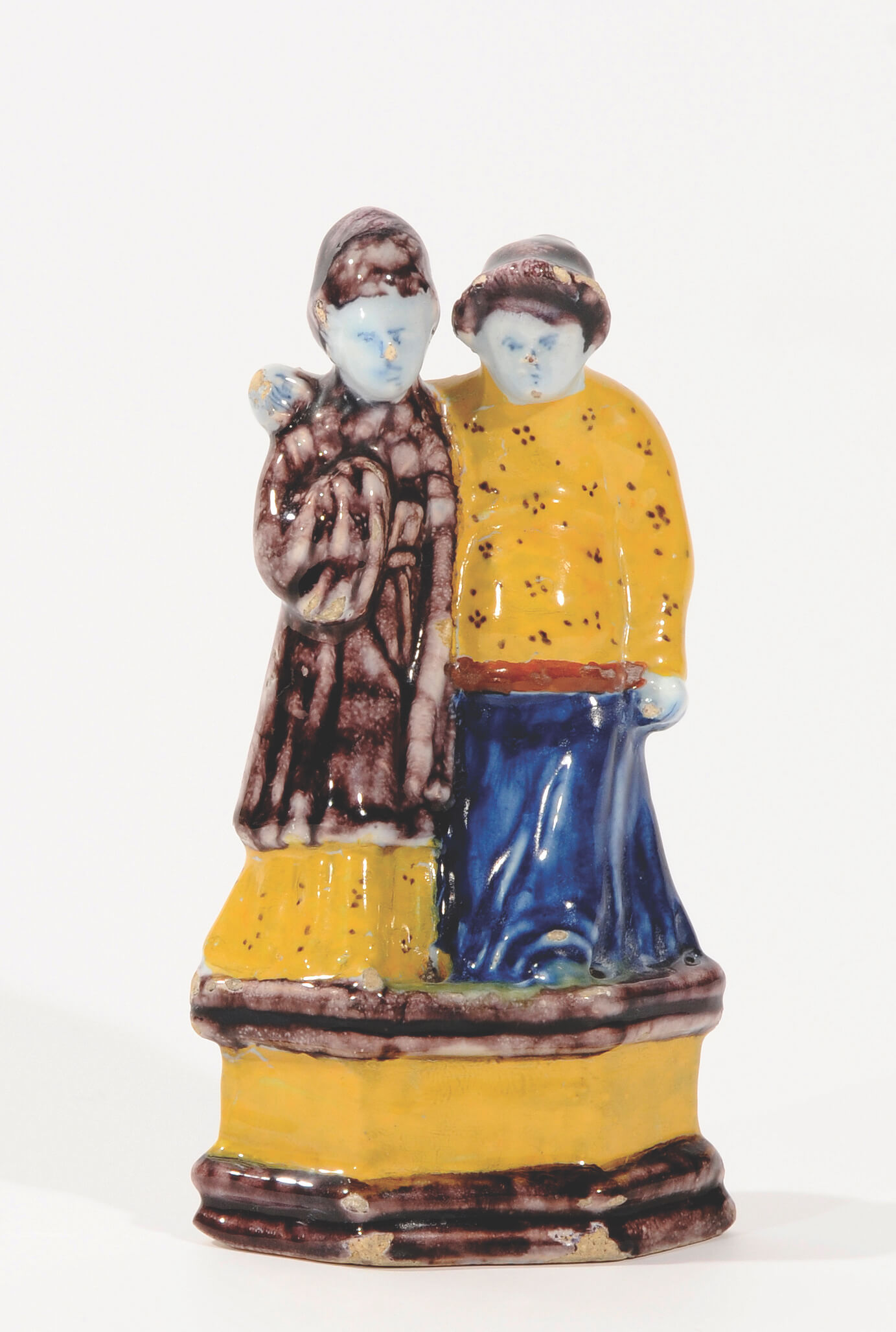 The above mentioned lady with the fly whisk was most likely made after a soapstone figure. This in contrast to the little warrior figure, which had enamelled biscuit porcelain model as its source. Also made after a Kangxi enamelled biscuit figure is this polychrome oriental couple, produced in circa 1735. It consists of a man standing next to a lady, his right arm around her shoulders and taking a step with his left leg, both wearing long, flowing robes. The Peabody Essex Museum in Salem has two of these biscuit groups, one with the man wearing a yellow gown and the lady a green robe, the other group with the man wearing green gown, and the lady an auburn dress.[6] According to William Sargent the figures may represent an official and his consort, which was an intimate subject probably made exclusively for the export market. He also refers to the unusual attire of the male figure by saying that the ferment is semi-military, but the cap is in the style worn by scholars during the Song dynasty.[7]

Over the years, the Delft potters became more familiar to the repertoire of shapes they could use and they started to combine them more freely. From Chinese symbols of longevity, such as peaches, to the many Chinese Gods, all were combined in a typically Dutch way in Delftware.