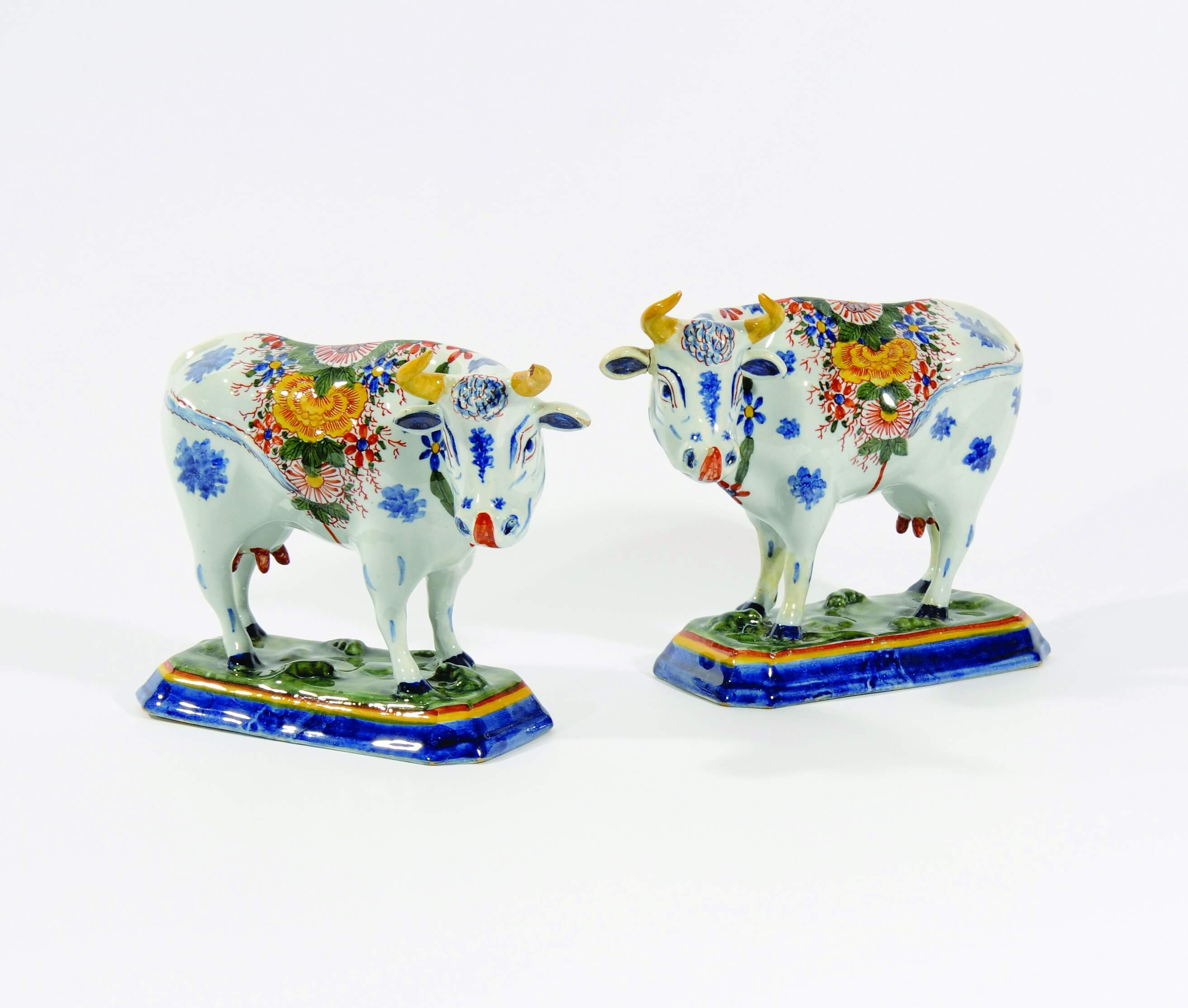 Cows are the most famous and beloved subjects depicted in Dutch Delftware. Since the eighteenth century they have adorned mantelpieces, furniture and window sills. They were always produced in pairs, with their heads turned towards each other and tongues lapping. Remarkably, these cows are almost always painted with lavish swags of floral garland draped around their necks and backs.

The Delft potters were inspired by a seventeenth-century tradition. Each year the Butcher’s guild in Holland would hold a parade on the day of its patron saint (St. Luke, symbolized by the apocalyptic winged ox). The parade celebrated the guild’s best-bred bull or cow. The prized beast was decorated with floral garlands and ribbons, and gilded horns that were often topped with oranges. The festive, bannered procession was led by drummers and pipers, followed by a singing and dancing chorus of guild members and townspeople. The animal would later be butchered and the meat served at the guild dinner, a portion of it being donated to the church and the local poor. From this tradition emerged the saying, ‘The guild ox is on parade’, which became synonymous with ‘this is a real feast!’

A century later, the guild’s tradition lived on in the imagery of Delftware cows. A pair of standing polychrome cows made around 1765 exemplifies the style. With blue-spotted hides and iron-red lapping tongues, the cows are wearing garlands of colorful flowers around their neck and back. The cows are marked with an axe in blue for De Porceleyne Byl (The Porcelain Axe) factory. Delftware cows were also designed as recumbent pairs, such as this beautifully decorated example made around 1765 in the city of Delft. Just as with the standing models, the neck and back of the cows are painted with colorful floral garlands. However, the cows are lying on a low green base edged in yellow. The pair is marked ‘3 astonne’ in blue script for De Drie Posteleyne Astonne (The Three Porcelain Ash-Barrels) factory and incised with an X. These cows were probably made during the production period of Drie Posteleyne Astonne’s owner Hendrik van Hoorn (1759-1804). The 1803 factory inventory lists ‘koetjes’ (‘small cows’), ‘koebeesten’ (‘cow animals’), and many more references to other animals modeled as figures or small tureens.[1]

A beautiful polychrome example demonstrates a variation of Delftware cows that were accompanied by a calf, or in this case milked by a youth or a milkmaid. Dated around 1760, the garland-draped cows are being milked by a lad wearing a manganese tricorn hat, a green jacket and blue breeches, and by a maid wearing a yellow hat with a blue dress and yellow stomacher. The milkers are seated beside a pail and accompanied by two frogs molded in the green top of the base. Toads and snakes are commonly seen modeled in relief on the bases of these forms. The toad can be seen as an allegory of death, emphasizing the probable brevity of this domestic beast’s useful life. Furthermore, the Dutch proverb ‘There lurks a snake in the grass,’ which means that there is a risk hidden in the game, may relate to the imagery of the snake. This is probably a reference to the cruel fate of the cow, that is now adorned in beautiful garland but will soon be slaughtered. In the 1627 Sinne- en minnebeelden by the Dutch poet Jacob Cats (1577-1660), a print depicting a Butcher’s Guild parade is illustrated with an accompanying metaphorical poem. It relates the ox, well-fed and beautifully decorated, but about to be slaughtered, to the dissolution of prosperity.

Dutch painters and printmakers were also inspired by the seventeenth-century guild ox parade and feast, and their images offer a similar depiction to the Delftware cows. The painting Portrait of a White Bull, circa 1647, attributed to Paulus Potter (1625-1654), shows a nearly bull with a flower garland around his neck. Painted by the same artist is The Young Bull, in the collection of the museum Mauritshuis in The Hague. It shows a toad in the foreground that mimics the imagery seen on the base of the Delftware cows.

A description about a Butcher’s Guild parade in De Volksvermaken (The People’s Pleasures) by Jan ter Gouw in 1871 offers a realistic account of the animals’ decorative flourishes, which are remarkably similar to the imagery on the Delftware cows. “The beast was draped with flowers and wreaths and its horns gilded; the drums and pipes came first; the guild banner was blowing in the air, the guild brothers cheerfully marched around it, and the townspeople followed along with humming and singing.”[2] Ter Gouw provides further insight as to why the decorated ox remained an important tradition even in later centuries: “When the parading of the guild-ox was discontinued by the guilds, the butchers themselves kept the tradition alive for a long time. When they had bought an especially large or fat animal, they would garland it with flowers and lead it around the town, accompanied by drums, so that all who saw the ample beast, would order a piece from it; and even though no guild was still related to the custom, the event kept its name because it was associated with something excellent.”[3]