Although quite a lot is known about the history and production of Delftware, one lingering question has been how these objects were distributed. Where were they sold after they left the factory? Many times, the pottery was sold directly from the factory. Delft factory owners often lived in buildings that faced the street, while the actual factory was located in the back of the building. The house was often equipped with a shop, described in the inventory as winkelkamer (shoproom). This room would be stacked with many Delftware items on shelves and racks.[1] The presence of a shop can be recognized when the inventory lists a counter, a type of furniture that would not exist in a typical home. 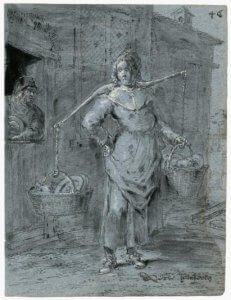 Other shops in Delft sold earthenware in addition to the factories in which they were produced. These ceramics shops typically offered a wide selection of objects, including Asian and European porcelain, earthenware from other parts of the Netherlands, and English creamware.[2]  That the Delftware potters did not shy away from using competing wares as English earthenware is pointed out in 1800 by R. Bakker, author of ‘Den opkomst, bloei, verval en tegenwoordigen toestand van de stad Delft in derzelver fabryken en traefyken’ : “Even a Delftware baker was not ashamed to use English porcelains for domestic use at home and at the table…”.[3]
Delftware was also sold at markets held weekly throughout the Netherlands. The kermis, an annual fair lasting up to three weeks was another important event for the distribution of Delftware. An official exportation document from 1691 indicates the importance of the markets. The form registered 86 cargoes, of which 22 were specified as ‘Kermisgoed.’  While these markets were important for the sale of Delftware in Delft and in other cities, the other earthenware and porcelain offered by merchants at these fairs competed with the Delft product. The city of Delft tried to protect its important commodity by prohibiting door-to-door sales of earthenware, glass, and porcelain objects. The sale of goods from the back of carts, barks or ships was also banned. The frequent renewal of these regulations suggests that they were common infractions.[4] A drawing by Leonard Bramer (1596-1674), a Delft artist also known for his illustrations used on Delftware, shows a street vendor selling earthenware from two wicker baskets hanging from a yoke.

The buyers of Delftware came from many different Dutch cities. At the end of the seventeenth century, Delft had a population of about 24,000. Its nearly forty factories produced upwards of a million pieces of earthenware, an amount that exceeded the needs of Delft and thus was distributed throughout the region. The majority of the consuming market outside Delft was concentrated in the four important trading cities of Amsterdam, Rotterdam, Gouda and Harlingen.[5] In these cities, Delftware was sold in shops that specialized in Delftware, or that combined Delftware with other ceramics. In 1742, Amsterdam housed no less than eight Delftsche winkels, shops that specialized in Delftware, in addition to several stores that sold all types of pottery. The Amsterdam store Lambert van Veldhuijsen at the corner of the Kloveniersburgwal and the Binnenamstel is a famous example. This was also the location of the biggest annual market held in September, the Amsterdam kermis, when merchants from out of town displayed their Delftwares and other earthenware  products.

From 1610 onwards, market stalls with pottery and glass filled De Nieuwmarkt in Amsterdam twice a week. The majority of sellers were German immigrants selling stoneware and glass from Siegburg and Heilbronn. The potters of Gouda and the Frisian cities were also important suppliers of earthenware for the Amsterdam markets.[6] The engraving by Casparus Commelin (1668 – 1731) of 1691 shows the Noordermarkt in Amsterdam, with its stalls and ships full of earthenware. Familiar shapes of molded Delftware dishes can easily be recognized.

Foreign markets
Amsterdam and Rotterdam were large harbor cities that were areas of distribution, but also functioned as transit ports for Delftware products. Merchants from these cities sent cargos of Delftware to other countries. In 1699, three boxes of Delftware were shipped from an Amsterdam merchant to Boston, USA. In 1703, five boxes went from Amsterdam to Stockholm, Sweden, and in 1696, employees from factory De Porceleyne Lampetkan (The Porcelain Ewer) loaded a large cargo of Delftware 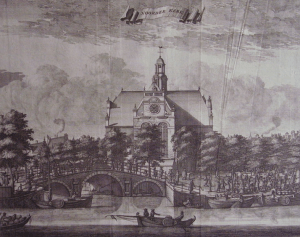 on a ship that sailed from Rotterdam to Hamburg.[7] Delftware was even shipped to Surinam and Curaçao, as well as Indonesia.Delftware was also shipped to Japan and used during the Japanese tea ceremony. One potter, Ogata Kenzan (1663 – 1743) even specialized in producing earthenware imitating Dutch Delftware. The oranda utsushi (literally, “Dutch copy”), or Dutch-style ceramics produced after several attempts at his Narutaki workshop surpasses mere imitation, because of its originality and perfection.[8]

Foreign merchants also frequently purchased goods directly from Delftware factories. In fact, several factories made exclusive deals with foreign merchants. For example, in 1663 the owner of factory In de Vergulde Boot (In the Gilt Boat), Augustin van Reijgersbergen exclusively sold his products to Antwerp merchant Jean Pousset. Factory owners Lambertus Cleffius of De Metaale Pot (The Metal Pot), and Adriaen Kocx of De Grieksche A (The Greek A) factories made a deal with the French businessmen Le Grand and Sauvage in 1689: these shopkeepers would only buy Delftware from the above mentioned factories, and Cleffius and Kocx would not deliver Delftware to any merchant in a radius of 30 miles around Paris.[9]

[2]  Not only ceramics shops sold porcelain, in De Paauw (The Peacock) factory a large quantity of Chinese porcelain was found, probably to be sold next to their own products.