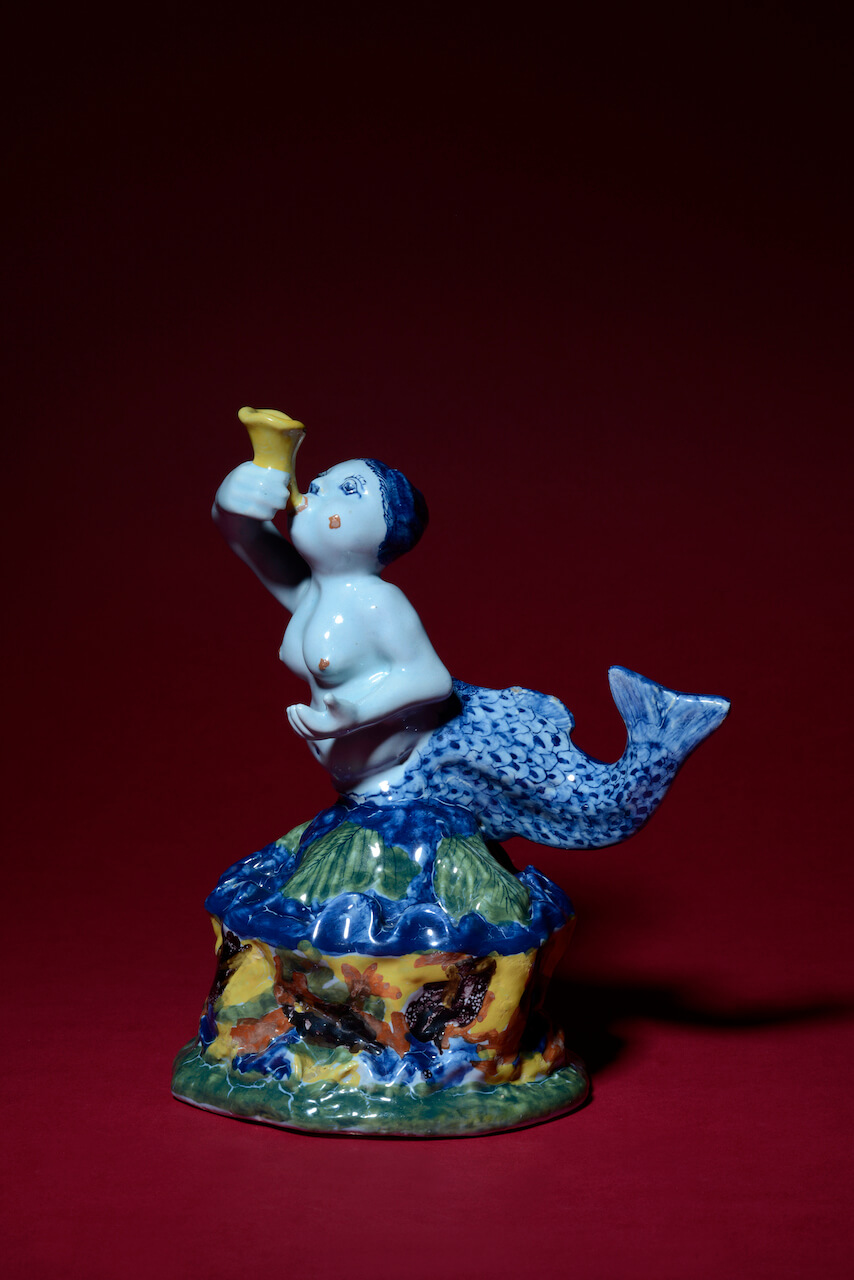 Ancient mythological stories featuring Greek and Roman gods have been leading sources of inspiration for painters since the Renaissance, when interest in the culture, philosophy and literature of classical antiquity skyrocketed. Mythological stories, in addition to Christian motifs, were widely depicted in the visual arts well into the Baroque and Rococo periods. Ovid’s Metamorphoses is the source of the most famous myths from Classical Antiquity. Not only in painting or sculpture, but mythological scenes can also be found on Delftware.

Once a favored subject of classical painters and sculptors, the female nude became taboo for thousands of years. The devout artist Sandro Botticelli changed this around 1486 with his painting The Birth of Venus. The Catholic Church was the largest commissioner at the time, but this painting was probably commissioned by the powerful Medici family of Florence. Completely outside the ecclesiastical tradition, Botticelli painted the beautiful and graceful Venus on the canvas in all her glory. From Italy, where paintings of naked goddesses became very popular, especially among the nobles, this fashion spread throughout the rest of Europe. 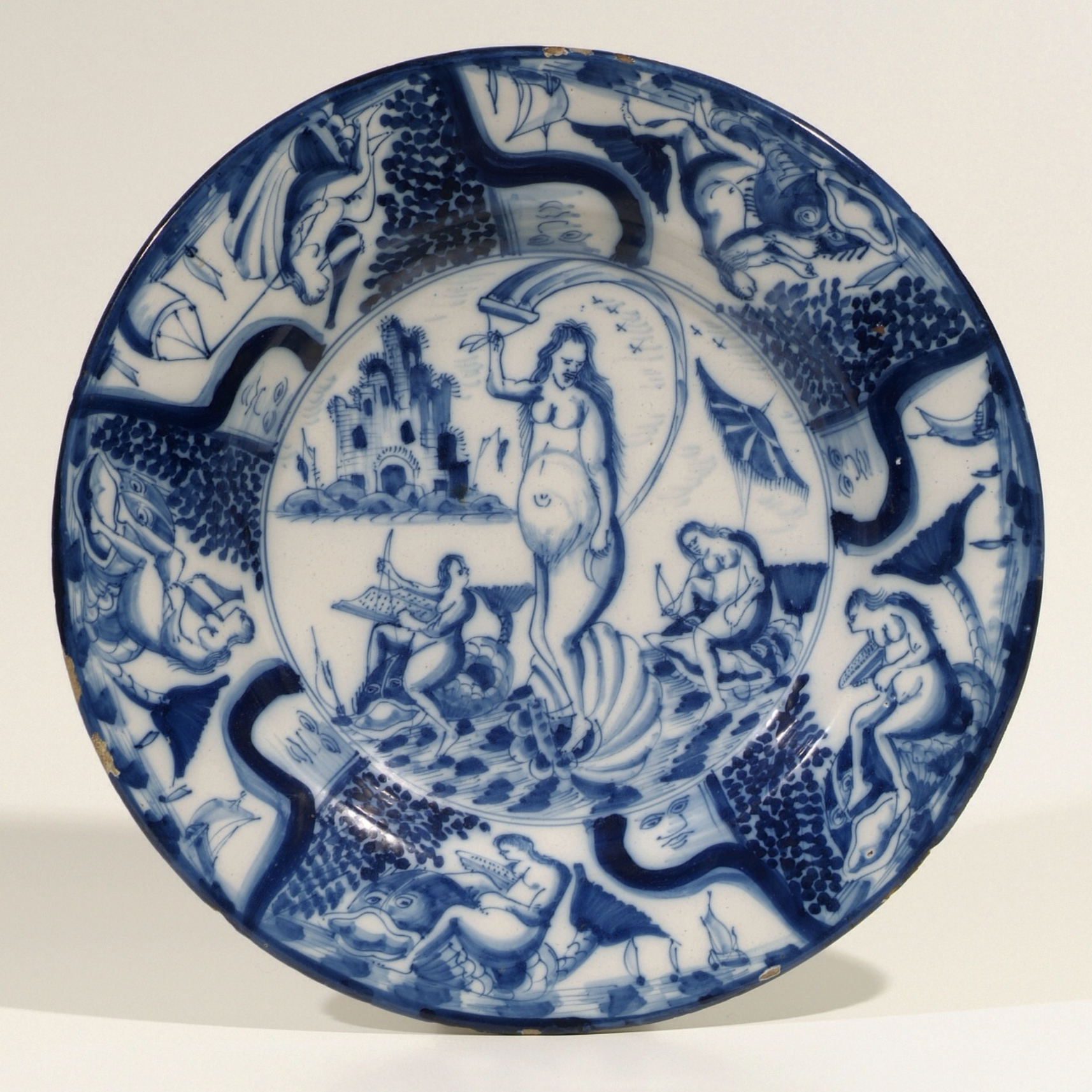 In the second half of the sixteenth century, the Metamorphoses had become very popular among the common people. The stories appeared not only in Latin for the literate population, but also in the vernacular and illustrated for the rest. In the illustrated versions of the Metamorphoses, a print would have a title and a short verse underneath. This text was not a literal translation of Ovid, but rather a moralistic explanation of the print. The first illustrated Metamorphoses in Dutch appeared in 1557. These prints were extremely popular and were reused with every reprint or new edition. This made the images so well known that later seventeenth-century painters often copied the compositions of the prints. No further explanation was needed about what was depicted. Hence, the compositions of paintings, depicting the same myth of classical times, often looked alike.

An early Delftware object depicting a mythological scene is this blue and white charger, from circa 1660. It shows the most famous classical myth of the birth of Venus. The story goes that the God Uranus had a son named Cronus who overthrew his father, castrating him and throwing his genitals into the sea. This caused the water to be fertilized, and Venus was born. After her birth she came ashore on a shell, pushed along by the breath of Zephyrus, the God of the west wind. As on this charger, the newly-born goddess Venus is often depicted standing nude in a giant scallop shell. She is flanked by a youth seated on a dolphin holding a compass and a book, and a nymph seated on another sea creature holding a parasol. Inspired by Botticelli’s painting, this charger is actually decorated after an engraving of Venus by Cherubino Alberti (1563-1615). 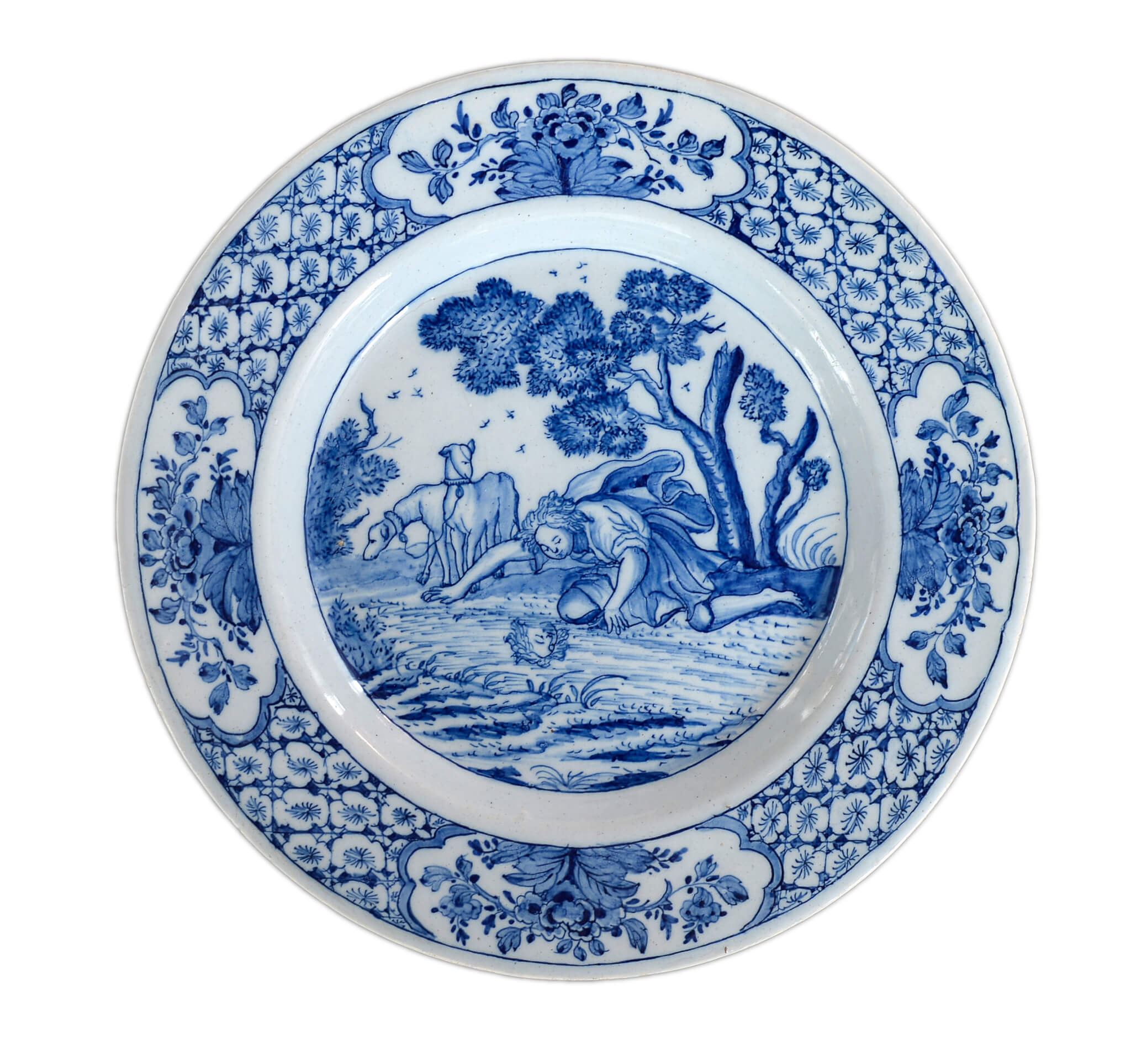 The classic mythological story of Echo and Narcissus from book three of Ovid’s Metamorphoses is another popular scene found in the arts. In the story, while Narcissus was walking in the woods, the nymph Echo saw him and fell in love with him. Narcissus sensed he was being followed and shouted “Who’s there?” upon which Echo repeated “Who’s there?”. When she eventually revealed her identity and tried to embrace him, Narcissus rejected her. She was heartbroken and spent the rest of her life in lonely glens until nothing remained of her but an echo sound. Nemesis (as an aspect of Aphrodite), the goddess of revenge decided to punish Narcissus after learning this story. This 1760 dated blue and white Delftware plate, depicts the moment when Narcissus became thirsty after hunting and was lured by Nemesis to a pool. He leaned upon the water and saw himself in the bloom of youth, not realizing that it was merely his own reflection. Narcissus fell deeply in love with it and was unable to leave the allure of his image. He eventually realized that his love could not be reciprocated and he melted away from the fire of passion burning inside him, eventually turning into a gold and white flower. 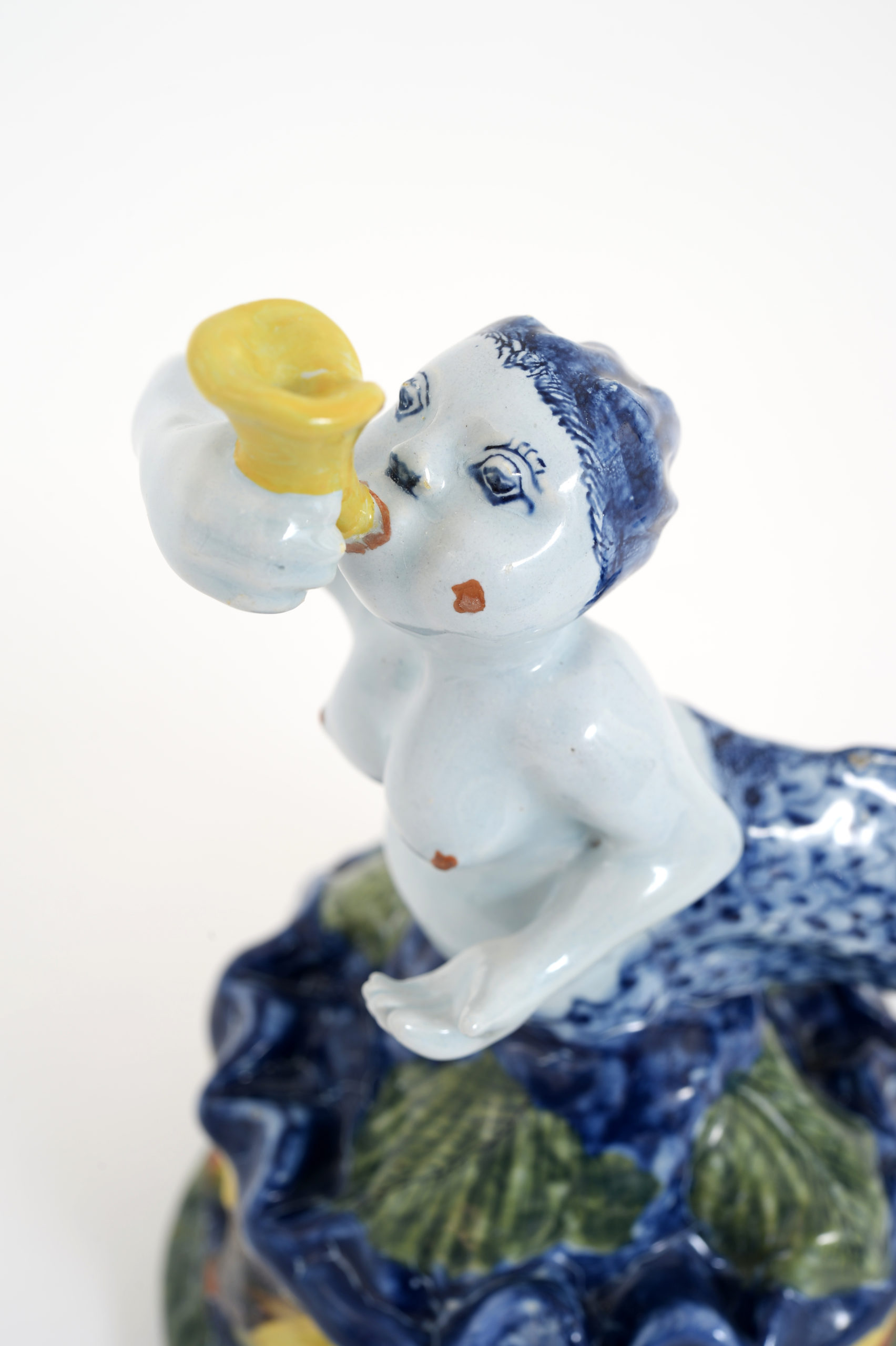 Mythological creatures were also depicted in art and on Delftware, for example, this polychrome figure of a mermaid from circa 1760. Mythological sea creatures first appeared in Western art starting in the fifteenth and sixteenth centuries when classical works were translated from Italian and Latin. Artists throughout the Netherlands, from painters to popular printmakers, cartographers and tile decorators produced images of the sea that were often detailed in classical literary sources. In one such work, the Naturalis Historia (History of Nature) by Pliny the Elder (circa 23-79 AD), contemporary readers long assumed that creatures such as nereids and tritons actually existed. The sea was a vital part of Dutch daily life and culture, and images of ships, and all sorts of sea creatures were found on maps and emblem books of this period. Tile painters depicted fantastical creatures such as Nereids, tritons and mermaids, which were often depicted playing instruments or holding looking glasses. Another popular image found on prints and tiles was the horn-blowing mermaid, which may have functioned as the inspiration for this Delftware figure. Tile painters combined these strange and otherworldly scenes with natural forms that actually inhabited the sea, including sea turtles.

Classical mythology provided a new inspiration for artists in the sixteenth century, that spanned and still spans many centuries and art forms, such as Delftware.