Rijksmuseum Twenthe is located in the city of Enschede, in the east of the Netherlands. It was founded through the initiative of the textile baron Jan Bernard van Heek, who wished that his painting collection was housed in a new state museum in Enschede. Thanks to the persistence of his family the museum was built after his death and openend in 1930. Although the basis of the museum was formed by some 140 artworks, the collection was considerably expanded and has now about 8000 objects from the thirteenth century to the present day. Private benefactors have played an important role in this growth. In the 1960s the collections of paintings from the seventeenth and nineteenth century of textile manufacturers J.B. Scholten and M.G. van Heel were added to the museum collection. The Van Heel collection also contained a few hundred pieces of seventeenth and eighteenth-century Dutch Delftware.

The museum collection consists of several blue and white seventeenth-century Delft objects, such as vases, salt cellars, a ‘Persian blue’ jug and a pyramidal flower vase. The majority of the objects were produced in the eighteenth century, such as vases with the cashmere palette, Imari-style plates, trompe l’ceil tureens and many colorful figures and animals. An interesting object is this blue and white money box, which is dated May 15, 1743. Money banks rarely survive, because they were either shaken or broken to remove the contents. Since the banks were usually gifts on special occasions, some of them are dated. The decoration of this bank is a nice combination of both Western and Oriental influences. 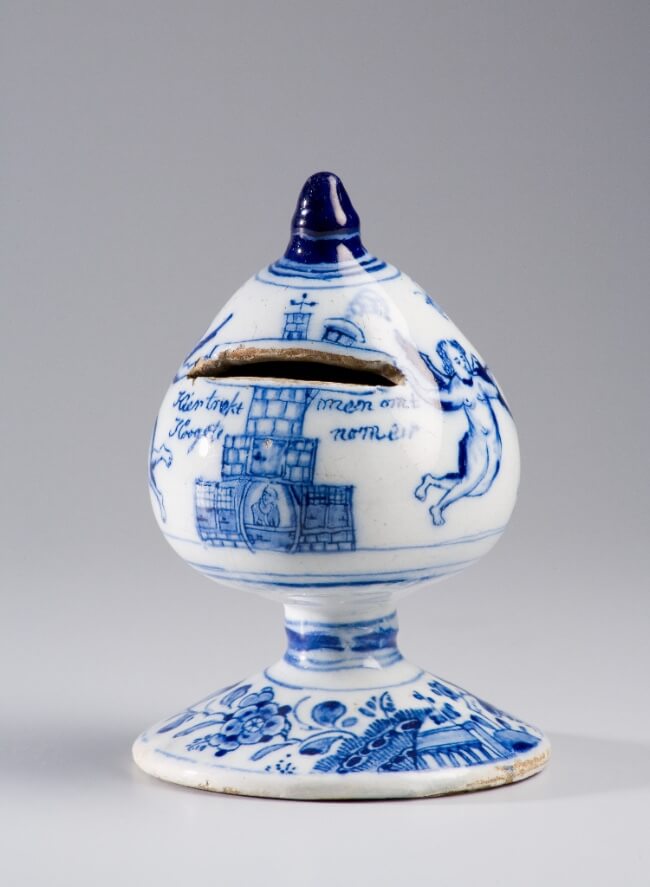