The outdoor museum Historic Deerfield, founded in 1952 in Deerfield, MA, U.S.A., interprets the history and culture of early New England and the Connecticut River Valley. Although the twelve authentic period houses, dating from 1730 to 1850, give a wonderful insight into regional furniture, silver, textiles and other decorative arts, most of the Delftware is on view in the Flynt Center of Early New England Life.

Although the initial interest of Henry and Helen Flynt, the founders of Historic Deerfield, involved the restoration and preservation of old houses, their attention soon turned to furnishing those interiors with suitable decorative arts from the eighteenth and nineteenth centuries. They enjoyed success acquiring locally made pieces of furniture, but locating ceramics with local histories of ownership proved more difficult. During the 1950s and 1960s, the Flynts amassed a large collection of English Delftware, and were especially attracted to colorful pieces of English and Dutch Delftware, many of which had historical significance. Eventually the Flynts hired professional staff who refined and augmented the collection through the addition of hundreds of objects.

Since ceramics were an essential part of domestic life in early New England, the Historic Deerfield houses a collection of several thousands objects. Although the emphasis lies on Chinese export porcelain, English ceramics and Whately pottery, also pieces of Dutch Delftware can be admired. From tobacco jars with the depiction of a pipe smoking Amerindian (symbolizing the Americas) and wares for the tea service such as a late seventeenth-century tea canister marked for Adrianus Kocx, to an early eighteenth-century pair of blue and white candlesticks marked PAK for Pieter Adriaensz. Kocx or his widow Johanna van der Heul. The decoration of outlined scrolls and floral reserves on these candlesticks is typical of the factory’s output in this time. As with many Delftware candlesticks, the little holes in the sides of the candle cups enabled the removal of melted stubs. The design of many Delftware candlesticks made it impossible to insert a fresh candle in the socket until the old stub had been extracted. The recovered piece would then be melted to reduce wasting expensive wax. 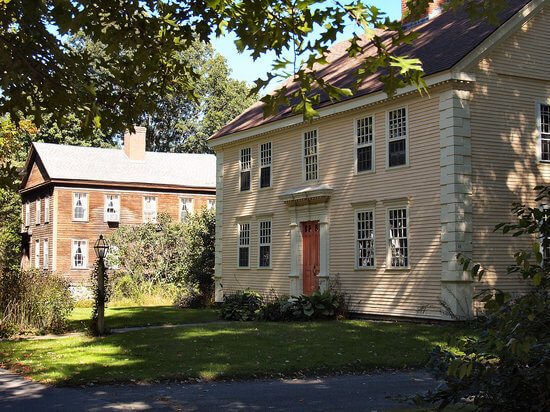