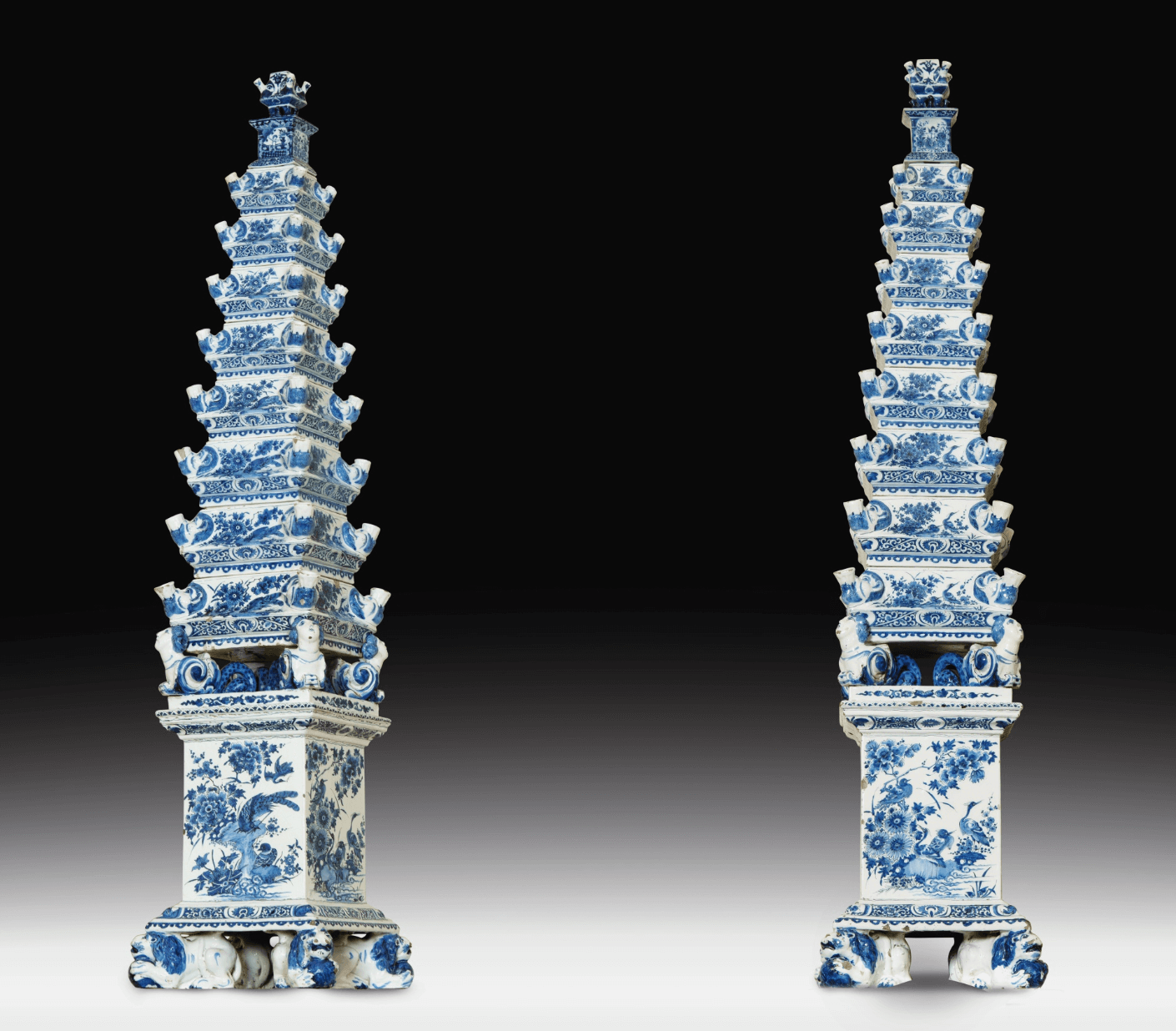 Wednesday evening December 11, 2019 will go into the Delftware history books. During the exciting evening in Paris, France, an exceptional pair of blue and white segmented flower pyramids from the late seventeenth century was sold from the collection of Count De Ribes for €1.069.000 or almost $1,2 million, exceeding their €150.000 – €250.000 estimate by several times. The pair hadn’t been on public view since an exhibition named Le Cabinet de l’Amateur organized by the friends of the Louvre Museum in Paris in 1956.

Although we understand it is a lot of money, it is actually a very good buy at this price. This is the most spectacular Delftware pair of flower pyramids to come to market in a long time. In 2016 Aronson Antiquairs presented a superb pair which was purchased by a private collector, but this pair transcends those in size and provenance. It is not only for the quality and size of the current works, it is for a large part also the pristine provenance that makes this pair truly one of the Delftware highlights. We congratulate the new owners with this pair as they can now almost literally and in an uninterrupted lineage shake hands with French King Louis XIV (1643-1715), making it highly likely that these vases went directly from the city of Delft to the French Royal Court at the end of the seventeenth century.

It was in the late seventeenth century, under the patronage of Queen Mary II, who was as passionate about Chinese blue and white porcelain and its local counterpart, Dutch Delftware, as she was about her gardens, that the Delft factories developed their technical skills and virtuosity in the production of all sorts of ’vases with spouts’ to display flowers. Inspired by Queen Mary, it also became fashionable in aristocratic circles to decorate their residences with vases full of flowers. For instance, large vases were used to decorate the fireplace in the summer, and smaller vases were placed on the table during a festive meal. Although the vases in the seventeenth and eighteenth centuries were filled with all varieties of cut flowers, there has been much misunderstanding about this. In the mid-nineteenth century, when collectors and art historians rediscovered Delft earthenware, they must have thought that the vases were intended to be filled with hyacinth bulbs or flowers, as they came to be known as ‘bouquetiers à Jacinthes’. Not long thereafter, however, a more familiar name came into fashion, which is still used today: ‘tulip vase’ or ‘tulipière’, ascribed to these vases on the revised supposition that they were intended specifically to hold the precious and popular tulips. 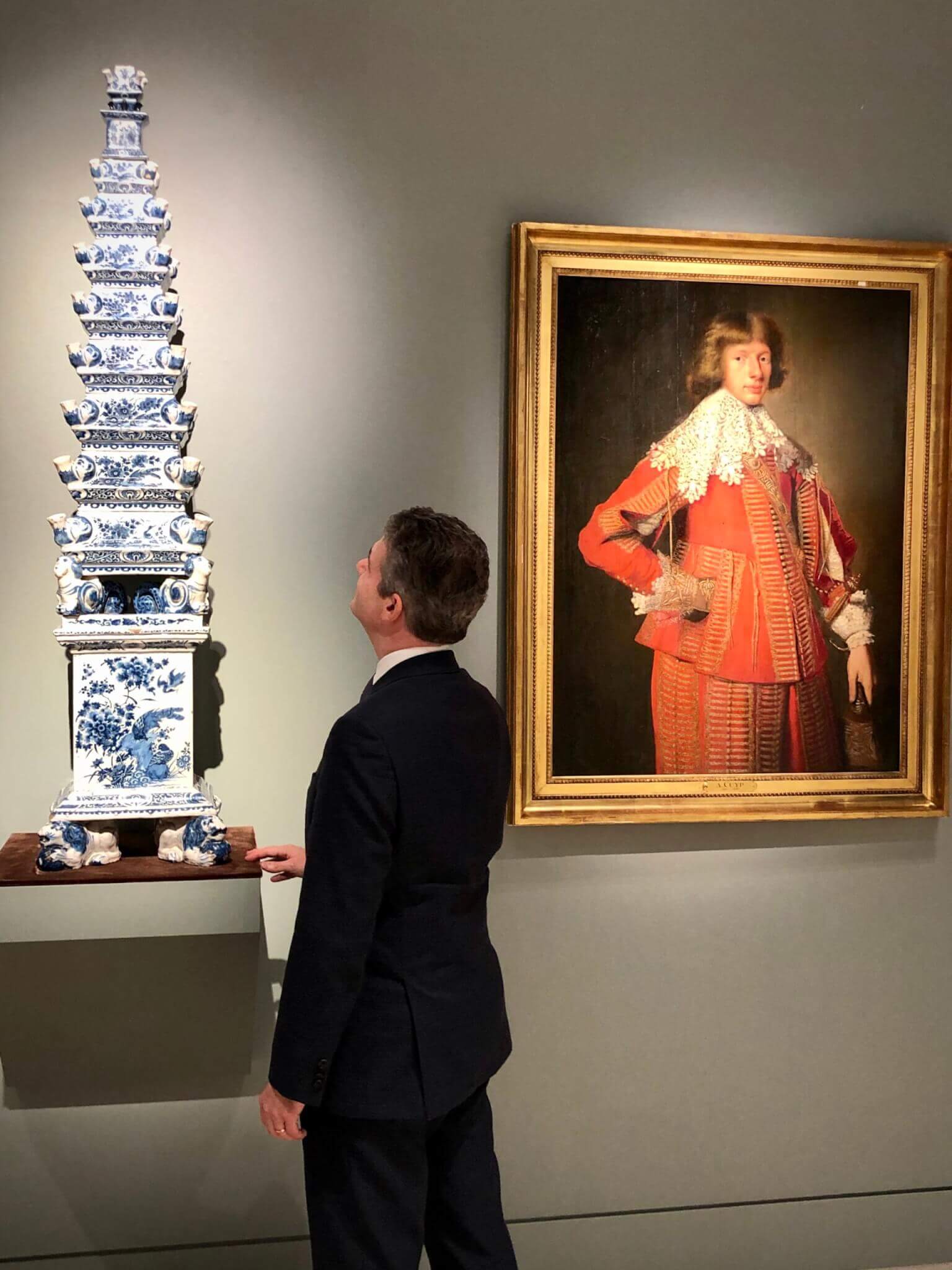 Around the year 1700 there were over thirty potteries in operation in Delft, of which at least five produced vases with holes and spouts, as their makers’ marks indicate. Among them, De Grieksche A (The Greek A) factory had been producing flower vases as early as circa 1680, although these early examples were more modest in size than those made for King William III and Queen Mary one and two decades later. De Grieksche A, together with De Metaale Pot (The Metal Pot) factory, created the largest output of flower vases, and over a period of sixty years, from 1680to 1740, they sold a multitude of different types of vases with spouts and holes. But in this production, they were joined by Het Jonge Moriaanshooft (The Young Moor’s Head), De Drie Posteleyne Astonne (The Three Porcelain Ash Barrels) and De Witte Ster (The White Star) factories, which during this period also made outstanding flower vases.

In their constant search for innovation and for expansion of their range, around 1680 the Delft potters began to develop new forms of vases. The most common types were table vases in the form of tureens and baskets, or stacks of round basins. But far rarer and more extravagant were the so-called ‘flower pyramids’, or as they were called in the seventeenth century, ‘flowerpots with pipes’. These monumental obelisk-shaped vases, which consisted of four or more spouted spheres of decreasing size stacked on top of one another, were predominantly made for the Dutch and English courts of King William III and Queen Mary II. 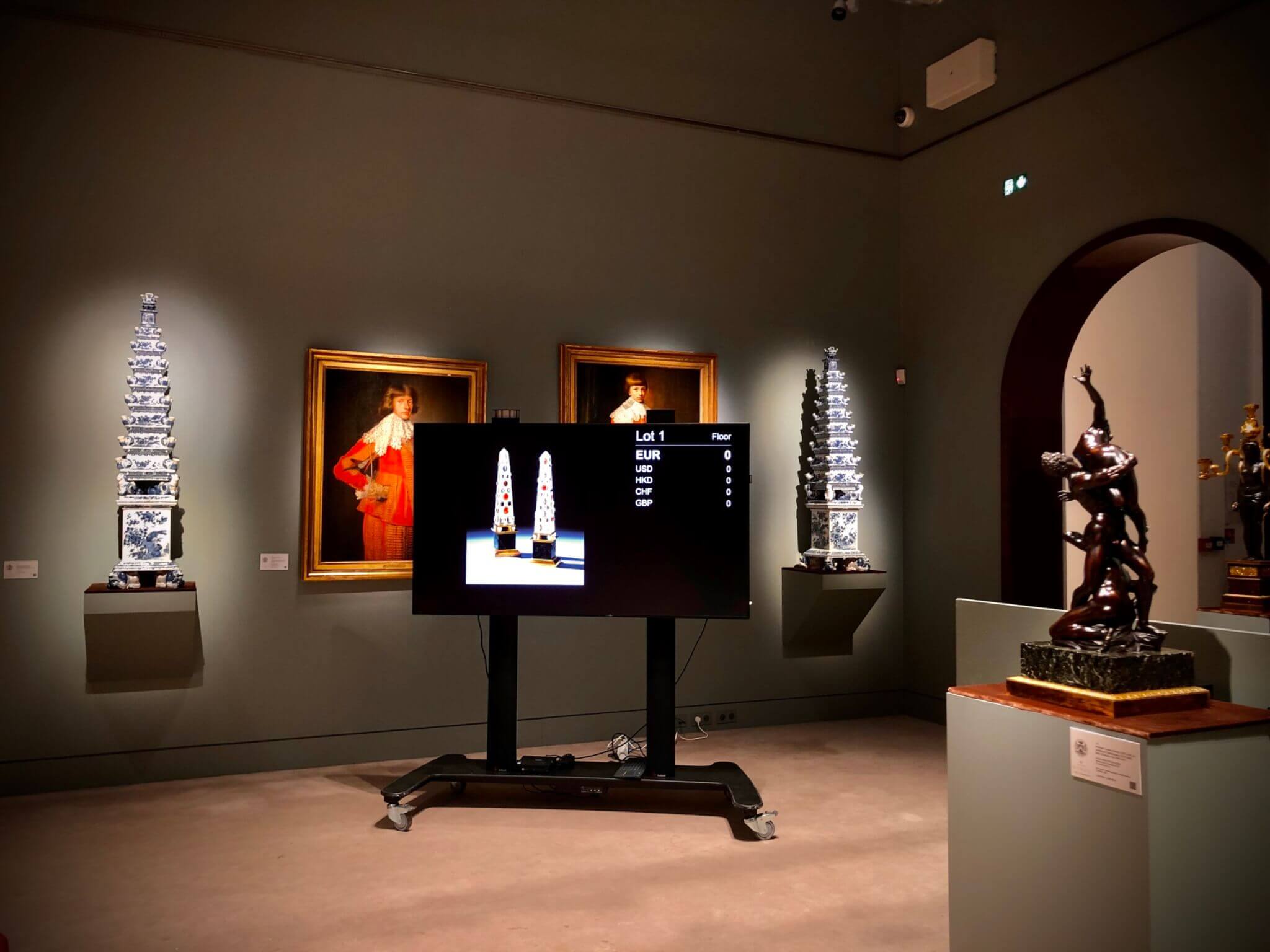 These tiered pyramidal vases grew ever taller and more complex in shape over the years, with the Ribes pair measuring 153 cm. (60 1/4 in.) high in its current condition as one of the largest vases to date. The base for the pyramid is formed by a classical square pedestal, standing on complete lions. The main scene painted on the pedestals of this pair of flower vases depicts a typical chinoiserie style of birds, rock work and flowers. The transition between the pedestal and the pyramid-shaped section is formed by volutes with sphinxes. The repetition of the square tiers required the artist to repeat the same patterns and decorations, but to make them smaller and smaller towards the top. At all of the corners grotesque heads molded in relief issue spouts from their gaping jaws. The spouts were placed toward the bottom of each tier so that the flower stems could touch the water in the tier, which itself formed a small reservoir. The tower of these vases usually is surmounted by an obelisk tapering to a sharp point and terminating in a shaped finial. Occasionally, the tower is surmounted by a bust of Queen Mary, as in the majestic pair of pyramids in the Rijksmuseum, Amsterdam (BK- 2004-4-A, B, ill. 13) or Victoria & Albert Museum, London (C.96-1981, C.19-1982), or with a crown, as in Musées Royaux d’Art et d’Histoire in Brussels (inv. no. Ev. 354). The Ribes pair lacks however a few tiers and its original tops, which are currently replaced by an eighteenth-century Chinese porcelain finial. But based on its similarity in model and size to the pair in the Rijksmuseum and the Victoria & Albert Museum, it is highly probable that the Ribes pair was initially also surmounted by a bust of Queen Mary. 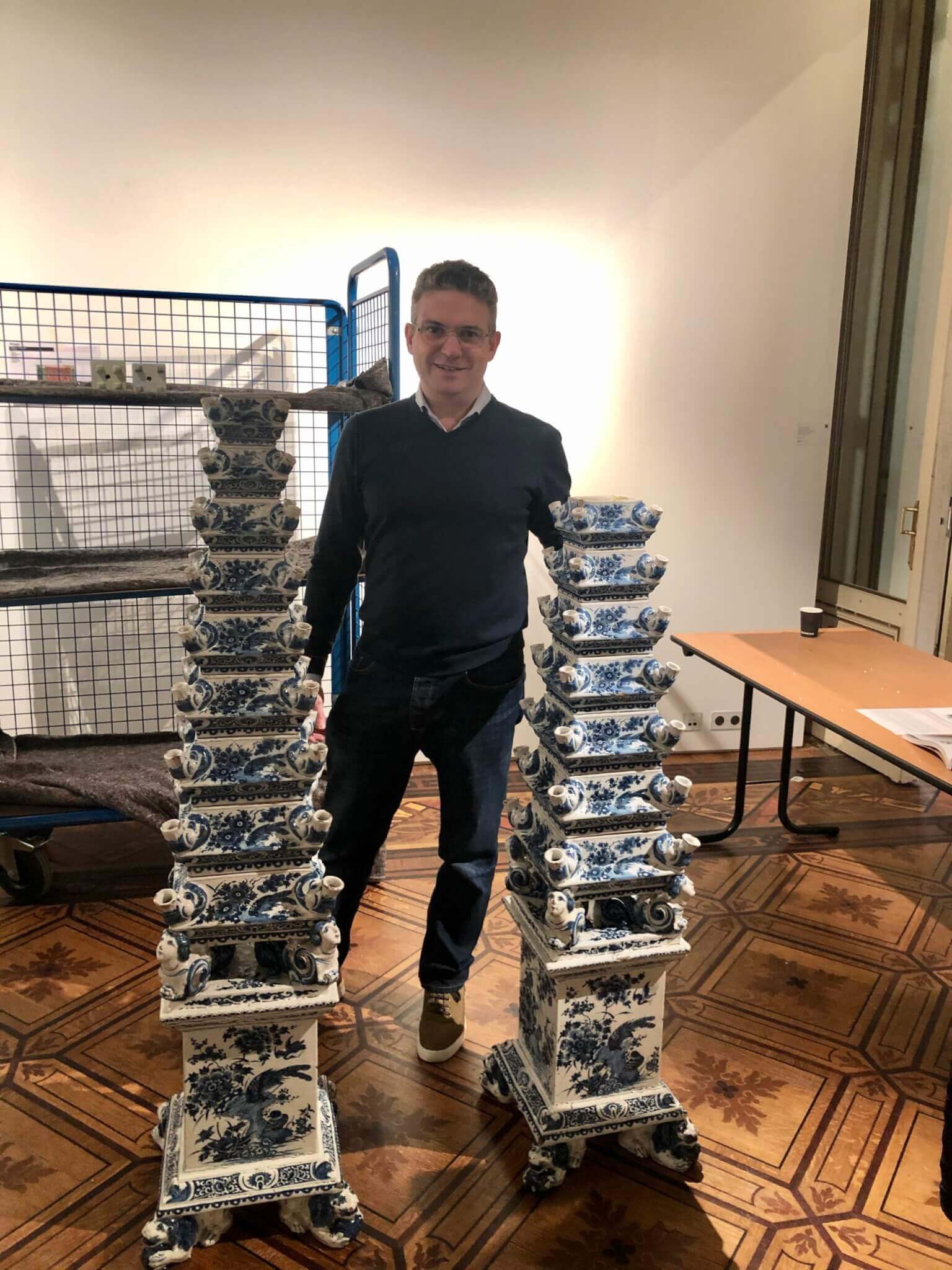 Moreover, the flower pyramids’ outstanding provenance makes it even more probable that busts of Queen Mary adorned the vases. The pair of pyramids has been in the Ribes collection for over a century, when Charles-Aimé-Auguste, 4th Count de Ribes (1858-1917) married Marie-Denise-Henriette du Puget (1872-1957). Although the Ribes family had strong ties to the French monarchy dating back to the eighteenth century, the pair of Delftware flower pyramids come, by repute, from the collection of Edme Antoine, 1st Count du Puget (1742-1801). The du Puget family, which were always very close to the monarchy, has its roots in the late ninth century and the large volume of armorial bearings compiled by Charles René d’Hozier (1640-1732), indicates several eminent members including, Claude du Puget, Squire during the fifteenth century. His grandson, Lord des Brulais was appointed Archer des Ordonnances du Roi and includes amongst his descendants many officers for the House of the King, and the initiation of more than twenty Order of Malta Knights in 1506, with Béranguier du Puget nominated in Rhodes. Other renowned Order of Malta members were Boniface du Puget, the Grand Commander of the Order, Captain of the Papal war galley at the Battle of Lepanto in 1571, and Antoine du Puget, the Grand Master of the Artillery, and Protector of the Capital war galley of the Order. The Order of St. Louis was a Royal and honorary military order created in 1693 by Louis XIV and bestowed on several members of the du Puget family including Étienne du Puget as Artillery Commander, his nephew Edme Antoine as Major General, and Edme’s son Auguste as Captain of the Infantry.