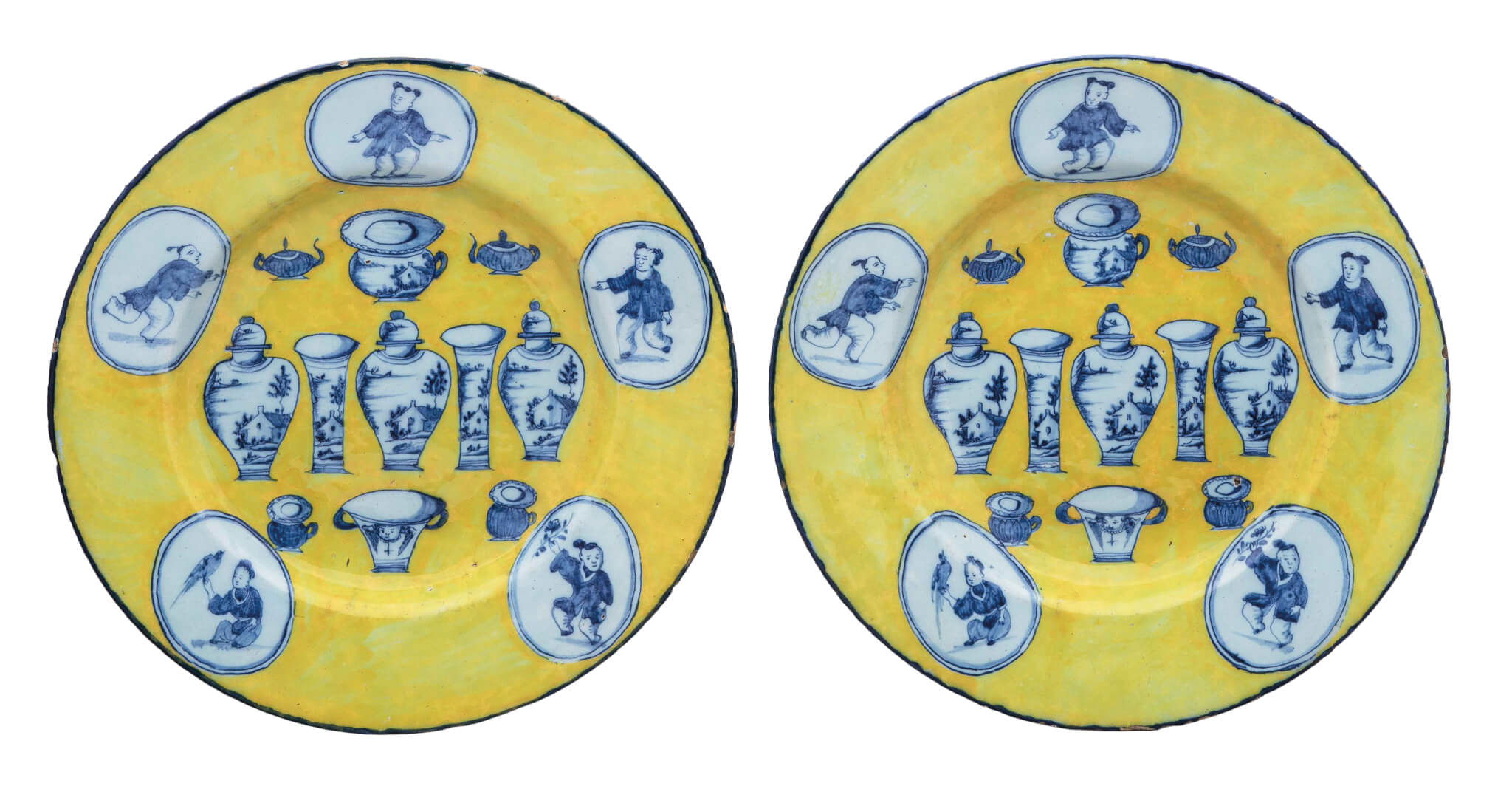 The function of plates and plaques painted in a yellow ground and decorated with garnitures, cuspidors, teapots and other ceramic objects arranged in several rows is uncertain. The rare objects have probably functioned as sample plates, although there are no archival records to support this assumption. Sample plates may have been used by potteries to advertise their inventory and show the skill of the factory’s potters and painters. They were also possibly inspired by Chinese porcelain from the Kangxi period. Only six identical plates, including the present pair, have been identified to this date. Besides the present pair, there are two single plates that are in private collections, and only one other pair, which is in the collection of the Museum of Fine Arts in Boston. 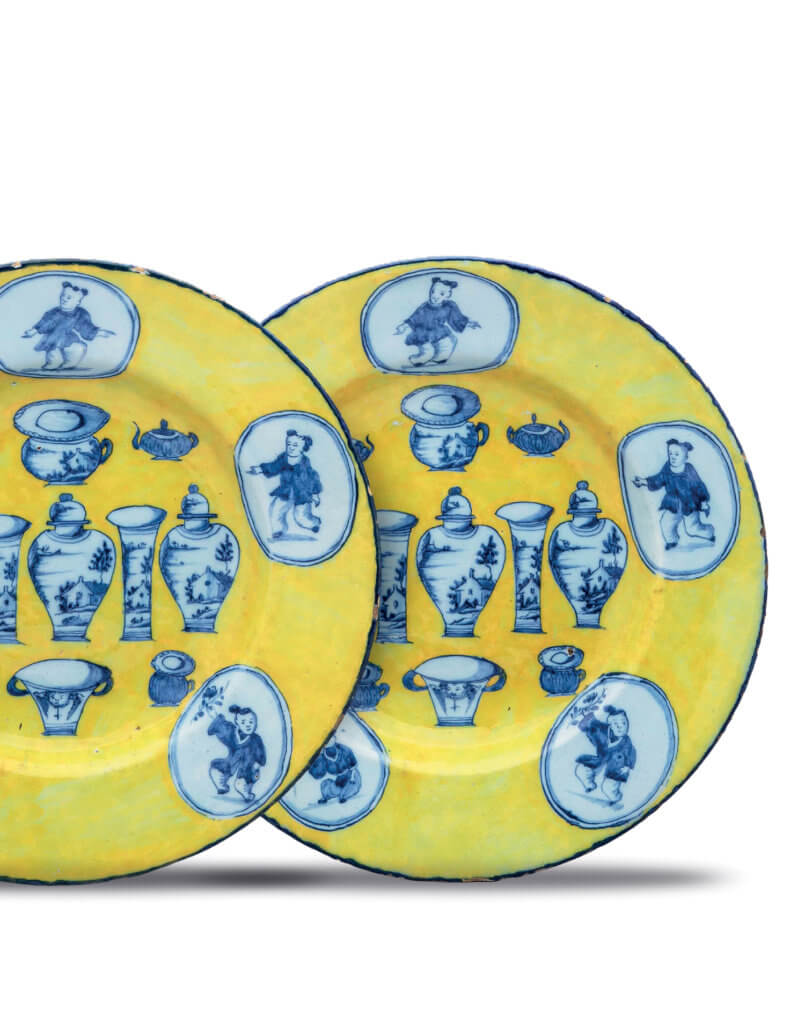 Dutch painters may have been inspired by the decoration of loose objects on Kangxi porcelain, such as the “Hundred Antiquities,” the “Eight Precious Objects” or “Treasures.” These names refer to a collection of vases, boxes, tables, brush-holders and teapots arranged according to the whim of the painter. This particular design was one of the most widespread designs in the second quarter of the eighteenth century used by various European factories (Rouen and Sinceny especially).[1] While the Delft painters must have known of these Kangxi plates, the differences are apparent in the arrangement of the objects by comparing the Chinese plates and the Delftware plates. Where the Delft objects are arranged in several rows, the objects on the Chinese porcelain plates seem to be randomly placed over the entire plate. Also the degree of realism in which the objects are painted on the Delft plates contrasts with the stylized objects on the Kangxi plates. This striking difference supports the assumption that the plates were used as sample plates.

These types of plates that were executed in the costly bright yellow glaze demonstrated the skill of the factory. As can be read in Gerrit Paape’s treatise ‘De Plateelbakker of Delftsch Aardewerkmaaker’ of 1794 the Delft painters used two types of yellow. One recipe contains: “Negen ponden Antimonie, zeven ponden Goudglette, een en een half pond Tinäsch, en een en een half pond Zout” (Nine pounds of antimony, seven pounds of gold litharge, one and a half pound of tin oxide, and one and a half pound of salt). The other recipe contains “Tien ponden Antimonie, zes ponden Goudglette, twee ponden Lootäsch, and three ponden Zout” (ten pounds of antimony, six pounds of gold litharge, two pounds of lead oxide and three pounds salt).[2]

The yellow glaze was difficult to produce due to the ingredients, which were highly poisonous, and also due to the firing technique. The glaze would easily burn if the temperature in the kiln was just slightly off. Paape describes that the composition was laid in small bits on rough saucers and then baked, but, to avoid the pigment sticking to the saucer, the saucers were first covered with ashes and fired on the crown. Sometimes it had to be fired twice or even three times in order to have a good, bright yellow as result.[3]

The dishes are unmarked, however, similar plates have been attributed to De Grieksche A (The Greek A) factory based on a marked plaque in the collection of the Gemeentemuseum, The Hague (inv. no. OC(D)245-1904). Based on the stylistic similarities between the plaque and the plates, it is probable that the dishes were made at the same factory. However, if these objects indeed functioned as an example of the factory’s skills and inventory, it is slightly illogical that they were only produced at De Grieksche A factory.