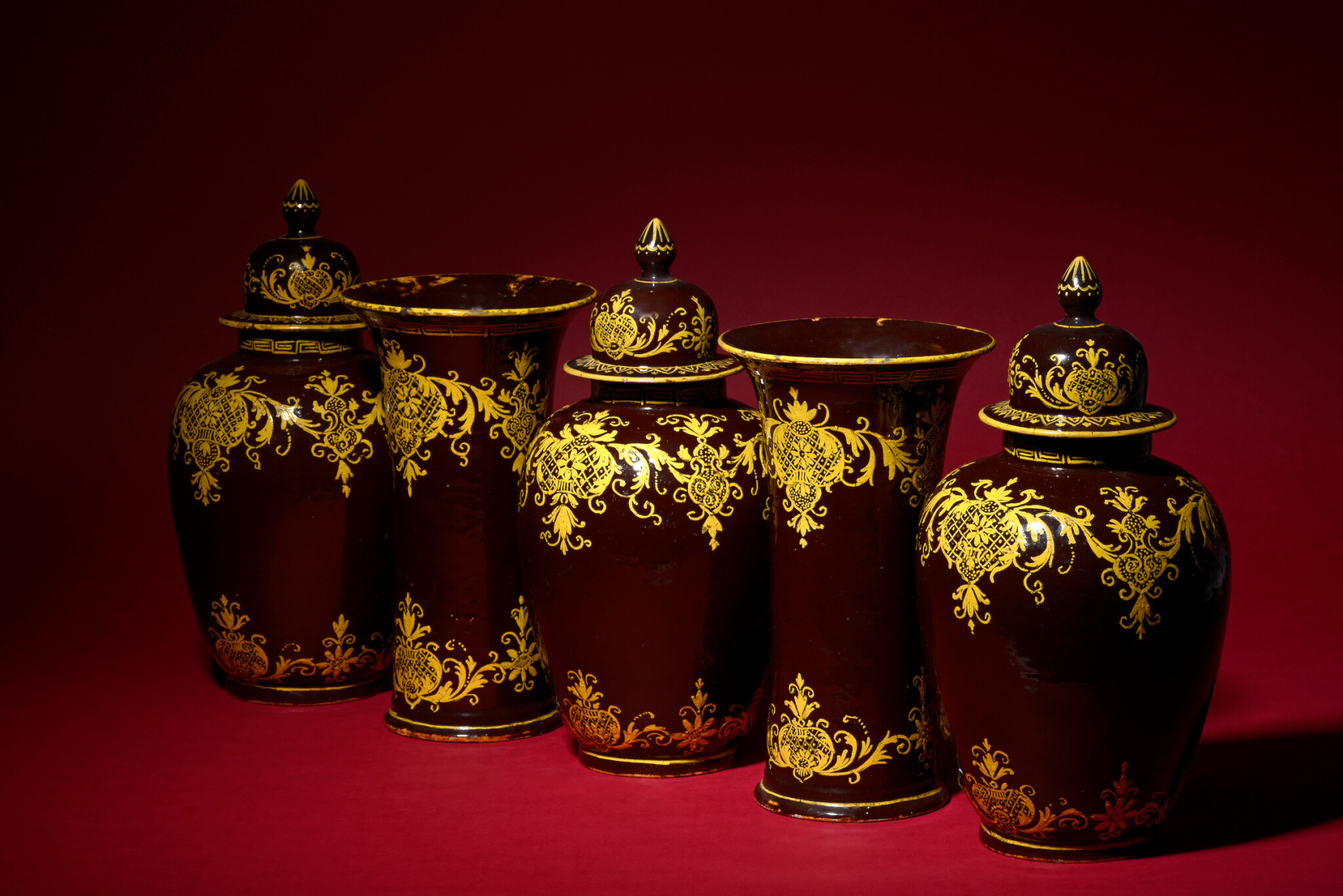 Porcelain, lacquer and silk are among the most sought after exotic goods from China and Japan in far-away Europe. The attraction to these precious items was particularly strong among the courts during the era when trade flourished by land via the Silk Road or by sea.[1]

Early in the seventeenth century, the Dutch East India Company (VOC) introduced Japanese lacquerwork to The Netherlands and Europe, much as it had done with Chinese porcelain. In doing so, the VOC created commercial opportunities the Portuguese had neglected. When the Dutch arrived in Japan in 1600 and established commercial relations with the Japanese in the following years, they recognized the high quality of Japanese lacquer and its scarcity in Northern Europe. Dutch buyers were keenly interested in oriental curiosities, and Company merchants predicted that Japanese lacquer could become a profitable item. However, unlike oriental porcelain, Japanese lacquer was too expensive and thus never became a common element of Dutch material culture.[2]

Although expensive, the Japanese lacquerware purchased by the VOC ignited great curiosity and inspiration. The late seventeenth century European vogue for lacquer coincided with the taste for tromp l’ceil effects. European designers imitated lacquer in a variety of ways and materials, such as wood, metal and earthenware. Also in the city of Delft, potters were inspired by these exotic lacquer-wares and started experimenting with different colors of glazes.

From the 1680s onward, the introduction of the highly desirable but expensive Japanese Kakiemon and Imari porcelain ignited interest in the development of colors such as brown and black.[3]  Since around 1690 it had become increasingly difficult for the VOC to obtain high-quality, affordable oriental lacquerware. As a result, the trade declined. Despite this problem, the household inventories show that wealthy, fashion-conscious townspeople were keen to imitate the court and surround themselves with such exotic objects.[4]

Around 1700, designers also used the gold-decorated Kangxi porcelain, later known as mirror black as another source of inspiration for brown and black Delft. These objects in the form of covered jars and plates began to be imported into Europe at this time, at the same time as the introduction of Famille noire porcelain on the market. New styles of porcelain tea wares and bowls with partial black decoration must have increased the public’s fascination with the color.[5]

The Delftware potters developed an interest in creating cheaper brown and black objects after the shrinking imports of oriental lacquerware around 1690 and the presence of expensive Chinese black porcelain wares on the market.[6]  Again, the Delft potteries responded by looking for ways to imitate a luxury product in short supply, as they had done earlier with the other oriental porcelain wares. Delft potters were familiar with the production of faience objects, and they increasingly had satisfactory results with polychrome and gilt decoration. Therefore, it is hardly surprising that objects, which were usually marketed in Delft on a white ground, also began to be produced, albeit in very small quantities, with a shiny brown or black ground with golden yellow or polychrome chinoiserie decoration.[7]

The production of small quantities is shown by the fact that only about 65 piece of ‘Black Delft’ are known. In fact, brown-glazed Delft is even more rare than ‘Black Delft’. The largest assemblage of ‘Brown Delft’ is in the Evenepoël Collection at the Musées royaux d’Art et d’Histoire, Brussels. In contrast to its extraordinary holdings of 27 pieces of ‘Black Delft’, the museum has only 16 pieces of ‘Brown Delft’. Black Delft was not, of course, produced as utility wares. With its striking and elegant chinoiserie decoration, it was always designed for display, such as this garniture.[8] This garniture is marked CK, probably for Cornelis van der Kloot, a master painter who transferred in 1697 from De Dissel (The Pole) factory to De Metaale Pot (The Metal Pot) factory, then owned by Lambertus van Eenhoorn.[8] It is no coincidence that by employing the most highly skilled artisans, De Metaale Pot was the most successful factory producing Delftware at that time, exceeding even its significant competitors: De Drie Postelyene Astonne (The Three Porcelain Ash-Barrels), De Paauw (The Peacock) and De Grieksche A (The Greek A) factories. The high quality of the present garniture, together with the fact that Cornelis van der Kloot worked among the most talented specialists at the turn of the seventeenth to the eighteenth century, leads to the reasonable conclusion that he was the maker of these rare vases.

[8] The CK mark has been discussed throughout the years by various scholars; Havard 1909, vol. II, pp. 114- 115 attributed it to Cornelis Aelbregtsz. (de) Keyzer (1668-1680), while De Jonge 1947, p. 222 mentions De Keyzer as working for De Twee Scheepjes (The Two Little Ships) factory, but attributes the CK mark to Cornelis Koppens, the owner of De Metaale Pot (The Metal Pot) factory from 1724 to 1761 (ibid., p. 219). It seems most likely, however, that this brown-ground garniture can be attributed to Cornelis van der Kloot, a master painter, who, according to De Jonge 1969, p. 94, transferred in 1697 from De Dissel (The Pole) factory to De Metaale Pot, then owned by Lambertus van Eenhoorn.