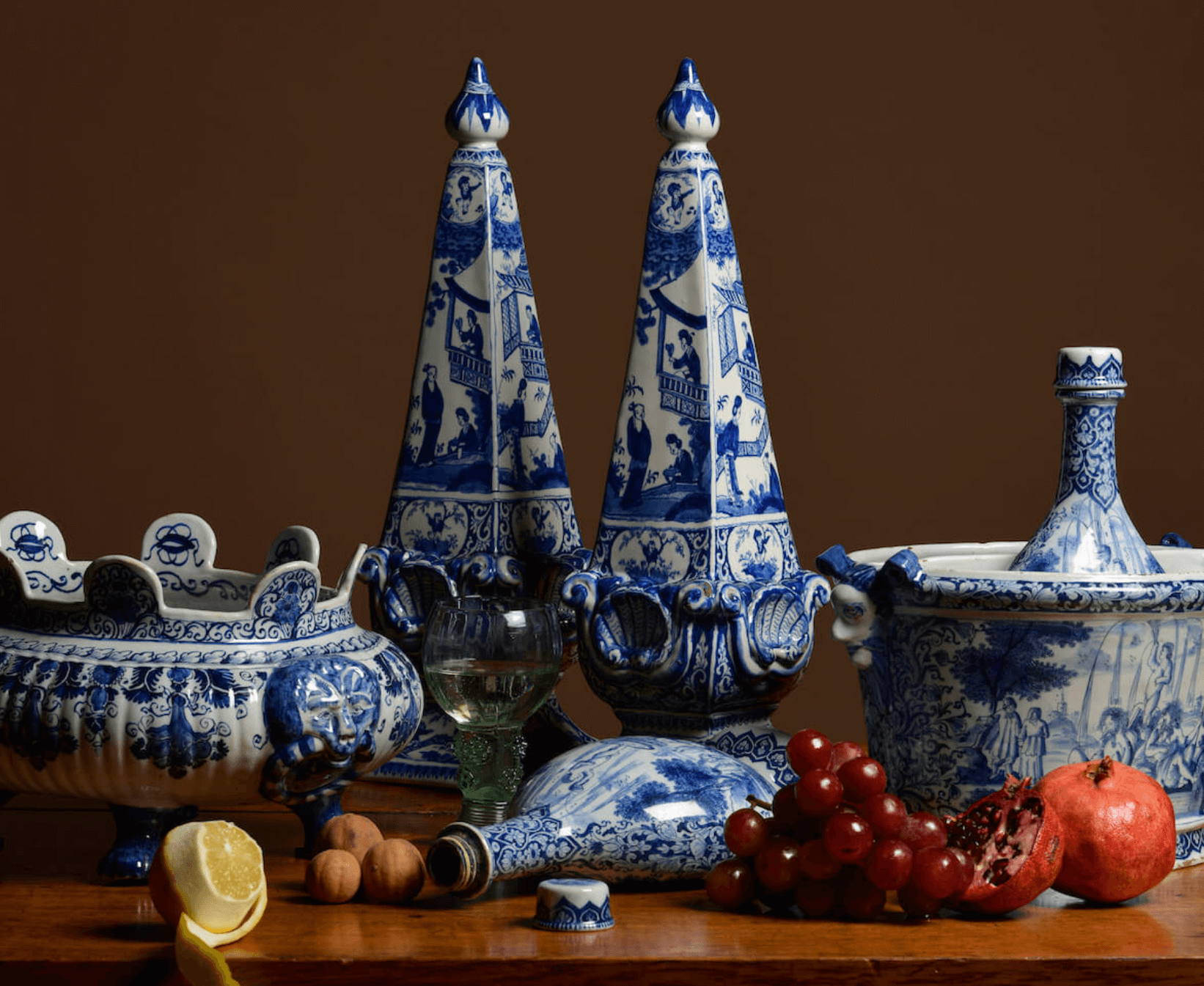 In the Netherlands and throughout Europe, people drank alcoholic beverages when water was unsafe. Cold beverages were consumed in the summer, and hot punch, wine and beer were drank to keep warm in the winter.[1] In Northern Europe, the consumption of wine carried a strong social distinction, whereas beer was a more common beverage. Although grapes were known to have grown in the Netherlands since antiquity, the majority of wine that was consumed in the Netherlands was imported from France, Germany, Spain and Portugal. These imported wines were typically new wines because of the difficulty to preserve the luxurious beverage. Strong, aged wines were reserved for special occasions. 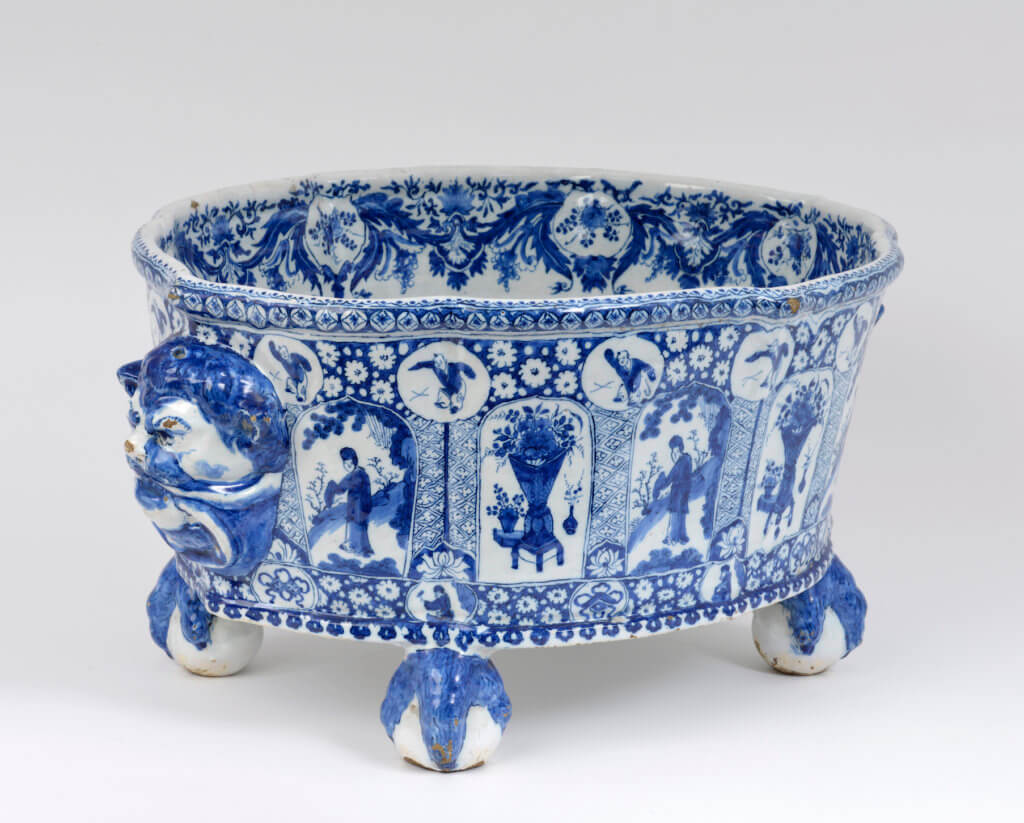 The design of Dutch dining rooms and furniture complemented the social ritual of alcohol consumption. A typical feature of Dutch dining rooms was the built-in buffet, which was outfitted with ‘running’ water from an invisible reservoir. The buffet accommodated a fountain, monteiths, bottles of wine, and shelves for glass and silverware. If a home did not have a built-in buffet, serving tables or separate buffet furniture was utilized. In the first half of the eighteenth century, buffets consisted of an open base with shelves. By the second half of that century, the individual buffet evolved into a chest of drawers that transformed into a buffet after the top and sides were folded open.[2]

The buffet served a dual function: not only was it used in the elaborate service of wine, but it also demonstrated one’s wealth by displaying beautiful ornamental objects. Practical, but also decorative objects for the buffet were produced in the city of Delft. For example, this large blue and white wine cooler from circa 1690, which was made under the ownership of Adrianus Kocx at De Grieksche A (The Greek A) factory, must have been an eye-catching object near the buffet. It was undoubtedly part of an exceptional service with similarly decorated objects, such as a monteith, ewers and plates.

The buffets also played an essential role in the numerous rituals of dining: the exchange of glasses, plates, napkins and any cutlery; the refilling of the dishes; the pre-cutting of large pieces of meat; and, when the soup tureen is no longer on the table, the pouring of the soup. In the eighteenth century the drinking glasses were frequently rinsed in water and freshly poured again at the buffet. Often, the glasses were chilled in a monteith, such as the present blue and white Delft pair from circa 1730, made during the ownership of Cornelis Koppens of De Metaale Pot (The Metal Pot) factory. Wine glass coolers like these were filled with ice or cold water, and the glasses were suspended upside down with their bowl in the cooler and their feet supported by the scalloped rim.

The main activity of the servant at the buffet was the issue of drinks. When it was an important family in livery, the servants walked between the table and buffet to provide the guests with drinks at the right time. That right moment was, for example, just before a toast. When drinking frequently on the health of people both present and absent, a sufficient amount of alcohol was probably already consumed before the entire dinner.[3] However, a relatively small glass was customary in the eighteenth century for this frequent toasting and drinking from constantly refilled glasses. Servants poured the wine on a large serving tray on a buffet and brought the glasses to the guests on a small, sometimes silver, platter.[4] Although it was common that the wine was served to guests, the Swedish author in his travelogue De Hollandsche Waereld from 1733 stated the contrary in his experience of Dutch dining culture. He wrote that the bottle of wine was put on the table, so that the guests could serve themselves at their own pleasure.[5] 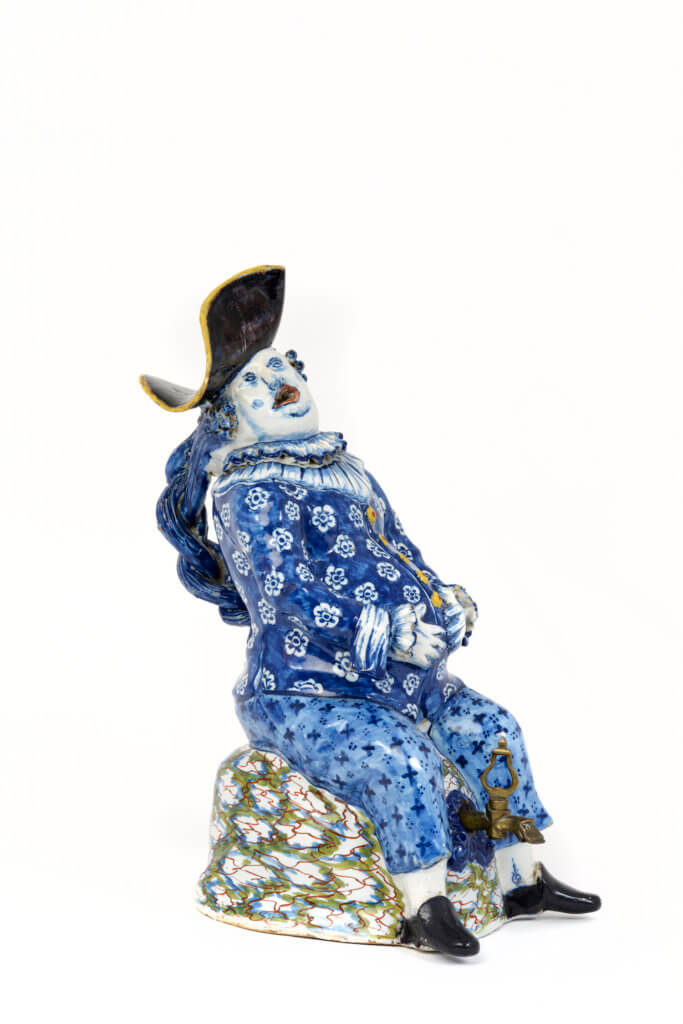 The Delft potteries quickly accommodated the new tastes of the nobility and the wealthy bourgeoisie for serving their drinks with the production of large decorative objects for the buffet, as well as wine and liquor cisterns. Cisterns were akin to large tankards or small pitchers with a low spout for easy tabletop dispensing of its contents, typically liquor.[6] Delft potters transformed a very utilitarian object into a delightful work of art with a number of variations, from figural groups to mischievous monkeys, that further illustrates the versatility of Delftware designers. For example, this polychrome figural cistern from 1760 depicts a man seated on a rock. These cisterns of various male and female models are referred to in Dutch as ‘Bobbejakken’, whereas their French derivatives are called ‘pots-Jacquot’ or ‘pots-Jacqueline’, and the English variations are called ʻToby jugsʼ.[7] Some of the Dutch Delft examples may be based on eighteenth- or nineteenth-century penny prints of the type depicting ‘Trijn en Hans Altijddorstʼ (ʻTrijn and Hans Always-thirstyʼ).[8] As in the case of the present cistern the head would function as a stopper, like a cork in a bottle and could also be filled through a hole in his hat. 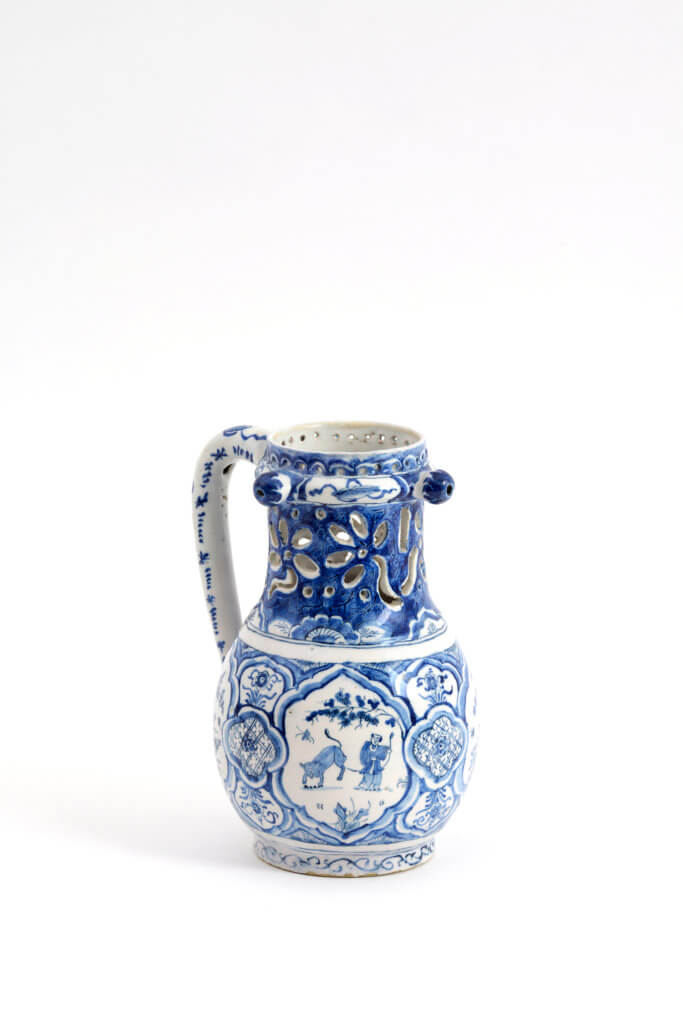 Of course, the puzzle jug was also part of the assortment of the Delft factories. Filled with wine or beer, the jug was used as a game or a conversation piece. To consume the contents of the jug was increasingly challenging, especially after a long and alcohol-induced evening. As can be seen in the present blue and white chinoiserie puzzle jug, which is dated 1737, the pierced openwork on the neck of the jug intentionally prevented any liquid in the body from being poured or consumed, and provided rounds of hilarity when the uninitiated attempted to drink from the vessel. Additional holes that were cleverly concealed made the challenge even more confounding. Although models from other countries are very uncommon, Dutch puzzle jugs are particularly rare. Delft examples can be found dating from the 1650s onward through the eighteenth century. Interestingly, the present puzzle jug is a mix of Oriental and Western influences: the Chinese man holding a tiger-like creature on a leash and the decoration of beribboned Chinese symbols on the handles; and the Western-influenced design of ships sailing on the sea and the shape of the object. At the height of their popularity, Chinese potters from the Kangxi period (1662 – 1722) were inspired to produce export blue and white porcelain puzzle jugs. These examples were clearly special commissions that were intended for Dutch clients.

All these Delftware objects made for the service of drinking alcohol were vulnerable in use and even more so in maintenance. Most have probably been lost over time, making these objects even more uncommon. However, it is highly probable that these objects only served a decorative purpose, and were possibly only used at special occasions. Filled with beer, wine, or perhaps something stronger, they would have served as the centerpiece of a festive gathering.[9]

[7] The name ‘Toby jug’ possibly derived from the jovially intoxicated Sir Toby Belch in William Shakespeareʼs play, Twelfth Night, but more likely from the notorious eighteenth-century Yorkshire toper, Henry Elwes, who was known as ʻToby Fillpotʼ (or Philpot), and who inspired a popular English drinking song, ʻThe Brown Jugʼ, as well as a print published in 1761 by Carver and Bowles, London, which paid tribute to the then-infamous “Toby Fillpotˮ.