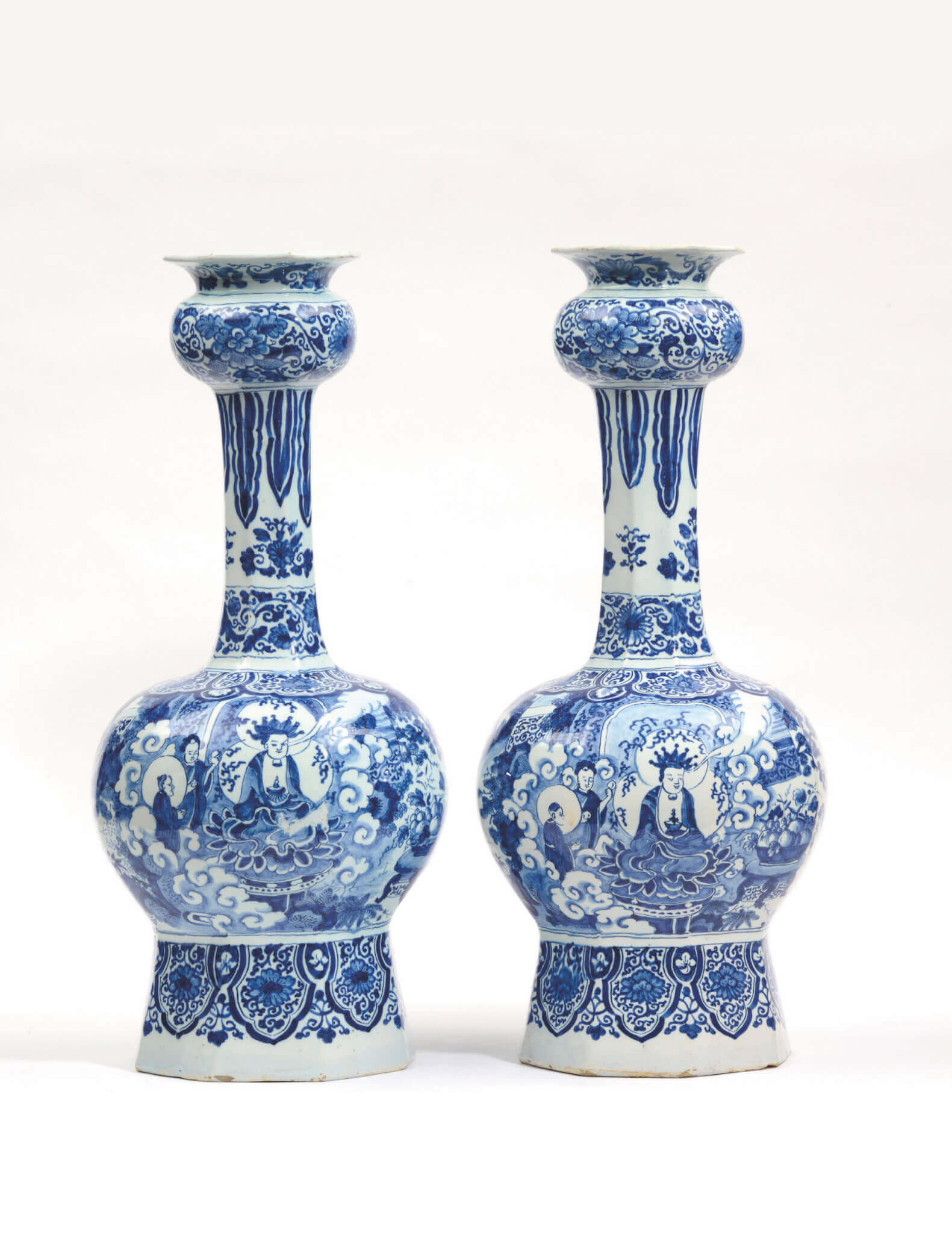 Soon after the introduction of expensive Chinese porcelain in the Netherlands, a demand arose for an attractive and affordable alternative. During the third quarter of the seventeenth century, Delft potters were able to expand the production of very refined faience for the higher end of the market after the limited importation of Asian porcelain by the VOC due to the Chinese civil war (1644-1647). In order to compete with Chinese porcelain, it was vital that the potters not only created pieces with a similar outward appearance, but that they also faithfully copied both the exotic shapes and the decoration of the successive Chinese stylistic periods.

The Delft potters produced three types of Asian decoration. The first style was the direct imitation of Chinese porcelain, for which the consecutive styles of export porcelain were followed. From Kraak porcelain, to Transitional porcelain and that of Kangxi porcelain.1 For example, this Delft Kraak-style charger is probably inspired by a Chinese porcelain example. Kraak-style decoration enjoyed great popularity in the Netherlands, even after a larger variety of Kangxi porcelain became available at the end of the seventeenth century. Often, the chargers are painted within a hexagon or octagon with a river landscape, where large blossoming plants rise alongside the banks and little birds, ducks or peacocks strut. The border is always divided in alternating wide and narrow panels decorated with flowers and Daoist or Buddhist motifs or emblems of fortune. The Delft potters would often deviate from the Oriental motifs, as in the present dish where the blue color has a dark-blue, black or purple outline. The draftsmanship on Kraak-style chargers varies and determines the character and quality of the chargers.

This so-called Delft ‘Milk and Blood’ charger was also directly inspired by a Chinese porcelain plate. The decoration shows a Chinese man and his attendant holding an umbrella and walking towards a female figure wearing flowing robes and holding a child. The cavetto and rim are decorated with large panels of flowering plants and a flitting insect. This type of porcelain was popular mainly among the Dutch, and the very few pieces that can be found elsewhere in Europe usually come from the Netherlands. The composition and iconography conform to the normal export assortment of blue and white Kangxi porcelain of circa 1700. Within the wide range of East Asian porcelain color varieties, this type of decoration had only a small production. In contrast to the Chinese Milk and Blood porcelain wares, Delftware objects painted with a similar style of decoration in iron-red and gold are extremely rare.

In addition to these more or less direct imitations of Chinese porcelain, Delft potters also exercised personal interpretations, known as chinoiserie. The style originated in the seventeenth century and quickly became a dominant fashion throughout Europe, enduring through the first half of the eighteenth century.2 Chinoiserie designs feature figures, landscapes, architecture and attributes that are loosely rendered in a Chinese style and combined with European style elements.3 The faience painter typically chose elements that were deemed the most characteristic of the exotic Far East. However faithful the reproduction, the Delftware painter was unaware of the original Chinese meaning.

Kangxi style motifs that were often incorporated on Delftware objects were Long Elizas (Lange Lijs) and Zotjes (dancing boys). These motifs were reproduced on Asian-shaped objects, such as vases, plates, pots and other shapes, but also on European-shaped objects, such as this large wine cooler. Produced at the end of the seventeenth century, probably at De Grieksche A (The Greek A) factory during the ownership of Adrianus Kocx, the decoration shows dancing boys, Long Elizas, lotus flowers and Daoist or Buddhist motifs alternated by chinoiserie figures. The function and shape of this object, however, is completely European. The lion masks clasping an integral ring in their mouth, the ball and claw feet and the foliate scrollwork were common motifs seen on the most remarkable objects produced under Adrianus Kocx. Many of the objects produced under his ownership are also decorated with lambrequins, as can be seen on the interior of this large wine cooler. In France, the motif was used by Jean Berain (1640-1711), designer for the court of King Louis XIV.4 Berain’s style was characterized by delicate arabesques and whimsical grotesques that originally derived from the Renaissance. Using light floral patterns, Berain famously combined foliage with human and animal forms that prefigured the Rococo movement.5 His style was first adopted by the maiolica potteries from Rouen, where the use of lambrequins evolved toward an extreme refinement. The French designer Daniel Marot later exported Berain’s style to the Netherlands, when he was employed by William III and Mary II to redesign the Palace Het Loo after the revocation of the Edict of Nantes by Louis XIV.

These two Delftware salt cellars from circa 1690 also show the seamless incorporation of Asian stylistic references into European-shaped objects. As with the above mentioned wine cooler, the juxtaposition of these stylistic traits characterize the period of Adrianus Kocx’ ownership. Although modeled after a silver example, the present salt cellars are decorated in a chinoiserie style with figures in a landscape of pierced rock work and pine trees, which the painter has subordinated to its shape. The pseudo-Chinese characters in the decoration are particularly striking.

Although Chinese porcelain offered the most obvious source of inspiration for Delftware, painters also referenced graphic sources in the last quarter of the seventeenth century to fill in continuous scenes from Transitional porcelain.6 Prints and drawings could easily be transferred onto the unfired glaze using a stencil; a paper with holes pricked through the outlines of the design. By dabbing charcoal onto the holes, the rough lines of the required pattern could then be transferred onto the white tin-glaze.7

This pair of large octagonal bottle vases from circa 1700 is painted with a continuous scene of a dignitary standing beneath a parasol held by his attendant and observing two figures seated in a garden. The other side of the fenced garden shows kneeling figures and a buddha seated on a lotus flower wearing a crown and holding a bowl from which smoke rises. The decoration on this pair of bottle vases is taken directly from prints extracted from Olfert Dapper’s travelogue Gedenkwaerdig bedryf der Nederlandsche Oost-Indische Maetschappye, op de kuste en in het Keizerrijk van Taising of Sina: behelzende het 2e gezandschap aen den Onder-Koning Singlamong … Vervolgt met een verhael van het voorgevallen des jaers 1663 en 1664 op de kuste van Sina … en het 3e gezandschap aan Konchy, Tartarsche Keizer van Sina en Oost Tartarye … beneffens een beschryving van geheel Sina, which was published in 1670. Born in 1636, Dapper was a Dutch physician and writer. Although he never left his native land, he devoted a large part of his life to ethnographic and geographic research. Gedenkwaerdig bedryf describes the expeditions of the Dutch admiral Balthasar Bort along the coast of Fujian and the embassy of Pieter van Hoorn to Beijing. In addition to these reports, Dapper also included a detailed description of Chinese culture and society, often based on Jesuit material. Moreover, his work was lavishly illustrated with prints on a wide variety of subjects, including plants, traditional headwear and Chinese weapons.

It also depicted Buddhist gods, warriors and other figures, of whom several are depicted on this pair of vases. The main decoration on this pair of vases derives from an illustration of Buddha in Olfert Dapper’s publication. The interpretation of Chinese figures in many print sources is often grotesque in appearance, as the artists adapted designs for the European public. Therefore, they can be seen as a form of chinoiserie, as Delftware painters used their own ideas and combined compilations of Chinese figures from various print sources for their Delftware objects.