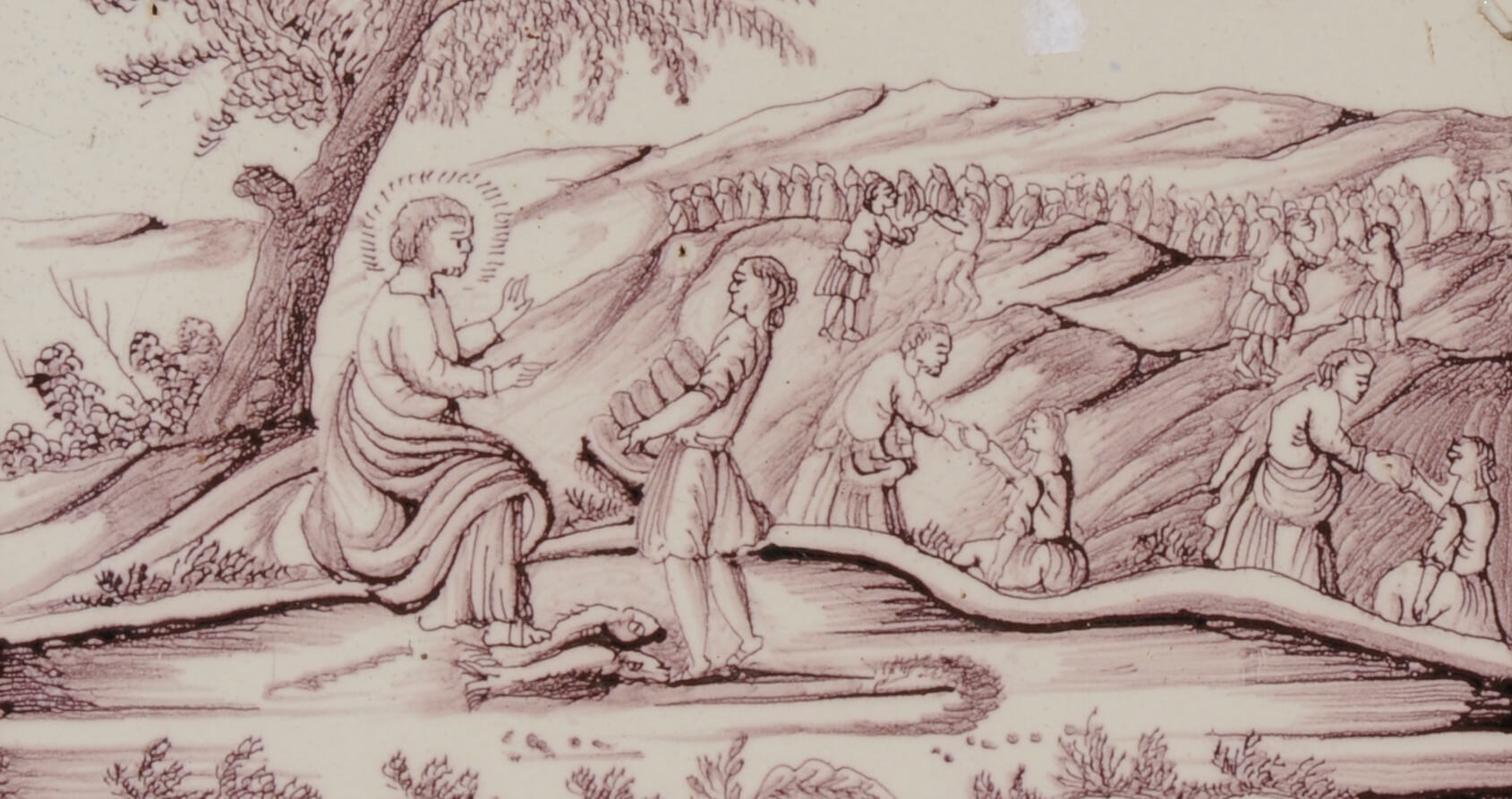 Faience was made throughout Europe, yet until around 1900, anything that looked typically Dutch was labeled Delftware. It was not until between 1910 and 1920 that a reasonable distinction was made between Dutch, German and Scandinavian material.[1]  Further, a distinction also had to be made between Dutch Delftwares, since not all Delftware was actually made in the city of Delft. The cities of Arnhem, Amsterdam, Rotterdam and Utrecht were also important hubs for the faience industry. Each of these cities, along with Harlingen, had a thriving tile industry around the mid-1680s. Besides tiles, several factories also produced tile pictures.

During the same period, around 1685, the faience industry in the city of Delft flourished. However, by 1725, the Delftware potters were affected by a downturn in the economy. Sales lagged with competition from Chinese imports and porcelain from Saxony, and Delft potters tried to combat overproduction by buying and closing factories. The tile industry was similarly transformed; towards the end of the seventeenth century, the use of decorated tiles in new town houses declined.[2]

The tile factories in Amsterdam and Rotterdam were among the few to survive, mostly because they had switched to large-scale tile and tile-picture production. Around 1730, these producers began making faience because they had the skill in place to support a new venture. Indeed, the former tile makers may have been better equipped to paint large objects than their Delft colleagues.

There were however technical differences between the faience created by tile makers and Delft factories, which generally left observable traces on the finished objects. For example, impressions of wooden laths or traces of sand from the work bench are sometimes visible on the back of the objects, and smaller objects often have the same thickness as tiles. At the former tile factories, objects were not fired in saggars, as in Delft, but were stacked on their sides between blocks of tiles. This caused one or two bare patches along the downward side of a fired object. The firing system also caused color to bleed from tiles, and traces of ash deposited on the objects. There are further stylistic differences between the two producers. Tile factory plaques often have large-scale decoration filling the entire surface, with no use made of cartouches as at Delft. In addition many objects are partially marbled and the common color combination of manganese and blue is not found in Delft.[3]

There were three tile factories active in Amsterdam between 1675 and 1840, two of which started producing faience in the Delftware style: De Twee Romeinen (The Two Romans) on the Prinsengracht and d’Oude Prins (The Old Prince) on the Anjeliersstraat.[4]  Models of shoes, figures of animals, but also tureens, tea canisters, trays and plaques, were part of the versatile assortment of these two factories. Three names of tile painters are known, and all three seemed to have worked at the Anjeliersstraat factory, where the addition of a date and initials seems to have been characteristic. One is Gerrit de Graaf, whose crabbed style characterized the factory’s production in the second half of the eighteenth century. Adam Sijbel’s signature is mostly found on objects between 1764 and 1781 (before he moved to Makkum in Friesland) and J. Van Maak probably succeeded De Graaf in 1794. This blue and manganese oval plaque was made at De Twee Romeinen on the Prinsengracht around 1745. The plaque depicts a river scene with swans swimming near a fisherman rowing his dory toward skeins in the foreground while another fisherman casts his line beneath a large tree on the bank. The plaque has many characteristic features of Amsterdam factories, such as the colors, the marbleized rim, the technical traces on the reverse, and the shape of the frame on this plaque, with its simple triangular edge.

In the city of Rotterdam various tile factories were active between 1675 and 1840, but only three introduced faience into their repertoire: the factory on the Delftschevaart, Het Wapen van Dantzig (The Arms of Dantzig) on the Hoogstraat and De Bloempot (The Flower Pot) on the Schiedamschedijk.[5]  Tilemakers’ faience appears to have flourished in Rotterdam only around the second quarter of the eighteenth century, with most of the later material being occasional pieces. These factories produced faience boxes, jugs, even puzzle jugs, sleighs, barbers’ bowls, dishes and plaques. A blue and white biblical plaque is part of an extensive group of large plaques, circa 1740-1755, which are all of the same size and shape. This example shows the Old Testament story of Rebecca at the Well, depicting Abraham’s servant Eliezer kneeling to drink water from the jug offered by Rebecca. It is unknown if this group of plaques was produced in the factory on the Delftschevaart or on the Hoogstraat, but they are all made in the tile potter’s way, modeled by hand and with a refined edge. Occasionally there are traces of a work table, which are vaguely visible. With a few exceptions, they have a sponged back and they were always fired standing.[6]

In the city of Utrecht, there were four tile factories that operated between 1675 and 1840. Two of these factories also produced faience: the factory on Agter ’t Weijstraat and the factory on the Oude Gracht by the Geertebrug.[7]  The production of faience in Utrecht seems to have occurred only after it ceased in Amsterdam and Rotterdam. It peaked around 1820. Of the other cities to produce faience, the Utrecht objects are closer to the local tiles, especially since the Utrecht plaques have no rims or just a strip of clay laid on flat or a bit of modeling to suggest a rim. The larger pieces are generally glazed on all sides, but the glaze on the back is often carelessly applied. This pair of polychrome biblical plaques, each depicting a scene from the New Testament (Jesus bidding Zacchaeus to descend from the sycamore tree and the Miracle of the Loaves and Fishes), was made in the city of Utrecht around 1800-1810. An indication that these plaques were produced in a tile factory is the series of manganese lines on the reverse of one of the pair, resulting from the atmospheric transferal of pigment from a neighboring row of manganese-decorated tiles. Another technical anomaly are the pin marks on the lower edge, revealing that these plaques were fired vertically.

Although all these objects made in the tile factories have long been reckoned to the faience made in the city of Delft, the differences are becoming more clear nowadays. Faience wares made at tile factories are all characterized by the obvious link between their decoration and that of tiles, the tones of blue and the color of the glaze, the shapes of the plaques and other objects, the quality and weight of the molded work and decoration. These distinguishing characteristics even make it possible to attribute objects to certain factories and even certain painters.