Everyone knows the blue and white vases, plates and dishes, which were made in the seventeenth and eighteenth century in the city of Delft inspired by and sometimes direct imitations of Chinese porcelain. Although the arrival of the Chinese porcelain by the Dutch East India Company in the early seventeenth century influenced Dutch pottery enormously, it was in fact not the foundation of Dutch ceramics. But then, what was the start for the well known Dutch delftware? And how were the first potteries in the Netherlands established in order to imitate the Chinese porcelain years later? In short, what are the origins of Dutch delftware? 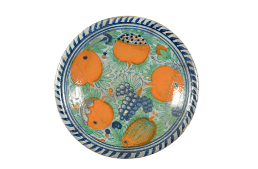 For the origins of the Delft pottery we have to go back to the early fifteenth century. At that moment very simple pottery was being produced in the Netherlands. The small pottery factories were established at places where clay was to be found and where there was a good supply of peat or wood for firing the kilns.[1] At first these potteries were only located in the west of Holland, but later spread throughout the country. In order to make these simple pottery objects, the clay, which was modelled in the desired shape, was first fired. After this first firing, the red/brown objects were sometimes decorated by painting patterns in contrasting colour schemes. The paint they used was made of watery clay or slip. Then the object was given a transparent lead glaze and fired again to make it watertight and easier to keep clean. This lead glaze was relatively expensive and therefore the early pieces of pottery were only glazed on the places which could become easily dirty, such as a spout or at the bottom on the inside.[2]

Where in the Netherlands in the early fifteenth century only very simple pottery was being made, various cities in Italy were already producing high quality ceramics. In the cities of Venice, Florence, Faenza and Urbino for example, the potters created ceramics with an opaque white, tin-based glaze on fired clay, which served as a ground for polychrome enamel painting. This South-European pottery, locally referred to as Maiolica or Faience, was richly decorated and coloured.[3] These wares were transported from Spain and Italy to the Netherlands as early as the 15th century. The finds of Maiolica and Faience in the Netherlands are however very rare, since both the laborious process of painting and the long distance the pottery had to travel, made it a luxury that could only be afforded by a small group of rich people.[4]The first Dutch Majolica examples, inspired by the southern European wares, can be dated already in the fifteenth century, but it was not until the beginning of the sixteenth century that production took on some proportion.[5] In the beginning of that century a few Italian Maiolica potters established themselves, one of them even founded a maiolica pottery, in the then most important city of the Netherlands: Antwerp.[6] With all the technical and artistic skills of these Italian craftsmen, the pottery in the Netherlands developed significantly. Not only did they introduce a highly sophisticated tin glaze technique, but they also brought with them typical Italian forms and decoration patterns. These so called ‘geleybakkers’ followed initially their original Italian tradition and after only some time they combined it with the local taste of Antwerp. A production of luxurious versions of usual everyday objects arose next to the production of floor and wall tiles. 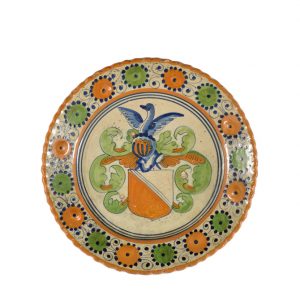 Although the city of Antwerp in the sixteenth century had a monopoly over the majolica production in the Netherlands this came to change when various potters emigrated to the northern Netherlands.[7] Most of the potters were Protestants, and because of the Eighty Years war, they were forced to seek a safer home in the north, where not only was a considerable freedom to belief, but where also the economic climate was developing favourable.[8] With the flight these potters brought their working methods and their technical expertise to the north. Although in the first half of the 16th century already a modest production of Majolica existed in Holland, the immigrants from Antwerp were of crucial importance to the further development of the luxury ceramics industry. They moved to cities like Middelburg, Dordrecht, Haarlem, Delft, Leiden en Amsterdam what resulted that in the late sixteenth century and in the seventeenth century the production of majolica slowly died out in Antwerp and Haarlem emerged as the leading centre around 1600.[9]

At first the output was limited, but after 1600 the focus increasingly shifted on to plates, dishes, porridge bowls and tiles. These new products offered the consumers a wider choice, but also provided a welcome replacement for often primitive utensils like wooden plates.[10] The early Netherlandish majolica production consisted mainly of dishes and porridge bowls covered on the front in an opaque white tin glaze, and on the reverse with a less costly transparent lead glaze. The decoration of these pieces was painted predominantly in blue, yellow, orange or ochre, green and manganese, colours derived from mineral oxides.[11] Another significant feature of Dutch Majolica is not only the clear glaze on the reverse, revealing the clay, but also the three small spots of glaze damage on the front: the spur marks. These were created by the stacking of the pieces on top of another in the kiln, separated by ceramic triangles that had to be broken away after the firing. In that process, the points where the triangles had rested would leave their mark: a small unglazed scar.

[6] At least four Italian Maiolica potters established themselves in Antwerp and one of them, Guido da Savino from Castel Durante founded a large majolica pottery there in 1508. He married a woman from Antwerp and laid the foundation of a family business that produced majolica during the whole of the 16th century. Ibidem, p. 13.

[7] Some of the potters emigrated to England, Germany or Spain, but a more significant number left for the northern Netherlands. Idem, p. 14.