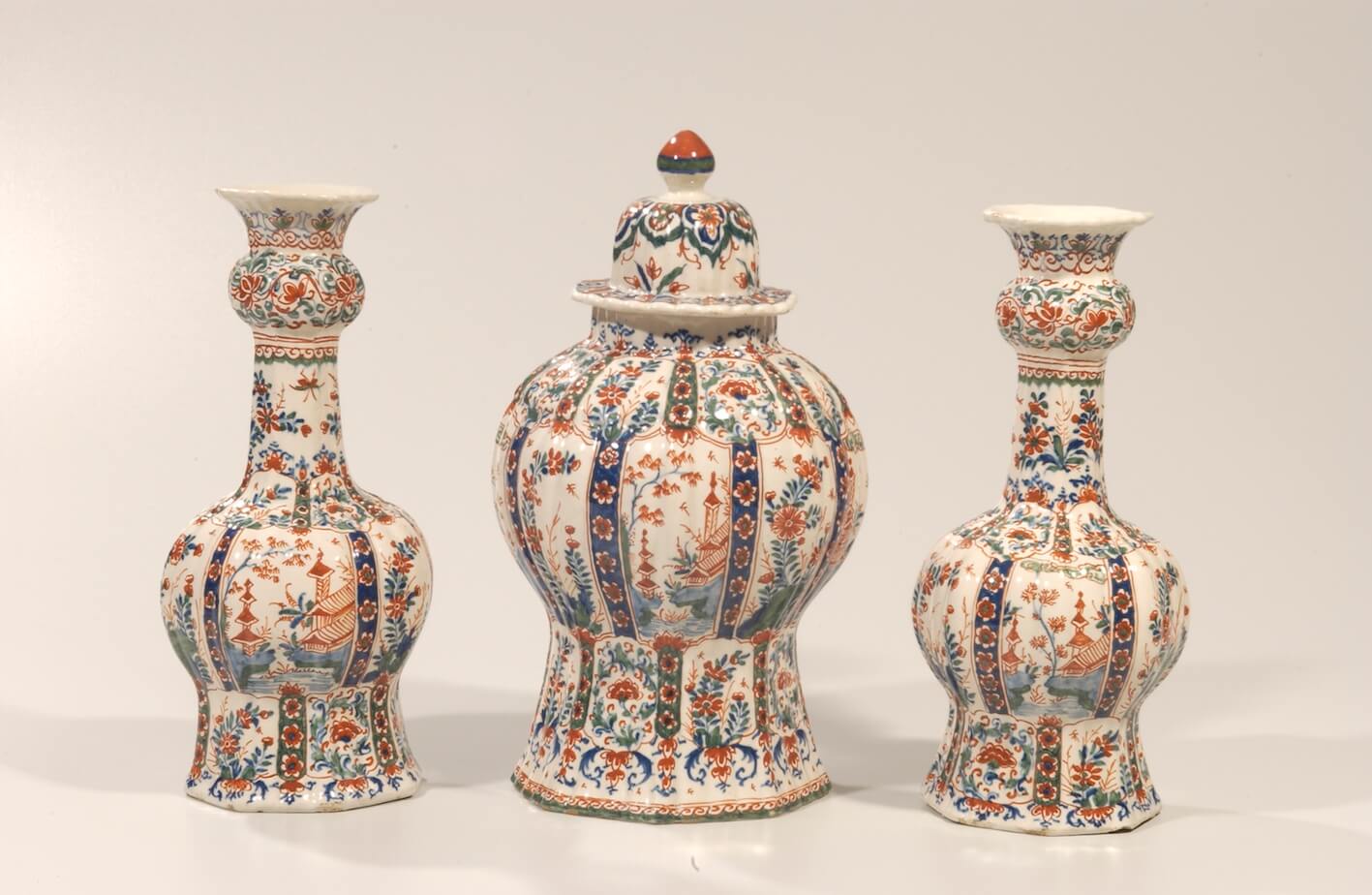 The history of garnitures is closely linked to the overall development of ceramics as a central element within the decoration of interiors. Although ceramic vessels began to be used for ornamental purpose in Florence during the Renaissance, this custom particularly spread out in Europe during the seventeenth century when the mania for imported Chinese porcelain was at its height.[1] In 1602, to regulate and protect trade with Asia, the Dutch created the East India Company (VOC). For two centuries, the prosperous company became one of the pillars of Dutch capitalism and imperialism. VOC ships not only returned with spices, but also eclipsed the Portuguese in the importations of various luxury commodities, such as Chinese porcelain. The collecting and display of these precious Chinese wares became extremely in vogue amongst the European elite. Owning Chinese porcelain was indeed the symbol of a high social status and taste.[2] Petronella de la Court, the wife of a rich Amsterdam merchant owned for example a collection of no less than 1800 porcelain objects that were displayed with the greatest care all over her house.[3] In order to exhibit those precious objects, so-called porceleinkasten (display cabinets) were created from 1700. One can imagine the stunning impression these beautiful cabinets filled with luxury would have given to the house’s visitors. 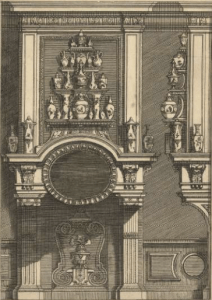 Although the first garnitures were made in Chinese porcelain, the fashion for grouping vases on mantels is a European phenomenon. In fact, the only set made by the Chinese for their own purpose was known as wugong, a porcelain altar set designed for temples. Wugongs were composed of two vases, two candlesticks and a perfume burner. Although it is commonly accepted that garnitures were inspired from this sacred objects, it has been demonstrated that the West did not know about their existence until Jean Baptiste du Halde’s Description de la Chine (1738). [4]

Garnitures first appeared in the Netherlands from the last third of the seventeenth century. With the importation of Chinese porcelain, two new shapes of ceramics were introduced to the Dutch: the jar and the cylindrical beaker. These objects were often acquired in pairs and displayed symmetrically on a mantelpiece, above a door or on an impressive piece of furnitures. Progressively, the VOC officials began to send orders with specific demands to the Chinese porcelain factories. Thus, sets of vases that were produced by the Chinese specifically in order to be exported arrived on the Dutch market. These sets, which enjoyed a great popularity, were initially made of free combinations and gradually evolved to odd numbers.[5] 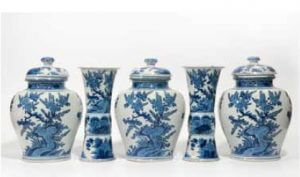 In 1644, the importation of Chinese porcelain by the VOC dramatically decreased because of civil unrests in China. Many Dutch potters viewed this as a promising opportunity to enter the market that was previously dominated by China. Imitating the style from the East, potters created a counterpart to Chinese porcelain in the production of Delftware. Thus, the Delft masters themselves began to create garnitures of three, five, seven and even more pieces, though five was the most common number. It is even recorded that Rochus Hoppesteyn, the owner of Het Moriaenshooft (The Moor’s Head) factory from 1680 to 1692 has designed garnitures comprising no less than seventeen pieces.[6]

Delftware garnitures usually combine several forms of vases decorated with matching patterns. Just like the Chinese counterpart, they were frequently placed symmetrically on top of a porcelain cabinet, on a mantelpiece or on the panel of the door. Their design and display follows the evolution of interior design in Europe. Under the impulse of renown architects such as Daniel Marot, the size of the chimney surrounds became much less  prominent while a large mantelpiece was created. The chimneys new design and its central position in the room made them ideal showcases for the magnificent Delft garnitures.[7] 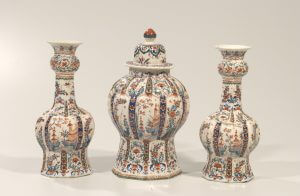 Although some models were timeless, their design and decoration were often following the latest fashion. The beginning of their production corresponds to a general keen interest for Chinese motifs and designs. At the time, rooms designed in Chinese style and decorated with chinoiseries objects were extremely in fashion amongst the European elite.[8] The shape and decoration of the blue and white five piece garniture marked for Pieter Gerritsz. Kam, the owner of De Drie Porceleyne Astonne (The Three Porcelain Ash Barrels) factory from 1700 to 1705, evoke the Chinese export vases from the Kangxi period (1662-1672). The garniture comprises three stout baluster vases and covers and a pair of gu-form beaker vases, all delicately  painted with oriental flowers such as prunus, peonies and chrysanthemums.

Over the following years, the Delft masters rivalled each other in inventiveness. Between 1700 and 1720, ‘cashmire’ pattern garnitures appeared on the market and became extremely fashionable. One source of inspiration for Delft potters was the arrival in Europe at the end of the seventeenth century of the Chinese famille verte (Kangxi period). The set of three polychrome fluted octagonal vases is marked for Lambertus van Eenhoorn, the owner of De Metaale Pot (The Metal Pot) factory from 1691 to 1721. The famous potter is known to have produced amongst the most magnificent ‘cashmire’ garnitures.

By the eighteenth century, the arrival of the rococo movement encouraged the creation of a wide range of garnitures. 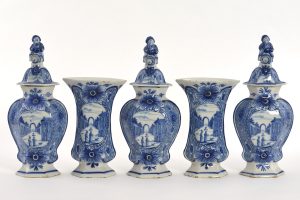 This blue and white garniture with Bacchus knob covers perfectly illustrates the rise of the  rocaille style with its rounded shape and relief scrolls. The bacchus finial distinguishes the set from the others. Common finial shapes include the foo dog or bird picking a cherry, both of oriental origins, or variously shaped rococo scrolls, but figural finials are extremely rare. Around the same time, interior designers transformed cabinet cornices from straight into serpentine. It was only logical that from about 1730-40, the next progression in this development would be the integration of wooden consoles into the cabinet cornices, the perfect stage for the presentation of a garnitures.