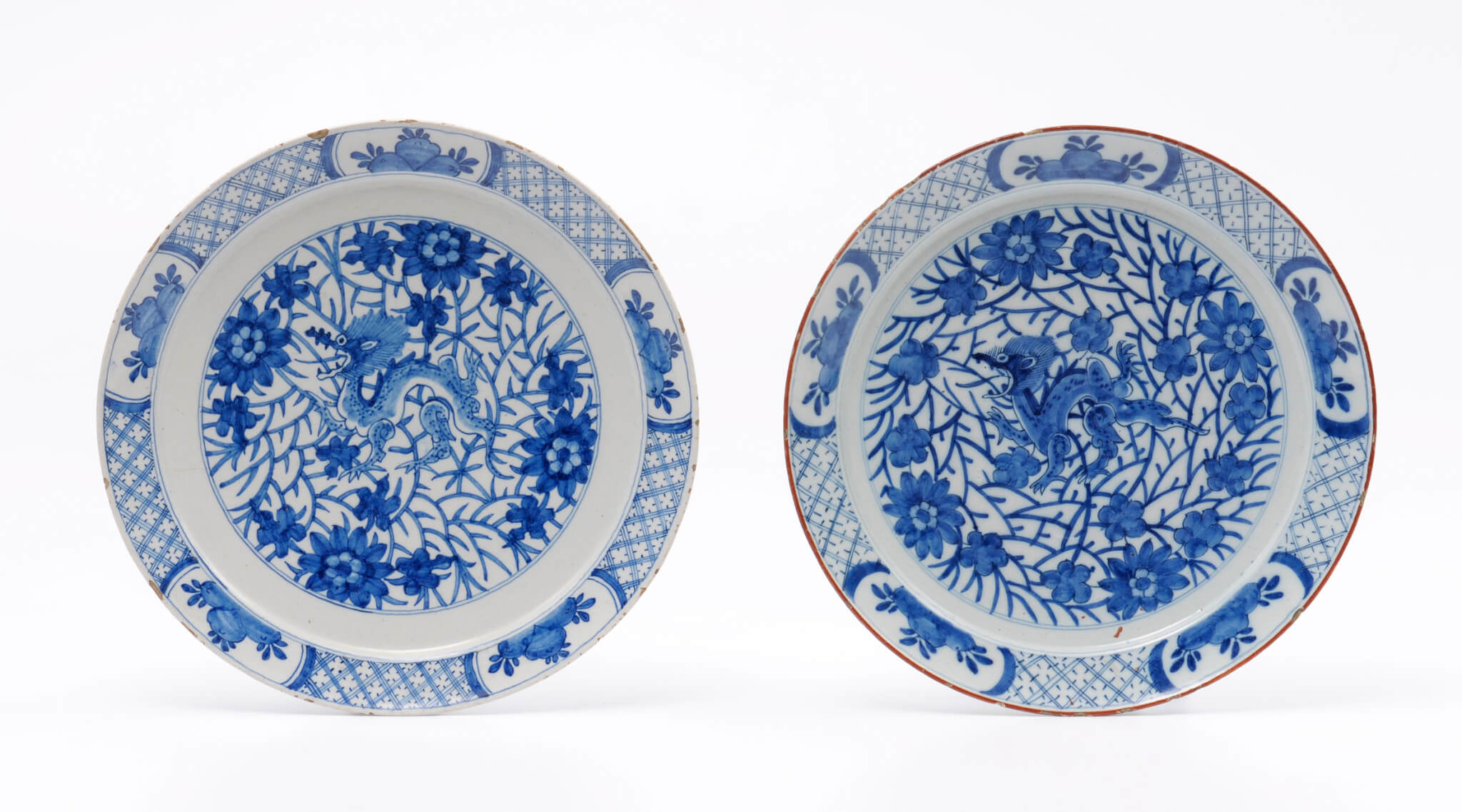 Auspicious, mythical and intriguing, the dragon was a creature that found its way onto Delftware from the Chinese porcelain and other decorative arts imported by the Dutch East India Company (VOC) in the seventeenth century.

The origins of mythical Chinese dragons are vague, however it is believed that over 4,000 years ago, China was made up of two large tribes and several smaller tribes, all of which were symbolized by an animal. When the two large tribes unified, they chose the dragon as their symbol. The Han Chinese still claim to be descendants of this beastly creature. The earliest depictions of the Chinese dragon can be found on Neolithic pottery and on the Bronze Age ritual vessels and other artifacts from the Shang (1600-1100 BC) and Zhou (1100 BC-256 AD) dynasties. According to manuscripts of the Song Dynasty (960-1279), the dragon (represented by the traditional or simplified character), was an animal composed of various parts of nine other animals, including: “the head of an ox or donkey, the eyes of a shrimp, the horns of a deer, the feet of a phoenix, and the body of a serpent covered with the scales of a fish.”[1] Assuming the best traits of the tiger, the fish, the serpent and the eagle, it was considered the most superior, powerful, wise and regal of beasts, and eventually it became associated with the emperor (the empress’s symbol being the mythical bird, the fenghuang, also referred to as the august rooster or the Chinese phoenix). 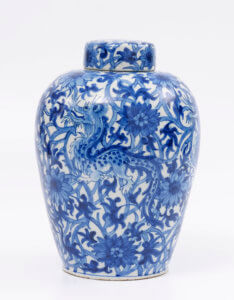 In Chinese art, the dragon is often depicted clutching or chasing after a pearl, which is emblematic of the beast’s supernatural powers. The dragon is revered as a divine creature that symbolizes good fortune, far from the terrifying and evil creature it came to represent in the West, where, through Europe’s own legends, it was the dragon-slayer who was the symbol of might, supremacy and heroism. Although the mythical dragon is a rare motif on Delftware, there are several Delftware objects with a rather similar depiction to the dragon. However, Delft potters and especially the ceramic painters imitated motifs from Chinese porcelain without understanding their symbolism.[2]

The blue and white ovoid jar and cover is painted with four scaly dragons against a ground of entangled flowering vines continuing onto the cover. The jar was made around 1700 in the city of Delft, and is marked with the letters IW. This mark is probably for Theodorus (Dirck) Witsenburgh, the owner of De Witte Ster (The White Star) factory from 1690 until his death in 1700, and then presumably used by his family as owners until 1705. This particular dragon pattern was taken from a Kangxi Period (1662-1722) Chinese porcelain, and was sufficiently popular to have been adapted on a number of different forms. On each of these objects, the dragon’s body is outlined by a trek, a darker outline pigment, which is filled in with a blue wash. 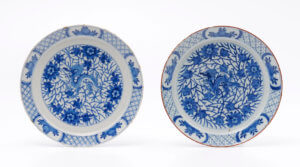 These two blue and white plates, from circa 1700 are painted in the center with a snarling dragon amidst a profusion of flowering branches. The plate with the white border is marked AK in blue for Adrianus Kocx, the owner of De Grieksche A (The Greek A) factory from 1686 to 1701. The other one is marked CD 24, which is possibly for Claes van Dyck. The Delft potters transformed the benevolent Chinese dragon into a wild and frightening chimera.[3] In each plate, the dragon has a menacing expression, with a wide-open mouth, sharp teeth, hair standing on end, and threatening claws.

This rare, six-piece set of blue and white egg cups, made in Delft around 1720, also demonstrate the popular dragon motif. They are marked D 4, which may be for De Dissel (The Pole) factory or De Drie Vergulde Astonne (The Three Gilded Ash Barrels). Since De Dissel factory was liquidated in 1702, it is more likely that the D refers to  Zacharias Dextra who owned De Drie Vergulde Astonne factory between 1722 and 1759. The brown-edged hemispherical cups and flaring circular feet are painted with a snarling dragon amidst a profusion of flowering branches, the stems and marbleized knops below a narrow dentil border. The simple goblet shape is probably derived from a glass original, itself a form taken from early metalwork in which the stem is reinforced with a central knop, also serving as a decorative element. The pattern was taken from a Kangxi Period Chinese design, and was used on Dutch Delftware as early as the late seventeenth century and continued in popularity for many years. 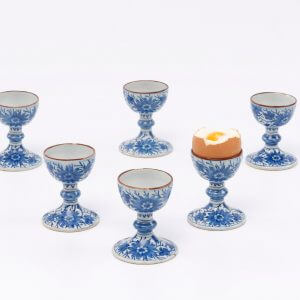 Although highly uncommon in Delftware, egg cups have existed since prehistoric times in many different shapes and designs.[4] Apparently, after the fall of classical civilization in the West (476 AD) and in the East (1453 AD), egg cups either temporarily disappeared from domestic use or continued to be used in materials that did not survive, as egg cups do not appear again until the 1600s in post-Elizabethan England. At this time, the elegant but impractical silver egg cup emerged in noble and aristocratic houses, and its humble wooden counterpart for serving hard-boiled eggs was used on the tables of the less prosperous. A century later in France, Louis XV was known to frequently eat eggs from egg cups (probably of Sèvres porcelain), and Louis XVI occasionally entertained his courtiers by “beheading” the egg in its cup with the brisk slice of a knife—an unintentionally ironic reference to his own visit to the guillotine in 1793. The singular function and relative fragility of the egg cup prevented it from spreading across Europe as a useful adjunct at the breakfast table. However, the form was reintroduced in the mid-nineteenth century, when all manner of table wares were mass produced and marketed to the rising middle class as a result of the Industrial Revolution. Until that time, egg cups, particularly in pottery and porcelain, were special orders and eighteenth-century Delft examples were nearly as rare in their time as they are today.

Since the dragon pattern was closely imitated and emulated after Chinese porcelain and because there are various sorts of Delft tableware with this type of decoration, plates and egg cups, but also salt cellars and an oil and vinegar ménage (Rijksmuseum Amsterdam, inv. nos. BK-1961-33-A, BK-1961-33-B and BK-1961-32), these objects were possibly used to complement a Chinese porcelain service.

[4] Some of the earliest examples were discovered in Minoan Crete during an archeological excavation at the Bronze Age palace of Cretan Knossos, indicating that the form was in use as early as 1800-1700 B.C. An early silver egg cup was found in 3 AD in the ruins of Pompeii, preserved under the lava and ash from the eruption of Mount Vesuvius in 74 BC a find that was not an anomaly, as among the subjects depicted on some Turkish mosaics also excavated in Pompeii were scenes of people dining, many of whom were using egg cups.