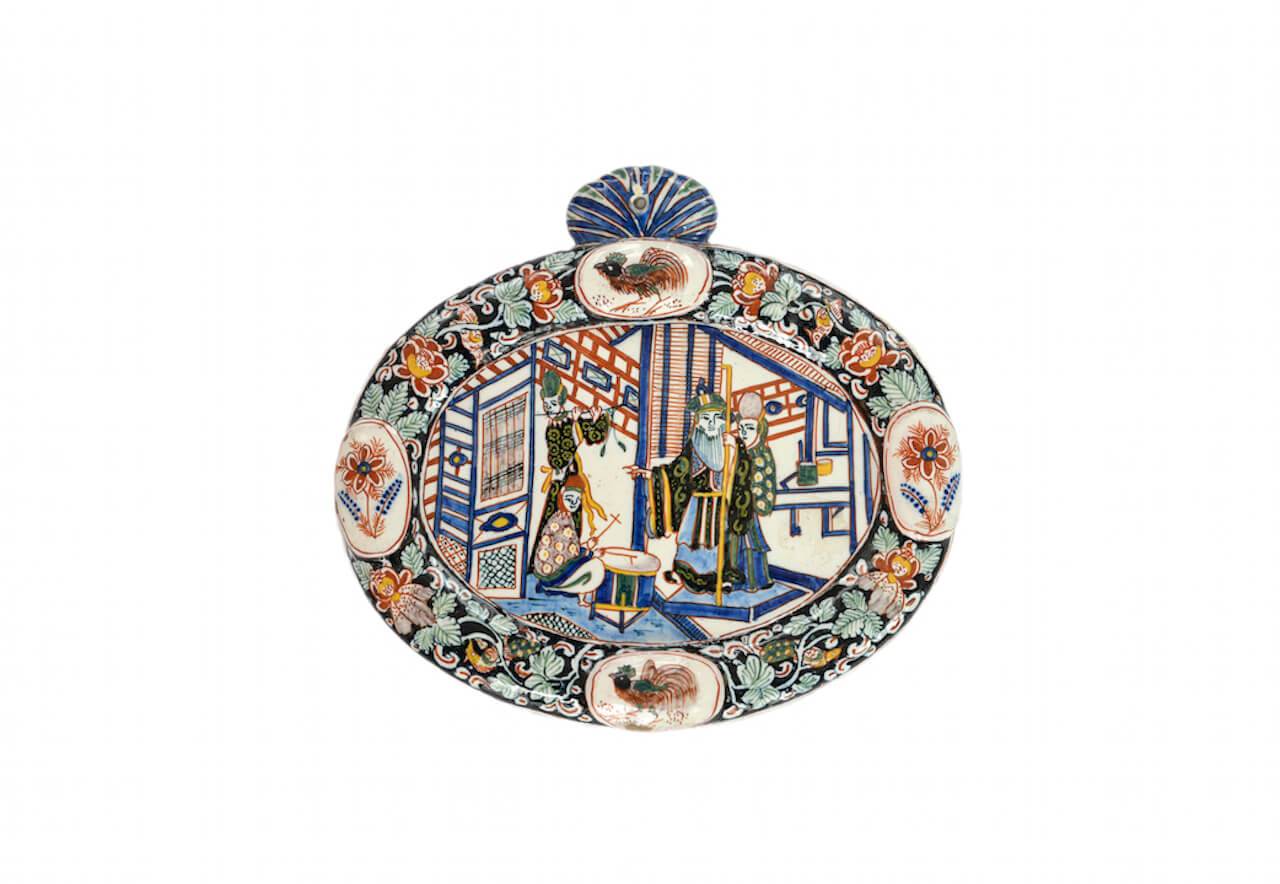 The newly formed Dutch East India Company (VOC) made its first trades with Japan during the beginning of the seventeenth century. Lacquerware was amongst the many curiosities that were imported to the Netherlands. The very delicate wooden objects were painted in dark brown or black, coated in highly glossed lacquer, and were usually richly decorated with gold. The Japanese handcraft was initially met with disinterest in the Dutch market, and importation rapidly ceased. In 1634, the orders resumed as upper class Dutch patrons welcomed the objects with great enthusiasm.[1]

The success of Japanese lacquerware ignited curiosity and inspiration in Delft potters, who simultaneously experimented with colored glazes that emulated the popular import. According to a 1649 document from the Municipal Archives, Delft potters were already using the typical green, blue, yellow, red, and black glazes. Thirty years later, a treatise published by the German scientist Johann Kinckel revealed the recipes for the fine glazes used on Dutch “porcelain.” In one of the thirty six chapters dedicated to colored glazes, Kinckel discussed the formula for the black color and chronicled the difficulty in obtaining a perfect black shine. Manganese oxide, the mineral used to obtain the black color, does not react well with some of the other colors.[2] 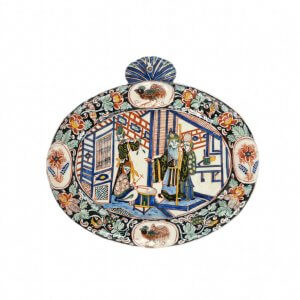 Two techniques of production are known, the first of which avoids the harmful effect of the manganese oxide. First, the biscuit is dipped into a tin glaze bath. Once it is dry, the painter executes the polychrome decoration. After its application, the painter carefully applies the black glaze around the decoration and a white reserve is left between the colors and the dark glaze, acting as a barrier against the aggressive manganese oxide. Finally, the piece would be bathed in a lead glaze to produce a beautiful shine. This method was used to execute the present work. The plaque is painted in blue, iron-red, ochre, manganese, green and black. It depicts four figures in an interior, two of them making music.The other solution was to apply the black background directly on the biscuit. Once the black glaze was dry, the painter would decorate the piece with enamel colors.

A limited number of colors were compatible with this technique, and most remaining black Deft pieces are decorated with yellow, blue and white. Red and green did not react well with the manganese oxide. To achieve these colors, a white primer coat was applied over the black glaze to avoid its toxic effect. After the piece baked, several days would follow before its success was known. One crucial factor was the kiln; if the temperature was too high, the colors would not be sufficiently stable and would merge with the black background. If the temperature was too low, the colors could appear very dull against the dark background. This challenge was confounded by the absence of a tool to accurately measure the temperature of the oven. Undeniably, the production of black Delftware was a costly process. Many potters probably made numerous failed attempts before reaching a mastery of skill in using manganese oxide.[3] The most elaborate pieces of black Delftware were made between 1691 and 1721 by two of the most prestigious factories, De Grieksche A and De Metaale Pot. De Grieksche A used the first method of production, while de Metaale Pot specialized in the application of enamel directly onto the black glaze. Today, less than seventy black Delftware pieces remain and only a small number are marked.

A taste for Chinese black ware simultaneously emerged in Europe. The mirror black and the famille noire were two new types of Chinese porcelain that were imported to the Netherlands in very small quantities. The term mirror black describes porcelain objects that are covered in a plain, yet highly reflective black glaze. The famille noire group concerns black background porcelain objects decorated with enamel paints in the same range of colors as the famille verte porcelain (green, blue, yellow and sometimes gold). While both types of Chinese porcelain reflect centuries of technical experimentation, they also demonstrate the general fascination for lacquerware.

Of the surviving examples of black Delftware, two main categories can be established. The first one, which is very similar in appearance with the Japanese lacquerware and the black mirror porcelain, is entirely covered by a black glaze and painted with gold or yellow decoration. As previously stated, the Japanese lacquerware and their Dutch copies were available in consequent quantities.[4] The source of inspiration therefore seems obvious. The second category is decorated with numerous colors such as green, red, blue, or yellow and resembles the Chinese famille noire. According to Linda Rosenfeld Shulsky, such wares were available in very small quantities. The potters who achieved such colorful and refined styles were either very creative or had privileged access to such rarities. Some of the Delft potters, such as Quirinus Mesch, had completed several trips with the VOC to the East Indies. Is it possible that they witnessed these very rare Chinese porcelains abroad?

The production of black Delftware was an artistic tour de force mastered by a small number of factories. The phenomenon was also the result of a long-held fascination with the East, and the fantasized and exotic decoration reflects the Dutch views of the time.