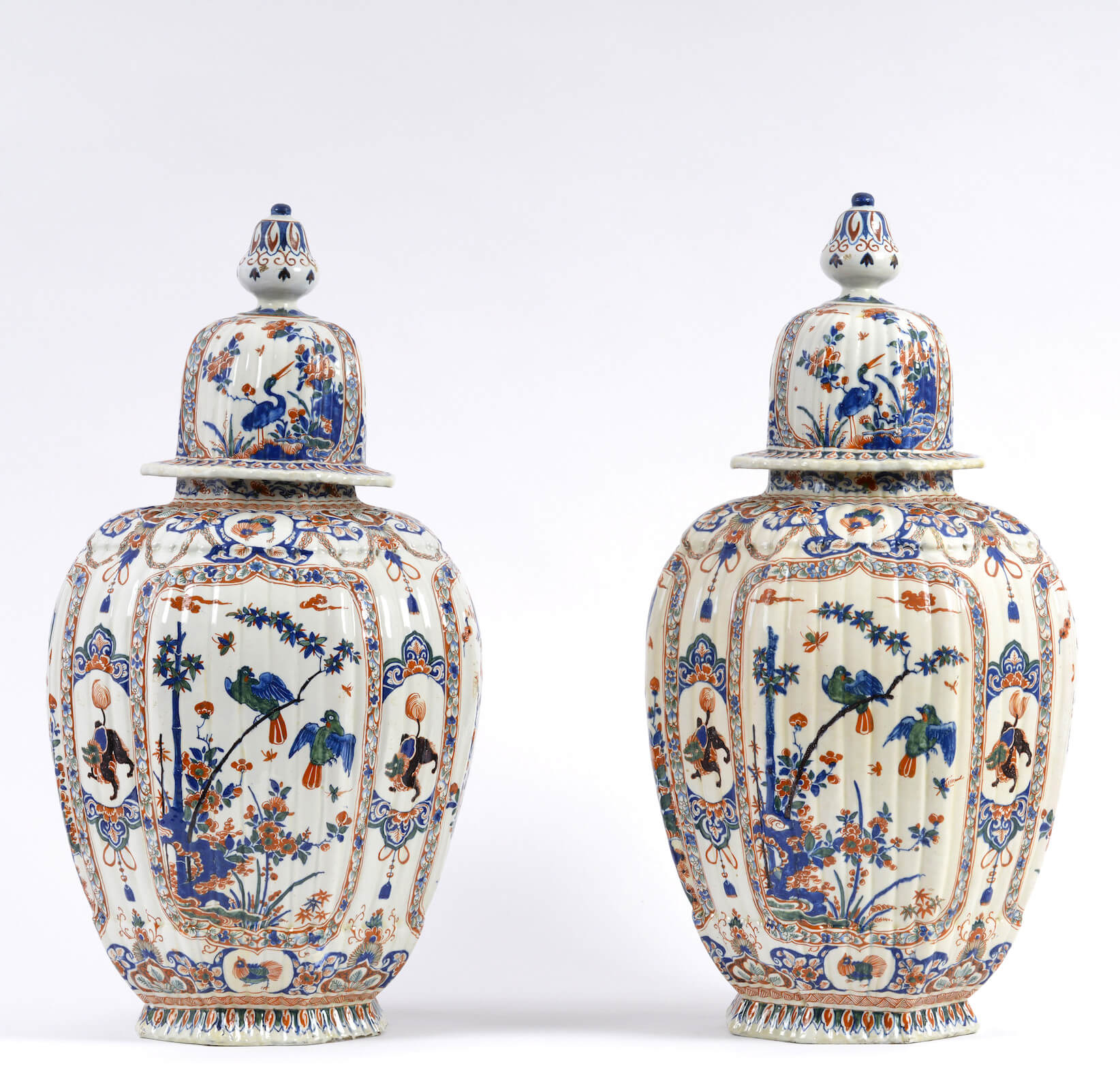 Chinese and other East Asian cultures placed great importance on the mythology of fantastical creatures such as the dragon, phoenix and black tortoise. Perhaps the most popular of the mythical beasts was the qilin, a creature that bestowed prosperity and serenity. Naturally, the qilin was portrayed on many porcelain wares in China and Japan, and was then imitated by the Delftware potters. 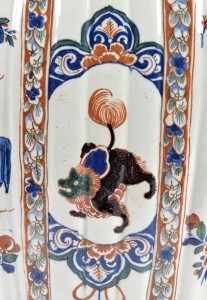 Like the dragon, the qilin is a combination of parts, comprised of attributes and characteristics of other animals. The scaled, deer-shaped body has the feet and hooves of a horse and the tail of an ox or lion. The head of the legendary creature is shaped as a sheep, a wolf, or a dragon and often has one or two horns. For Westerners, the qilin appears to be a strange, dangerous and fierce-looking animal, however its appearance is most auspicious in Chinese mythology. The qilin signifies goodwill, benevolence, gentleness and integrity. Like the phoenix, the qilin is very kind towards other living beings, careful not to harm even insects and grass.[1] To avoid harm, the creatures are reputedly able to walk on water as well as land. In Chinese mythology, the rare witness to a qilin signifies an imminent birth or death of a sage or illustrious ruler. According to legend, a qilin appeared to the pregnant mother of Confucius (6th century BC), and coughed up an inscribed jade tablet that foretold the future greatness of the unborn child. The death of Confucius was foreshadowed when a qilin was injured by a charioteer.

Delftware painters did not understand the cultural significance and mythology of the qilin figure, eschewing its meaning to achieve the sought-after exotic, oriental style of earthenware. The depiction of qilin on Dutch Delftware is found on both blue and white and polychrome colored objects, but does not appear as frequently as Long Elizas, Zotjes (dancing boys), exotic birds, dragons and other typical chinoiserie subjects. 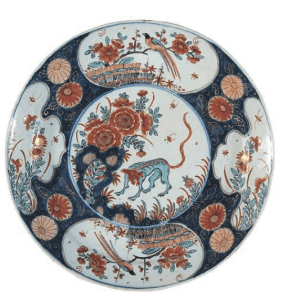 In the center of this pair of blue-ground polychrome and gilded plates the long-tailed qilin is depicted near a growth of peonies behind a pierced rock. The plates, which are marked AR for Adriaa[e]n van Rijsselberg[h] and were made around 1725 in the city of Delft, are inspired by the Japanese Imari wares. Imari porcelain was exceptionally popular in the Netherlands throughout the entire eighteenth century, and Delft potters seized the opportunity to recreate it for the Dutch market.

Imari is characterized by its rich decoration in deep blue and red with gold glazes, which was a color combination that was unknown in China at that time. Traditional Ming dynasty porcelain was primarily decorated in green and red, probably due to the scarcity of gold in China, whereas gold was abundant in Japan at that time. Qilin, or kirin in Japanese, were originally introduced to Japan via Chinese myths and legends. Over time, the Chinese and Japanese version diverged into slightly different creatures. In Japan, the kirin is considered to be the most sacred and powerful beast in contrast to Chinese mythology where it is ranked as the third powerful creature (after the dragon and phoenix). 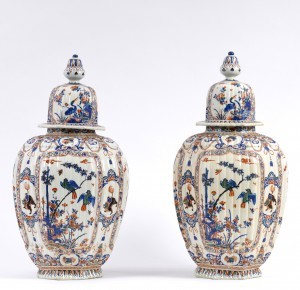 The decoration on this pair of cashmere palette reeded ovoid vases and covers from circa 1710 depicts the mythical creature in medallions between large panels with chinoiserie scenes of exotic birds in flight, or perched on flowering branches beside rock work and flowering shrubbery. The color pattern of these vases, known as the cashmere palette, first appeared in Delft potteries between 1700 and 1720. The  term, “cashmere,” was attributed by nineteenth-century collectors who recognized a resemblance between the exotic motifs and colors of the fine woolen shawls that were coveted by wealthy European ladies and the very delicate grand feu decoration of these Delftware pieces. At the crossroad between Orient and Occident, these objects reflect the intellectual and artistic environment in which Delft masters were evolving. In fact, the Delft potters ingeniously incorporated a range of artistic inspiration in their designs. The arrival of the Chinese Famille Verte (Kangxi period) in Europe at the end of the seventeenth century played a pivotal role in the creation of the cashmere palette. The delicate Chinese designs encouraged Delft potters to improve the grand feu technique; the colors became more intense and new shades appeared. The classical blue and red palette was complemented by several shades of green, which were derived from the Famille Verte wares. Black was also used in Famille Verte designs, but was seldom applied on Delftware. The few pieces of Delftware with black glazed decoration are almost always on a non-reeded ground and typically reserved for exceptional forms. Because black was a difficult color to apply on earthenware, the painters often used a dark manganese, as can be seen in the decoration of the qilin, which have a green head and iron-red colored manes and upstanding tail with a dark manganese body.