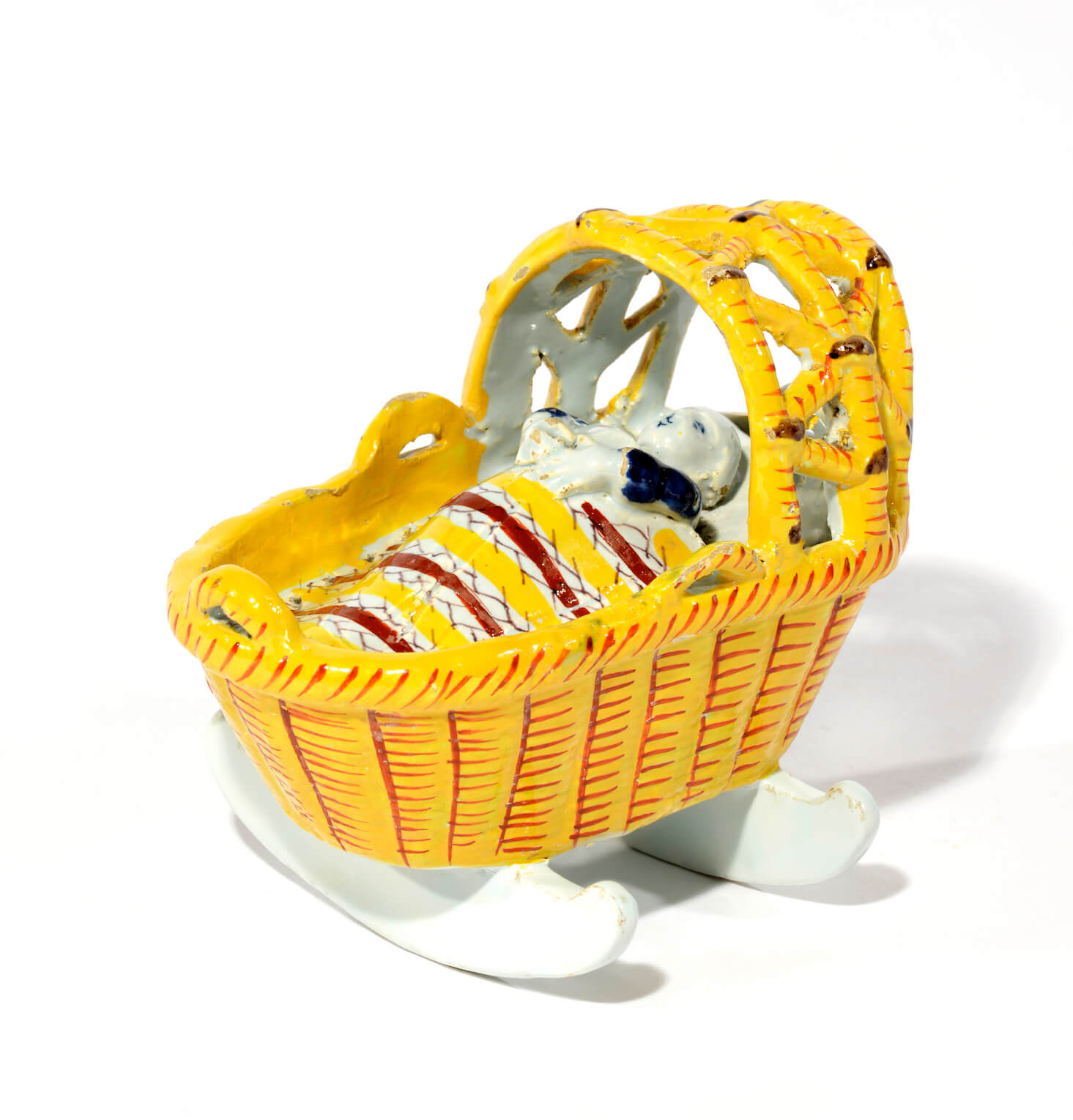 Every month we present a special object from the Aronson Antiquairs’ collection. This month we would like to show you this polychrome model of a baby in a cradle, dated circa 1765. The little baby lies comfortably in its bright yellow cradle. Of course, the yellow delineated in iron-red represents wicker, the perfect material to create cozy baskets. In the seventeenth and eighteenth century not only cradles as represented in this miniature model were produced from wickerwork, but also other furnishings for the nursery room were made of the bendable willow twigs. For example, fire baskets in which a bucket with hot coals could be placed, that functioned both as a heat source and to dry the wet baby clothes. Further, the nursing mother was seated on the floor in front of the fireplace in a bakermat, a flat basket with low edges at the side and a high back. She could comfortably take care of the new born and change him or her on her lap. The engraving by Willem van de Passe (ca. 1624), Woman changing a child, shows a baker mat and a cradle. The cradles would have had a cloth over the hood, to protect the child from the cold and draft. When raised on wooden rockers, it could be moved back and forth by the mother using an attached rope, a so-called wiegekoord. 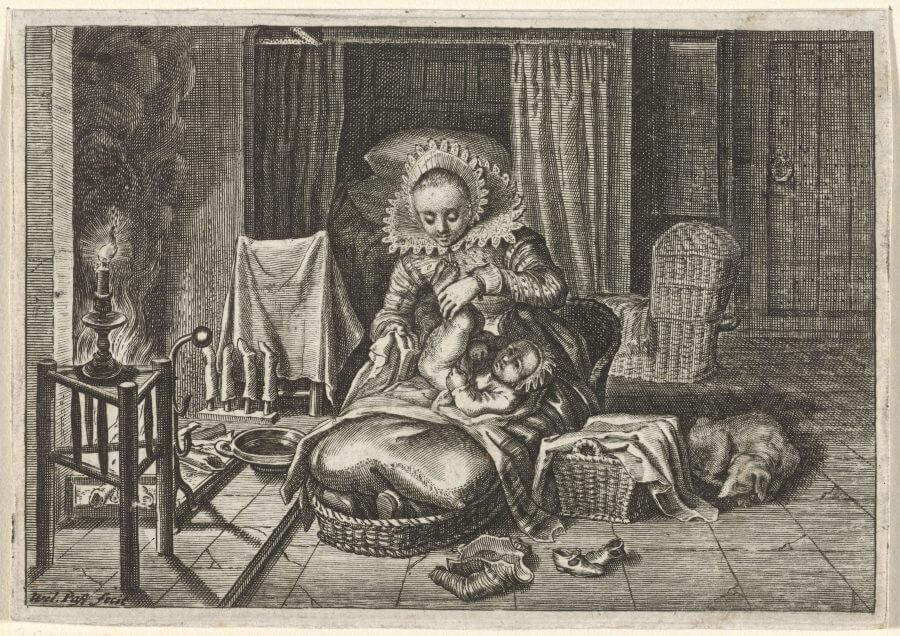 Little models of cradles, fire baskets and highchairs were perfect as a gift to celebrate an engagement or a wedding (symbolic of the function of marriage and the wish for progeny) or especially a birth. They probably were made by a number of Delft factories over a period of many years, but it is interesting that, for example, the 1803 inventory of the Drie Posteleyne Astonne (Three Porcelain Ash Barrels) factory, of which the transcription is published in Van Aken-Fehmers 2001, p. 222, includes “7 vuurmantjes, 1 kintje in de wieg en 2 kinderen in de kakstoel” (“7 fire baskets, 1 child in the cradle and 2 children in the high chair”.)

The miniature house, or the dollhouse, was not a house to play with. In Holland where these exhibits of wealth were called ‘cabinet houses’  were a serious pastime for a lady of the elite. Carefully fashioned as their own home and filled with furniture, figures and all sorts of utensils, they formed wonderful documents. They not only show how the interior must have looked like, but they also give a remarkable insight in where the household objects were kept. In some cabinet houses, tiny models of cradles, baby’s in high seats and other figures were displayed (or kept save) on the top shelve of the linen cabinet. They were executed in glass, the only medium to work so detailed in, but they have the same shape as the present Delftware cradle with baby. It is well possible, that the lady of the house stored her treasures with an important part of her dowry, the bed and table linens.

Polychrome Model of a Baby in a Cradle
Delft, circa 1765

The yellow wicker cradle delineated in iron-red and with an open trelliswork hood at the head heightened in manganese, the baby inside with her head resting on a square pillow and wearing a robe with blue sleeves revealing her hands clasped over the top of the yellow, iron-red striped and manganese herringbone-patterned coverlet.