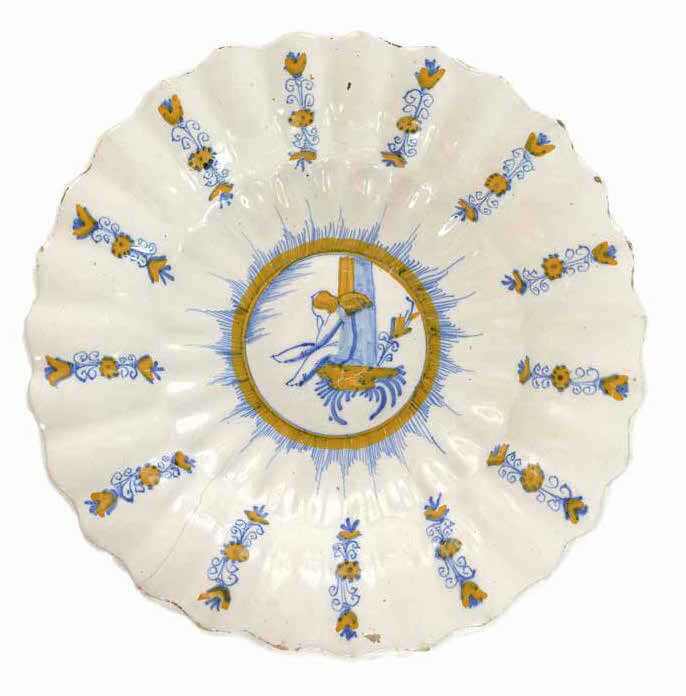 Every month we present a special object from the Aronson Antiquairs’ collection. This month we would like to show you this polychrome gadrooned dish, which was made in the Northern Netherlands around 1650. Decorated in the stile compendiario, this tin-glazed dish is inspired by the so-called Straetwerck, Italian tin-glazed earthenware which was transported through the Straits (‘straet’) of Gibraltar.

The gadrooned dish is painted in blue, yellow and ochre in the center with a seated angel leaning against a post on a small ground in a roundel. This color scheme and type of decoration is typical for Straetwerck, Italian tin-glazed earthenware, which is mainly from Liguria and is named after the Straits (straet) of Gibraltar through which it was transported. The objects are decorated in the stile compendiario, a style with simple, schematically painted, polychrome decorations, mainly in orange, yellow and blue. The central decoration, often a cupid on a bit of land, is usually framed by a stylized garland.

The Dutch producers of tin-glazed earthenware imitated this Straetwerck especially in majolica, as they did with Chinese porcelain. These objects are often attributed to the workshop of Willem Jansz. Verstraeten in Haarlem, but there were more workshops that produced these wares in the Republic. Therefore it is difficult to ascribe this type of majolica with certainty to a specific production center.[1]

Painted in blue, yellow and ochre in the center with a seated angel leaning against a post on a small ground in a roundel, the pleats decorated with stylized yellow flowers and blue foliage scrolls.