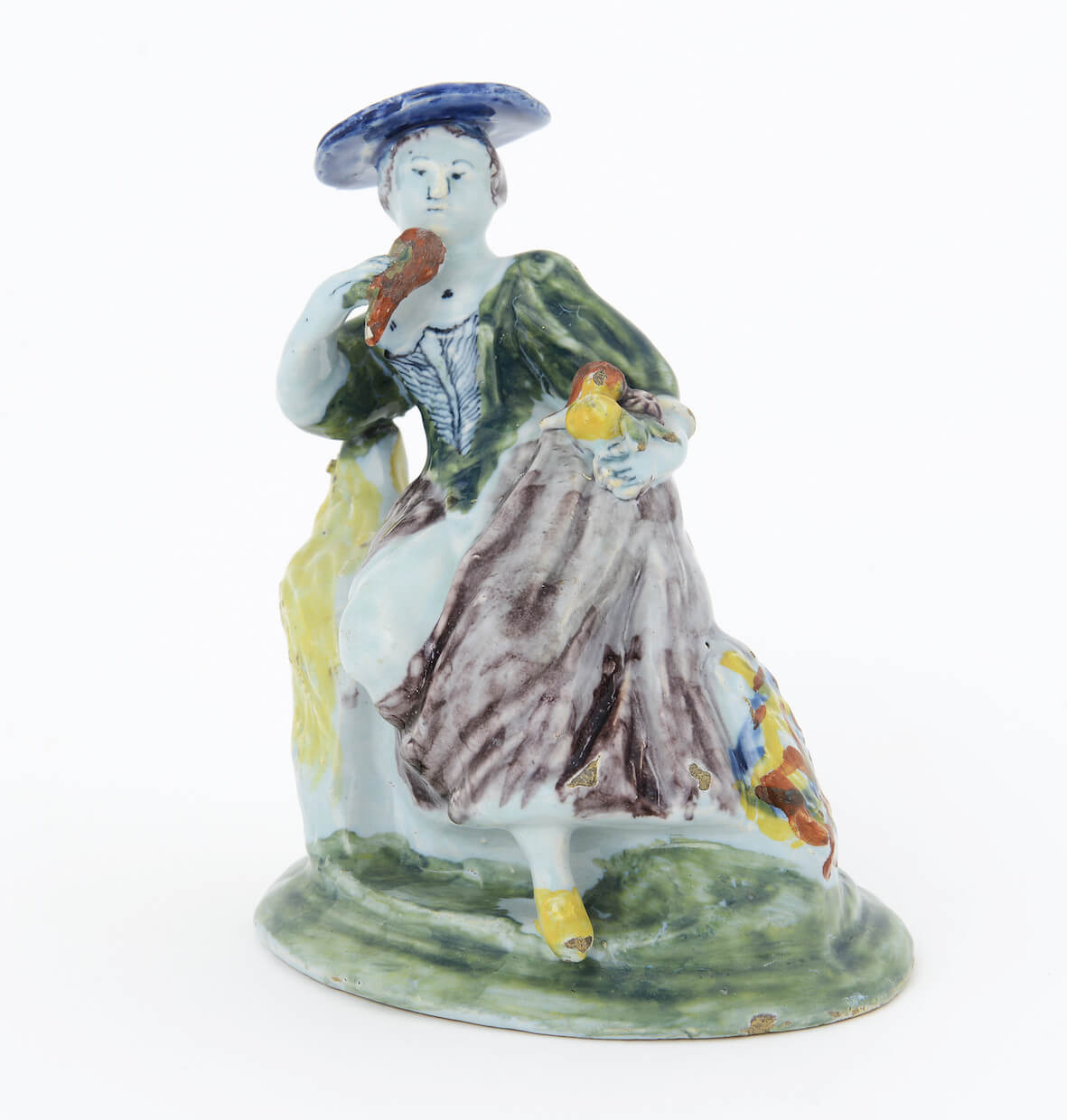 Every month we present a special object from the Aronson Antiquairs’ collection. This month we would like to show you this polychrome figure of a seated lady, from circa 1750. The figure is marked with a claw and numeral 3 in manganese for De Klaauw (The Claw) factory. Wearing a blue broad-brimmed hat, leaning against a sheaf of yellow wheat, and holding three fruits in her hand and eating a carrot, she possibly represents the allegorical figure of ‘Summer’.

In the Delft factories not only ‘Summer’ was produced, but the whole set of ‘The Four Seasons’. The Four Seasons are an ancient decorative motif in the arts. Usually each season is represented as an allegorical figure bearing traditional iconographic symbols. The Delft figures of ‘Spring’, ‘Autumn’ and ‘Winter’ all seasons were modeled in the same way as the present figure of ‘Summer’: as men and women holding specific attributes of the season. As can be seen in this figure ‘Summer’ is often shown with sheafs of wheat to illustrate the labor and product of the wheat harvest, which is done in the summer. Wheat can either be planted in the winter or the spring, to be harvested at the beginning or the very end of summer.

Another figure of ‘Summer’ in the Lavino collection is modeled as a lady wearing a broad-brimmed hat, a décolleté dark rose bodice with a yellow stomacher, and a dotted and blossom-patterned white skirt. Instead of fruits, she is holding a sickle and a sheaf of yellow wheat.[1] ‘Spring’ on the other hand is possibly represented by a gentleman holding a basket of flowers and a trowel.[2] A gentleman wearing also a broad-brimmed hat and holding a yellow wicker basket of blue grapes and green leaves on his lap, represents ‘Autumn’. The allegory of ‘Winter’ is often modeled as a lady holding a flaming blue, iron-red and yellow brazier on her lap.

Because of the relatively unrefined nature of the clay and the thickness of the tin glaze that tended to obscure finely sculpted details, the production of figures in Delftware was somewhat limited. The earliest figures, appearing at the end of the seventeenth century, were based largely on Chinese blanc de Chine porcelain or famille verte biscuit prototypes, but occasionally also on small bronzes, which continued to serve as models throughout the eighteenth century.

By the early 1740s, sufficient numbers of elegant German porcelain figures, primarily from Meissen, were being imported to the Netherlands that the Delft factories had little call for their own less sophisticated versions. However, when the Seven Years’ War (1756-63) erupted, causing interruptions in the production of many of the German porcelain factories, resulting in a severe reduction of the porcelains available in Holland, the Delft factories rose to meet the demand. Many of the resulting figure, animal and bird models produced in Delft during the prolific third quarter of the eighteenth century were based on slightly earlier Meissen models, and while they embrace the spirit of the Rococo Period, they equally exude an underlying earthiness and a characteristic Dutch charm and insouciance.

Polychrome Figure of a Seated Lady
Delft, circa 1755

Possibly allegorical of ‘Summer’ from a set of ‘The Four Seasons,’ wearing a blue broad-brimmed hat on her manganese hair, a green bodice with a blue stomacher above an aubergine skirt revealing one yellow shoe, modeled seated on a blue, iron-red and yellow marbleized rock, leaning against a sheaf of yellow wheat, and holding a carrot in her right hand and three fruits her left hand, on a green stepped oval base.

The first Dutch Art & Antiques Fair is created by members of the Dutch dealers association Koninklijke VHOK. More information is available on www.thedaaf.com.

The first Dutch Art & Antiques Fair is created by members of the Dutch dealers association Koninklijke VHOK. More information is available on www.thedaaf.com.