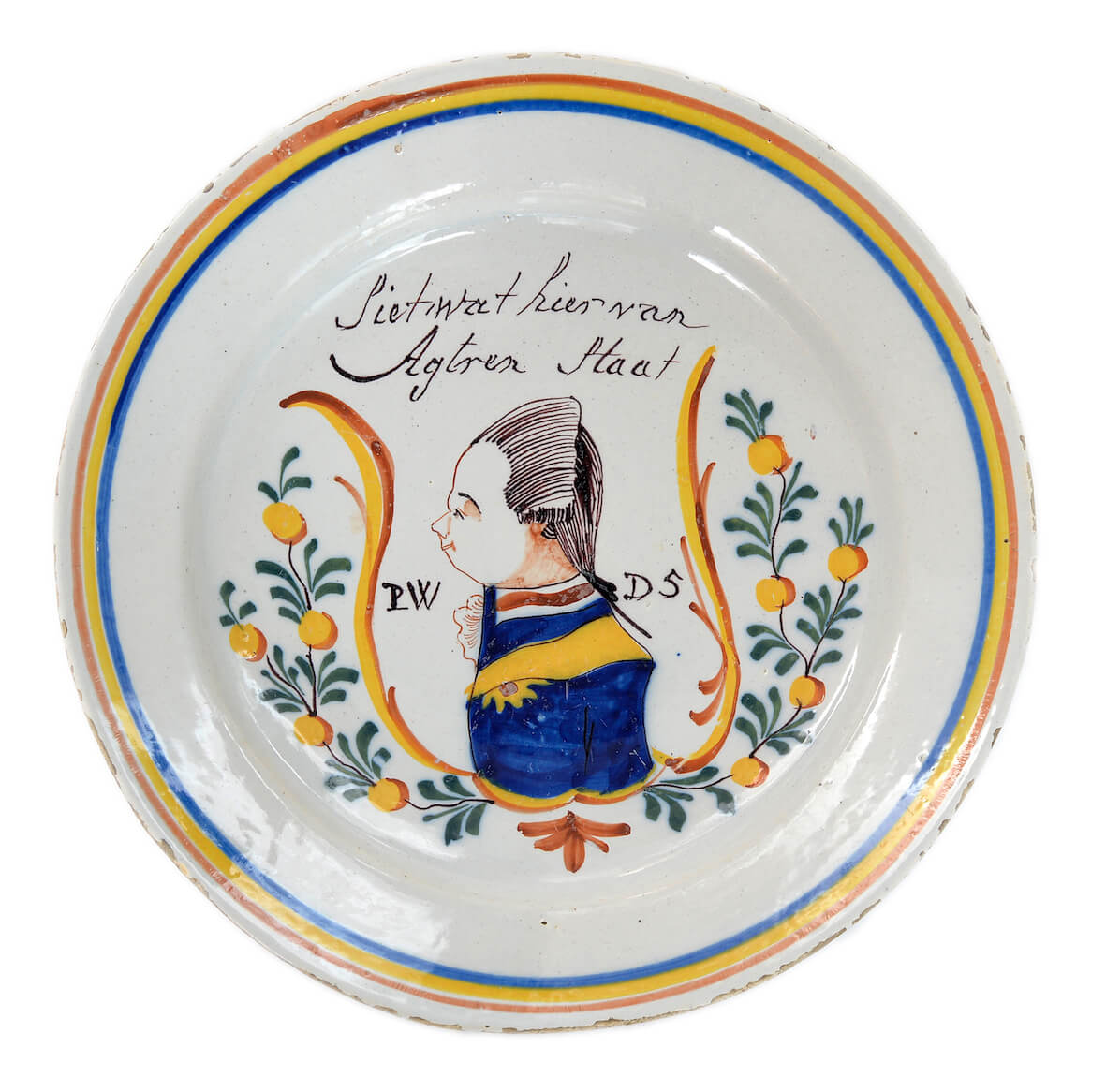 Delftware objects displaying Dutch monarchs, royal coats of arms and symbols of the Royal House, such as the orange tree, are known as Orangist Delft. Amongst the first Orangist Delft were the painted tile portraits of Prince Maurice (the stadholder of all the provinces of the Dutch Republic except for Friesland from 1585 to 1625), Frederick Henry (the sovereign Prince of Orange and stadholder of Holland, Zeeland, Utrecht, Guelders, and Overijssel from 1625 to 1647) and William II (the sovereign Prince of Orange and stadholder of the United Provinces of the Netherlands from 14 March 1647 to 1650).[1]

The production and popularity of patriotic Delftware grew during the reign of William III, who was the sovereign Prince of Orange from birth, stadholder of Holland, Zeeland, Utrecht, Guelders and Overijssel from 1672, and King of England, Ireland, and Scotland from 1689 until his death. Plates, dishes, jugs and jars all celebrated the glory of the stadholder during his long reign. 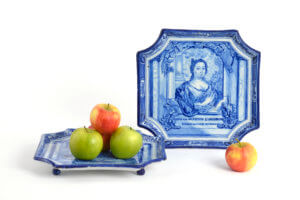 Owning and displaying Orangist Delftware was a strong symbol of allegiance towards the monarch. In fact, these depictions became more frequent as the political position of the stadholder was challenged. For example, in 1650 after only three years of reign, William II died. Eight days later, his son, William III was born. Too young to govern, the States of Holland removed the royal from power until 1672. This marked the first stadholderless period.[2]

In 1672, the Dutch Republic was under attack by the French and the Kingdom of England, and restored the prince to his stadholder position. During this tumultuous period, the Orange partisans expressed their unwavering loyalty by adorning their houses with the symbols of the Kingdom. 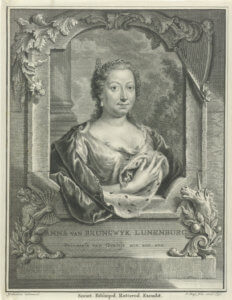 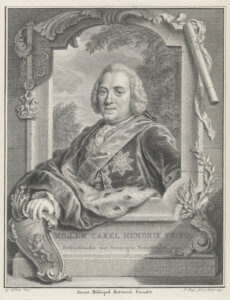 A pair of blue and white royal portrait trays from circa 1750 shows the bust-length portrait of Princess Anna van Brunswijk Lunenburg and Prince Willem IV. Princess Anne is elaborately coifed and wearing pearl earrings and a lavish gown with an ermine fur mantel. Prince William IV wearing a short light wig, a sash and mantel with ermine fur collar, and the Order of the Garter on his embroidered uniform, holding the coat of arms with a lion rampant with sword and a bundle of arrows. Both portraits are placed in a window opening decorated with several symbolic items, such as orange branches, a lion holding a bundle of arrows, the head of a unicorn in the portrait of Princess Anne, and a chain with a pendant in the form of Saint George and the dragon and a command staff having on a ribbon in the portrait of Prince William IV. These portraits of Prince William IV and Anne were taken directly from an engraving and etching dated 1750 by Pieter Tanjé (1706-1761), after a drawing by Gerard Sanders (1702 – 1767). Sanders, born in Germany, worked as a court painter in the service of elector Johann Wilhelm of the Palatine in Düsseldorf.

Prince Willem IV (William IV, formerly called Karel Hendrik Friso or Charles Henry Friso [1711- 51]) was born in Leeuwarden, the son of Johan Willem Friso, Prince of Orange and head of the Frisian branch of the House of Orange-Nassau, and the Landgravine Marie Louise of Hessen-Kassel.[3]  Because his father had died six weeks before his birth, the infant prince succeeded him immediately as Stadtholder of Friesland and Groningen, and in 1722 he was elected also Stadtholder of Guelders. However, his mother served as regent until 1731. In 1747, the States-General of the Netherlands appointed the Prince as the first hereditary General Stadtholder of the seven United Provinces, prompting his family to move from Leeuwarden to The Hague. In 1733, the Prince became the 549th Knight of the Order of the Garter, the highest of the British orders. The following year, he married the Princess Royal, Anne of Hanover (1709-59), the eldest daughter of King George II of England (1683-1760), who became the Princess of Orange.[4]  The couple had five children, of whom three survived beyond birth. The youngest, William V, Prince of Orange (1748-1806), succeeded his father, who died at age 40 in the Huis ten Bosch in The Hague. Although initially popular, the brevity of William IV’s reign left him little time to leave a legacy of any major accomplishment. His reputation was also affected by his paucity of experience as either a statesman or a businessman (although he was a Director-General of the Dutch East India Company). However, he is remembered for abolishing the practice of indirect taxation. 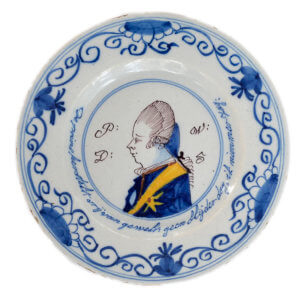 The tradition to adorn the house with symbols of the Kingdom continued and reached its height during the third quarter of the eighteenth century when Prince William V was preparing to ascend the crown.[5]  William V was the last stadholder of the Dutch Republic. He was unable to prevent the fourth Anglo-Dutch war that resulted in the loss of many of the Dutch colonies. The economic fragility of his reign aroused hostility in the Patriots, a groups of discontented burghers who wished to restore the republic to its former glory.[6]  In 1785, an open conflict between the the Orangists and the Patriots forced the Royal Couple to flee The Hague. With the help of Prussian troops, the Prince regained control of the country and restored his authority in 1787. This polychrome Orangist plate, from circa 1785 probably refers to this event. The plate, painted in blue, manganese , iron-red and yellow shows in the center the royal portrait of William V depicted in profile. The portrait is encircled by the verse ‘De prins herstelt; vrij van fewest; geen blijder dag; ik nimmer zag;’ (The prince recovers, free of violence, there was no luckier day I ever saw). However, only a few years later, France declared war with the United Provinces because of their alliance with England. In 1795, William V had to flee again with his family from Scheveningen to England.[7]  A few weeks later, the Prince was dismissed from his functions. 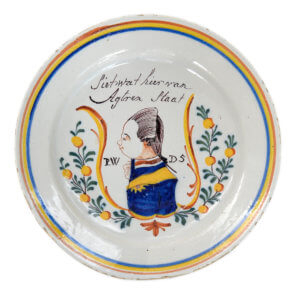 During the conflicts, the Orangists and the Patriots used the decorative arts as political propaganda. On Delftware, the Patriots depicted William, Wilhelmina and their children as wild pigs, trampling over the rights of the Dutch people. Meanwhile, the Orangists called the rebels mad dogs and madmen and kept depicting Prince William V on the Delftware objects. These depictions of William V and symbols of the House of Orange are mostly found on dishes. This polychrome Orangist charger, from circa 1790, shows the royal portrait of William V depicted in profile with an iron-red delineated face wearing a manganese wig and blue uniform with an yellow and iron-red sash. The portrait is flanked by the letters ‘PWD5’ for Prins Willem de Vijfde (Prince William the Fifth. Above this imagery is the verse: ‘Siet wat hier van Agtren Staat’ (see what is written on the reverse), a text that refers to the verse on the reverse which states: ‘Bit voor u Vorst wenst hem Geen kwaat’ (Pray for your Prince, do not wish him any harm). Looking at the objects that remain today, it seems that Orangist Delft was the most popular, likely due to Delft being a royalist city.